Results from Top Tropicals online store
5561 Arundina graminifolia - Bamboo Orchid, Bird Ground Orchid...  more
Arundina graminifolia - Bamboo Orchid, Bird Ground Orchid
Bamboo ground orchid produces pinkish flowers at the top of tall cane-like pseudobulbs. It's the only species in the genus. The plants are quite tall; they'll reach at least hip level, possibly over your head, and their vegetative resemblance to bamboo can be uncanny. The long pseudobulbs have leaves alternating along their length, similar to Epidendrum orchids. The flower stems, which emerge from the top of the canes, produce several flowers sequentially, so that there will be one at a time over an extended period. The flowers are white with a purple-to-pink lip, and shaped similarly to a Cattleya orchid flower. They are 2-3 inches across, and can appear for much of the year, especially in summer.
See video about Ground Orchids. 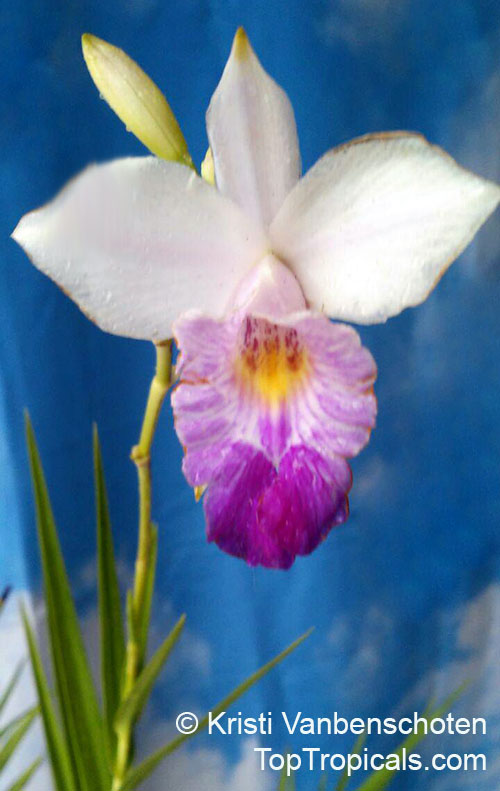 Q: What is a grafted plant?

A: Grafting is a method of vegetative (or asexual) propagation where a piece of one plant (scion) selected for its flowers or fruit and containing the desired genes to be duplicated is inserted into a piece of another plant (rootstock), with a strong vigorous root system, usually a seedling.

Benefits of the graft: 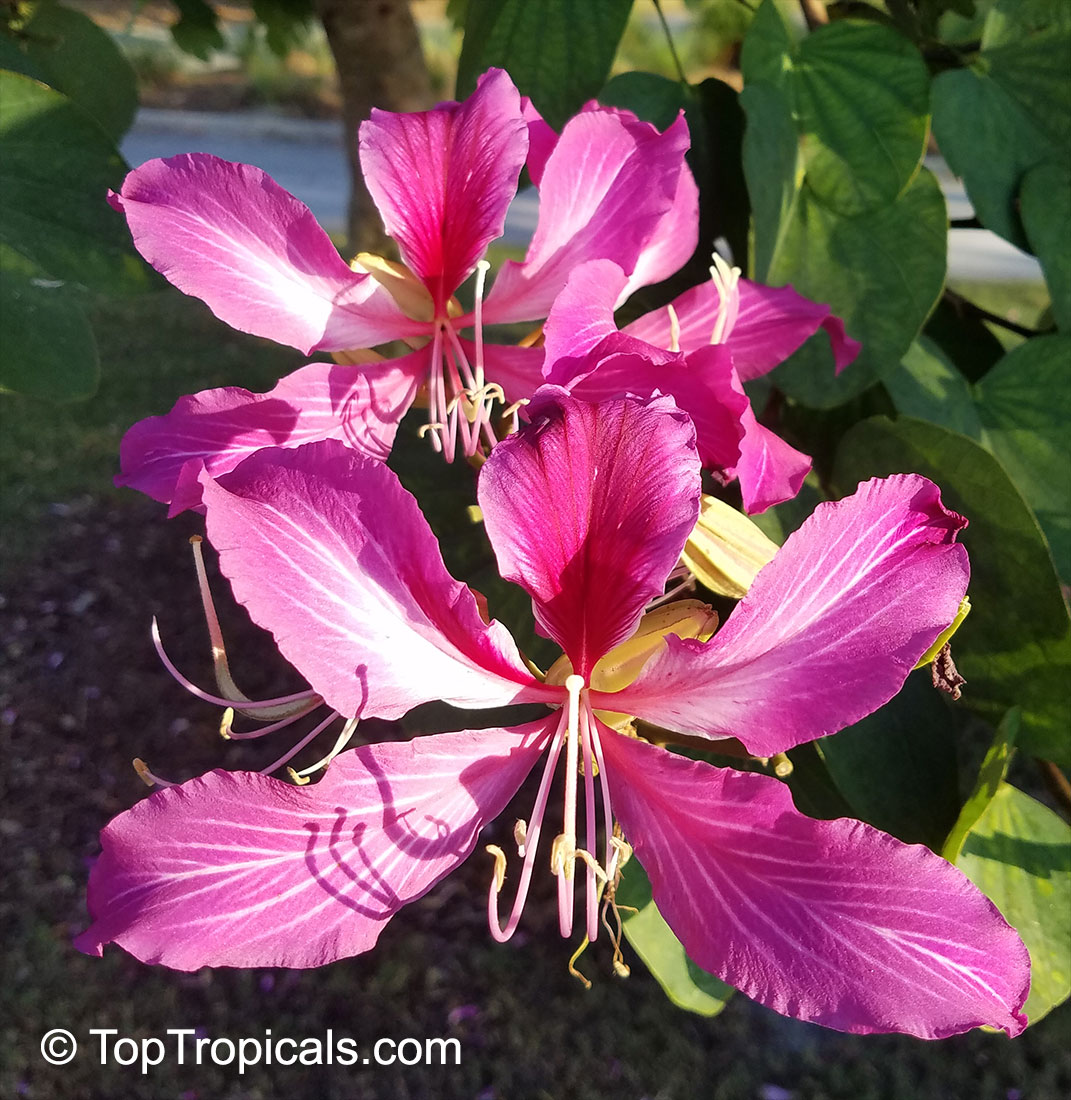 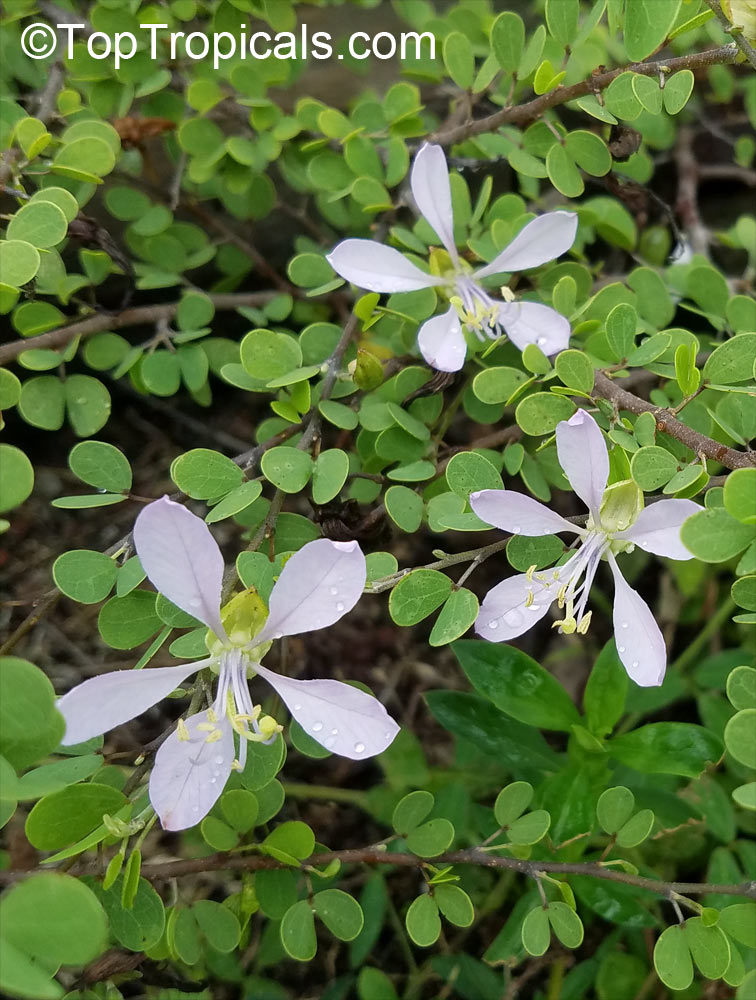 Grown in
6"/1 gal pot
3 plants in stock
$72.95
Read reviews
6061 Bauhinia madagascariensis - Red Butterfly Orchid Tree...  more
Bauhinia madagascariensis - Red Butterfly Orchid Tree
This rare plant is one of the most spectacular Orchid trees in cultivation. Flowers and extremely showy, look like scarlet butterflies with bright yellow stripes at the base of each petal. It grows into a small tree or bush. Plant in in full sun to get the most of its flowering season. Rare collectible species. Fast growing. 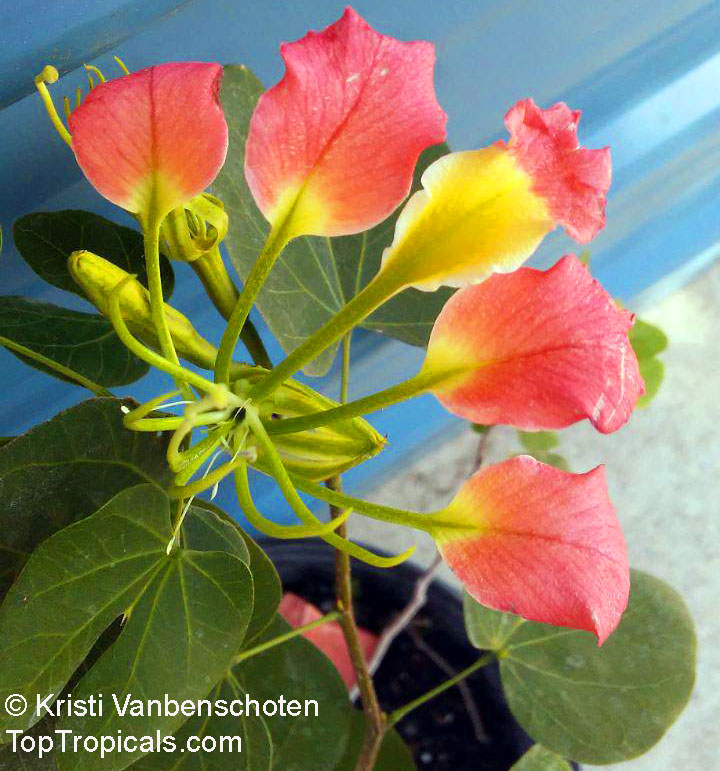 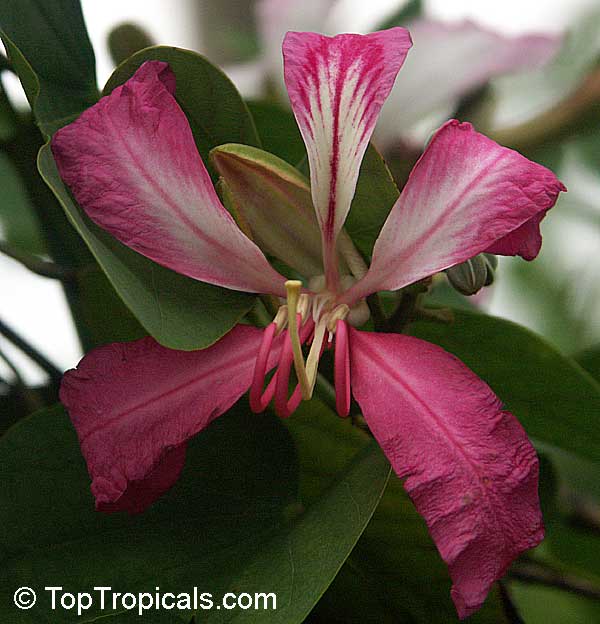 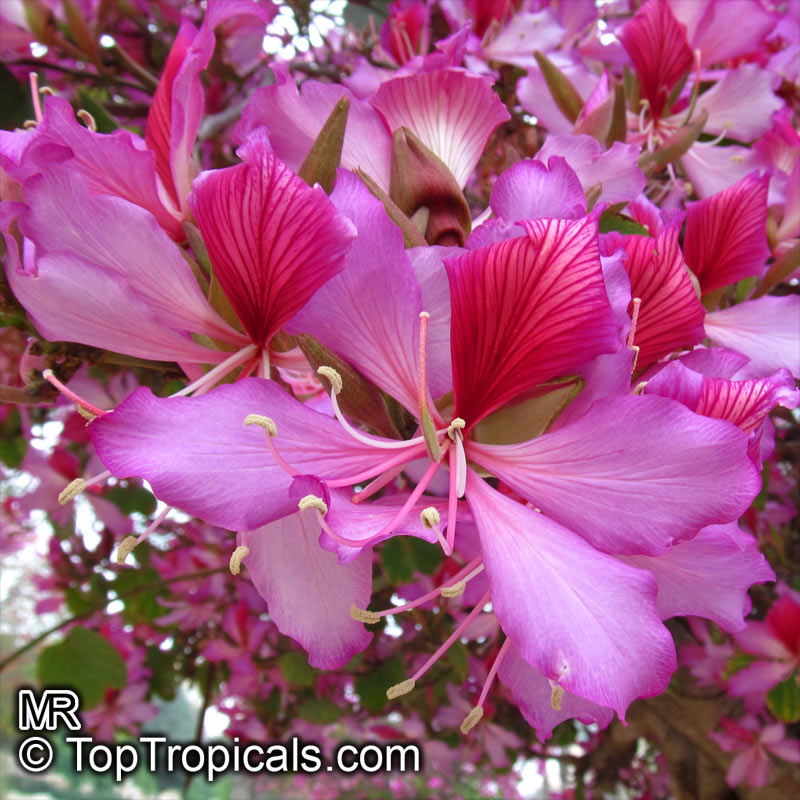 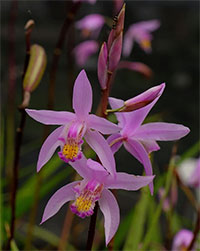 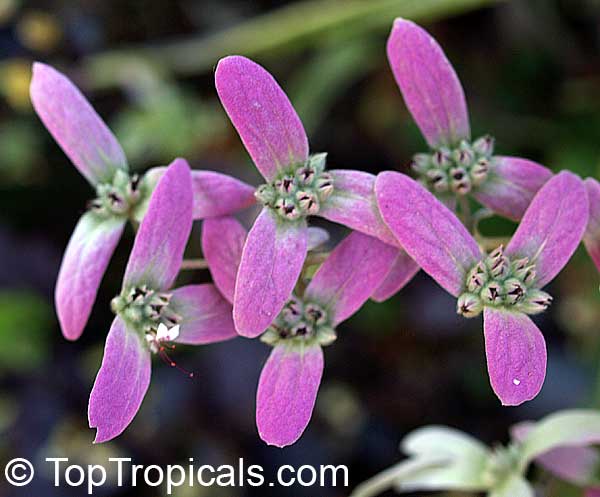 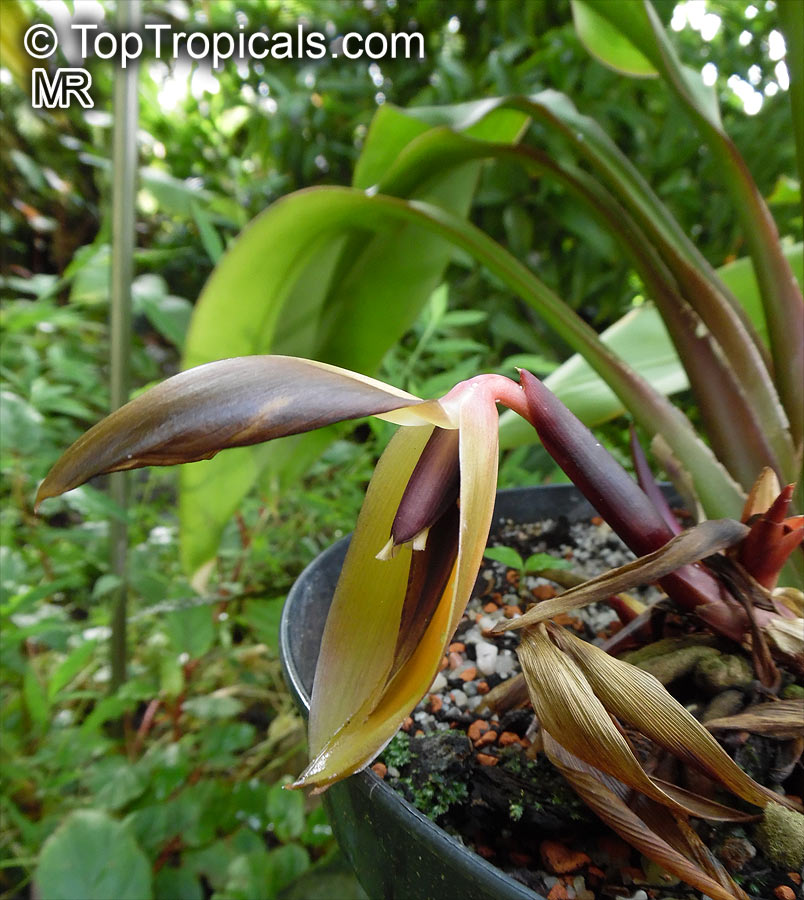 Orchidantha means "Orchid-flower", as one of the petals on the flowers is modified into a labellum, like the flowers of orchids. 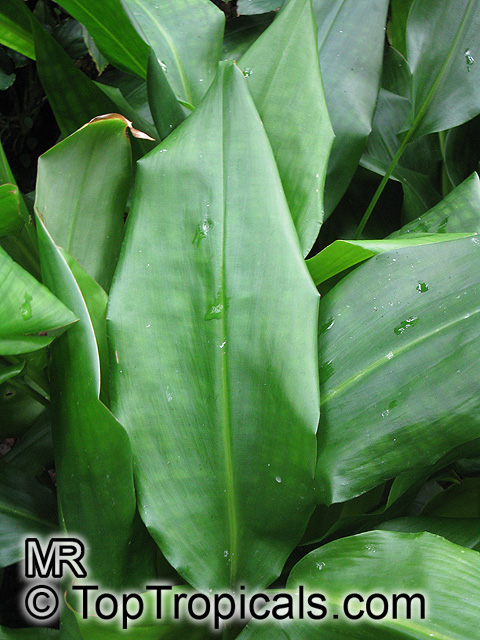 Orchidantha maxillarioides means "Orchid-flower", as one of the petals on the flowers is modified into a labellum, like the flowers of orchids. 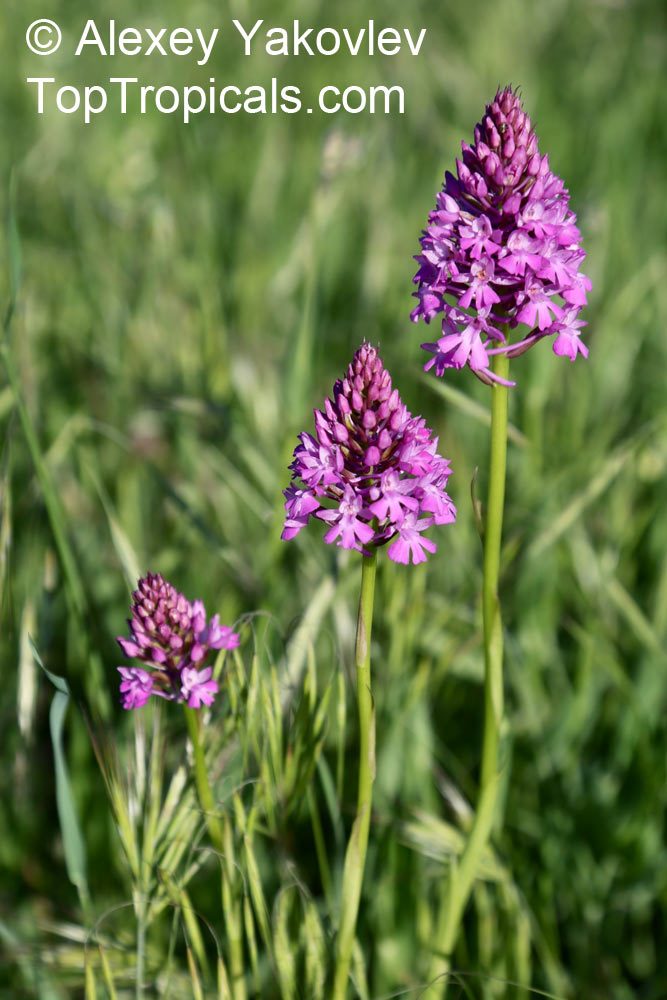 It is a good orchid to put into a meadow or wildflower lawn and usually thrives. Flowering takes place in late June through July. It also grows happily in a cold greenhouse, preferably in a plunged terracotta pot.

The bamboo orchid, Arundina graminifolia, is a species of orchid and the sole accepted species of the genus Arundina. This tropical Asiatic genus extends from India, Sri Lanka, Nepal, Thailand, Vietnam, the Ryukyu Islands, Malaysia, Singapore, China to Indonesia, the Philippines and New Guinea. It has become naturalized in Reunion, Fiji, French Polynesia, Micronesia, the West Indies, Costa Rica, Panama and Hawaii.

Arundina graminifolia is a terrestrial, perennial orchid with reedy stems, forming into large clumps. This orchid blooms in summer and autumn, showing rather open clusters of showy terminal flowers, ten at the most. They bloom in succession on the terminal racemes. These flowers are a rosy lilac and white disk with a purple lip. The bracts are wide triangular and surround the main stalk of the flower cluster. The occasional fertilized seed pods contain minute powdery seeds, and small plants often develop near the cane ends after flowering, and likely aid in propagation if allowed to reach the soil.

With only 200 of the plant to be recorded growing naturally in Singapore, the species is close to extinction there, largely caused by the destruction of its natural habitat, namely the rainforests and mangrove forests. The remaining plants, commonly called Tapah weeds, can be found in the secondary forests or at the forest fringes. It is however very common in road cuts and other disturbed areas in full sun in Sarawak, East Malaysia, where it often is the most common flowering plant to be seen along the roadsides.

Bamboo Orchid produces pinkish flowers at the top of tall cane-like pseudobulbs. It's the only species in the genus. The plants are quite tall; they'll reach at least hip level, possibly over your head, and their vegetative resemblance to bamboo can be uncanny. The long pseudobulbs have leaves alternating along their length, similar to Epidendrum orchids. The flower stems, which emerge from the top of the canes, produce several flowers sequentially, so that there will be one at a time over an extended period. The flowers are white with a purple-to-pink lip, and shaped similarly to a Cattleya orchid flower. They are 2-3 inches across, and can appear for much of the year, especially in summer.

Arundinas readily propagate themselves by keikis, which frequently develop along the pseudobulbs. Once a keiki has roots a couple inches long (several cm), you can carefully cut it off and pot it separately. The canes do not grow rigidly upright, they'll sometimes tip over; in nature, this allows the keikis to get established nearby, so it's a major vegetative propagation strategy for these plants; it helps them rapidly grow into large clumps. These plants like colonizing disturbed habitats, often growing as roadside weeds in much of Southeast Asia; being able to grow quickly helps them succeed in such places.

These plants are tough: they are quite robust and forgiving of less-than-attentive care. They are terrestrial orchids, so they like a denser potting mix than most orchids. It should still drain freely, however, and not be as dense as soil. A good starting point is equal parts sand, sphagnum moss, and fine fir bark. Bamboo orchids should be watered as they approach dryness; don't let them dry out too thoroughly. If you grow them outdoors, either if you live in a warm climate or if you just brought it outdoors for the summer, rainfall might water it often enough in some areas; but if it's starting to dry out water it thoroughly. If you grow orchids indoors, these plants are often too big to take to the sink; the easiest way to water will often be to dunk the pot in a bucket, then pull it out. Any aerial roots, such as on keikis, should be misted regularly. Fertilize regularly; the usual recommendation is to use a fertilizer especially formulated for orchids feeding weakly. Most orchid fertilizers are designed to be dissolved in the plant's water. They like high light: 2000-3000 footcandles is ideal, similar to the low end of Cattleya lighting. In nature, they commonly grow in direct sunlight. As long as the lighting isn't too dim you're probably fine. If it doesn't bloom, try increasing the lighting. You'll get the best results growing them at warm temperatures. It's OK if the temperature varies more widely than this; they can actually withstand mild freezes occasionally, though it's quite stressful for them. Any temperature that's reasonably comfortable (or a bit hot and muggy) for humans is going to be fine for bamboo orchids. They like good humidity, perhaps 70%, though this isn't critical. If the humidity is low, the plant should be misted regularly, especially if it has any keikis. 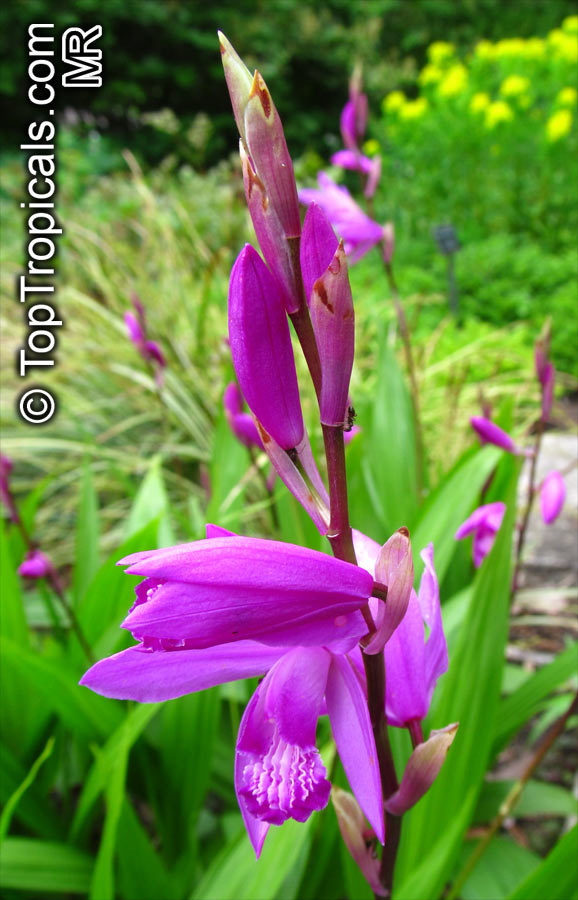 Bletilla striata is a perennial, deciduous orchid of open environments.

It is hardy in gardens from USDA Zones 5 (with protection) to 9. 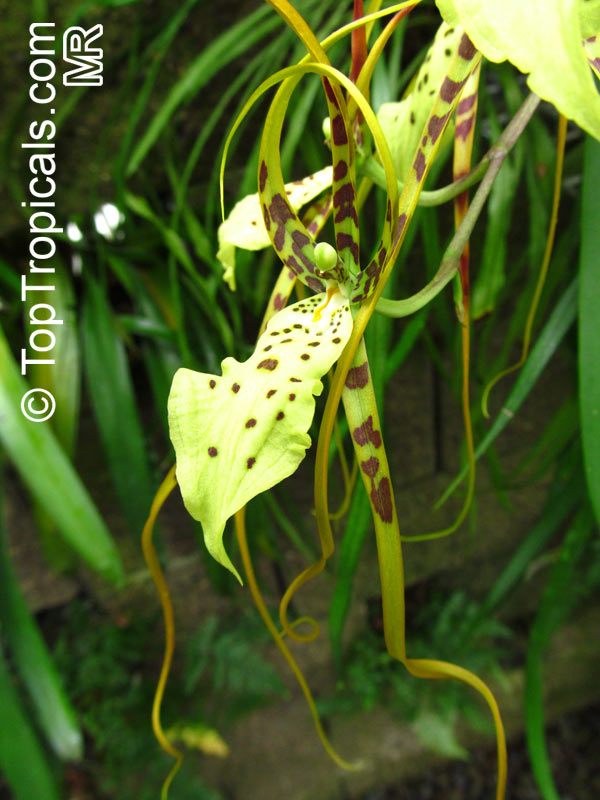 Brassia species and its popular hybrids are common in cultivation, and are notable for the characteristic long and spreading tepals.

Brassia orchids need a lot of water while producing flowers, but don't like to get too wet. Good air circulation is important, too, otherwise you will see brown spots on the leaves.

x Bakerara abbreviated Bak. is the nothogenus for intergeneric hybrids between the orchid genera Brassia, Miltonia and Odontoglossum 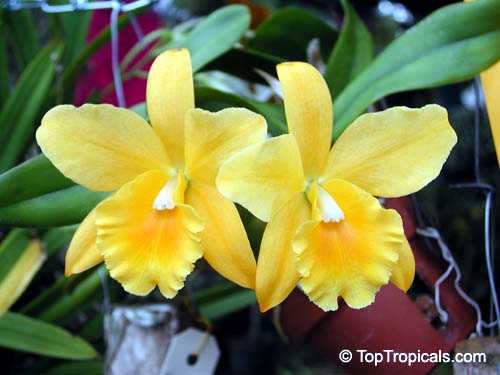 Named after William Cattleya. These orchids are the most sumptuous and exotic of all and are chosen for corsages. In nature there are about 50 species each of Cattleya and of Laelia from Central America, growing through the Amazon region to the south of Brazil. Many cattleya hybrids in the broad sense have other related genera in their parentage as x Brassocattleya, x Brassolaeliocattleya, x Laeliocattleya, x Sophrolaeliocattleya. Hawkinsara is an intergeneric hybrid with parent genera Broughtonia, Cattleya, Laelia and Sophronitis.

Their distinctive flowers and the tendency of these plants to grow in large colonies has meant that they have been vigorously over-collected and the status of many is endangered. The plants produce strong pseudobulbs' topped with one or more leathery leaves. Each year a dormant bud at the base grows into a new shoot. This thickens to produce the current year's pseudobulb. The flowers arise from the tip of the current year's growth and come in a range of colors. Some flower twice a year.