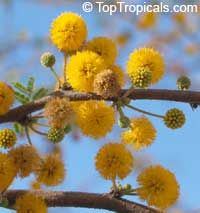 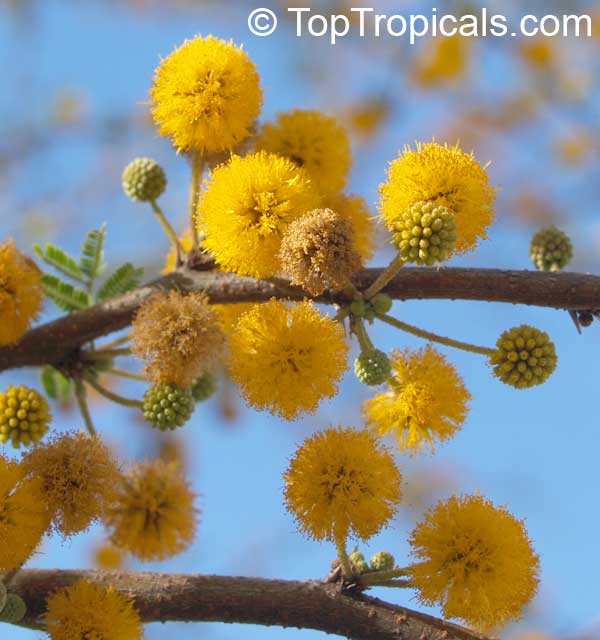 Sweet Mimosa. One of the most useful tropical plants...  more
Acacia farnesiana - Sweet Mimosa
Sweet Mimosa. One of the most useful tropical plants that is very cold tolerant, blooms all winter through spring with honey-fragrant flowers - canary yellow powder puffs, attracting bees and butterflies. This is a large size, multi-stem thorny shrub 15x15 ft that requires some space. It is very fast growing, can be used as a good screen plant. It will bring you joy with pretty flowers and sweet fragrance even during freeze snaps when other trees lose leaves and suffer. This one will continue blooming and stays evergreen - a real survivor! Tolerates poor soils and drought too. Provide regular water to establish quicker. 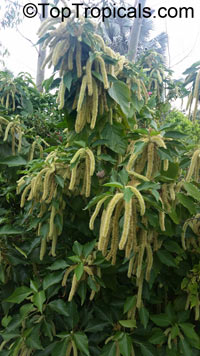 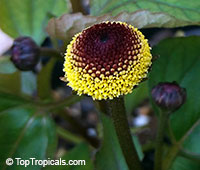 Toothache Plant is a medicinal herb that has been...  more
Acmella oleracea - Toothache Plant, Botox Plant
Toothache Plant is a medicinal herb that has been used for generations to manage the pain of toothaches. Both the leaves and the attractive golden flowers can be used as a natural anesthetic. Simply chew the leaves or flowers for a few seconds then you will experience a tingling and numbing sensation in your mouth. Cooked leaves lose their strong flavor and may be used as leafy greens. Both fresh and cooked leaves are used in dishes such as stews in northern Brazil. Flavor is described as having an odor of citrus, herbal, tropical or musty odor, and its taste can be pungent, cooling, tingling, numbing, or effervescent. Acmella Oleracea extract is considered a natural alternative to Botox. Applied topically, Acmella Oleracea reportedly reduces muscle tension, reducing facial wrinkles caused by tense or contracted facial muscles.
The plant is a small, erect, it grows quickly and bears gold and red inflorescences. It is frost-sensitive but perennial in warmer climates. Can be grown in a container and as a houseplant. 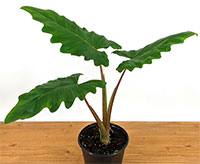 Boa is an exciting new upright Alocasia that features...  more
Alocasia Boa
Boa is an exciting new upright Alocasia that features enormous leaves and remarkable serrated leaves with marbled stems.
It has snakeskin-like stems and serrated leaves. This variety makes an excellent container plant as well as a beautiful landscape plant for the tropical garden. Boa produces many suckers which makes for an attractive container. This is an excellent mid-size Alocasia for the centerpiece of mixed combination pots. There is something so intriguing and beautiful about the Alocasia boa. With its massive, green leaves which have highly-serrated edges and robust stems, it is a favorite for many homeowners. 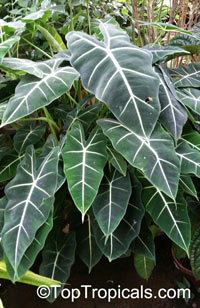 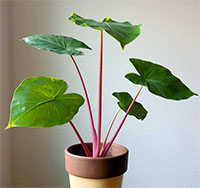 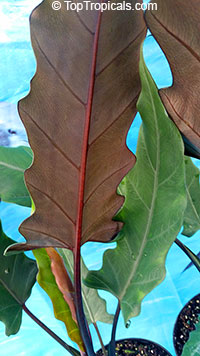 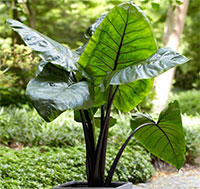 Black stems and veins adorn this extraordinary form...  more
Alocasia macrorrhiza Black Stem
Black stems and veins adorn this extraordinary form of Alocasia macrorrhiza. This very rare and unusual elephant ear is quite different from the typical. The huge thick sculpted forest green leaves with are held upright on dramatically rigid black stems. Reaching a mature height of 4-5 ft, it loves high light with only moderate shade. Black Stem Upright Elephant Ears are among the most eye catching. Beautiful on their own or planted as a back drop for your favorite blooms, these landscaping plants provide a bold, tropical effect in nearly any garden. 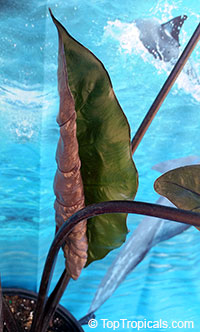 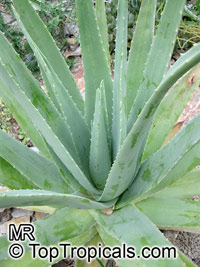 Aloe Vera. A popular medicinal plant for every household.

This rare Annona is a species originally brought to...  more
Annona sp. - Golden Sugar Apple, Pineapple Annona
This rare Annona is a species originally brought to us from Costa Rica. We believe it to be a natural hybrid between A. muricata and A. glabra.
It is a very ornamental, evergreen, small to medium size tree with waxy, large 4-6" leaves, similar in growth habit to A. muricata, A. montana or Rollinia. Fast growing, forms nice bushy specimen. It has a large, up to 1 lb fruit, green when unripe, turning dark yellow to orange on ripening. The pulp is golden to orange when ripe, with strong Pineapple scent, and resembling Jackfruit in texture. Flavor is like the custard apple but with pineapple, papaya, apricot and melon overtones. Note that some people dislike the taste, others find it good.
The treetolerates flooding. It is also cold hardy at least to upper 20's for a few hours. 3 year old trees survived several nights with frost with hardly any leaf damage. The plant would be very interesting for rare fruit collectors as it offers a large, exotic fruit of unusual color and taste, and appears to be much more hardy and water tolerant than similar looking but sensitive A. muricata, A. montana and Rollinia.
Propagation is by seed, which are grayish to light brown. If stored for several months, seeds may take up to six months to sprout. Trees produce after three to four years from seed. 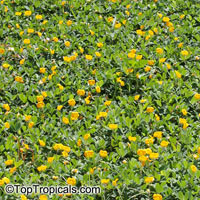 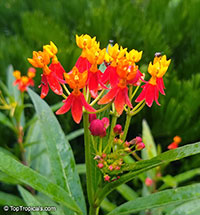 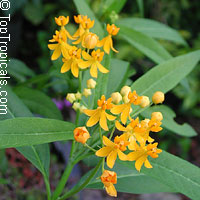 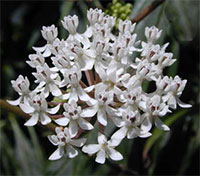 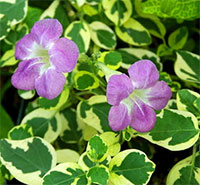 Variegated Purple Primrose, Chinese Violet. The brightly...  more
Asystasia variegata - Variegated Chinese Violet
Variegated Purple Primrose, Chinese Violet. The brightly variegated leaves of yellow and dark green, make a great contrast with the flowers. It thrives in sun or partial shade and can tolerant dry conditions, heat, humidity, salty air, and poor nutrient soils. Give this easy growing plant good drainage and medium moisture for optimum growth.
Can be used as a mass planting under large trees and borders in full sun, semi-shade or full shade. It is also a good container plant. Leaves have been eaten as spinach in India.
This ground cover thrives in semi-shade and will also grow in sunny spots if it receives adequate moisture. It can be planted in any soil in the garden, but will do better if plenty of compost is added. 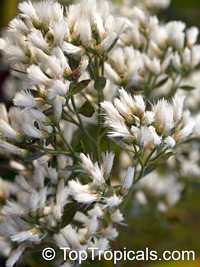 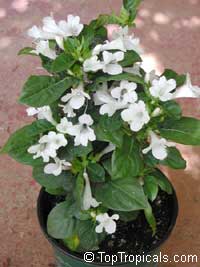 Very decorative compact evergreen shrub with white...  more
Barleria cristata Alba - White Philippine Violet
Very decorative compact evergreen shrub with white flowers in Fall-Winter. Grows into a shapely shrub with minimal pruning. The trumpet-shaped 2" long flowers open in in terminal clusters in November and continue into mid-December. The great feature of this plant, it can take both full sun or shade.
This is an easy-to-grow shrub, about 3ft height, which can be used for a garden hedge or tightly clipped into geometrical shapes. It requires some sun to flower profusely and occasional pruning to promote bushy growth. 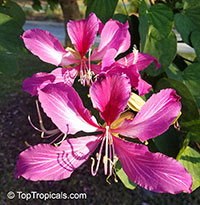 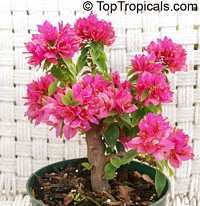 Bougainvillea Sunvillea Rose (also called Dwarf Pixie)...  more
Bougainvillea Dwarf Pixie
Bougainvillea Sunvillea Rose (also called Dwarf Pixie) is deep pink, almost a magenta in color. It blooms the brightest of fuchsia-pink bracts contrasting with its bright green foliage. If you're looking for a pick-me-up for your container gardens, or a dull space in the landscape, here's your winner!
It is a dwarf form of thornless Bougainvillea with extremely slow growth rate. These showy evergreen dwarf beauties have numerous bright colorful bracts growing in an upright habit. This plant flowers in a small as a 4" pot and is great for landscapes and patio containers. It has a shape of natural bonsai, and leaves are smaller. Bright flowers are born in dense clusters. 3-4 y.o. plants can stay only 3-4 ft and look like natural bonsai trees. They stay compact, perfectly round and dense shape, don't require pruning, making a must-have for any garden, especially for the small spaces in your yard.
See picture of the mature tree in 7 gal pot 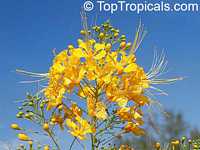 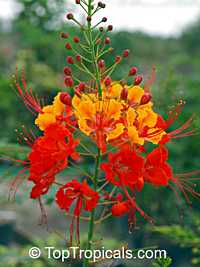 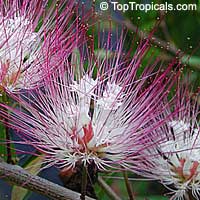 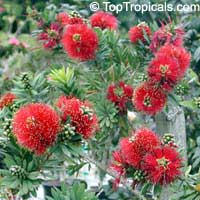