How to get Passion Vine to flower?
From Mark Hooten, the Garden Whiz 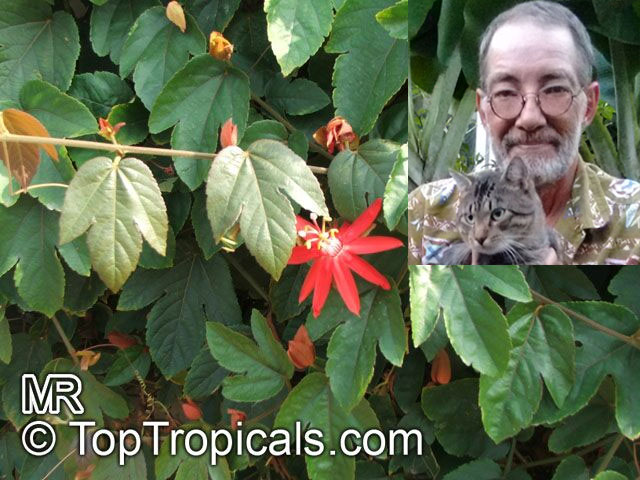 Q: Several months ago, I purchased a passionflower vine, a red one with lots of flowers. I ended up putting it in a much larger pot with a large trellis, using a popularly advertised bagged potting soil recommended at a big box store. I have given it a blue colored water-soluble fertilizer every couple of weeks as recommended. However, while the vine seems very happy, growing faster than i can keep winding it around the trellis, it has not flowered all summer. I there something I am doing wrong?

A: Passionvines as a group (and there are some 500 different kinds!) are sort-of unusual among popularly grown ornamentals because they have "nitrogen issues". This is because, even though unrelated, they are much like most legumes, as they maintain a symbiotic relationship with certain beneficial soil bacteria which allows them to gather atmospheric nitrogen and store it in their roots. When they have an overabundance of nitrogen, they simply stop flowering and produce rampant leafy growth while never flowering. They only flower well after a period of healthy vine growth, because the plant had finally used up all of its stored nitrogen.
Since you had both used a bagged potting soil which likely already contained fertilizer with nitrogen added, as well as bi-monthly doses of a liquid fertilizer which also contains nitrogen, it has been receiving so much nitrogen it only knows to grow more vineage until the nitrogen is used up. If and when that happens, it will again begin to flower. This rule applies of course not only to flowering but also to fruiting varieties of Passiflora: the more flowers, the more fruit you get!
So the answer is - for the time being, just stop giving it supplemental fertilizer and it will start flowering for you sooner than later!

See all passion vines from TopTropicals.