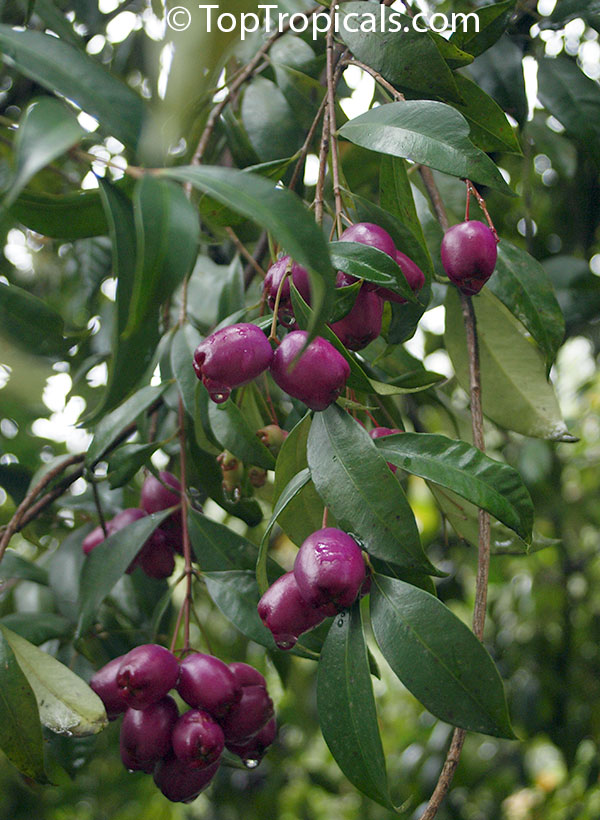 Native to India, Nepal, Pakistan and Indonesia, this tree was introduced to Florida, USA in 1911. Now also grows abundantly in Suriname and has been introduced to many different places where it has been utilized as a fruit producer, as an ornamental and also for its timber (the wood is strong and water resistant). In favorable conditions, this plant has the ability to form a dense cover, excluding all other species which has allowed it to become invasive in Hawaii.

According to Hindu tradition, Rama subsisted on the fruit in the forest for 14 years during his exile from Ayodhya. Because of this, many Hindus regard Jambul as a 'fruit of the gods'. In Hindu mythology Lord Krishna has been described as having skin the color of Jambul. The leaves are used in India as marriage pendals.

A fairly fast growing species, in native conditions it can reach heights of up to 80ft and can live more than 100 years. Its dense foliage provides shade and is grown just for its ornamental value. Large oblong leaves are smooth, glossy, with a turpentine smell.

The tree starts flowering from March to April. The small flowers in branched clusters are fragrant. The fruit develops by May-June and resembles a large berry, starting green, then turns pink to shining crimson black as it matures. The flesh has a combination of sweet, mildly sour and astringent flavor and tends to color the tongue purple. The fruit is eaten raw, and may be made into tarts, sauces and jams. Good quality Jambul juice is excellent for sherbet, sirup and "squash", an Indian drink. In Goa and the Philippines, it is an important source of wine, somewhat like Port, and the distilled liquors, brandy and "jambava" have also been made from the fermented fruit. The juice can also be made into Vinegar. The Jambul tree is of real value in apiculture. The flowers have abundant nectar, and the honey is of fine quality. The essential oil distilled from the leaves is used to scent soap and is blended with other materials in making inexpensive perfume.

The fruit has a high source in vitamin A and vitamin C, and has received recognition in folk medicine and in the pharmaceutical trade. The seeds, leaves and bark are also used in various alternative healing systems like Ayurveda and Chinese medicine.

The tree occurs in the tropical and sub-tropical climates under a wide range of environmental conditions and can thrive on a variety of soils. Jambul grows easy in sub-tropics and tolerates cooler winters. It is sensitive to frost when young but mature trees have been undamaged by brief below-freezing temperatures. It prospers on river banks and has been known to withstand prolonged flooding, yet it is tolerant of drought as well. Dry weather is even more desirable during the flowering and fruiting periods. The seedlings starts fruiting in 4-7 years.

More similar plants
We have this item for sale
Image gallery: 16 images 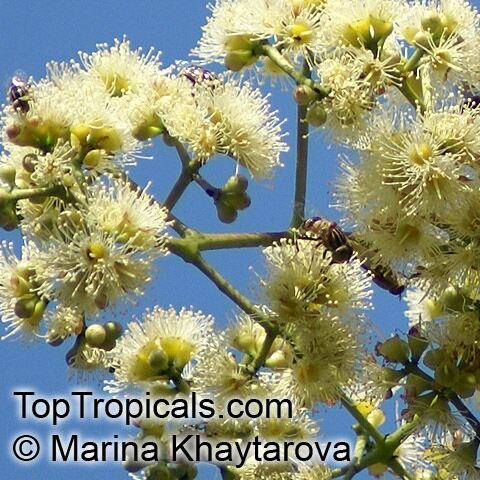 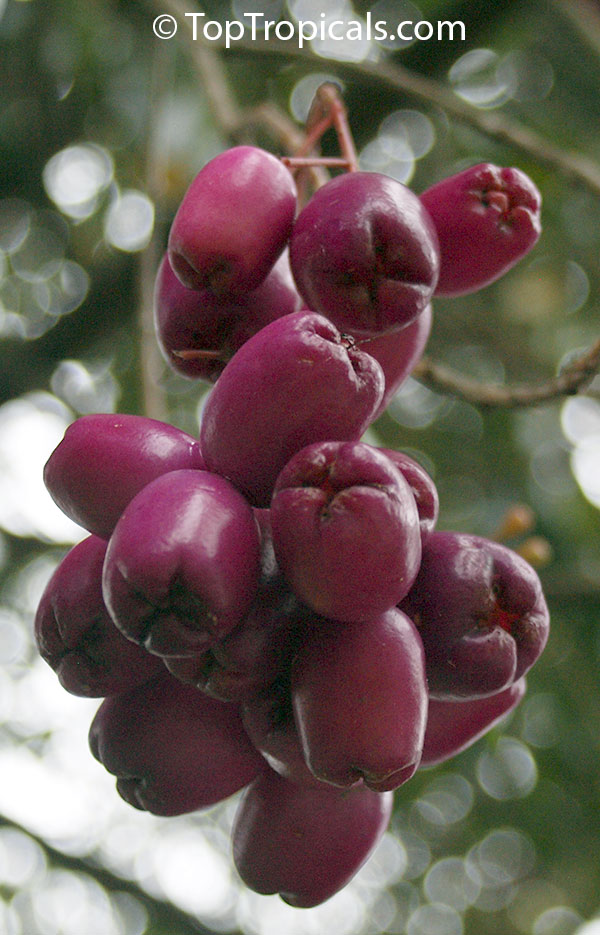 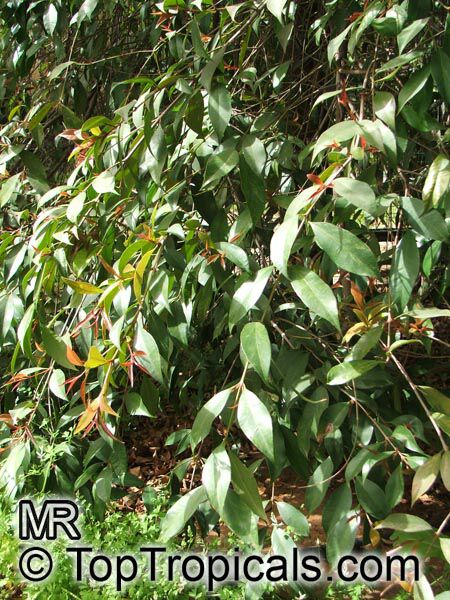 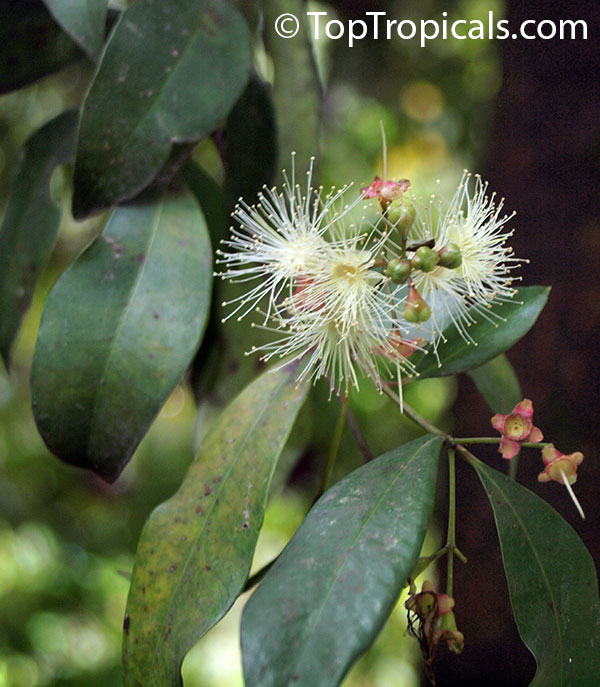 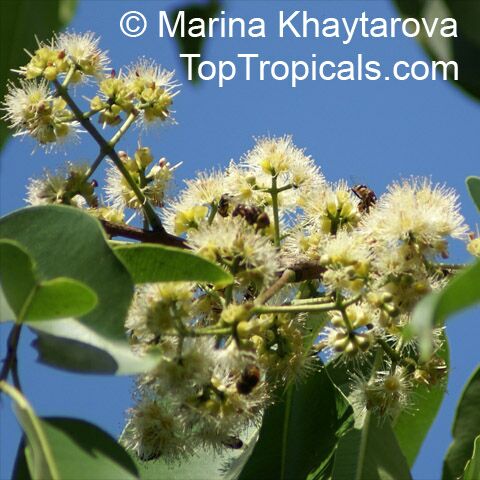 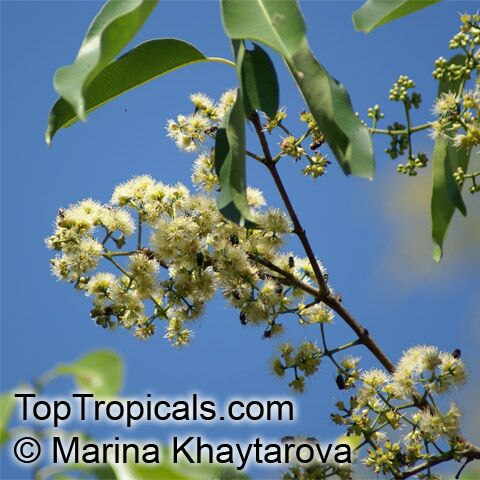 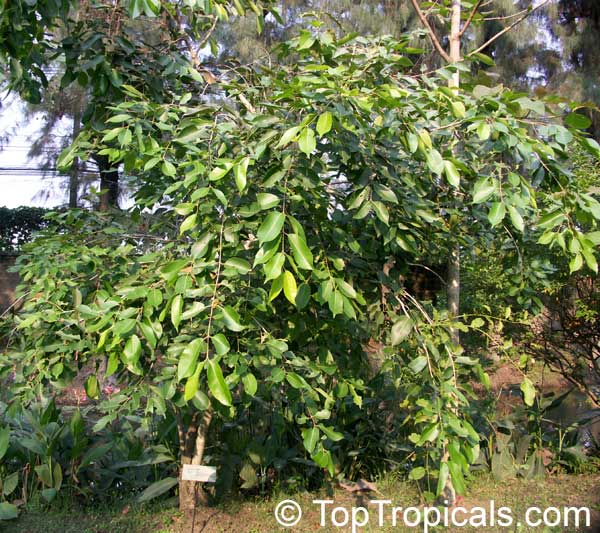 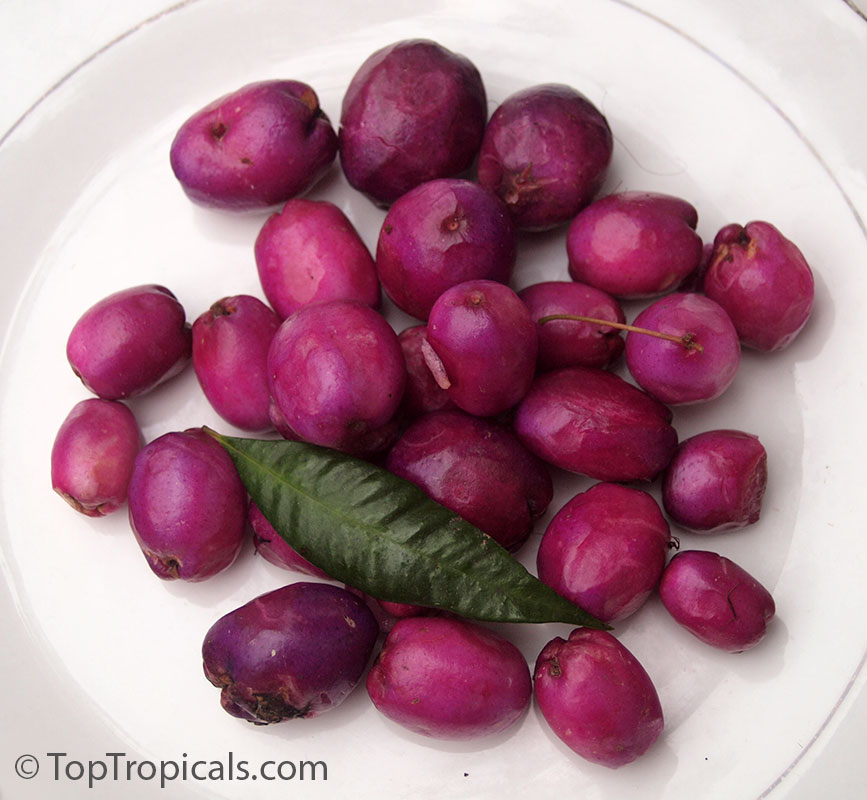 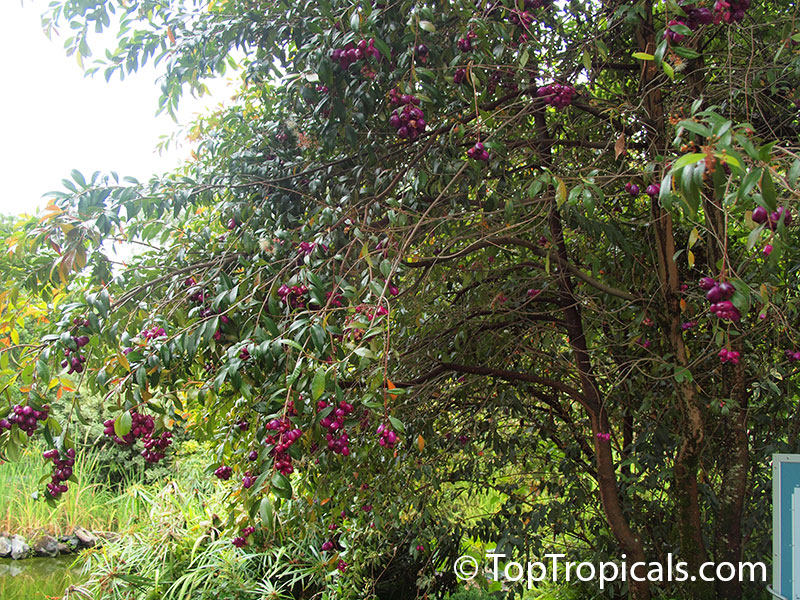 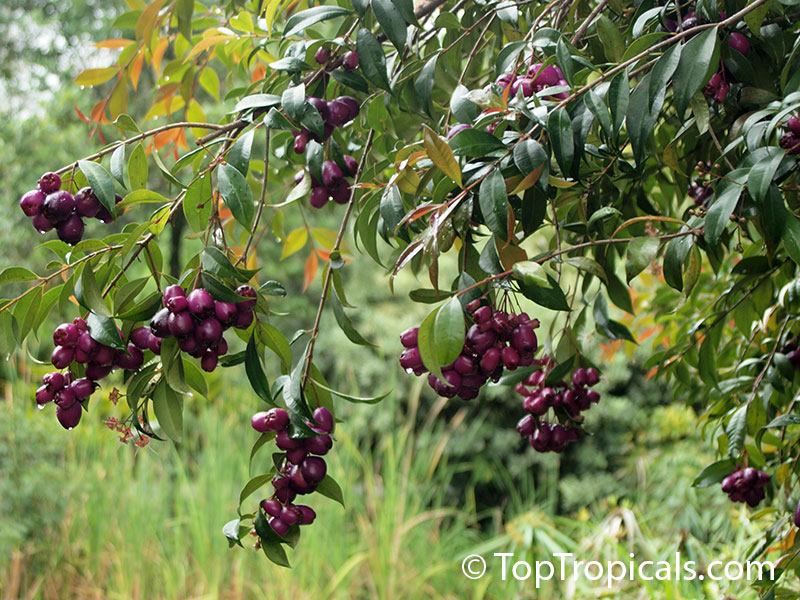 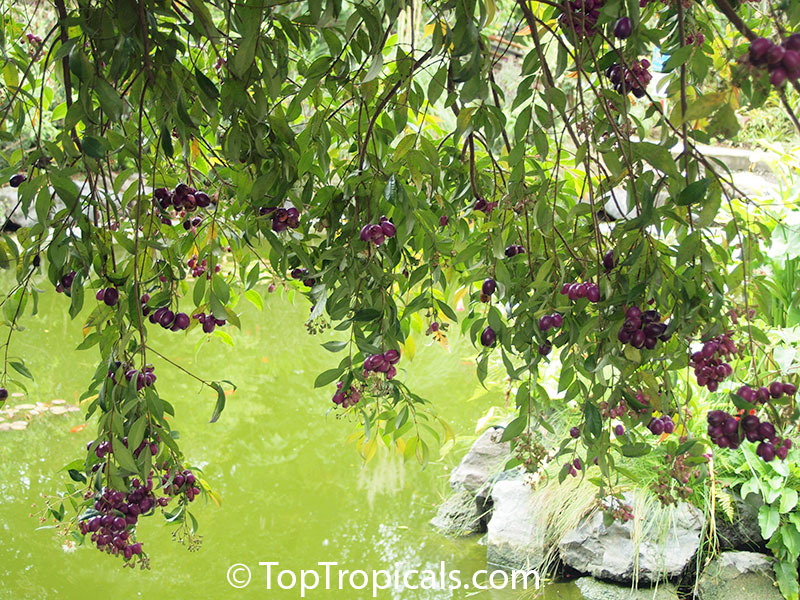 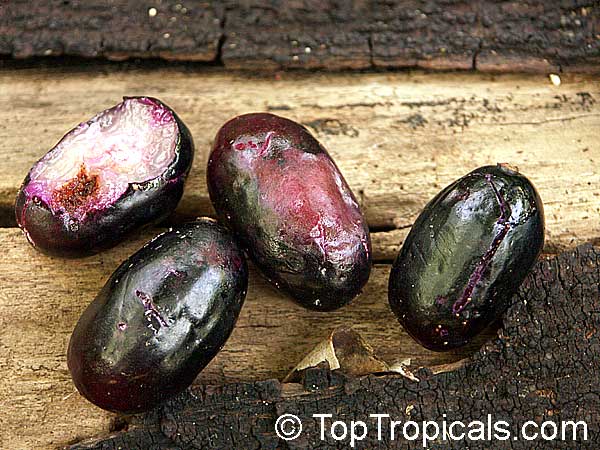 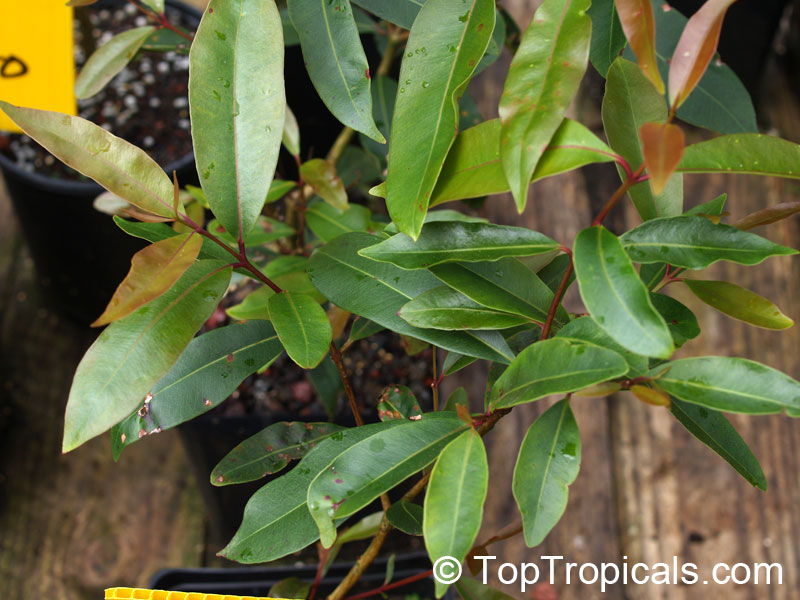 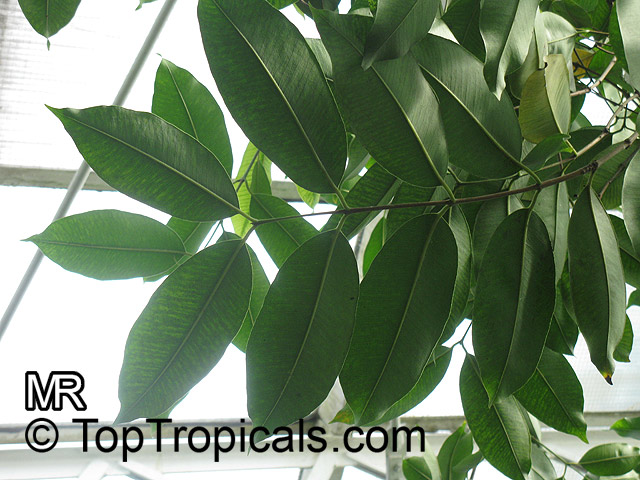 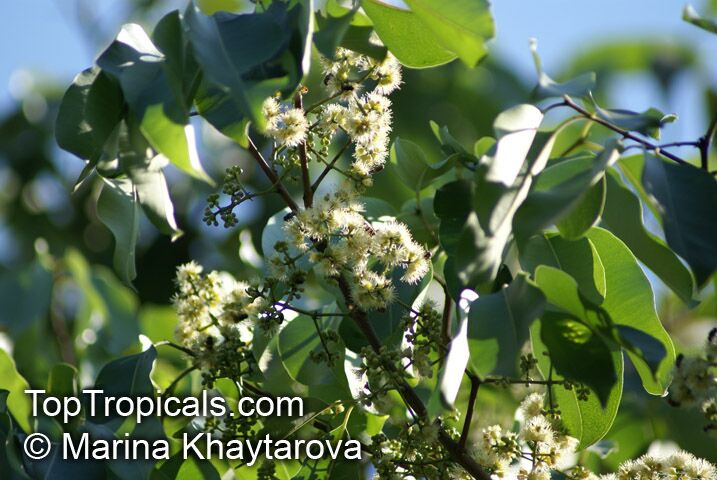 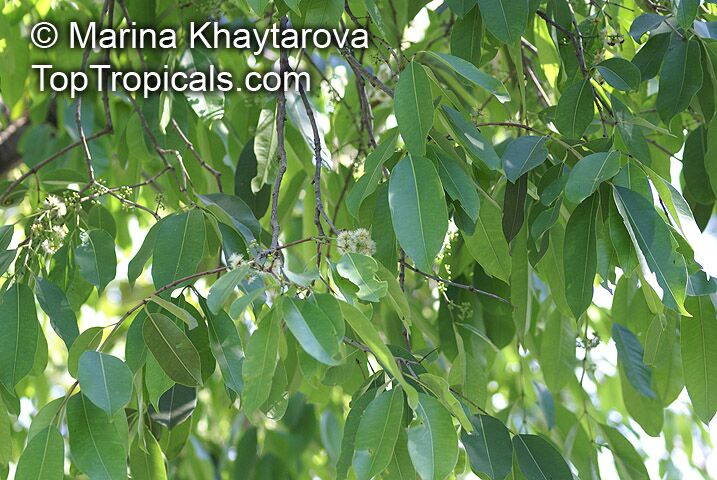