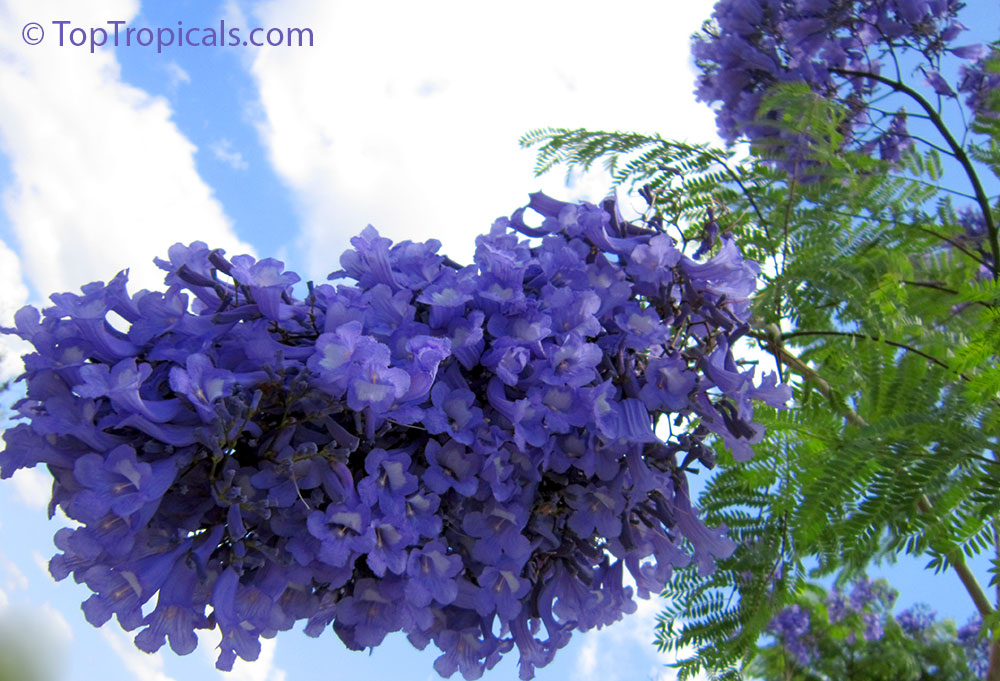 ...Hypnotizing bluish-purple, trumpet-like flowers create the magical image of the tree. Incredible, long-lasting purple blooms in spring give way to rich, yellow hues in the fall, making the Jacaranda Tree a season-to-season star that stands out. Fern-like foliage lends volume to its bold, dramatic silhouette for a landscape look unlike any other. When the trumpet-shaped blooms finally fall, they form a lilac carpet beneath the awe-inspiring Jacaranda for luxuriant curb appeal...

Oh, Jacaranda, Jacaranda…
According to an Amazon Tupi-Guarani tribe legend, a beautiful bird called Mitu landed atop a Jacaranda tree, bringing a beautiful indigenous priestess with it. The priestess, called Daughter of the Moon, descended from the tree and lived among the villagers. She shared with them her knowledge, wisdom and ethics, showing them the difference between good and evil. After she fulfilled her mission, she returned back to the tree adorned in Jacaranda blooms and ascended to the heavens where she united with her promised one, the Son of the Sun, who had fulfilled a similar mission in another part of the jungle... 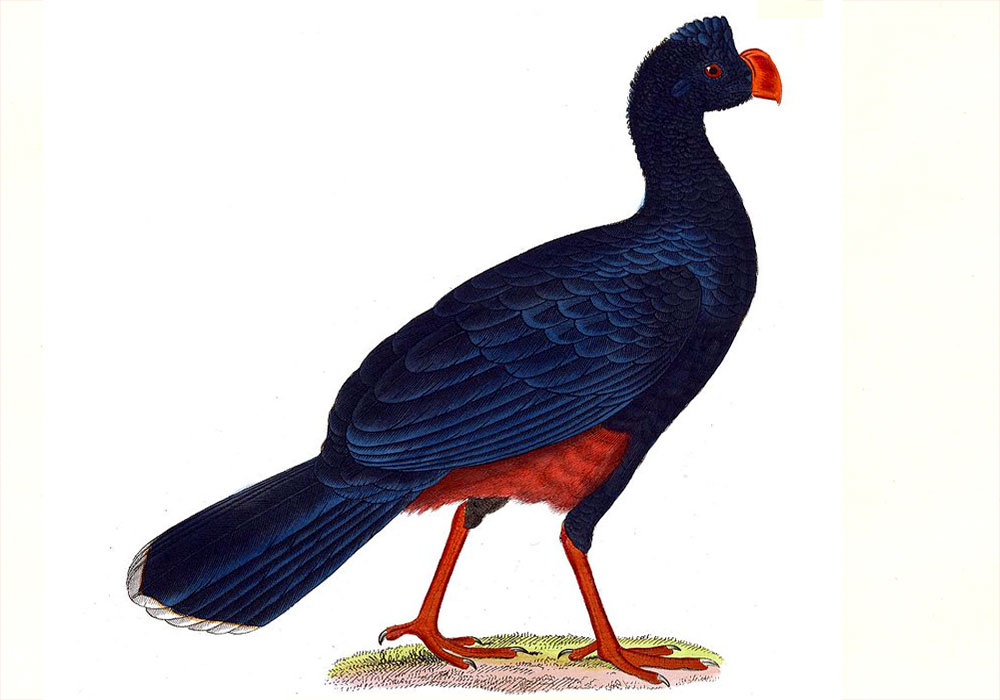 The traditional range of the Tupi-Guarani people that extended over parts of Paraguay, Uruguay, Argentina, Brazil, and Bolivia was also home to the tree named Jacaranda. So they told that the Guarani word Jacaranda meant fragrant. Fragrance are from the lightly scented blooms but fragrance from the cream-pink toned wood with beautiful streaks... 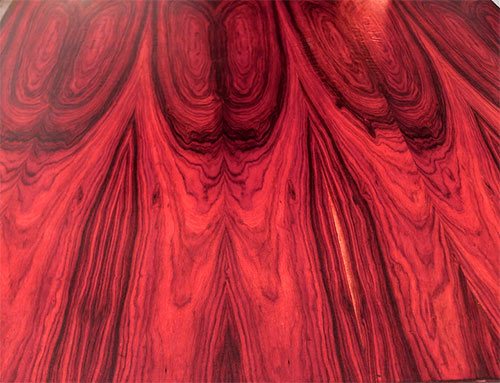 The most often seen is Jacaranda mimosifolia, and more rare one is Jacaranda obtusifolia (Blue Jacaranda). These trees are really cosmopolitans, they have been introduced to most tropical and subtropical regions to the extent that it has entered the popular culture. 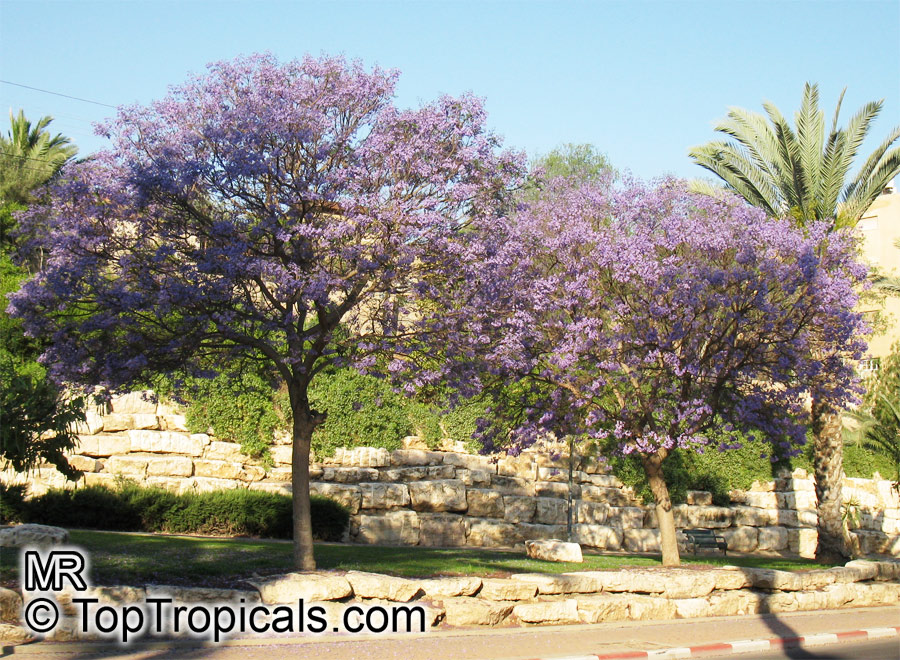 In native favorable conditions, this tree can grows to a height of up to 60ft. Its bark is thin and grey-brown, smooth when the tree is young but eventually becoming finely scaly. The twigs are slender and slightly zigzag; they are a light reddish-brown. Jacaranda is cultivated for the sake of its large compound leaves, even in areas where it rarely blooms. These leaves are up to 18 " long and bi-pinnately compound, with leaflets little more than 0.4" long. 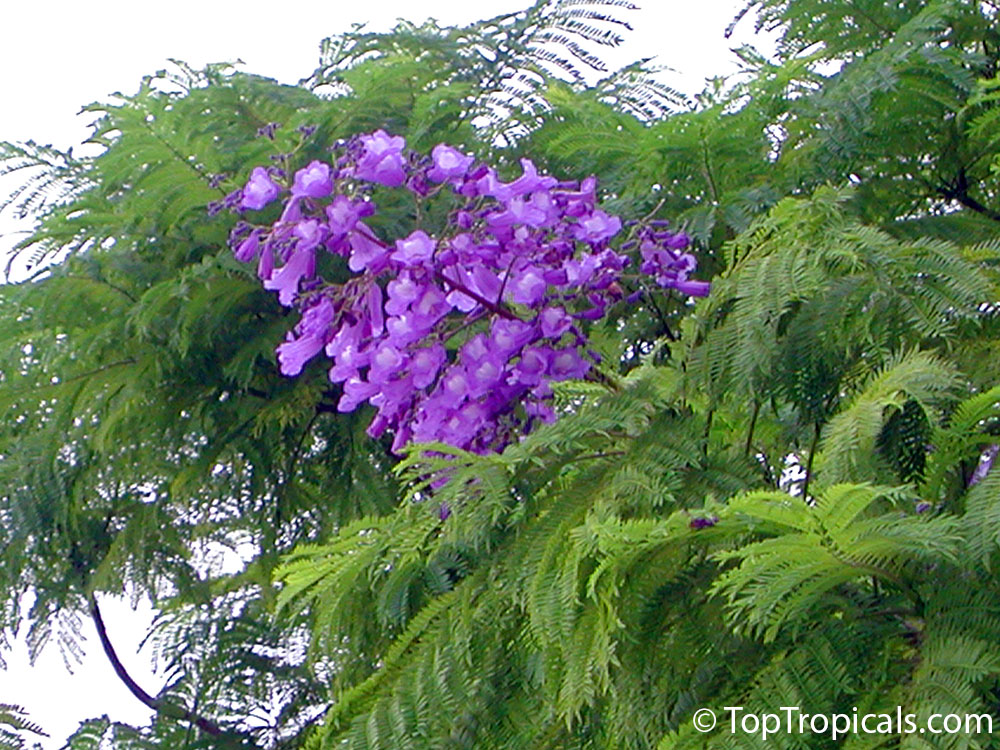 Before blooming, Jacaranda loses almost all its leaves. 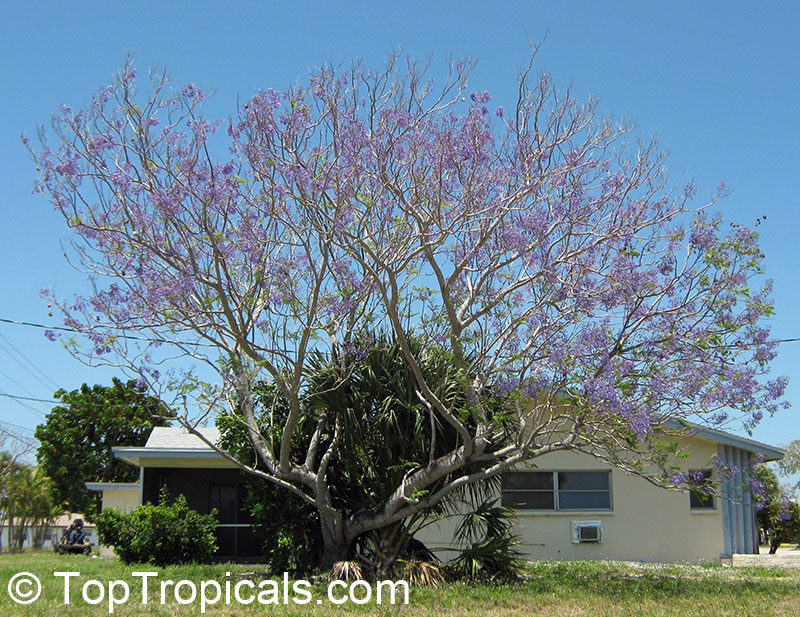 When it blooms, it presents a profusion of flowers in clusters. When the flowers fall, the Jacaranda restores its foliage and a new cycle begins. 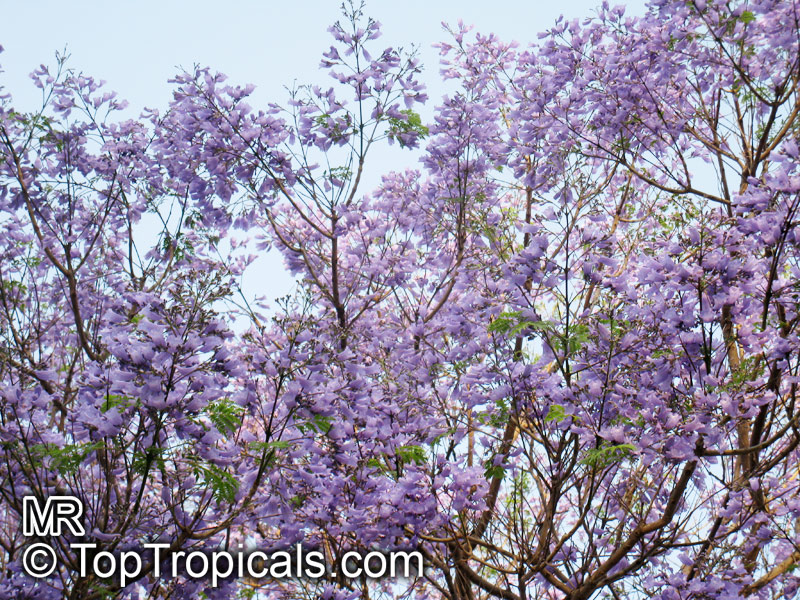 The flowers are up to 2.0" long, and are grouped in 12" panicles. They appear in spring and early summer, and last for up to two months. When the trumpet-shaped blooms finally fall, they form a lilac carpet beneath the awe-inspiring Jacaranda for luxuriant curb appeal.

Hypnotizing bluish-purple, trumpet-like flowers create the magical image of the tree. Incredible, long-lasting purple blooms in spring give way to rich, yellow hues in the fall, making the Jacaranda Tree a season-to-season star that stands out. Fern-like foliage lends volume to its bold, dramatic silhouette for a landscape look unlike any other. 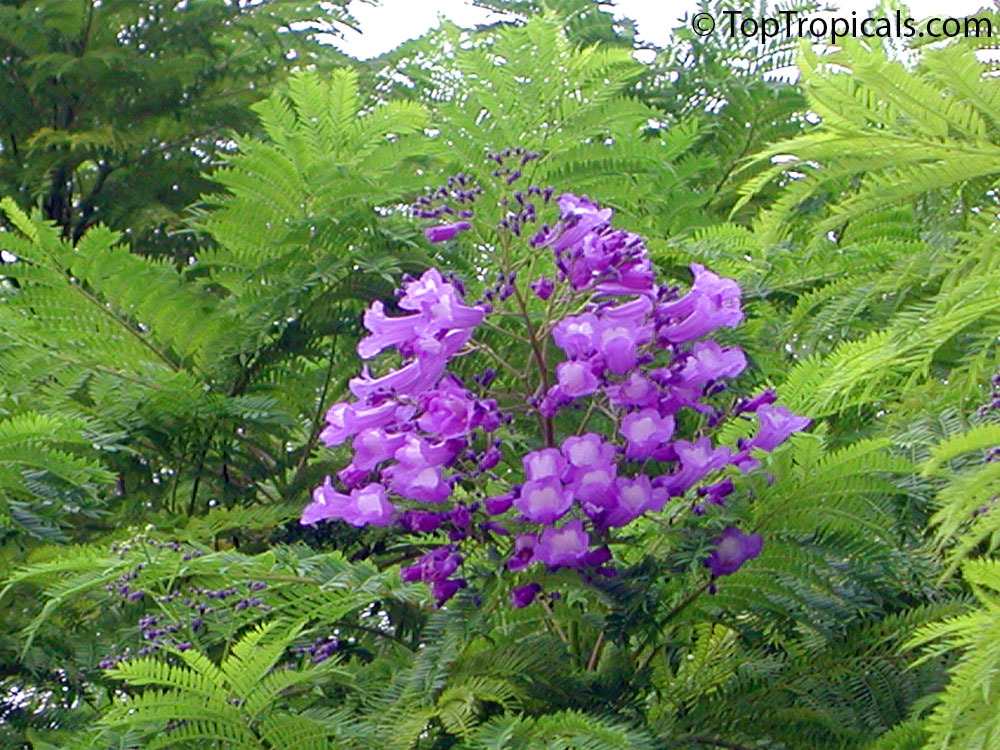 The tree doesn't have any strong odor. The flowers themselves have a very faint sweet smell to it. The strongest odor is actually the dried leaves accumulated underneath the tree. When fallen, drying leaves have their own fragrance, filling the air around the trees. This smell, the smell of jacaranda, is special. It is not as sweet as the smell of jasmine, not as elegant as the smell of magnolia or ylang-ylang, it is not mysterious smell of white flowers in moonlight beams... It is impossible mixt of musky with a hint of honey and something unrecognized... It is just Jacaranda smell. Unique. 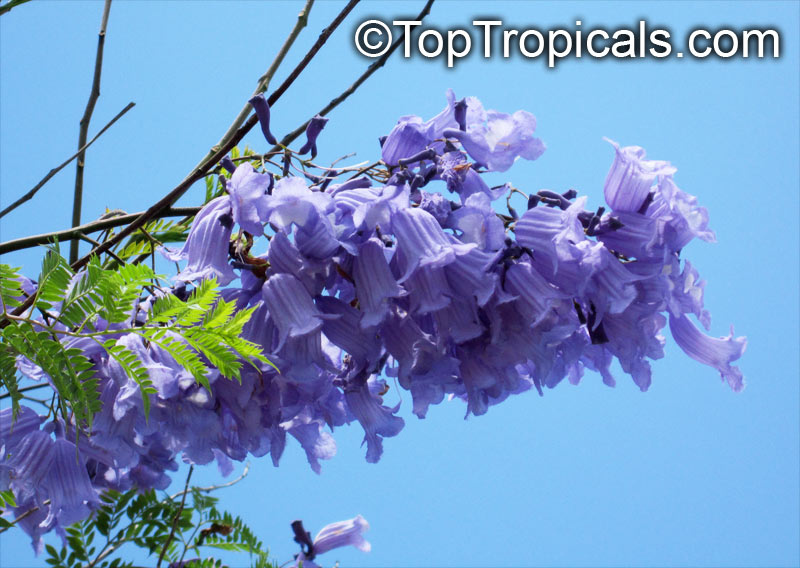 The fruit - woody seed pods - are flat, green and oval with a length of 2-4 inch, turning dark brown when ripe. They have a rich wood smell, kind of smoked, a big sharp and herbaceous. The pods contain flat seeds with fragile wings. 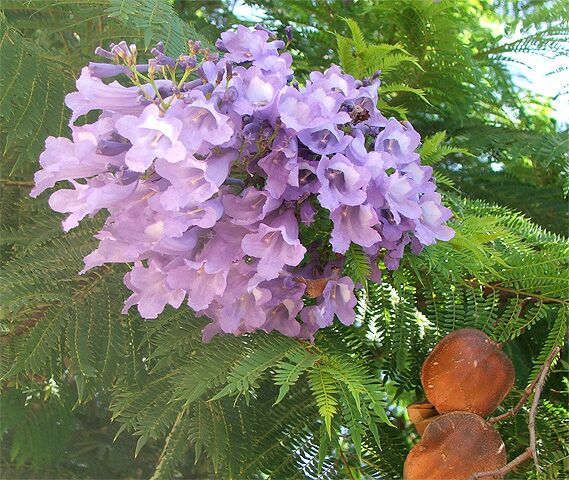 When ready, the seeds diverge into the air like thousands of tiny angels, dancing in the wind. These unusually shaped, tough pods are often gathered, cleaned and used to decorate Christmas trees and dried arrangements. 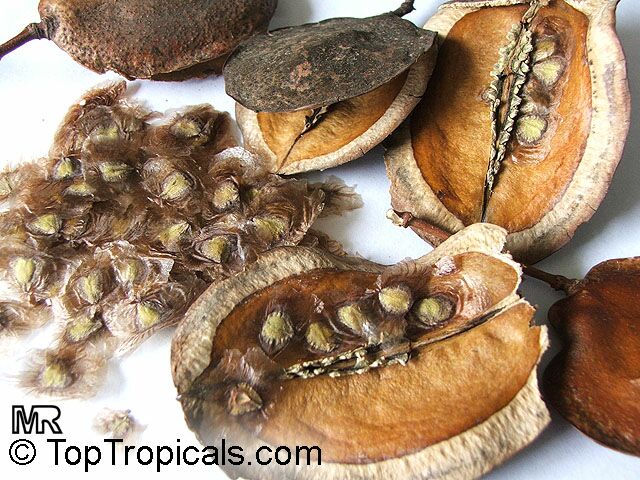 This strong, light and easy to work wood that lends itself to a handsome finish and polish is used in the automotive industry for luxury cars, in Egypt for making beautiful pianos and in Brazil for making acoustic guitars. 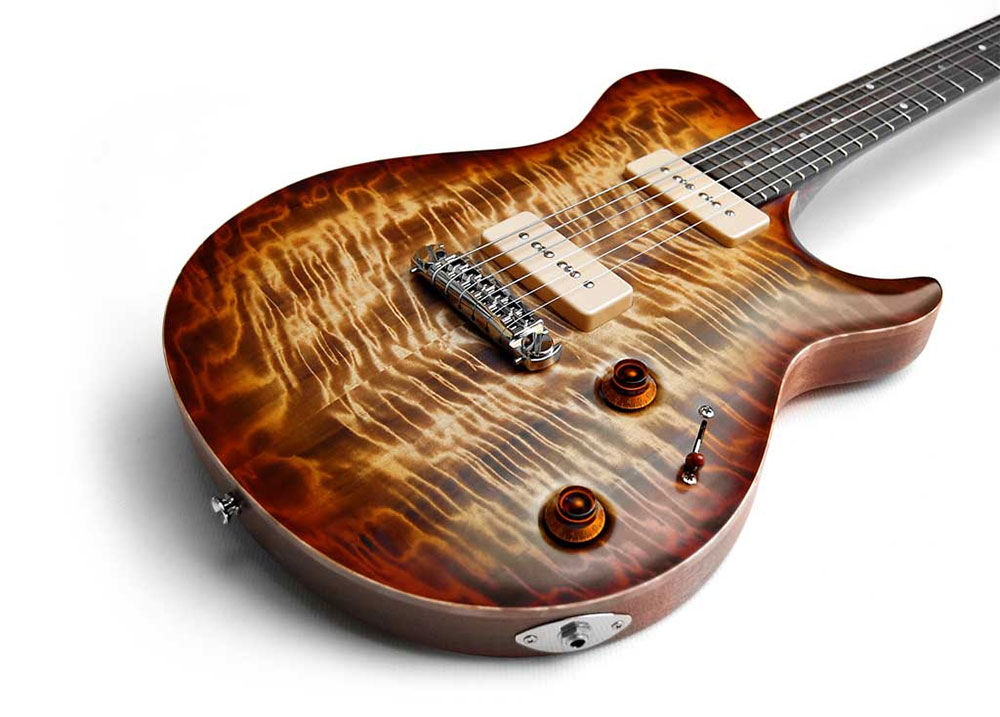 Jacaranda literally found her second home at the other end of the world, in South Africa and Australia. The city of Grafton on the north coast of New South Wales, Australia, is a famous for its Jacarandas. Each year in late October and early November (remember it is the Spring time in Southern Hemisphere!) the city has a Jacaranda festival during the period of full bloom. A street parade, local public holiday and a series of events are held. A Jacaranda Queen and Jacaranda Princess are named at a formal ball. 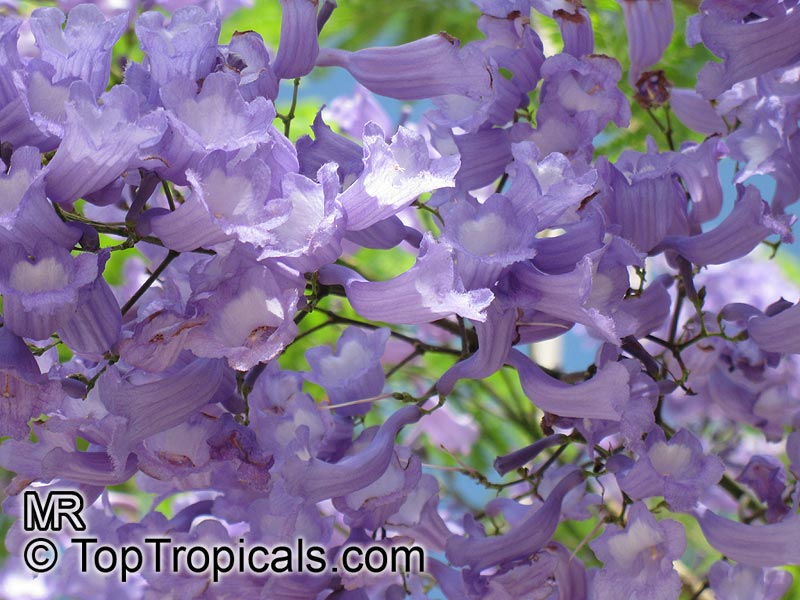 Purple panic is a term used by students in south-east Queensland for student stress during the period of late spring and early summer. The "purple" refers to the flowers of Jacaranda trees, which bloom at that time and have been extensively planted throughout that district. The "panic" refers to the need to be completing assignments and studying for final exams. Student’s legend says if the flower falls on your head, it means good fortune for you. 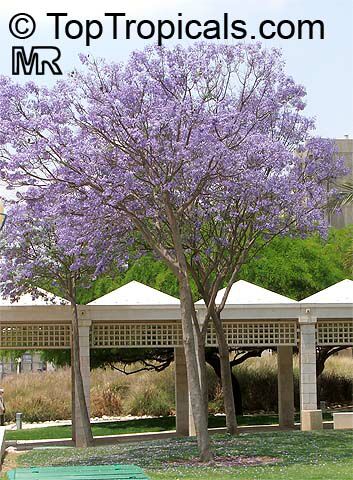 Pretoria, the administrative capital of South Africa, is popularly and poetically known as Jacaranda City or Jakarandastad in Afrikaans because of the large number of trees, which turn the city blue when they flower in spring. The name Jakarandastad is frequently used in Afrikaans songs. 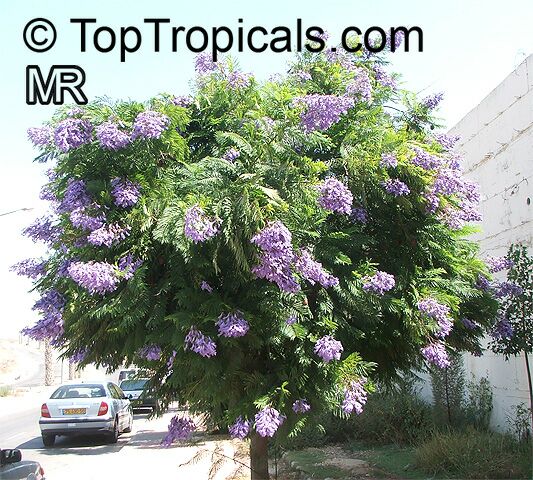 And of course, in their homeland, in South America, jacarandas are still considered as tree of Daughter of the Moon, a special tree endowed with special properties. Even healing - Indians used any parts of these trees in traditional medicine as a natural remedy. They consider jacaranda a symbol of wisdom, rebirth, wealth and good luck. 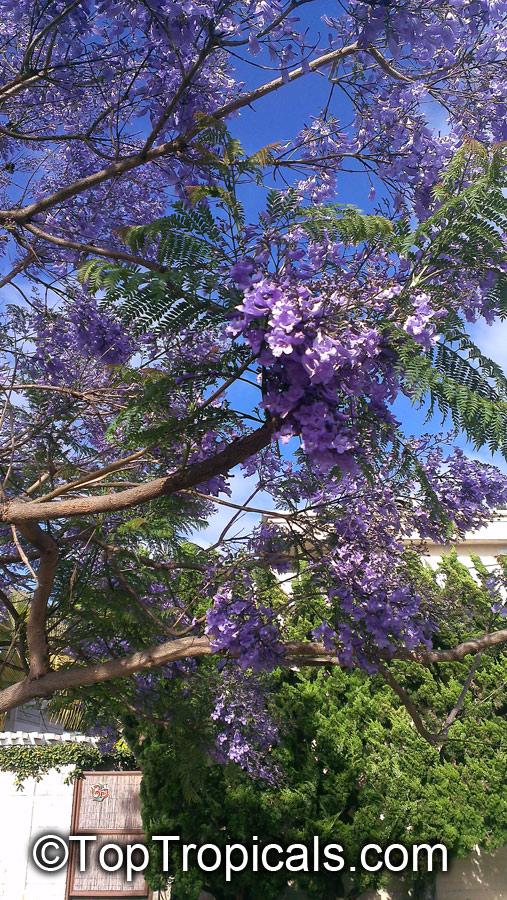 No wonder then that a legend from Argentina brings us a patriarch among jacaranda trees that planted at Plaza Flores in Buenos Aires which would whistle tango songs when requested. Jacaranda is dedicated to many folk songs, poems and songs by Maria Elena Walsh, Argentine poet, novelist, musician, playwright, writer and composer, and also everyone's favorite Tango Jacaranda. 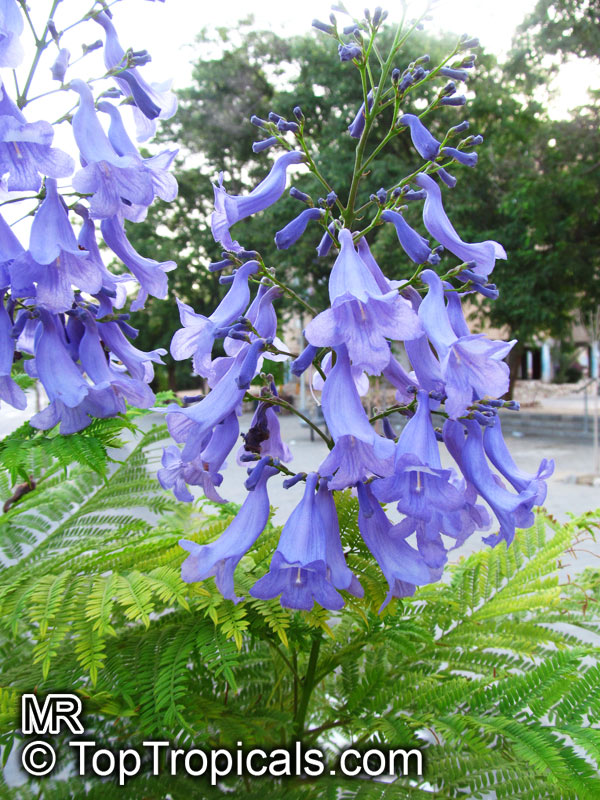 November is a month excitedly awaited by the local people - ‘porteños’ and the tourists alike, since they get the chance to come to the city and see one of its natural wonders occur: the blooming of the jacaranda trees. Today, according to the last census, the city is home to 11.000 jacaranda trees. The city turns blue-purple once a year thanks to it. 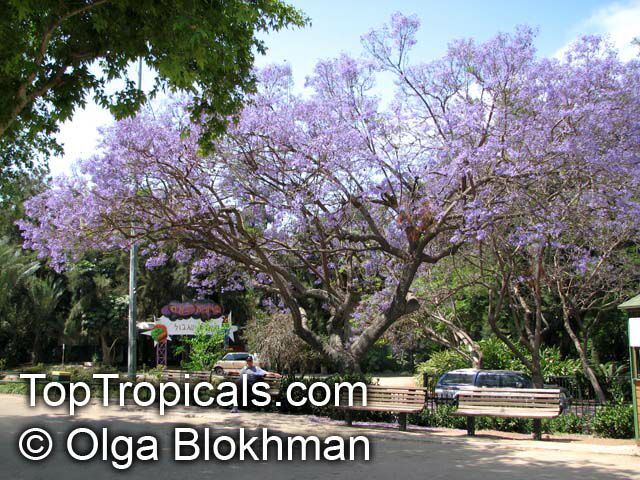 It is only a short period of time that people have once a year to admire the incredible views of the jacaranda trees coloring the streets; but luckily, weather is extremely nice this time of the year. So it is the time to enjoy! And time to dance the tango, of course. As they said in one of the songs: “Your name meaning fragrant, your soul meaning tango. Oh, Jacaranda, Jacaranda…”