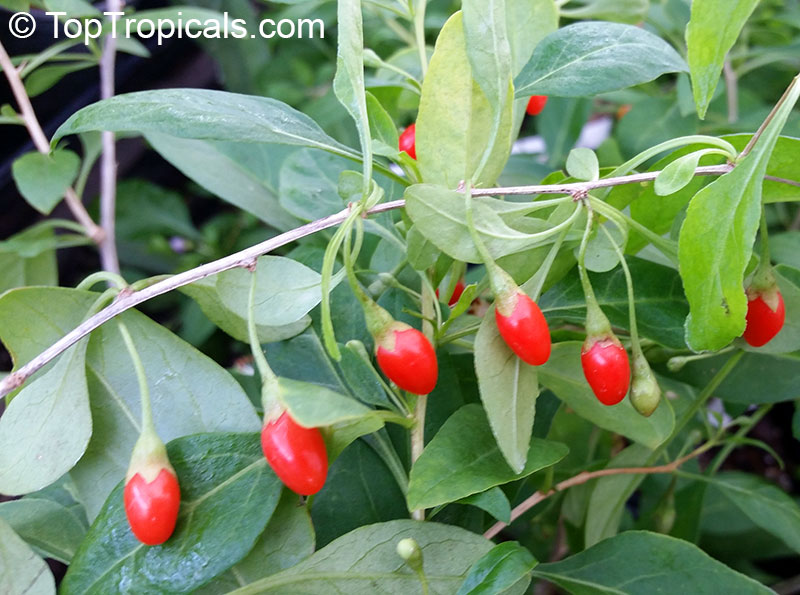 There are two species in the nightshade family Solanaceae from which the Goji berry is harvested - Lycium barbarum and Lycium chinense. Their fruit are similar but can be distinguished by differences in taste and sugar content. These plants are native to China, with present-day range across Asia and South-East Europe. In China, where most of the world's commercial Goji berry production is found, the plant with the highest quality fruit - Lycium barbarum var. Barbarum. 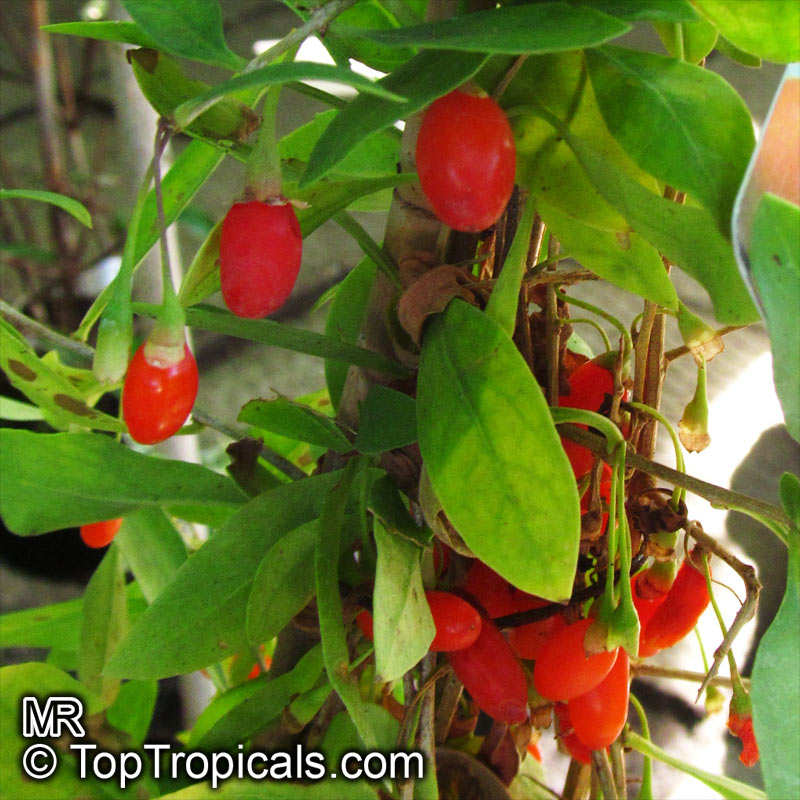 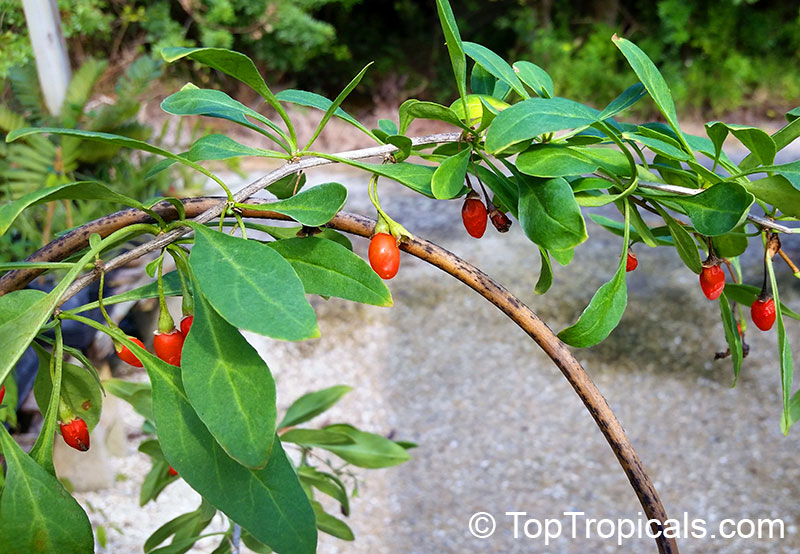 Pretty, small purple-and-white flowers (changing color as they age) in Summer are followed by small oval berries that are orange-red in color; these can be harvested until the first frosts. In the Northern Hemisphere, flowering occurs from June through September and berry maturation from August to October, depending on the latitude, altitude, and climate. Where frost does not occur fruiting is continuous and plants do not lose leaves. 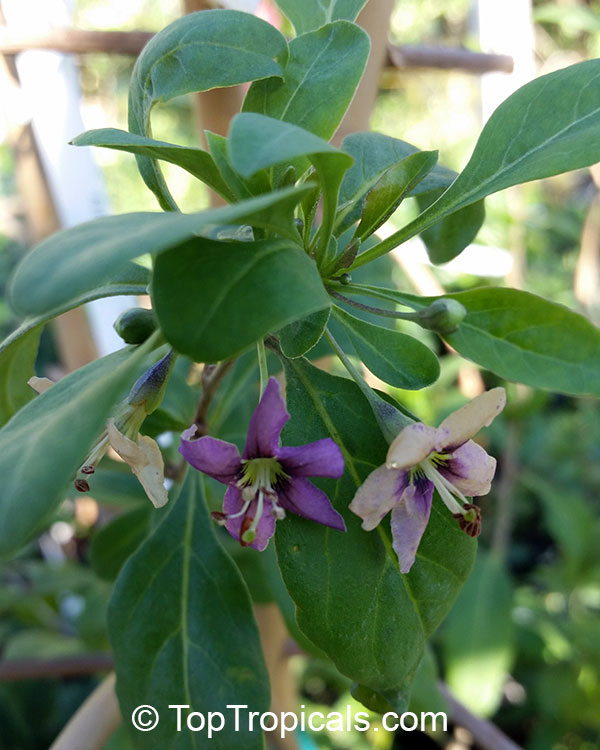 The fruit is a bright orange-red, ellipsoid berry, 1/2" in diameter. The number of seeds in each berry varies widely based on cultivar and fruit size, ranging from 10 to 60! A single mature plant should produce over 2 lbs of berries.

The plants are self-pollinating, but may be cross pollinated by insects. The species is dispersed into natural areas by birds and other animals that eat the fruit. 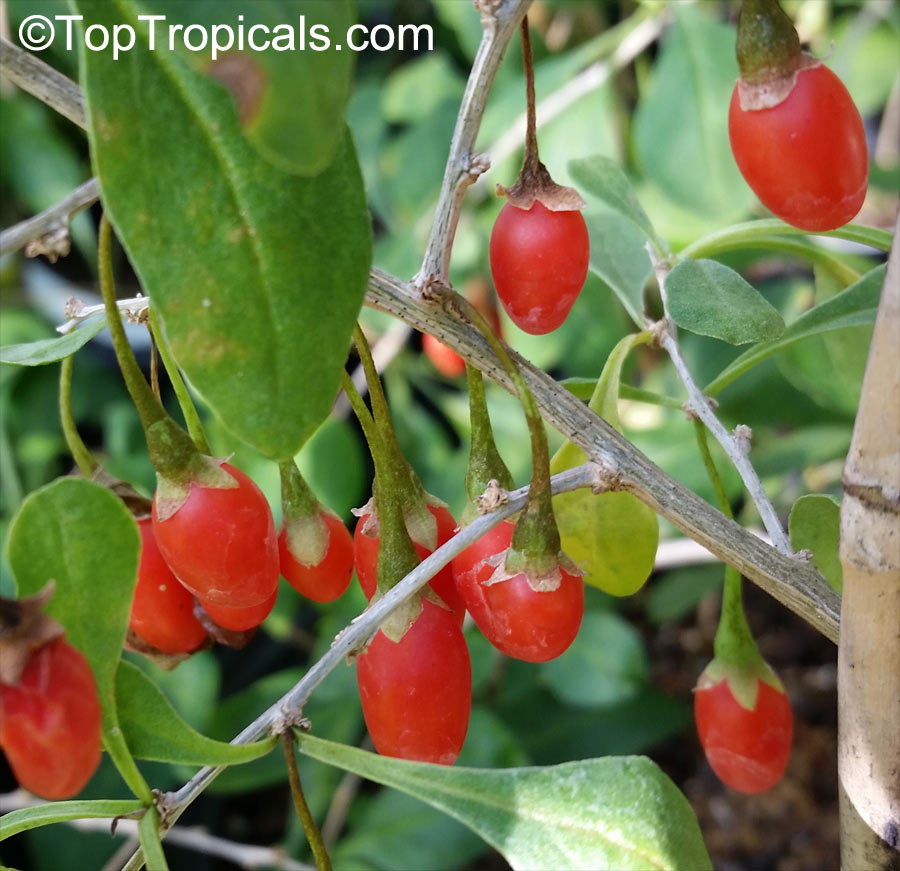 It is considered that Goji berries have exclusively useful, almost magic properties.

According to folklore, people living in the Himalayas who eat Goji berries are reputed to live to between 120 and 150 years old! The famous Li Quing Yuen - a herbalist selling litchi, goji berry, wild ginseng, and gotu kola along with other Chinese herbs, and lived off a diet of these fruits, herbs and rice wine - ate Goji berries on a daily basis. Is said he to have lived to over 250 years...

"...This herb has five names...
You want to take a different part of the herb each season:

In Spring you take its leaves, which are known as the Essence of Heaven.

In Summer you take its flowers, which are known as the Longevity of Life.

In Autumn you take its fruits, which are known as the Chinese Goji.

In Winter you take the bark of its root, which is known as the skin and bone of the Earth, or the Staff of the Almighty Creator.

Taking these four parts in the four Seasons respectively will give your life as lofty as Heaven and Earth..." 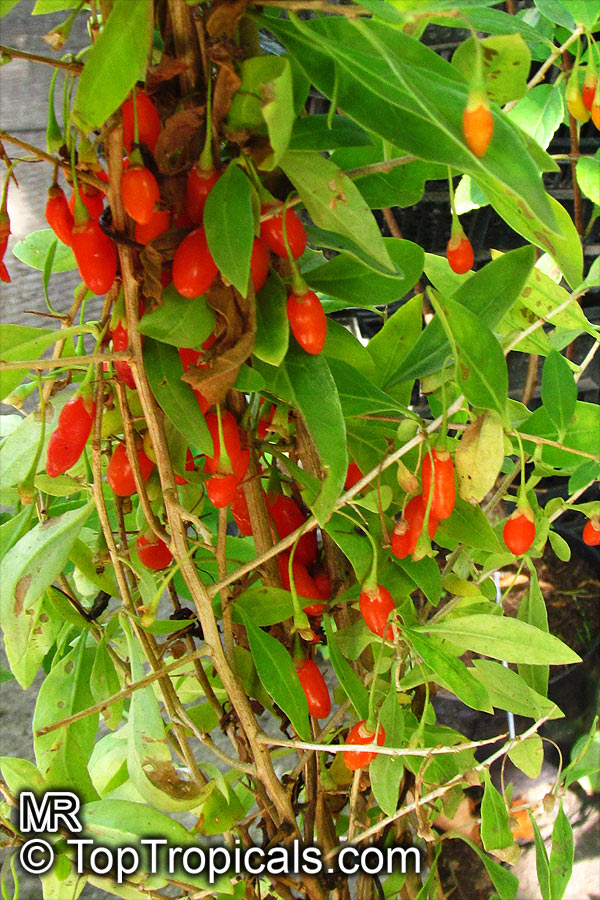 Both species (Lycium barbarum and Lycium chinense) have also been an ingredient in traditional Chinese, Korean, Vietnamese, and Japanese medicine, since at least the 3rd century AD.

Because of its claimed benefits as a drug of traditional medicine, the chemicals present in the fruit, root, and other parts of the plants have been studied in detail. The main compounds in the fruit (23% of the dry mass) are polysaccharides and proteoglycans.
Carotenoid pigments are the second major group. The fruits further contain vitamins, in particular riboflavin (vitamin B2), thiamin (vitamin B1) and ascorbic acid (vitamin C), the latter in a concentration similar to that in lemons. Other detected compounds include flavonoids.

The plant parts are called by the Latin names lycii fructus (fruit), herba lycii (leaves), etc., in modern official pharmacopeias. Since about 2000, Goji berry and derived products became common in developed countries as health foods or alternative medicine remedies. The fruits are used in health foods and supplements and known for powerful antioxidant properties and potential benefits for cardiovascular and inflammation. 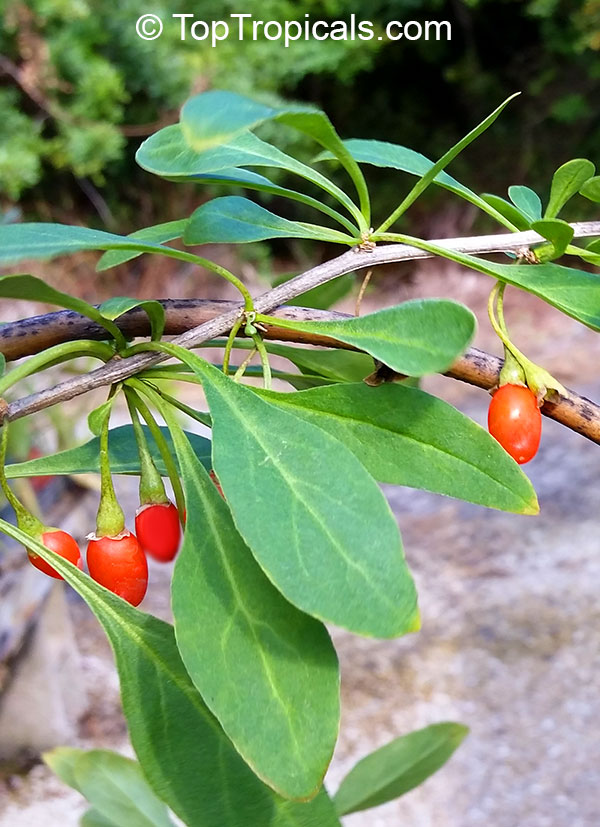 Besides all the health benefits of Goji, this is a lovely fruit that has been long used in traditional Asian cuisine. As food, dried berries are traditionally cooked before consumption. They are often added to rice congee and almond jelly, as well as used in Chinese tonic soups, in combination with chicken or pork, vegetables, and herbs. 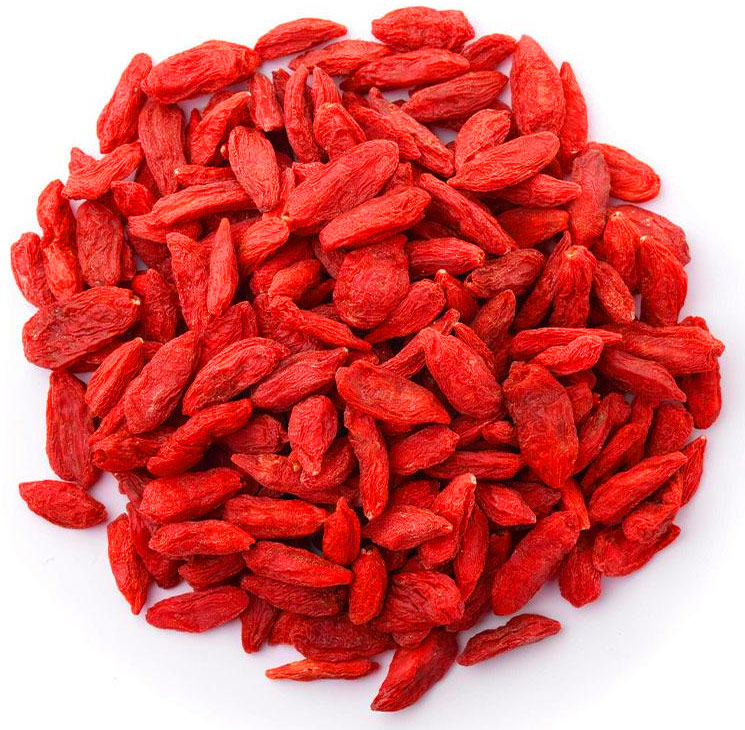 Eat them fresh (it is better to shake the berries from the plant rather than picking by hand as this will cause the fruit to oxidize and become black in color) or dry them and eat them like sweets, or add them to muesli to make your breakfasts power packed. You can even infuse them into a refreshing and healthy tea. Goji juice has extensive biological effects and health benefits. 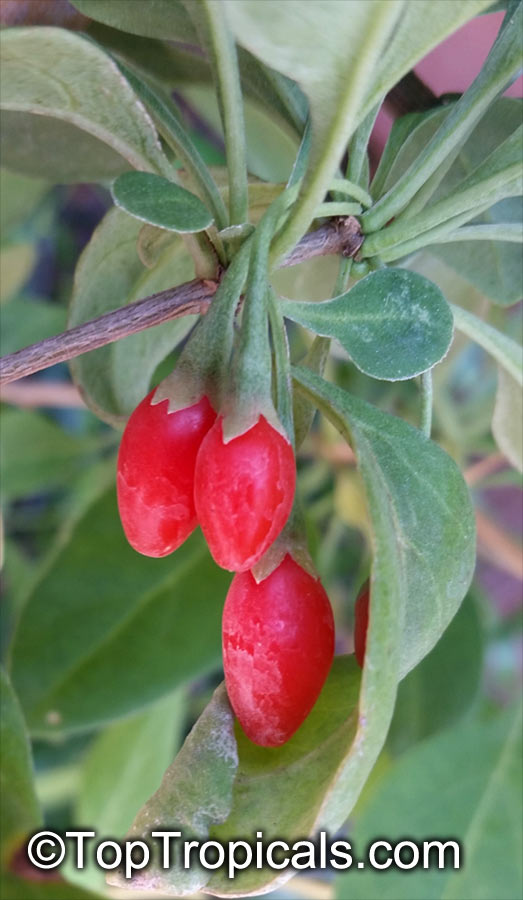 So, the Goji berry…
Full of essential nutrients.
Can help protect against eye disease.
Has anti-bacterial properties.
Is said to have an anti-leukaemia compound within it.
Lifts your mood and makes you feel happy
Will enhance immunity – the great benefit nowadays! 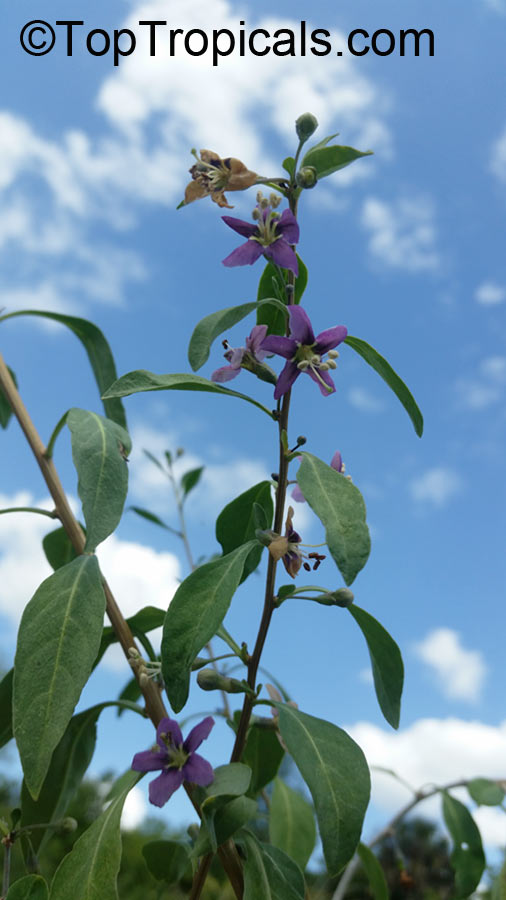 And yet, the plant is easy to grow! Relatively cold hardy tropical, mature plant can withstand some frost. The plants are not picky about soil or water. It is a very fast growing, rewarding plant that can be grown both in the ground in warmer climates on in a pot in areas with cold winters.

Just give it some bright light, a little love and care, and Goji will love you back, it will take care of you!