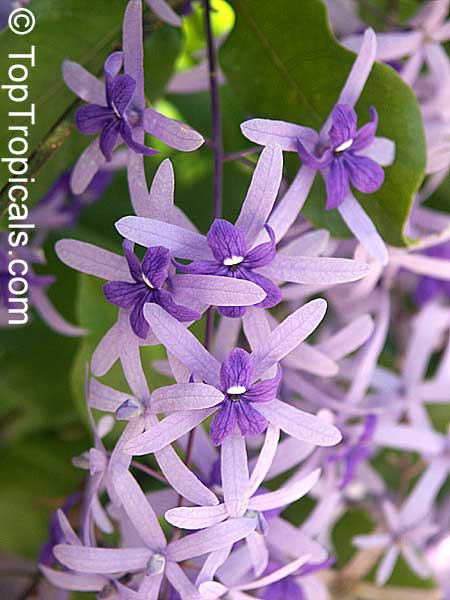 Such a sharp contrast between the soft, delicate flowers and the harsh, crisp leaves of the Purple Wreath is most unexpected! Even the new leaves are stiff and papery. This is a twining vine with rough green leaves and spectacular clusters of purple flowers that come in raceme reaching over 1 foot long. The blue calices, with 15-30 flowers per raceme, remain for many days, slowly turning gray, looking terrific on dark green leaves background. 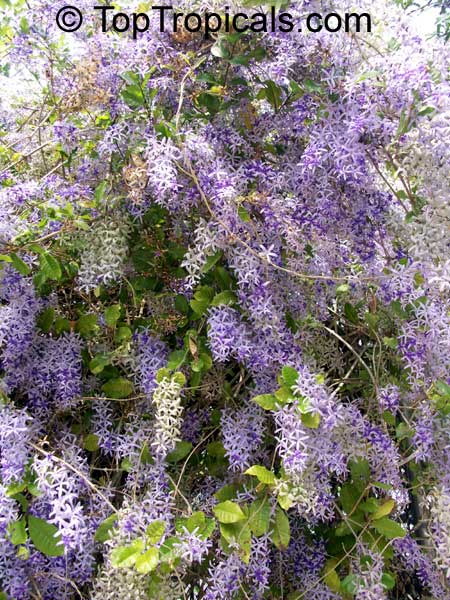 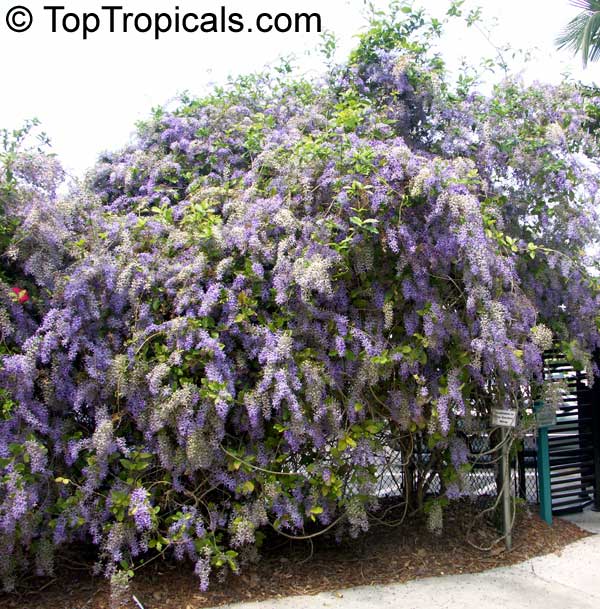 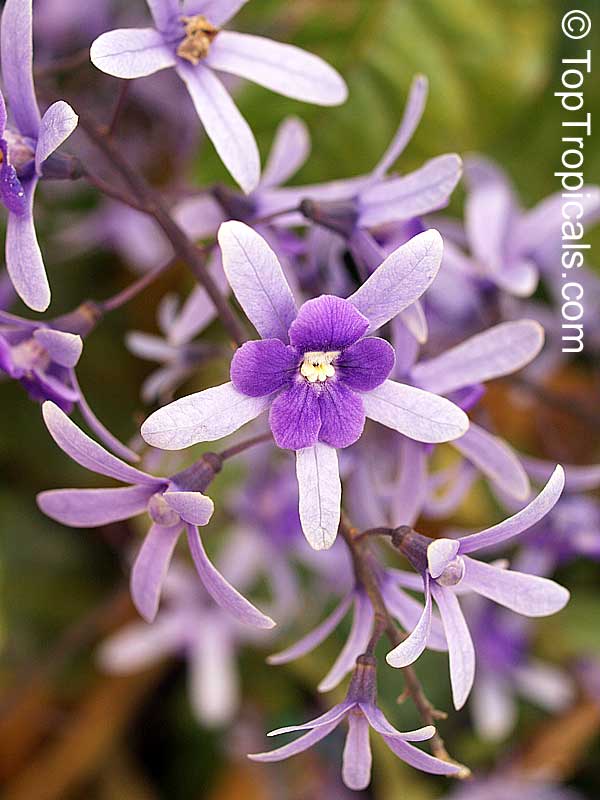 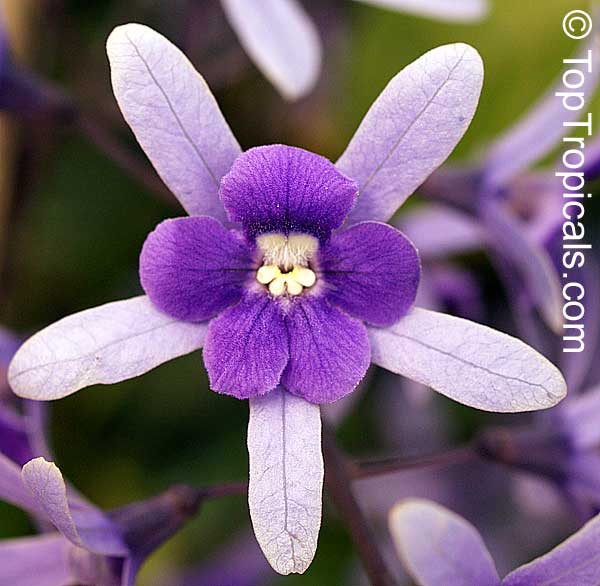 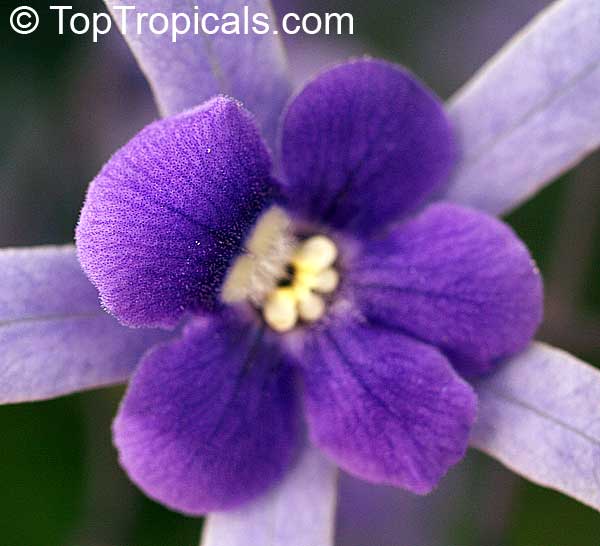 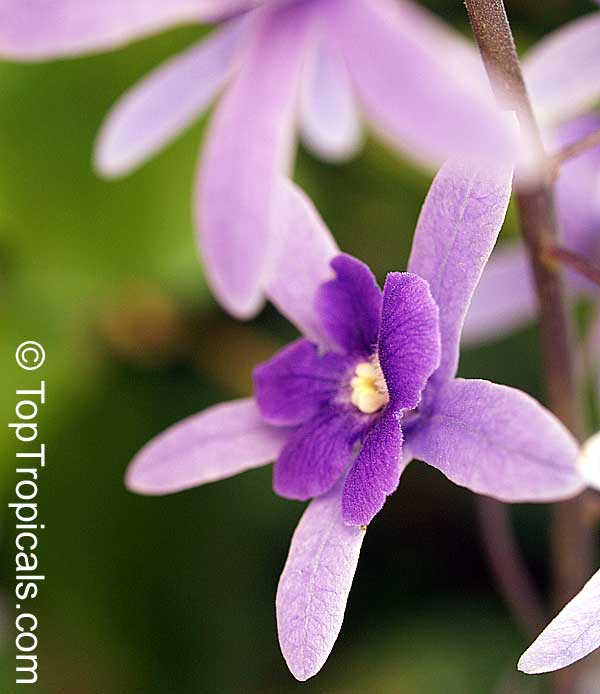 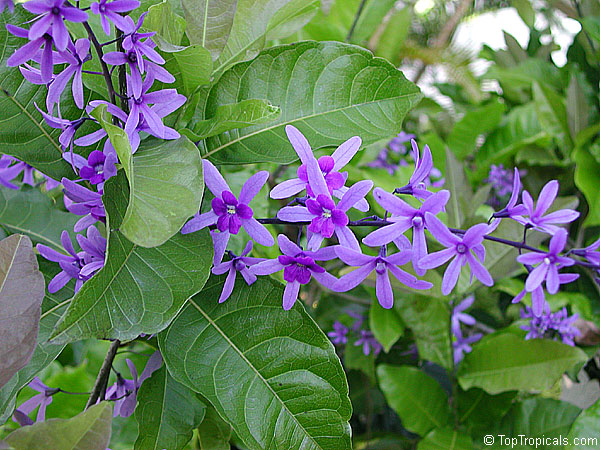 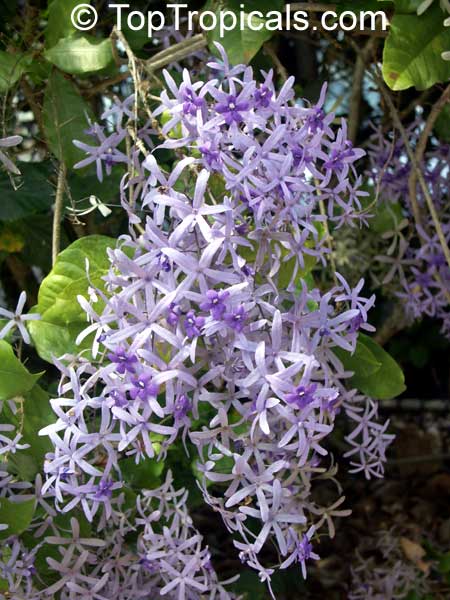 The name Petrea was given to commemorate the name of Lord Petre, who, in the 18th Century, became famous for his wonderful collection of exotic plants. Volubilis means "twining." One of the common names "Fleur de Dieu" means "Flower of God", another - "Sandpaper Vine" - refers to the rough leaves.

The Purple Wreath was introduced from tropical America to other tropical areas many years ago and has always been popular as a garden shrub. Widely grown throughout Caribbean, and variously in the tropics and subtropics, it is cultivated as landscape specimen in Dominican homes, especially on the Atlantic Coast.

Petrea is used usually a climber, but sometimes also over a support where it is encouraged to twine around its own branches. Without support this twining vine grows into a rounded shrub. It also makes a terrific container patio plant, and is well suited for hanging baskets.

Petrea Volubilis is one of the most distinct and beautiful of the cultivated climbers. It looks somewhat similar to a tropical Wisteria. It is a fast-growing woody vine with a grey bark, a strong climber, and will attain great height and cover a considerable area if left unpruned. The star-like flowers are extremely effective when massed. Over a porch or along a fence it makes a glorious show in the spring when the innumerable, long, mauve flower sprays appear. There is also a lesser flowering season towards the end of the summer through fall. In favorable conditions (it likes warm and humid conditions), expect plants to continue producing flowers from winter through summer.

The tapering clusters bear many pale, blue-mauve stars, becoming deeper in color towards the end. They grow nearly in pairs, on a short stem and usually turn so that each flower faces the light. But what we take to be the flowers are actually the calices which remain after the flowers have fallen. The true flower is a small, five-petalled affair of deep purple velvet which may be seen resting in two or three of the end calices. One purple petal has a white splash in the middle. These flower sprays spring from the axils of the leaves and are usually pendent and gracefully arched. The eye-catching parts of each flower are the 5 narrow petal-like calyx lobes that persist long after the darker purple corollas drop.

The oval leaves are quite large - up to 5-9 inches and deeply veined. Stiff and rough, they are a dull-green above and brighter underneath. New leaves are a fresher green but also stiff - never soft and limp like the young leaves of most plants.

Petrea is hardy to the high 20's but not much colder. It grows best in full sun to part shade. It prefers moist soils, but once established, it may take heavy drought. The plant has no severe insect or disease problems. Mulch and use fertilizer for acid plants if your soil is alkaline.

According to indigenous legends, flowers of Petrea were used by Caribs in folk medicine.

This is a charming flower to cut for the house but it will be found that, if the woody stem is cut, the blooms will rapidly droop and die. If, however, the flower-sprays only are cut and arranged in a shallow bowl, they will remain fresh for several days. 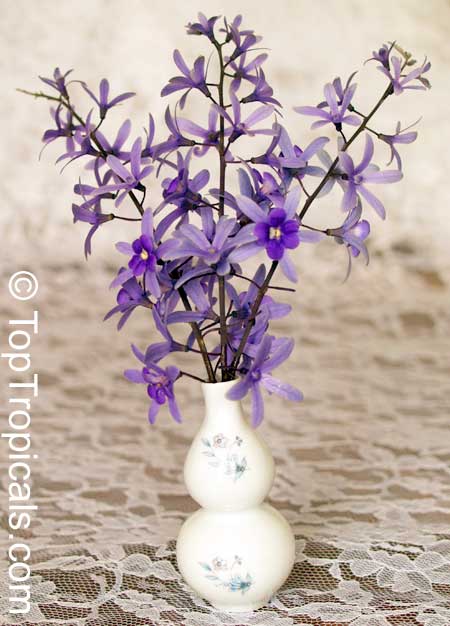 Petrea Vine (March 2007) is in 3 gal container on trellis, large and vigorous, ready to bloom. 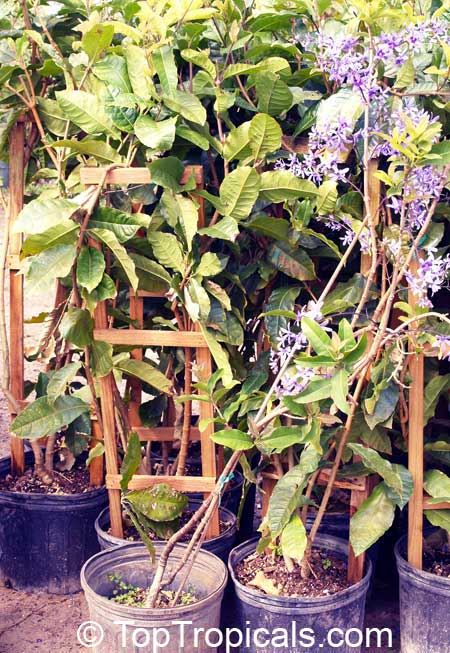 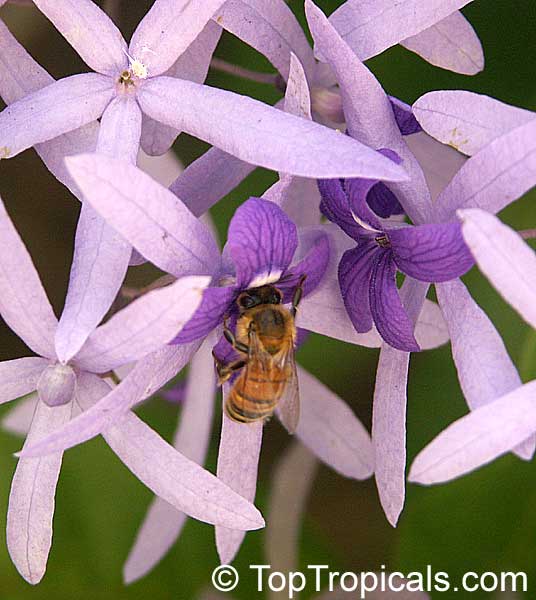 Flowers will attract butterflies and bees 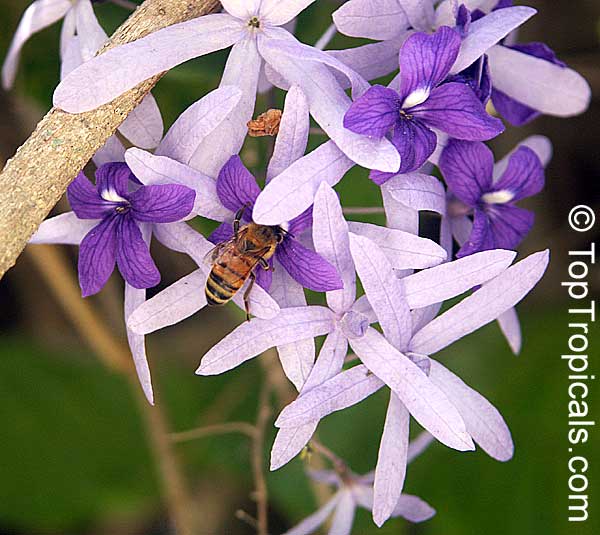 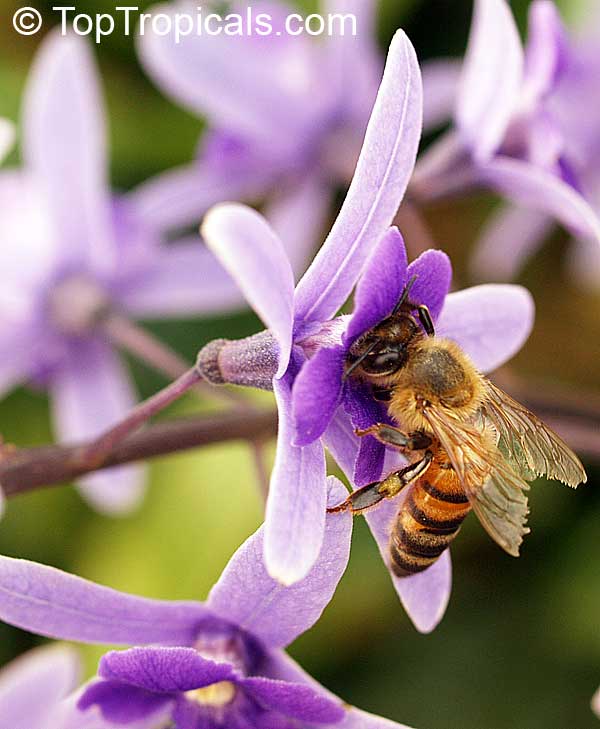 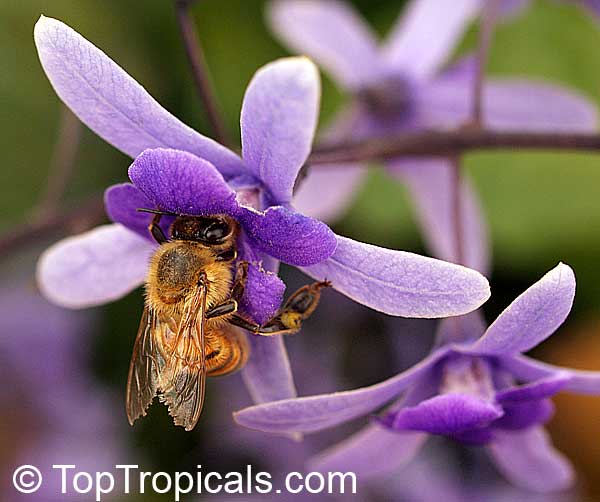 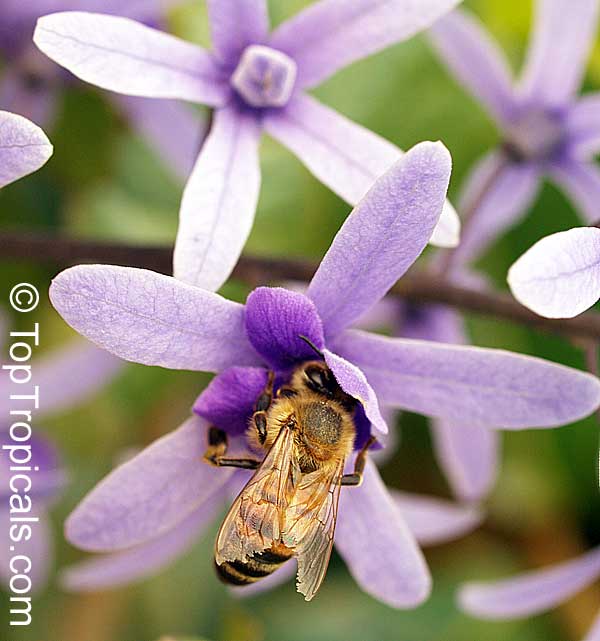 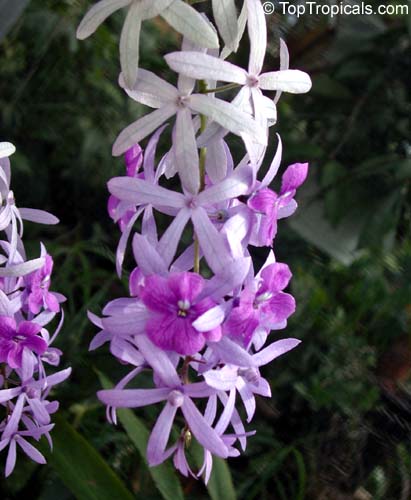 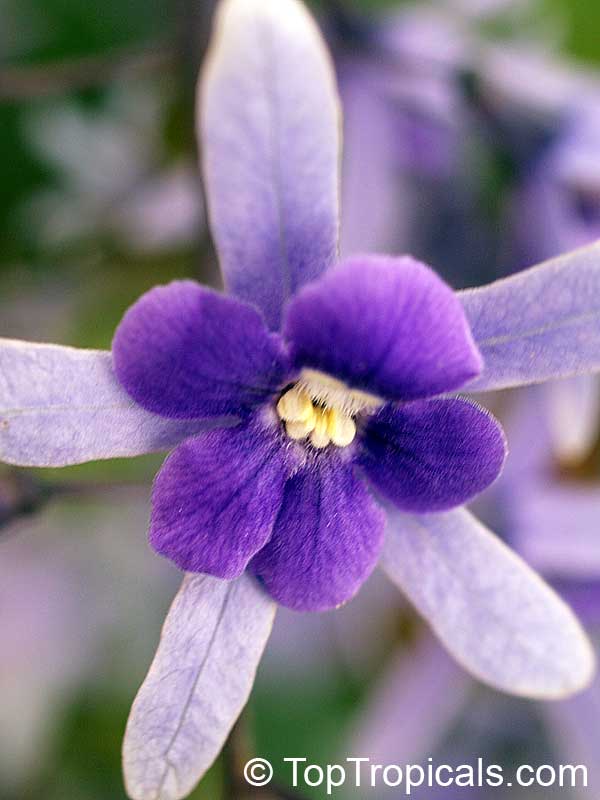