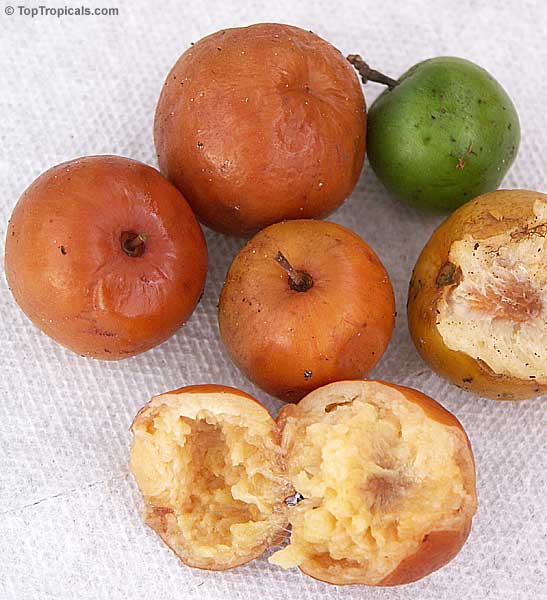 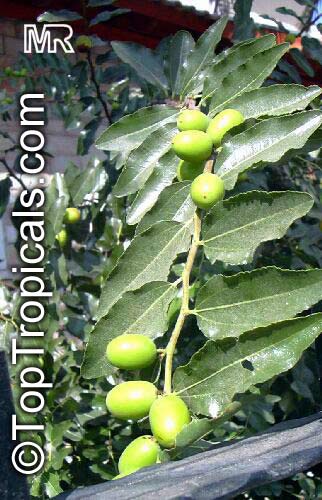 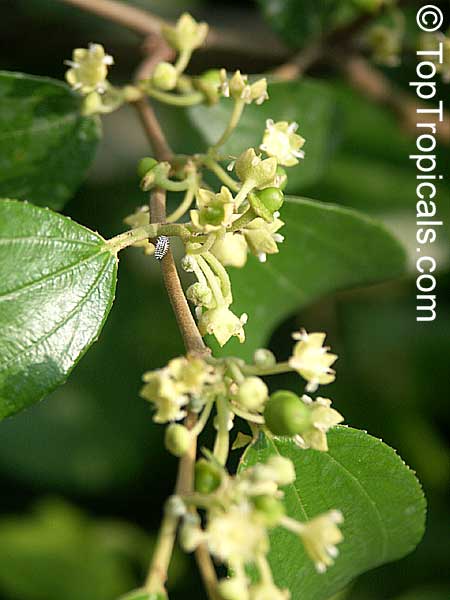 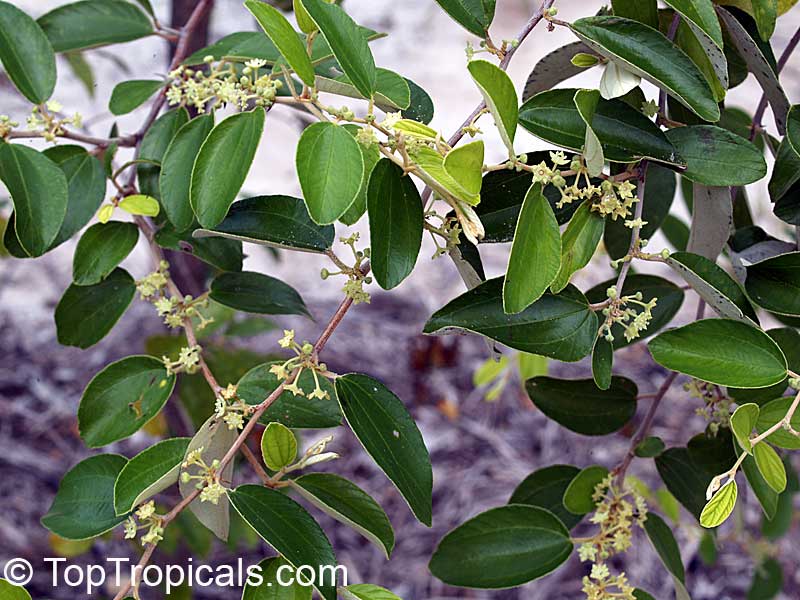 These small acid fruits are liked by children as well as by adults. A small spreading tree, with drooping branches grows readily and quickly on poor ground. Even moderately saline soils are tolerated. The tree is remarkable in its ability to tolerate water-logging as well as drought and will thrive without any special care. The fruits have many medicinal properties, considered to be cooling, tonic and an antidote to some poisonings.

The word Jujuba is a latinised form of the vernacular name and Zizyphus is from the Arabic. Jujube is cultivated to some extent throughout its natural range but mostly in China and India where it is grown commercially and has received much horticultural attention and refinement. The Chinese have been growing and eating jujubes for more than four thousand years. China has more jujube trees than any other type of fruit tree.

Jujube is mentioned very often in Indian legends. According to Ramayana, the tree is hard because Rama blessed the tree for having tried to save Sita and gave it a boon that no matter how badly it was cut, it will not die, and even if a single root of it was left , it will spring up again... and that is the reason for the tree's hardiness and ability to grow in arid zones. In India, the tree is held sacred and is included in many religious ceremonies. The fruits are offered to Siva. There is a Jujube tree growing in the Golden Temple complex at Amritsar, which is known as the "Tree which removes sorrow".

Jujube was introduced into Guam about 1850 but is not often planted there or in Hawaii except as an ornamental. Specimens are scattered about the drier parts of the West Indies, the Bahamas, Colombia and Venezuela, Guatemala, Belize, and southern Florida. In Barbados, Jamaica and Puerto Rico the tree is naturalized and forms thickets in uncultivated areas. In 1939, 6 trees from Malaysia were introduced into Israel and flourished there. In the beginning of XX century, David Fairchild saw great promise in this plant for developing agriculturally barren regions of the Southwest, because jujubes tolerate drought.

Jujube tree is somewhat difficult to describe as it varies so much—not only in size but in the color of the leaf and in the size and shape of the fruit. Sometimes the spines at the base of the leaf stalks are in pairs, sometimes singly and frequently absent altogether. But once the leaf has been examined and the angular, twiggy formation of the branches observed, recognition in any of its forms becomes quite easy.

It is described as a small to medium tree, but one has been recorded which reached a height of 80 feet. At the other extreme it is often met with as a scrubby, prickly growth straggling along roadsides or in waste land alongside the common Lantana.

The thick bark is very dark grey with irregular cracks. In well-grown trees the branches sweep gracefully downwards and, being almost evergreen, the tree is always attractive. The small, scattered leaves do not form a very close crown so the Jujube does not include shade among its many uses. However, the dark, rounded green leaves are very attractive and they have a light undersurface which is almost white. When the leaves flutter in the wind, the tree has a very attractive appearance. The leaves are from one to three inches in length, oval and with three long veins running from the base. Above, the color is darkish green; underneath either tawny, buff, cream or silvery-white and like suede to the touch. Occasionally, particularly on cultivated trees the under side of the leaf is pale green, but the characteristic vein pattern and the way the leaves grow alternately from zig-zag twigs establishes their identity without much doubt.

Two short spines usually appear at the base of the leaf-stalks especially on the flower branches; one is straight and the other curved. In cultivated trees these are sometimes absent. 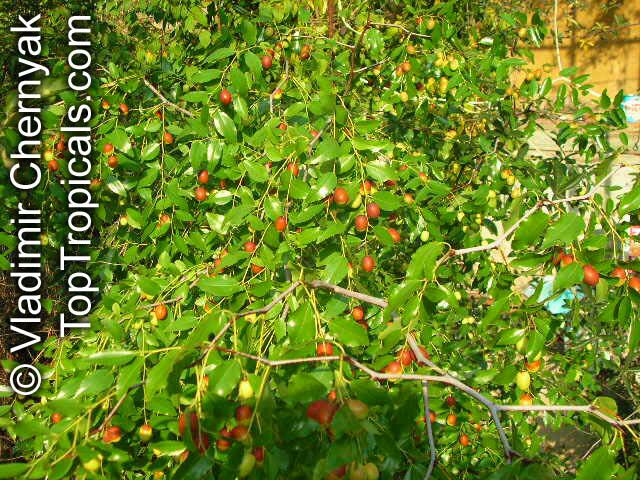 The flowers clustering on slim stems round the leaf stalks are very tiny. From wee, globular buds five triangular petals open forming a multitude of pale green stars. In most flowers when the stamens are the same number as the petals they grow beside the middle of each petal, but in the Jujube the stamens lie between the petals and often below each stamen, is a small ladle-like appendage. Some varieties bear very long flowering branches each with numerous side branches and myriads of clustered flowerlets. Pollen of the Indian jujube is thick and heavy. It is not airborne but is transferred from flower to flower by honeybees, a yellow wasp, and the house fly. Flowers appear around April, earlier on some trees. They are yellowish-white, borne in clusters along the leaf axils and this is shortly followed by the rounded fruit which can be anywhere from three-quarters of an inch to an inch-and-a-half in size. A layer of edible pulp surrounds the hard central stone and the fruits vary considerably in thickness and quality of the pulp. At maturity, fruits are generally light yellowish-orange to almost brown in color. Many people say that when these are eaten fresh, they have flavor somewhat resembling that of a green apple. Older fruits which have been allowed to sit for a few days before being eaten often will have a flavor almost like a date. Like other parts of the tree these fruits vary considerably. The pulp is eaten cooked with sugar when it is very pleasant and the kernel is eaten raw. The wild fruit is mostly used for making sherbert and is widely sold in the market, when ripe—a favourite with kids. In India, the ripe fruits are mostly consumed raw, but are sometimes stewed. Ripe fruits crushed in water form a very popular cold drink. Ripe fruits are preserved by sun-drying and a powder is prepared for out-of-season purposes. Acid types are used for pickling or for chutneys. In Africa, the dried and fermented pulp is pressed into cakes resembling gingerbread. Young leaves are cooked and eaten in Indonesia. In Venezuela, a jujube liqueur is made and sold as Crema de ponsigue. In China, jujubes are eaten fresh, dried, smoked, pickled, candied, and as a butter.

Superior grafted trees may yield as many as 30,000 fruits. If you have an abundance of fruit, it can be frozen for long periods without any deterioration of quality.

The Jujube is an important tree in the dry regions as it grows readily and quickly on poor ground, furnishes good timber, excellent fuel, material for fencing in its branches, fodder for camels and goats and fruit for man. Many parts have medicinal uses and the plant is one of those on which the eri and tasar silk-worms feed. It is one of the best trees in the Punjab for the lac insect. The work of these insects makes a fascinating study. They live on the tender branches of certain trees, sucking the juice and forming a continuous incrustation of an orange-red, resinous substance. These insects occur naturally but, of course, are extensively cultivated because of the value of their secretion. Previously lac was used for dyes but since the discovery of aniline dyes it has been of much less value. Now the resin is used. Purified, it becomes shellac, which comes in various grades, the lowest making sealing wax and varnishes; the higher, gramophone records, polishes, lithographic-inks up to fine lacquer work. Other trees on which the lac insect feeds, are Flame of the Forest, Peepul, Rain Tree and Mango.

In India and Queensland, the flowers are rated as a minor source of nectar for honeybees. The honey is light and of fair flavor.

Different parts of the plant have various medicinal use. The fruits are applied on cuts and ulcers; are employed in pulmonary ailments and fevers; and, mixed with salt and chili peppers, are given in indigestion and biliousness. The dried ripe fruit is a mild laxative. The seeds are sedative and are taken, sometimes with buttermilk, to halt nausea, vomiting, and abdominal pains in pregnancy. They check diarrhea, and are poulticed on wounds. Mixed with oil, they are rubbed on rheumatic areas. The leaves are applied as poultices and are helpful in liver troubles, asthma and fever and, together with catechu, are administered when an astringent is needed, as on wounds. The bitter, astringent bark decoction is taken to halt diarrhea and dysentery and relieve gingivitis. The bark paste is applied on sores. The root is purgative. A root decoction is given as a febrifuge, taenicide and emmenagogue, and the powdered root is dusted on wounds. Juice of the root bark is said to alleviate gout and rheumatism. Strong doses of the bark or root may be toxic. An infusion of the flowers serves as an eye lotion.

Trees can be propagated by seeds, however, seedlings take several years to start fruit production. Superior varieties can be air-layered or grafted. Grafted plants are less thorny than seedlings. When pruning trees, one has to very careful about coming in contact with the short spines along the stems.

Trees grow well over a wide variety of soil types. They do best on sandy loam, neutral or slightly alkaline soils. Even moderately saline soils are tolerated. The tree is remarkable in its ability to tolerate water-logging as well as drought. During hot weather and also in the period of fruit development, irrigation is highly beneficial. Water-stress will cause immature fruit drop.

Jujube seem to have very few insect problems. In wet weather, however, leaf diseases may attack the foliage, causing it to be brown- or black-spotted and unattractive for brief periods. Jujube should be fertilized two to three times a year with a good quality complete fertilizer for good growth and fruiting and the heaviest fruit production occurs during the early spring months. Often trees will bloom again during the late summer or early fall and have a second crop during autumn as well. Mature trees are quite cold hardy and can withstand hard freezing temperatures without cold damage. Young trees, though, need to be protected. 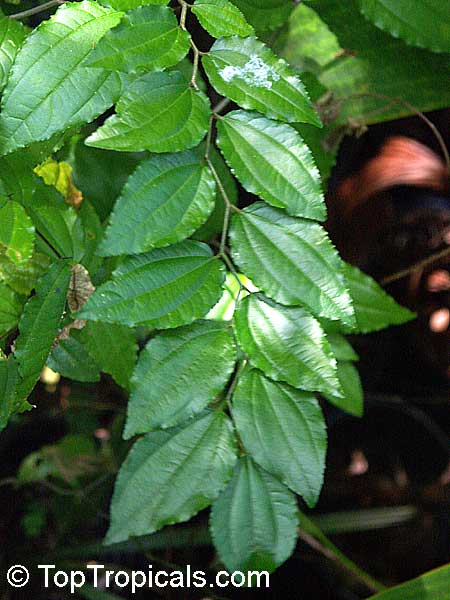 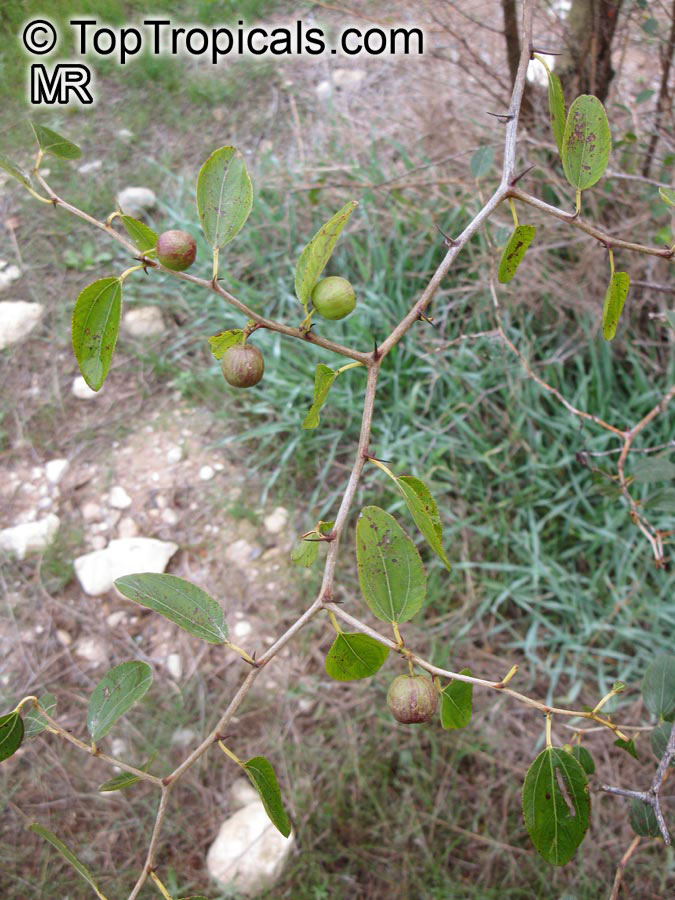 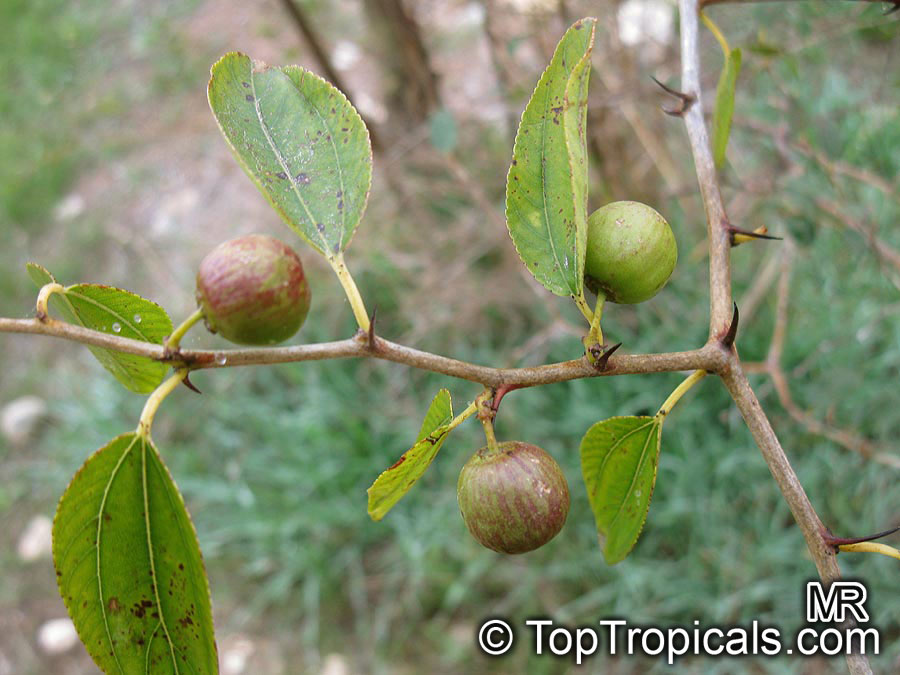 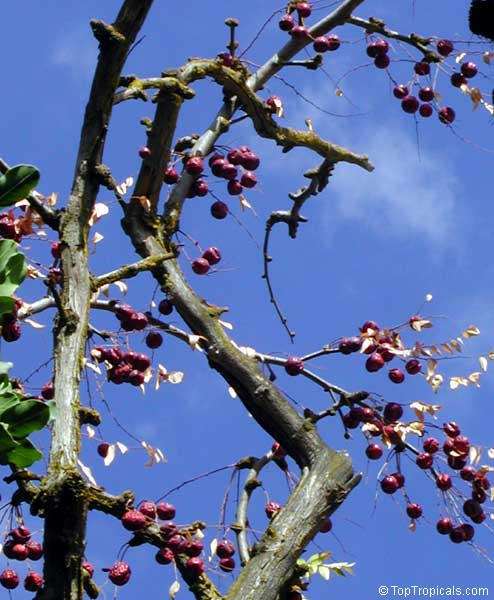