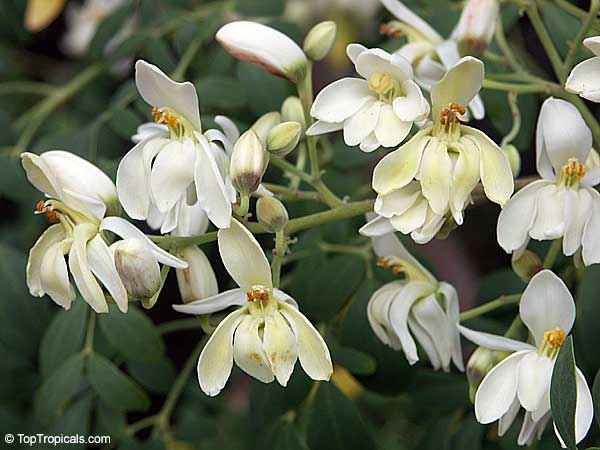 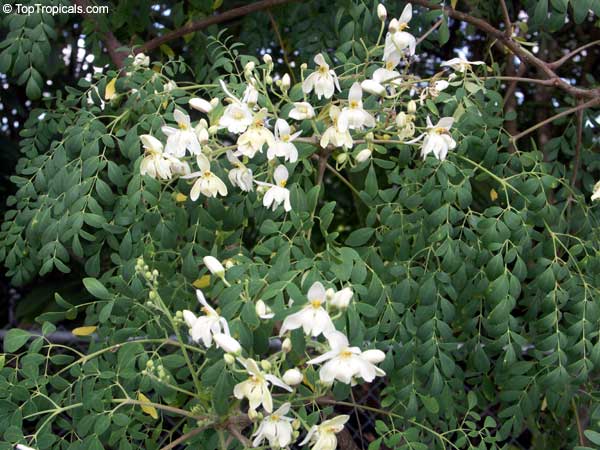 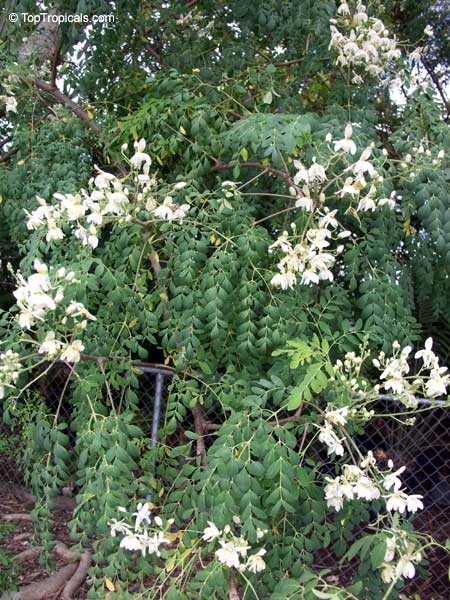 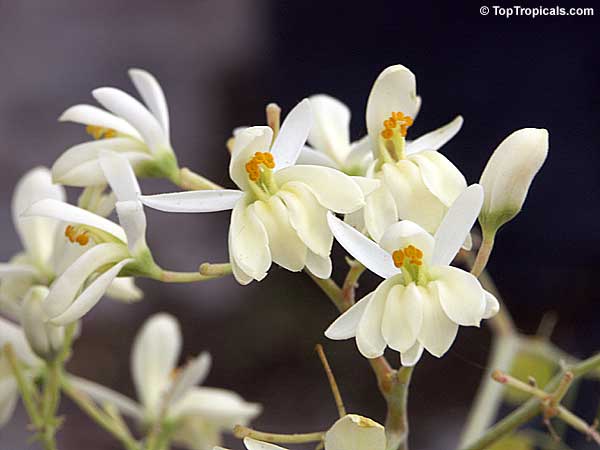 The name Moringa is from the Tamil and oliefera, which is another scientific-name for it, means " oil-bearing."

This tree is sometimes mistaken for a legume. It has delicate foliage and attractive pale white-yellow fragrant flowers that are borne in loose clusters in the leaf axils.

This is a pretty tree, the delicate tracery of its much-divided leaves giving it an airy, graceful appearance. It is very common in Bombay. Presidency where it may be seen in every back garden, waste plot or village. In the Western Himalayas and Oudh it grows wild.

The thick, grey bark is furrowed and comes off in corky flakes. The main flowering season is from February to April but many trees will be seen in bloom from September onwards. The creamy white flowers appear in large, loose clusters, sometimes covering the whole tree in a white froth. Each individual flower is small; the stem bends sharply at the tip and nine of the ten long petals fold back around it. Six unequal stamens bear bright orange anthers. Old flowers turn rather yellow and, together with the new white flowers and the pale green and white buds, the whole spray is a picture of delicate beauty, its sweet honey-scent an added attraction. The fruit starts as a pinkish, twisted tube and takes about three months to attain its full length of anything up to 20 inches, when it is bright green and ridged and contains many winged seeds. This extraordinary pod gives the tree its name of Drumstick and its seeds are a popular ingredient of curries (the drumstick curry of Madras). Boiled it is said to have the flavour of asparagus, and is often pickled.

The distinctive leaves are divided and sub-divided, the ultimate segments being only an inch long. They are oval, borne on tiny stalks and a clear green color. Each leaf is as much as two or three feet long but the pinnae and leaflets are rather widely spaced and the whole does not form a compact and symmetrical leaf. It is like the leaf of the Persian Lilac on a small scale. Pinnae, secondary pinnae and leaflets are all opposite.

As well as having an edible fruit the Moringa is useful in many other ways. The scraped root is an excellent substitute for horse-radish; from the wood exudes a gum which is at first white but later turns yellow and then dark brown. Possibly one of the most useful trees in the world, it produces long green pods that have been compared to a cross between peanuts and asparagus. The roots are used as a substitute for horseradish and the edible leaves make a highly nutritious vegetable. The roots have also been documented as useful in many folk remedies. The flowers, shoots, and foliage are edible as greens. The name derives from the roots, which taste like horseradish and are used as a substitute. Young pods are cooked in curries. Seeds, which taste like peanuts when fried, are eaten, but they contain an alkaloid, which limits their use. The unripe pods, known as `susumber' or `drumsticks,' are cut up and boiled like beans. The outsides of the pods are extremely hard and woody and impossible to eat; one has to pick them up and eat the sticky pulp inside and `pips' which are lightly hot and delicious. Upon pressing, the seeds yield an oil called ben oil. This nondrying oil is used for oiling machinery, in salad oil, and in soaps. The corky bark yields a gum used in India to print calico (cotton cloth with figured patterns).

It is used in native medicine. The seeds yield an oil very similar to the ben oil of watchmakers. Actually ben oil is the produce of another species, M. aptera of Africa. The oil of our tree is used in India for fine machinery and by perfumers as it holds odours which are inclined to be fugitive, but it is not exported and is not as largely used as it might be.

From the bark is obtained a coarse fibre, useful for making mats, paper and cordage.
The branches are lopped for fodder and much liked by domestic animals, especially camels. Cattle are particularly fond of them.