GOLDEN LOQUAT – the symbol of Prosperity

GOLDEN LOQUAT – the symbol of Prosperity 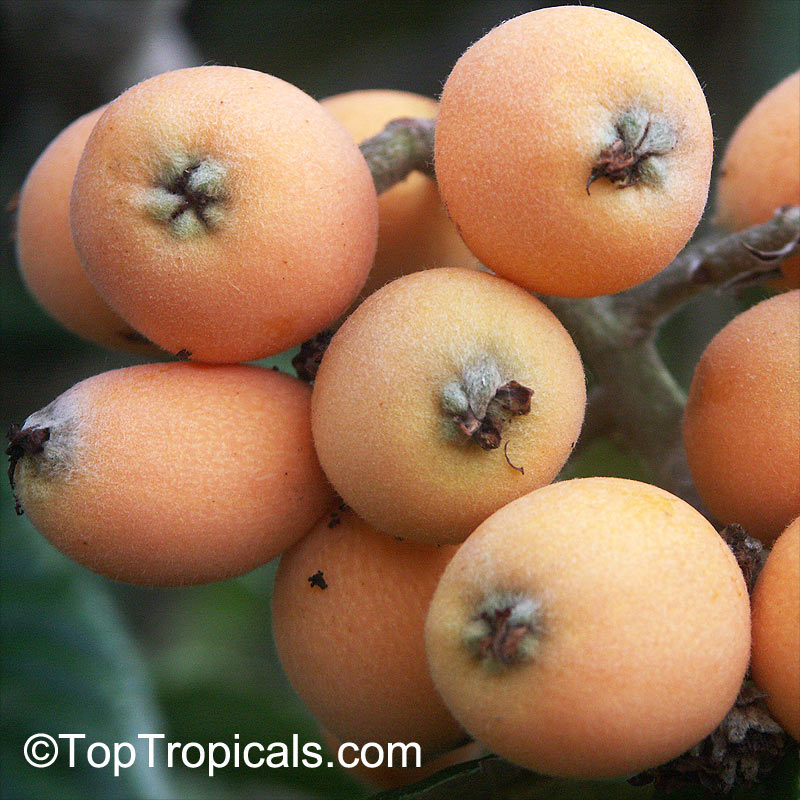 The Loquat (Eriobotrya japonica) is a large evergreen shrub or tree in the family Rosaceae, that contains apples, peaches, plums and cherries, and... of course sweet roses! 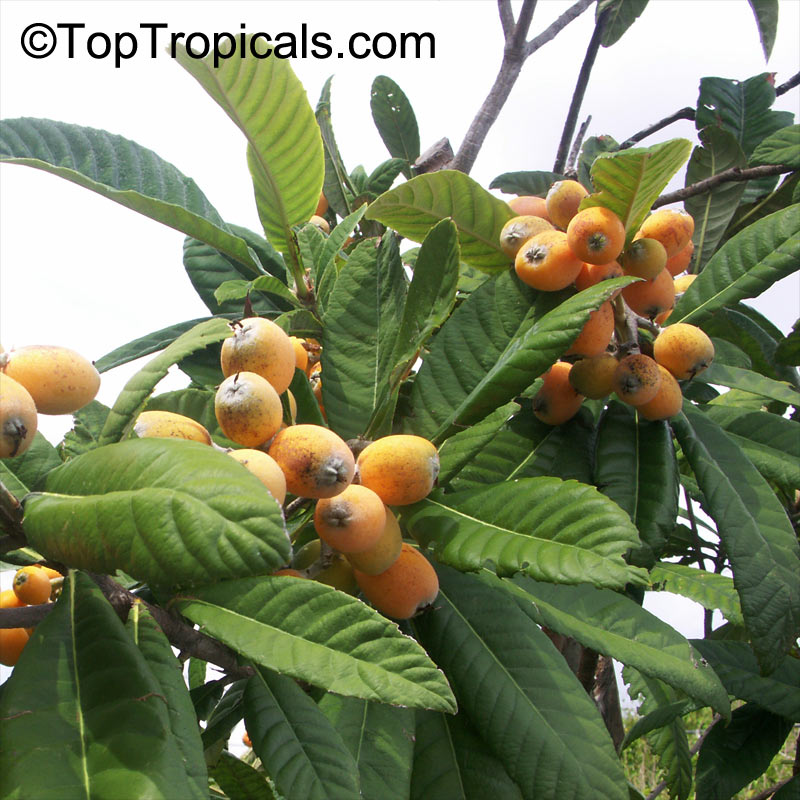 Loquat is native to the cooler hill regions of south-central China. It has been grown in Japan for over 1,000 years, and has been introduced to regions with subtropical to mild temperate climates throughout the world. 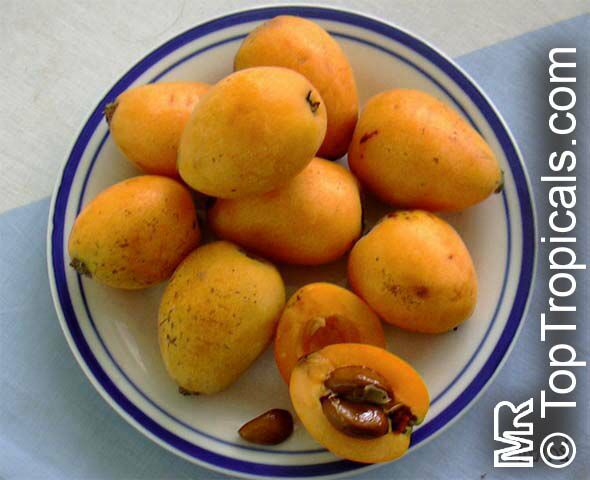 Wonderful, useful, reliable little evergreen tree, Eriobotrya japonica has a rounded crown, short trunk and woolly new twigs. In favorable conditions, the tree can grow up to 20-30 ft tall, but is usually smaller,10-15ft. 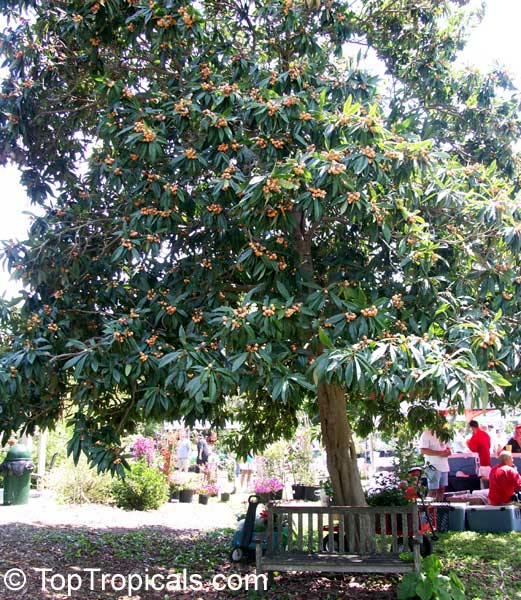 The foliage is particularly distinctive, with large, evergreen leaves borne in spurts of fresh green and a dusty coating that gradually sloughs off as the leaves age. 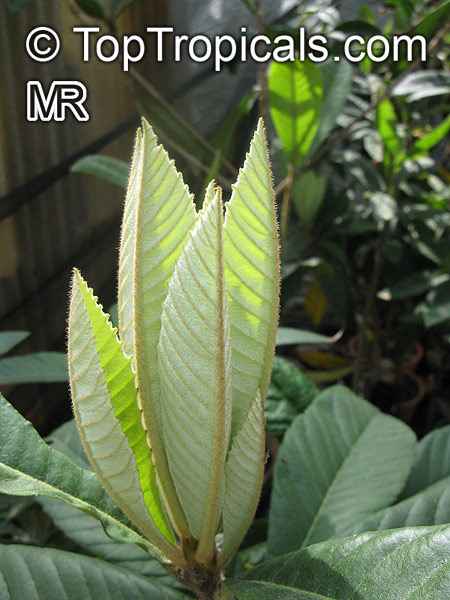 The flowers are 1" in diameter, white, with five petals, and produced in stiff panicles of three to ten flowers. Looking very similar to Apple or Cherry blossoms! They are rich of nectar and pollen, and have a sweet, heady aroma that can be smelled from a distance, attracting bees and other pollinators.

Loquats are different from most fruit trees: the flowers appear in early winter, and the fruit ripen at any time from early Spring to early Summer. In Florida, we harvest them in April-May. Loquat fruit, growing in clusters, are oval, rounded or pear-shaped, 1-2" long, with a smooth or downy, yellow or orange, sometimes red-blushed skin. Each fruit contains from one to ten ovules, with three to five being most common. The succulent, tangy flesh is whitish, yellow or orange and sweet to subacid or acid, depending on the cultivar. The fruit are the sweetest when soft and orange. The flavor is a mixture of peach, citrus and a mild mango. 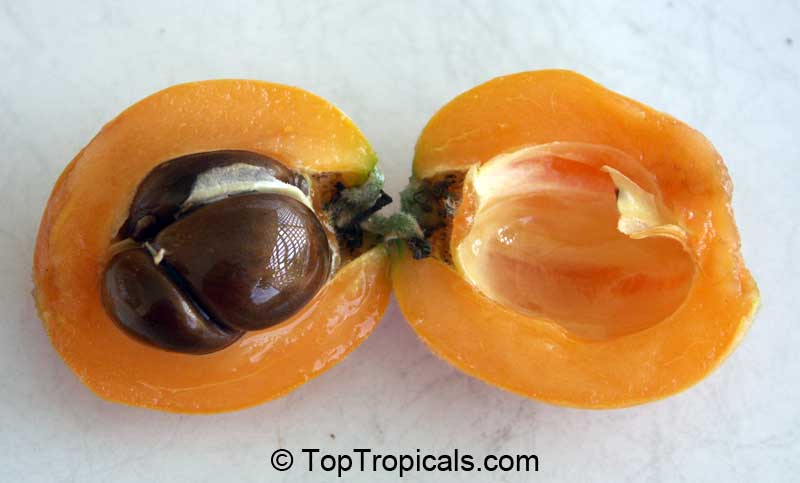 The loquat has a high sugar, acids, vitamins B and C, minerals and pectin content. It is eaten as a fresh fruit and mixes well with other fruits in fresh fruit salads. The fruit are also commonly used to make jam, jelly and chutney, and are often served boiled in light syrup. Firm, slightly immature fruits are best for making pies or tarts. 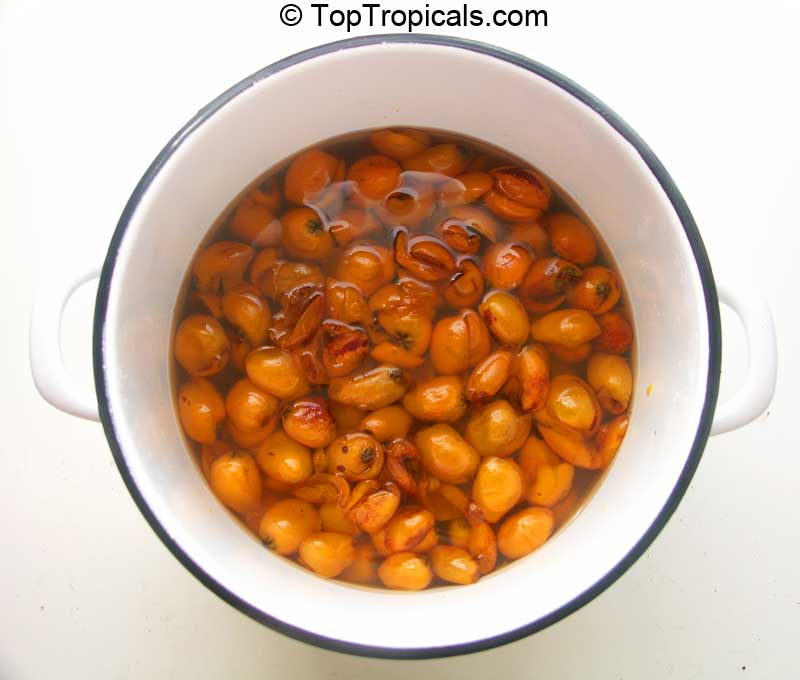 Loquats can also be used to make light wine. They are fermented into a fruit wine, sometimes using just crystal sugar and white liquor. Loquats are used commonly as a natural sweetener for many different types of food in some places across the world. Many people use loquats to create sauces since the acidity goes well with the sweetness. This is another reason why it is popular to make pies, loquat bread, and pastries. 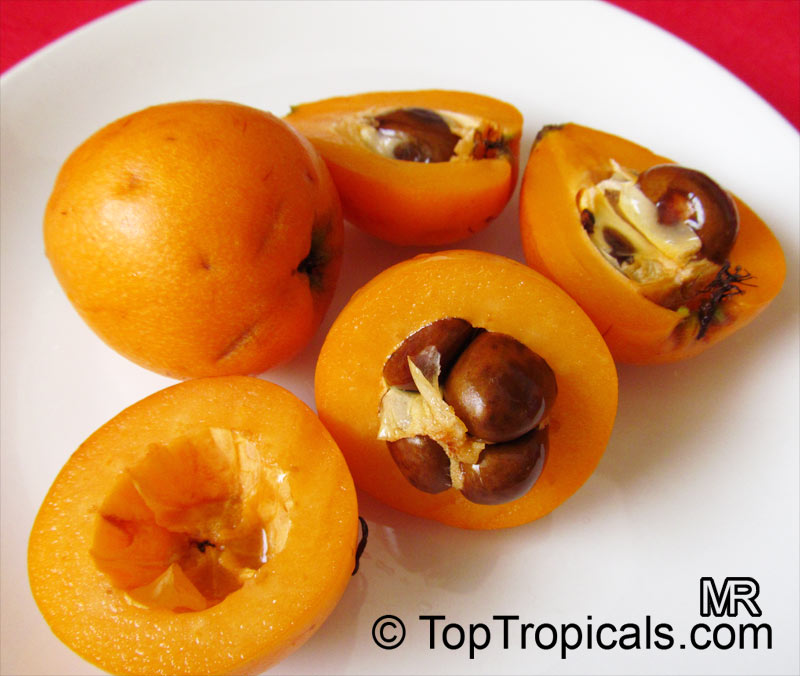 The loquat is a wonderful tree, ideally suited to small gardens thanks to its compact growth habit. The plant is very fast growing, drought tolerant, and cold-tolerant to mild frost. It is an ideal fruit tree for the beginner. 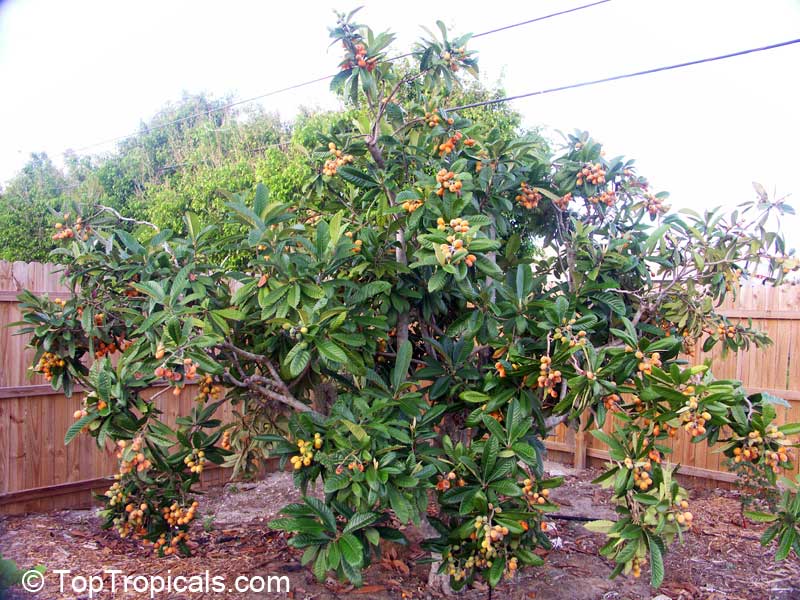 In frost-free areas Loquat trees grown commercially for fruit production or as landscape ornamentals near decks or patios.

Outside of Tropics, it is a good street tree in areas where fruit does not set, and effective houseplant in colder climates. For best results, grow Loquat in full sun or partial shade in well-drained soil. Choose a sheltered spot to avoid wind damage to the leaves provide the best chance of fruit. 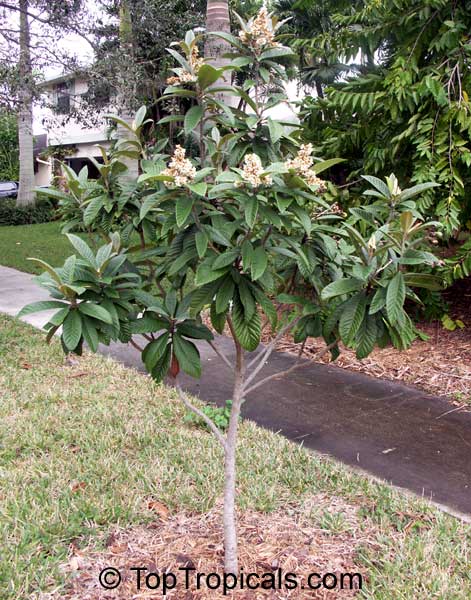 In China, the Loquat because of its golden color, represents gold and wealth. It is often one in a bowl or composite of fruits and vegetables to represent auspicious wishes or the "Five Prosperities" or wurui. 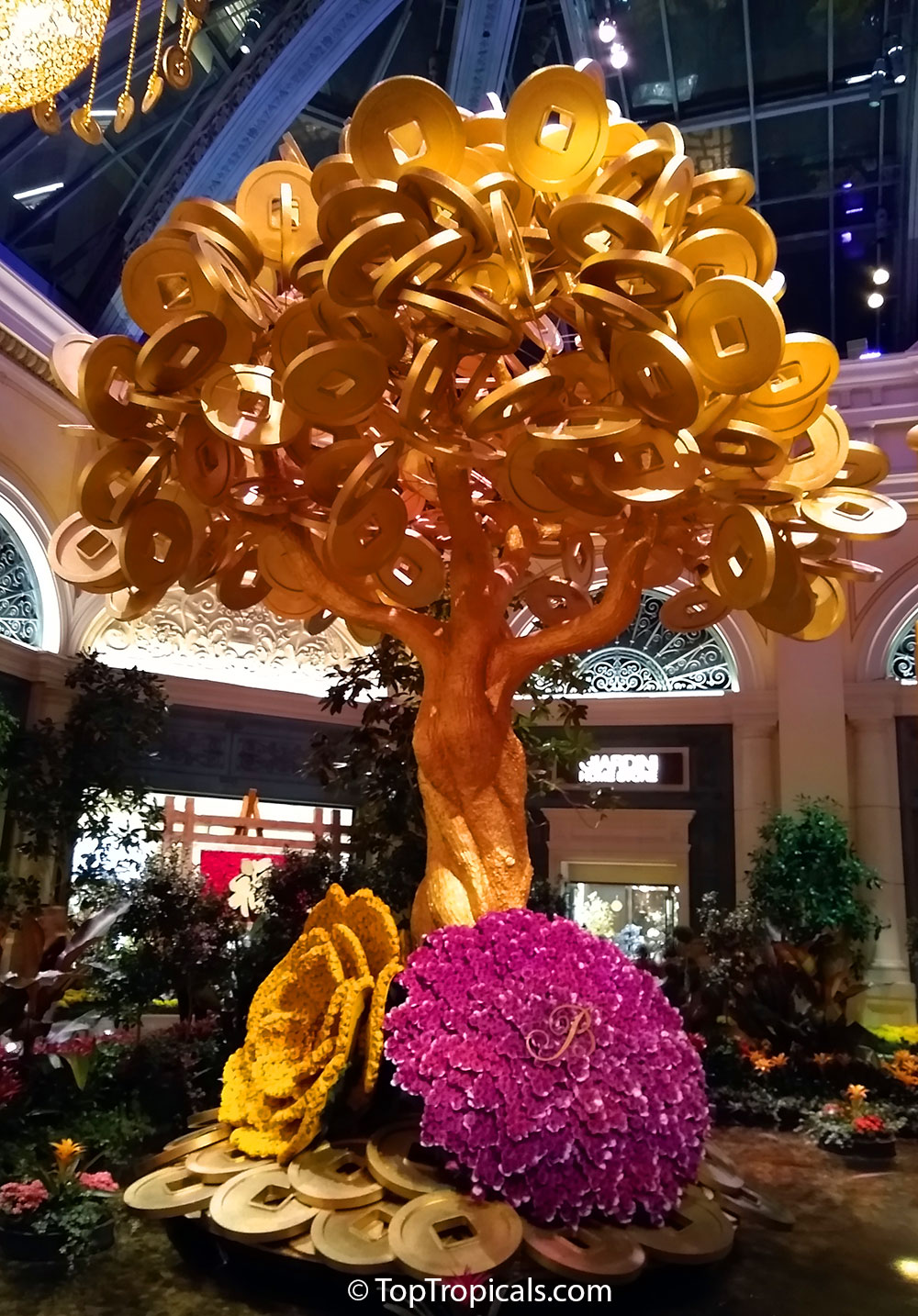 The most superior grafted varieties are available from TopTropicals, such as Bradenton, Champagne, Christmas, Oliver, Italy, Wista White, Yehuda, Gold Nugget, Sherry Woods, and others.