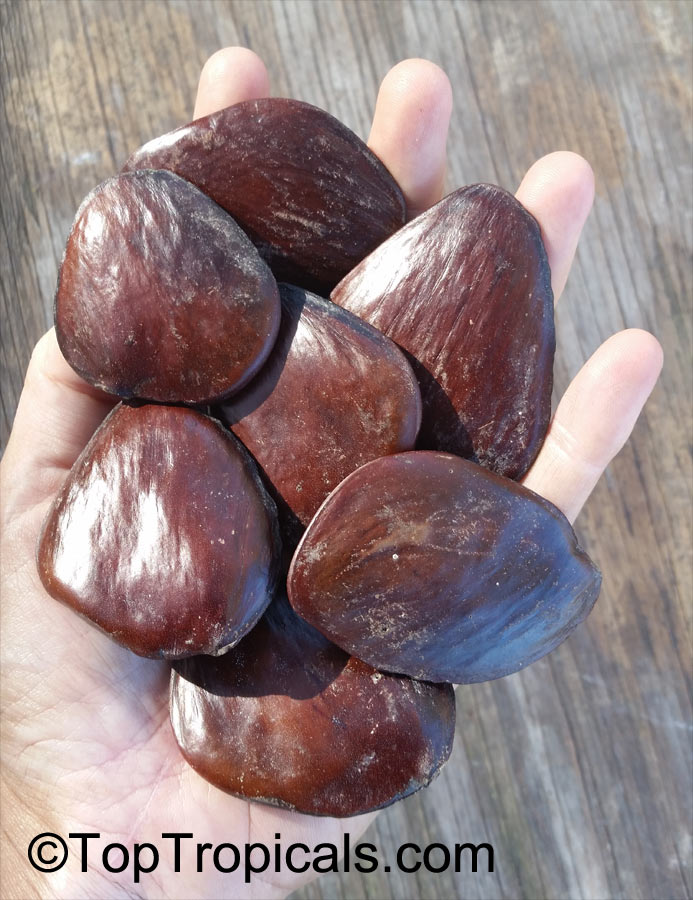 The medium-sized tree grows to a height of 10-20 feet and thrives in full sun, but is sensitive to low temperatures and requires moderate water. Its leaves are dark green and are composed of four leaflets, hence the species name macrophylla. Pentaclethra macrophylla flowers from February to April appearing in clusters with many colors, from pink to white and off-white.

The fruits of Pentaclethra macrophylla are green and resemble large beans, with some individual fruit reaching 12-18 inches in length, but on average they are 8-10 inches in length. When ripe, the fruits split open to reveal a row of five large, shiny black seeds. Because of this, Pentaclethra macrophylla has also been known as "five-angled bean."

The fruits of Pentaclethra macrophylla are loaded with nutrition and health benefits. Each tree can produce up to several hundred fruits, with each of the fruits containing 5-6 seeds. These seeds are known to be rich in antioxidants and minerals such as iron, magnesium, phosphorous and zinc. The seeds are also known to be high in proteins and essential fatty acids. The oil extracted from the seeds can be used for cooking as well as for medicinal purposes

Aside from its usefulness as an oil and snacks seed, Pentaclethra macrophylla has also been used in traditional medicine. The plant, leaves, roots and bark of the tree have been used in many traditional recipes. The people of east and western Africa use the plant to treat a wide range of disorders including gastrointestinal problems, fever, mycosis, and snakebite.

Pentaclethra macrophylla is mostly grown in USDA Zone 9-11 and can be successfully grown in a pot in cold regions. It requires a slightly acidic or neutral soil with good drainage and partial sunlight. The soil should be kept moist during the warmer months, while in winter it should be allowed to dry out slightly and watered sparingly. The plant should be fed with a balanced fertilizer in the spring and pruned in early summer to encourage new growth. Pentaclethra macrophylla is known to be resistant to most plant diseases and can tolerate mild frost.