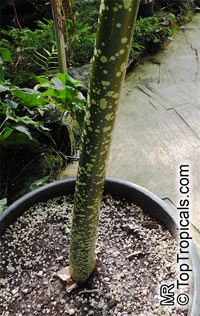 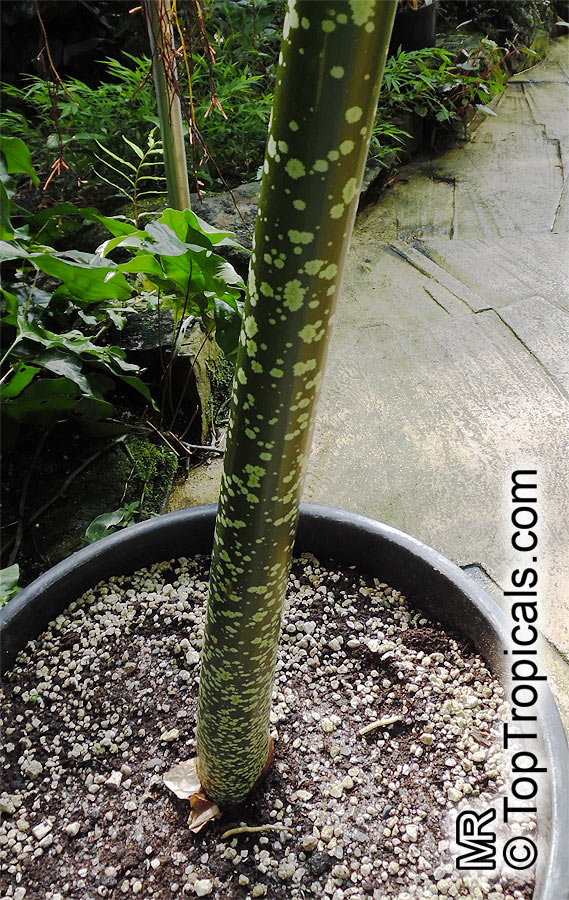 Amorphophallus species are herbs with an underground storage organ. This is usually a tuber. One single leaf emerges from the tuber, consisting of a vertical petiole (stalk) and a horizontal leaf-blade. The latter is dissected into few or numerous small leaflets. Once plants are mature an inflorescence may develop. The inflorescence may replace the leaf in one season, or develop alongside it. From winter dormant tubers emerge an umbrella like plant with beautiful speckled stems. Large flowers will emerge from mature plants in the spring. When the spathe opens the female flowers are receptive and must be pollinated that same day. The opening inflorescence emits an attractant scent. In Amorphophallus this scent has diversified considerably. In most species the scent is anything but pleasant, and reminds one of varieties of death, decay, sewage, gas and the like. A few species develop a scent that is actually pleasant to the human nose (e.g. carrot-like, anise, chocolate, fruity, lemon). After successful pollination most parts of the spathe wither and drop off, after which the individual female flowers develop into berries, containing the seeds. These berries are usually red or orange-red, but occasionally blue, white, or yellow-and- white. Amorphophallus thrives in a rich loamy soil in partial shade. Compost should consist of 2 parts loam to 1 part peat moss to 1 part sand. Keep the plant evenly moist all through the growing season. Keep dry during dormancy, keep moist during growing period. Fertilize monthly with a houseplant fertilizer. Water should be gradually withheld starting in October until the leaf withers. Store corms at a temperature above 50 degrees. They can be brought into active growth in late March. If the corms are strong enough, a blossom will soon be produced. The leaf follows soon afterwards. A. bulbifer definitely dislikes low humidity - the leaflets may partially desiccate; this seems to be more pronounced in low light. Also, in low light, the leafes become exceptionally dark green, with nicely contrasting pink margins. Such plants have to be moved to brighter light very gradually. In bright light, the leaves are bright green, with pinkish margins less pronounced. Other species: konjac, titanum, and much more...

Amorphophallus konjac is one of the largest flowers, a perennial exotic Asian plant. It grows a single, elongated center called a corm and a single large leaf that wraps around it. The corm is the part of the plant that is used, as well as its tuber, which is commonly called the konnyaku potato. Amorphophallus konjac acts as a diet aid that has many benefits. Its ability to swell when mixed with water allows it to fill the stomach. It also moves through the digestive system very slowly, making the appetite feel satisfied for a longer period of time. This characteristic of Amorphophallus konjac is beneficial in treating obesity. It is one of the most exotic, bizarre flowers. Can be easily grown in a pot as a house plant. The single leaf dormant in winter, then in spring the plant shoots out a fantastic flower. 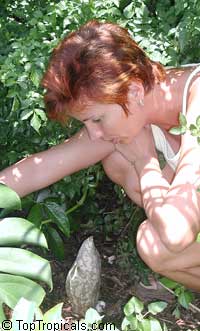 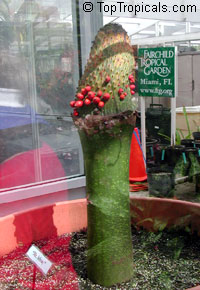 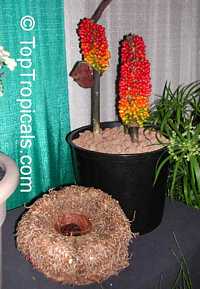 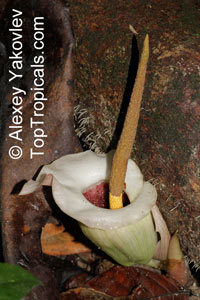 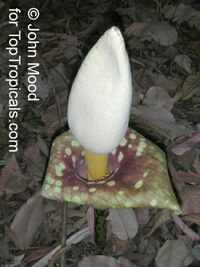 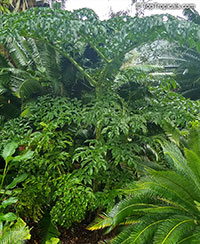 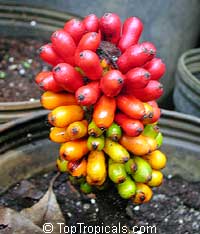 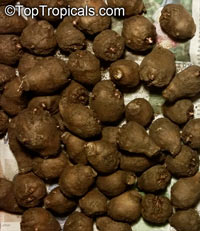 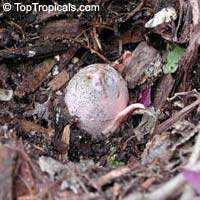 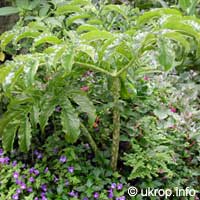 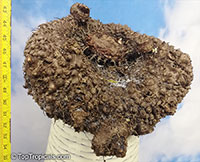 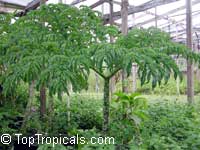 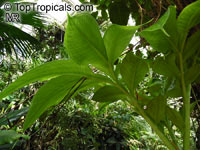 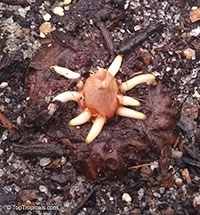 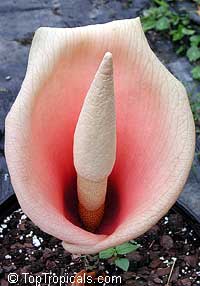 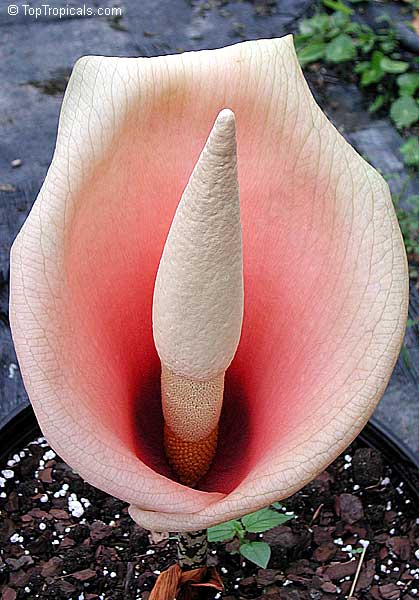 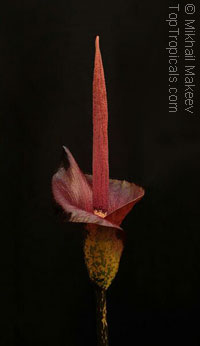 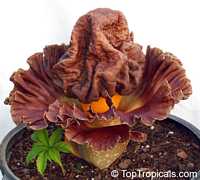 
See photo of the actual tubers for sale

Grown in
6"/1 gal pot
Notify me when available