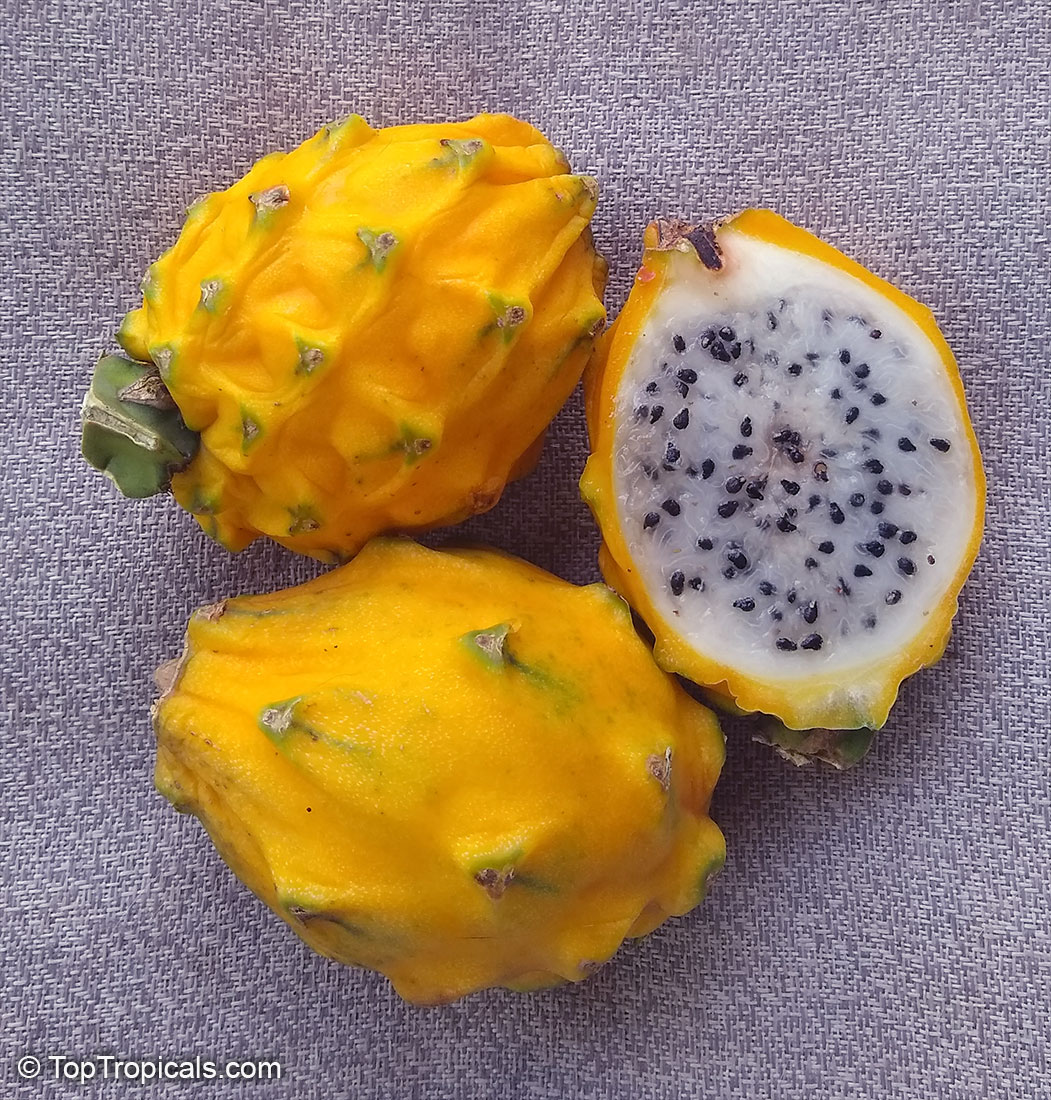 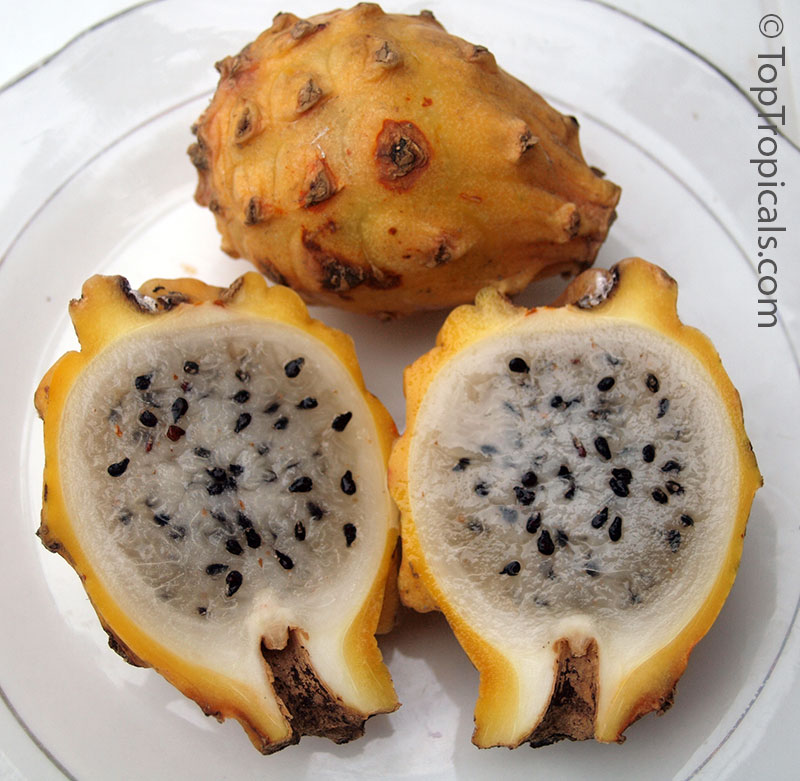 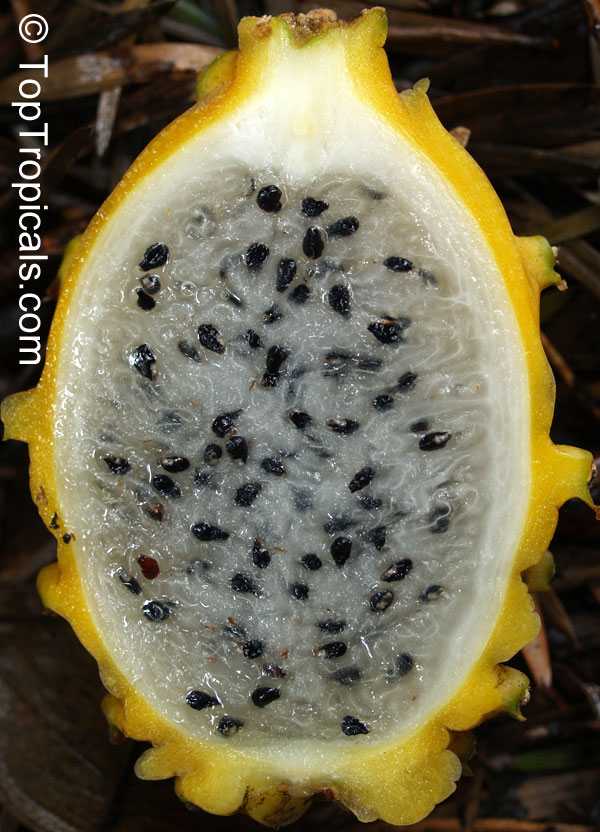 This cactus originates from Bolivia, Equador, Peru and Columbia. It's greatly known for it's sweet tasting fruit. Knobbed, yellow cactus fruit sharing some similarities with the dragon fruit (pitaya). Taste is said to be superior to most cactus fruits. The fruit is popular eaten chilled, out of hand. It is also used to flavor drinks and pastries.

A vining, terrestrial or epiphytic cactus, with fleshy stems reaching from a few inches up to 20ft long (in mature plants). The fruits are smaller than the common dragon fruit, and contain prominent spikes until ripening time, upon which the spikes drop off. Prefers partial sun and can tolerate down to 32F, but typically doesn't want to see below 40F. The vines tolerate very high temperatures as well.

Commercially grown to a limited extent in Columbia. Fruits are occasionally exported to Europe and Canada. 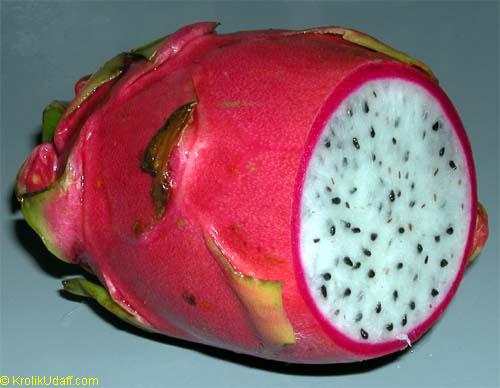 This climbing cactus is one of the most beautiful and wide spread members of the Cactaceae family. It is a highly prized, vining, fruit bearing cactus is terrestrial/epiphytic plant which is extremely unusual. It's fleshy stems reach up to 30ft. long, climbing onto walls or over trees using aerial roots. Magnificent flowers, stunningly beautiful fruit with an intense color, curious shape, and a delicious taste.

The night blooming white flowers can be up to 14 inches in length. Flowers are vibrant and beautiful and many related species are propagated as ornamentals. They generally bloom only at night, and usually last just one night where pollination is necessary to set fruit.

The fruit is most often eaten chilled and cut in half so the flesh may be spooned out. The juice is used in frozen drinks and it is in a new Tropicana Twister flavor. It is a must have for any collector or gardener with the flair for the unusual. The plants aren't usually too picky as to soil type, but because of their epiphytic nature, it is recommended to grow them in soil that is supplemented with high amounts of organic material. It can be grown successfully in sandy soils, providing shade is sometimes recommended in hot climates. In full production, these plants can have up to 4-6 fruiting cycles per year. Season: May-September.

The dragon fruit flesh can be white, red, or magenta. The red fleshed varieties contain lycopene which is a natural antioxidant known to fight cancer, heart disease, and lower blood pressure. Despite the health benefits and its spectacular appearance, the fruit has gone virtually unnoticed for centuries.

According to the legend the fruit was created thousands of years ago by fire breathing dragons. During a battle when the dragon would breathe fire the last thing to come out would be the fruit. After the dragon is slain the fruit is collected and presented to the Emperor as a coveted treasure and indication of victory. The soldiers would then butcher the dragon and eat the flesh. It was believed that those who feasted on the flesh would be endowed with the strength and ferocity of the dragon and that they too would be coveted by the Emperor. It is written that the dragons flame originates deep within its body near the base of its tail. The meat from this part of the dragon was the most desirable and most sought after portion. Only the officers of each division would be privy to this cut of meat. The ancient Chinese called this cut the jaina, which translates literally to the sweetest and best tasting. The jaina was treasured by all who were privileged enough to taste it, and it is believed that man's thirst for the jaina is what led to the destruction and eventual extinction of all of the dragons.

The mild and juicy fruit is easily cut in half and eaten with a spoon.

Today it is the leading fruit export of Vietnam. It has even caught the attention of Snapple, Tropicana, and Sobe which are just a few of the major labels that have incorporated dragon fruit into their bottled fruit drinks.