Punica granatum - the Drops of Blood from Garden of Eden 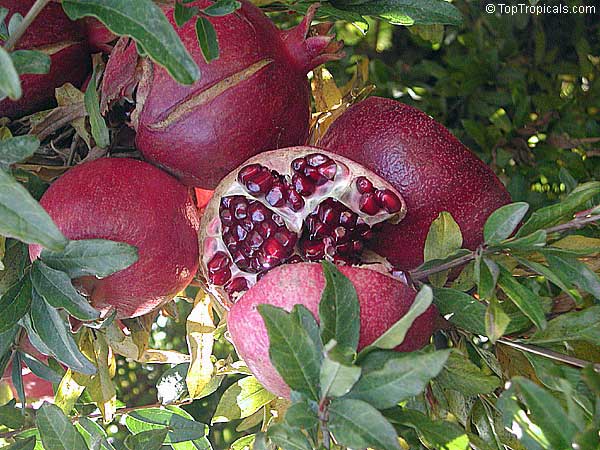 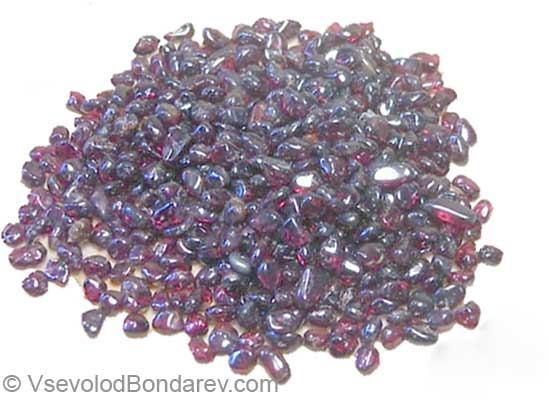 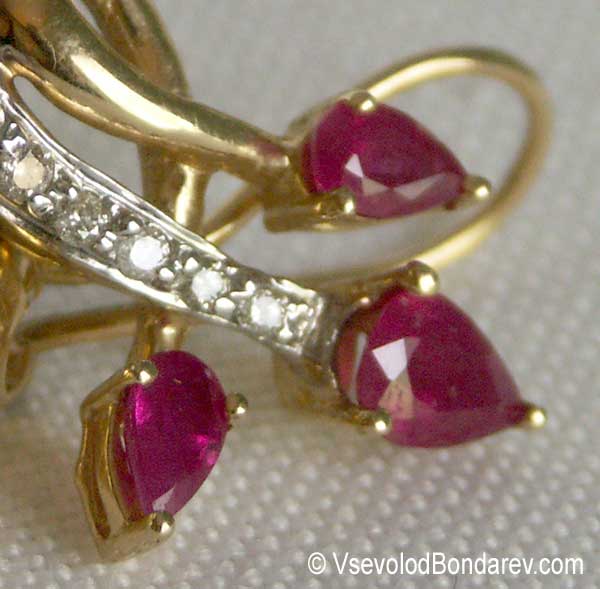 As old as the World

This famous fruit had been always considered to be among the most valuable of ornamental and medicinal plants. It is native from Iran to the Himalayas in northern India and was cultivated and naturalized over the whole Mediterranean region since ancient times. Theophrastus provided its early description about 300 years before the Christian era. According to Asian legend, the pomegranate was the 'tree of life' in the Garden of Eden, and from this belief it became the symbol of hope and eternal life in early Christian arts. The many seeds of Pomegranate are supposed to be a symbol of fertility. The erect calyx-lobes of the fruit were the inspiration for Solomon's crown and for all future crowns... Pomegranate was cultivated by the ancient Egyptians. Dried fruits have been found in Bronze Age tombs. Moses had to assure the Israelites that they would still have pomegranates when they reached the Promised Land. The pomegranate's irresistible appeal and legendary medicinal properties have been the subject of myths, epics and works of art, from Raphael and Cezanne to Homer and Shakespeare. Some scholars now suggest that it was a pomegranate - not an apple - depicted in the biblical Garden of Eden.

The fruit was used in many ways as it is today and was featured in Egyptian mythology and art, praised in the Old Testament of the Bible and in the Babylonian Talmud, and it was carried by desert caravans for the sake of its thirst-quenching juice. The pomegranate and its color have been the object of great fascination, particularly in Oriental cultures. The Arabs were great admirers and promoters of its cultivation, making it the symbol of the Moslem Kingdom of Granada in the southern Iberian Peninsula. King Solomon compared the cheeks of his beloved to the pomegranate three thousand years ago.

Pomegranate trees grow naturally in Arabia, Persia, Bengal, China, and Japan. They were introduced into California by Spanish settlers in 1769, adapted to the Deep South and Southwest of the US, and have escaped cultivation in the Gulf Coast states. Mexicans take especial pride in the pomegranates of Tehuacan, Puebla.

The valuable gem Garnet is called "Granat" in Slavic languages, named after the legendary fruit. The natural stone looks very similar to the Pomegranate (Granada) "pits". This gem is believed to bring good luck in love and friendship. 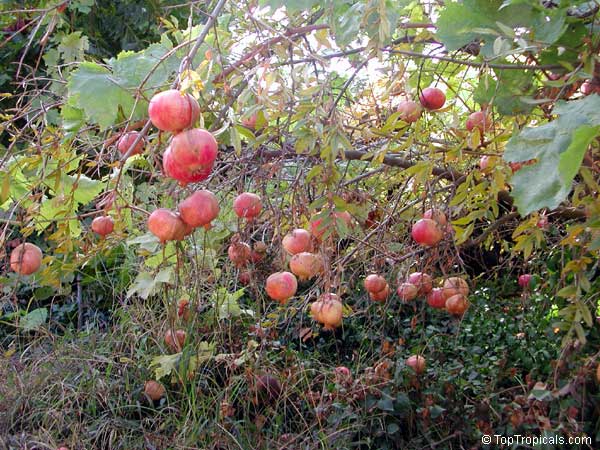 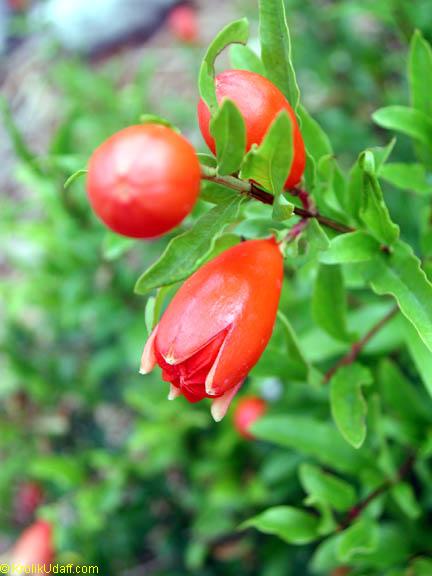 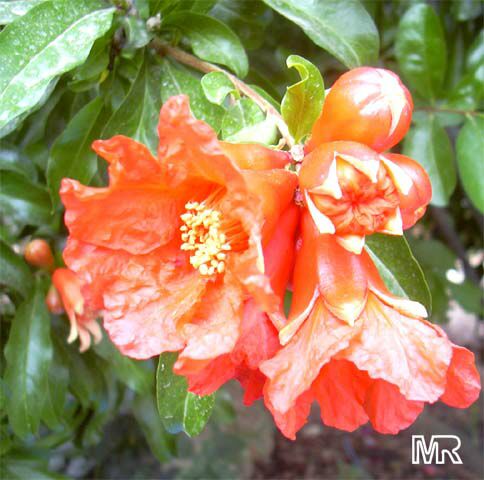 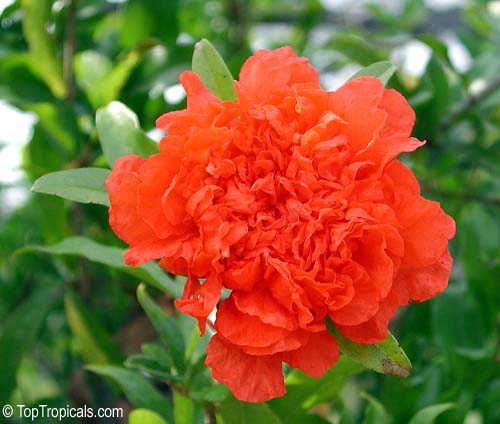 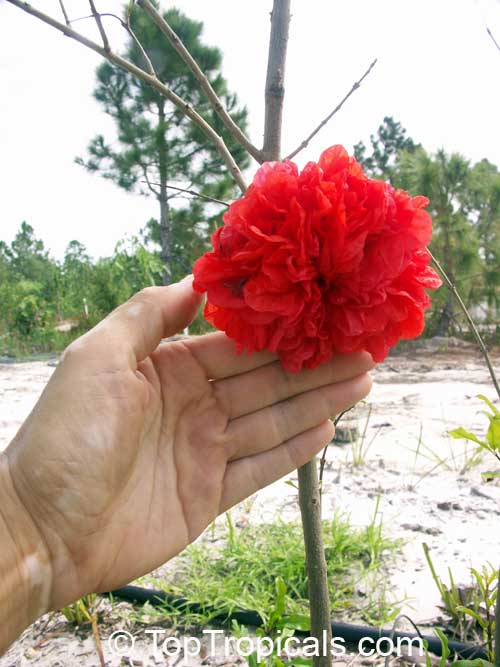 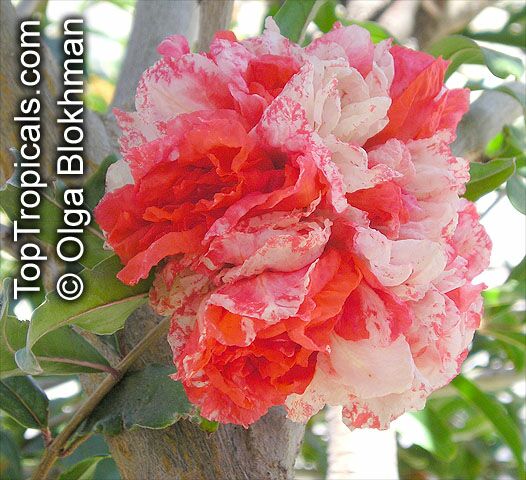 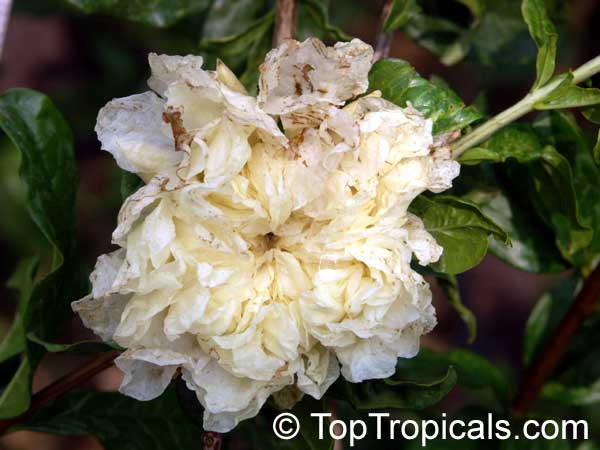 Pomegranate is a neat, rounded shrub or small tree that can grow to 20 ft., but more typically to 10-12 ft. in height. Dwarf varieties are also known. It is deciduous in cooler areas, but may stay evergreen in mild climates. The branches are stiff, angular and often spiny. Leaves are narrow, lance-shaped, glossy, leathery. There is a strong tendency to sucker from the base.

The blossoms of the pomegranate appear as dazzling flames against the dark green backdrop of the tree's leaves. They are very attractive and can be scarlet, white or variegated, over an inch across (sometimes 2-3"). The flowers may be solitary or grouped in twos and threes at the ends of the branches. The pomegranate is self-pollinated as well as cross-pollinated by insects. Cross-pollination increases the fruit set.

The nearly round, 3-5" wide fruit is crowned at the base by the prominent calyx. The tough, leathery skin or rind is typically yellow overlaid with light or deep pink or rich red. The interior is separated by membranous walls and white, spongy, bitter tissue into compartments packed with sacs filled with sweetly acid, juicy, red, pink or whitish pulp or aril. In each sac there is one angular, soft or hard seed. High temperatures are essential during the fruiting period to get the best flavor. The pomegranate may begin to bear in 1 year after planting out. Under suitable conditions the fruit should mature 5 to 7 months after bloom. Mature, properly pruned, trees can produce more than 300 lbs (136 kg) of fruit per year. The fruits must be picked before over maturity when they tend to crack open, particularly when rained on. The fruits are ripe when they have developed a distinctive color and make a metallic sound when tapped. Harvest pomegranate fruits before they are fully mature (before they split) and store in a refrigerator to ripen. The fruit continues to ripen in cold storage, and the flavor only improves.

Pomegranates are very long-lived. There are specimens in Europe that are known to be over 200 years old!

The fruit can be eaten out of hand by deeply scoring several times vertically and then breaking it apart. You'll have to decide for yourself whether to suck the pulp from the seeds and then spit them out, or eat the seeds along with the pulp. Pomegranate fruits are most often consumed as juice. The juice can be used in a variety of of ways: as a fresh juice, to make jellies, sorbets or cold or hot sauces as well as to flavor cakes, baked apples, etc.

Pomegranates have many culinary uses in the Middle East and Asia. Before the tomato arrived to the Middle East, grenadine was widely used in many Persian foods; it can still be found in traditional recipes. The juice is used also in traditional Caucasian, and Indian cooking. Grenadine is a concentrated pomegranate syrup used to flavor drinks. The juice can also be made into a wine. Pomegranate seeds are sometimes used as a spice.

The pomegranate is equal to the apple in having a long storage life and can be kept for a period of 7 months at cool temperature without shrinking or spoiling. One of the best varieties is 'Wonderful', which, if picked and aged at room temperature for a month or two, will develop the rich, sweet taste characteristic of better-quality fruit varieties.

The tiny beads of fruit, full of precious oil and juice, are brilliant as drops of blood or rubies. These "drops of blood" from the pomegranate when consumed will help to build healthy red blood cells, according to the ancients who wrote the "Law of Similars".

Pomegranates have been consumed by man since before recorded history. There is a saying in Hindi - "Ek anaar sau bemaar" - meaning one pomegranate can serve one hundred sick people. From antient times, the fruit was valued for its medicinal properties. According to Ayurveda obese persons should consume the pomegranate fruit as it will improve metabolism and assist in the weight loosening.

Pomegranate juice has been scientifically shown to help the body, as it is rich in antioxidants, the molecules that protect the body from heart disease, premature aging, Alzheimer's disease, and cancer. It is a good antioxidant, greatly improves blood quality, enriches blood (red blood cells count), contains lots of iron, and and increases haemoglobin. Pomegranate juice is excellently assimilated, excites appetite, regulates stomach activity; it has diuretic, cholagogue, antiphlogistic, antiseptic effects, and has a substance called a sterol that blocks the absorbtion of cholesterol.

Amongst its many uses Pomegranate juice is suppose to be good for heart patients and improves blood circulation. Because of its rich content of flavonoids and antioxidant, which halt the processes of arterial aging, the pomegranate seed oil is recommended in cases of reduced arterial blood flow. It is very beneficial in heart attack prevention and cardiac health in general. Because pomegranates are rich in potassium, they are appropriate for those suffering from hypertension. They help avoid excessive numbers of both systolic and diastolic pressure.

Pomegranates are of value in cases of gout, excess uric acid, and acid causing obesity because of its alkalizing and depurant effect. Pomegranates are loaded with Omega 5 CLA oils which have been found to neutralize acids associated with arteriosclerosis, breast cancer, prostate cancer and especially obesity.

The juice can also be used as an antiseptic when applied to cuts. Because of their tannin content, extracts of the bark, leaves, immature fruit and fruit rind have been given as astringents to halt diarrhea and dysentery and hemorrhages. In Mexico, a decoction of the flowers is gargled to relieve oral and throat inflammation.

All parts of the tree have been utilized as sources of tannin for curing leather.

More than just a fruit tree

Originally grown for their fruit, pomegranates are also known for the beautiful flowers that can occur for several months in the spring and early summer. Double-flowering variety "Noshi Shibari" has large carnation-like 2-3" blossoms. This variety normally doesn't set fruit, but is valued as a showy ornamental. Growing as dense shrubs, pomegranates are also useful for large hedges.

Use the dwarf variety 'Nana' for edging or in patio planters. It is often used for bonsai.

Pomegranates are hardy to as low as 15F and can be grown outside as far north as southern Utah and Washington, D.C. (although seldom set fruit in cold areas). They prefer a semi-arid mild-temperate to subtropical climate and are naturally adapted to regions with cool winters and hot summers. The tree adapts well to container culture and may fruit in a greenhouse.

The pomegranate does best in well-drained ordinary soil, but also thrives on alkaline or acidic loam as well as rock strewn gravel, will even tolerate heavy clay as long as there is sufficient drainage. Once established, the plants can take considerable drought, but fruit often splits after rainy spells following extended dryness. For good fruit production trees must be irrigated. They are tolerant of moderately saline water and soil conditions.

Since the fruits are borne only at the tips of new growth, it is recommended that for the first 3 years the branches are trimmed annually to encourage the maximum number of new shoots on all sides, and achieve a strong well framed plant. After the 3rd year, only suckers and dead branches are removed. Pomegranates are relatively free of most pests and diseases.

Although easy to grow from seeds, pomegranate seedlings cannot be expected to resemble their parents.

Pomegranates should be placed in the sunniest, warmest part of the yard or orchard for the best fruit, although they will grow and flower in part shade. The attractive foliage, flowers and fruits of the pomegranate, as well as its smallish size make it a excellent landscaping plant.

Picture of the actual plant for sale,
plants are in 3 gal containers,
3-4 ft tall, very nice, full and bushy.
(all 3 Pomegranate varieties above look this nice)
Picture taken April 2008: 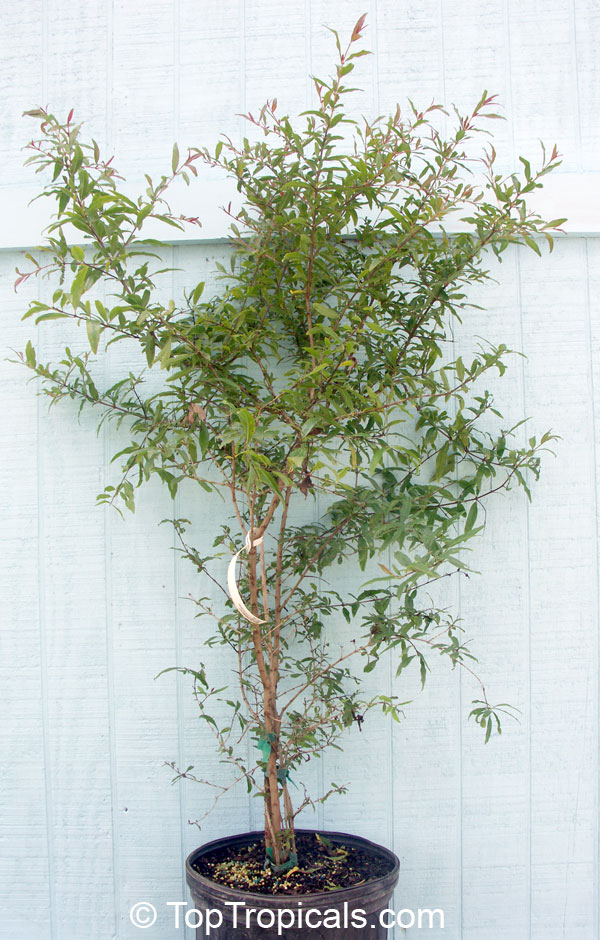 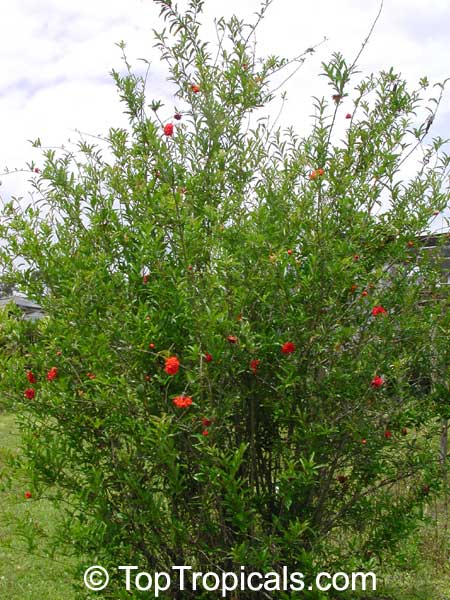 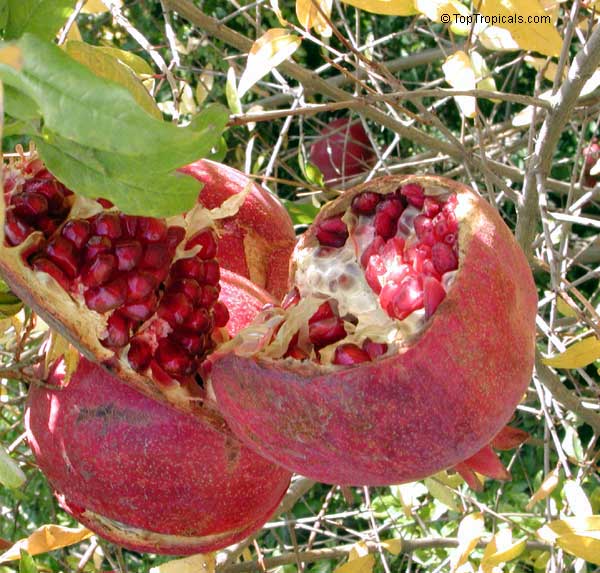 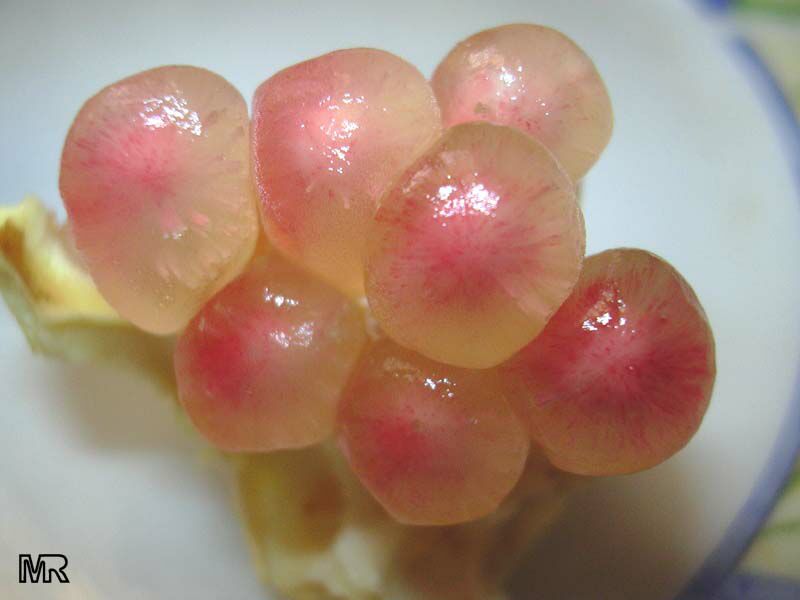 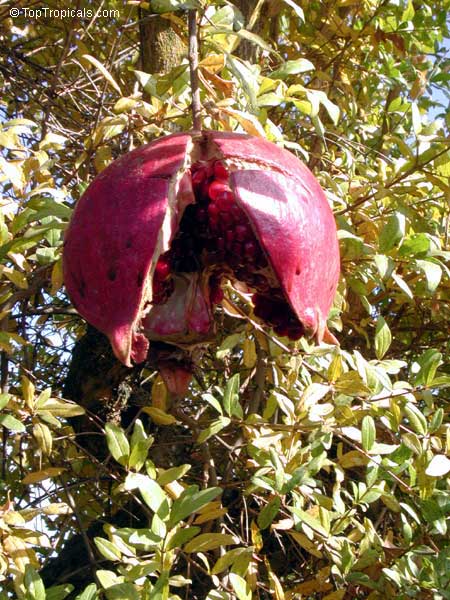 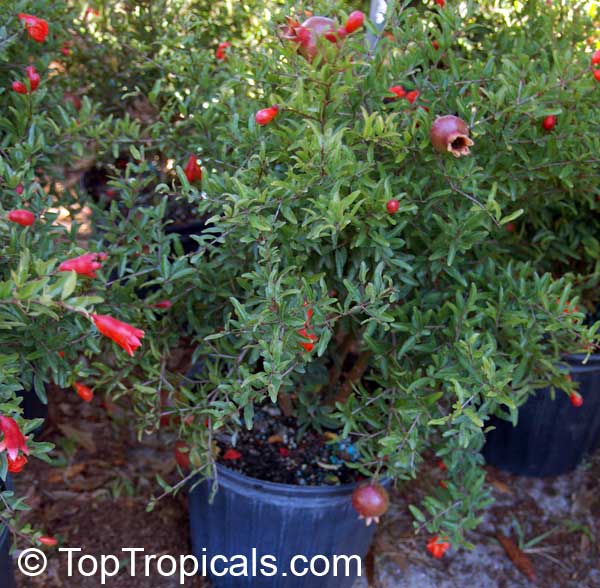 Dwarf "Nana" in a pot 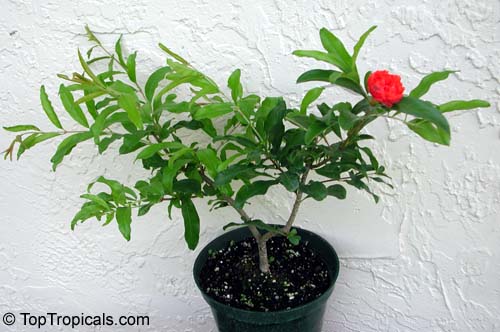