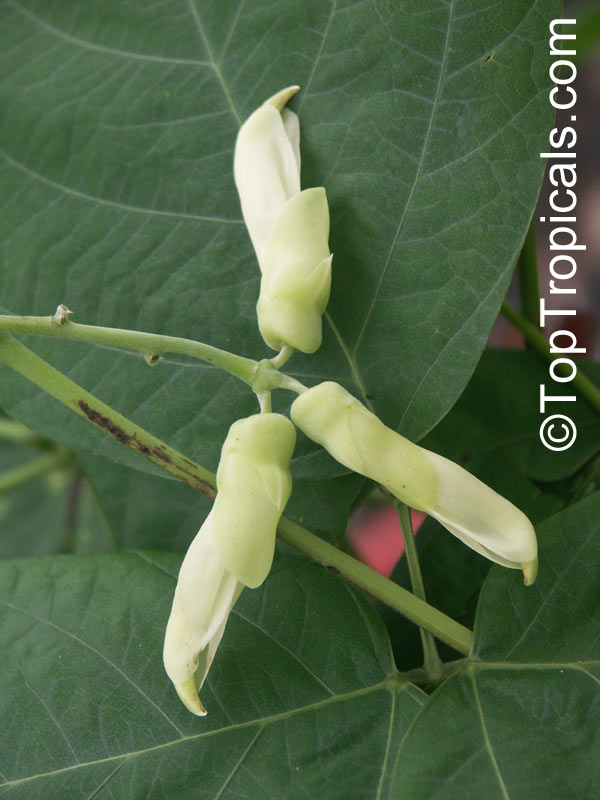 Seabean vines grow at lower elevations, usually near the coast. The seeds can be carried great distances by the ocean currents and still remain viable.The flowers are in pendent, round-topped, umbel-like clusters. The individual flowers are pea-like with a bent, upcurved keel. The flowers are followed by oblong, flattened, winged, green drying to dark brown bean pods lightly covered in stinging, orange-brown hairs known as trichomes. The seeds resemble hamburgers due to their disk shape and indented, black hilum (seed scar) and are almost 1 inch wide and brown, mottled brown and black, or solid black in color. The leaves are trifoliolate with 3 green, hairless or mostly hairless, broadly elliptic to egg-shaped leaflets. The stems are slender and twining. The vines typically hang down from the trees in green, leafy curtains.

The hard, woody seeds are polished and made into attractive necklaces and leis.

The seeds are poisonous and contain L-DOPA and other potentially toxic substances. 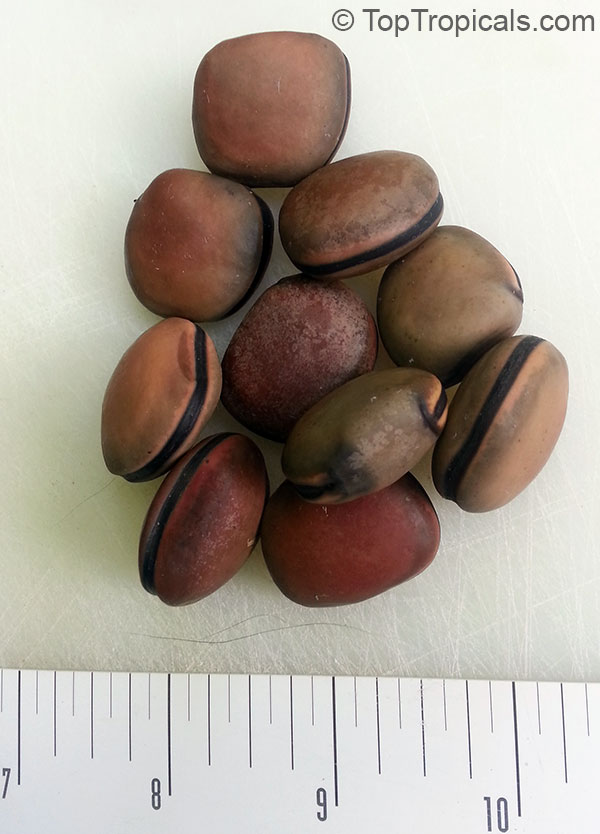 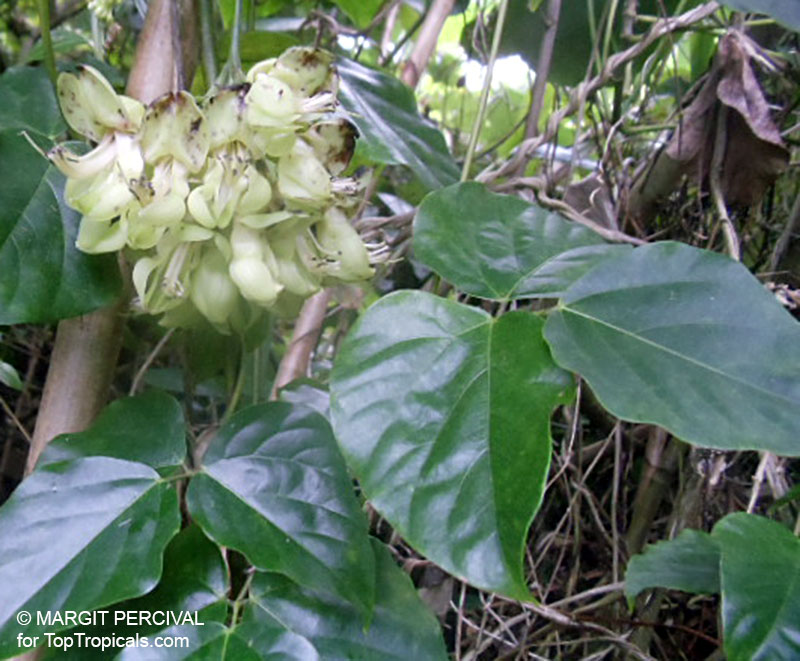 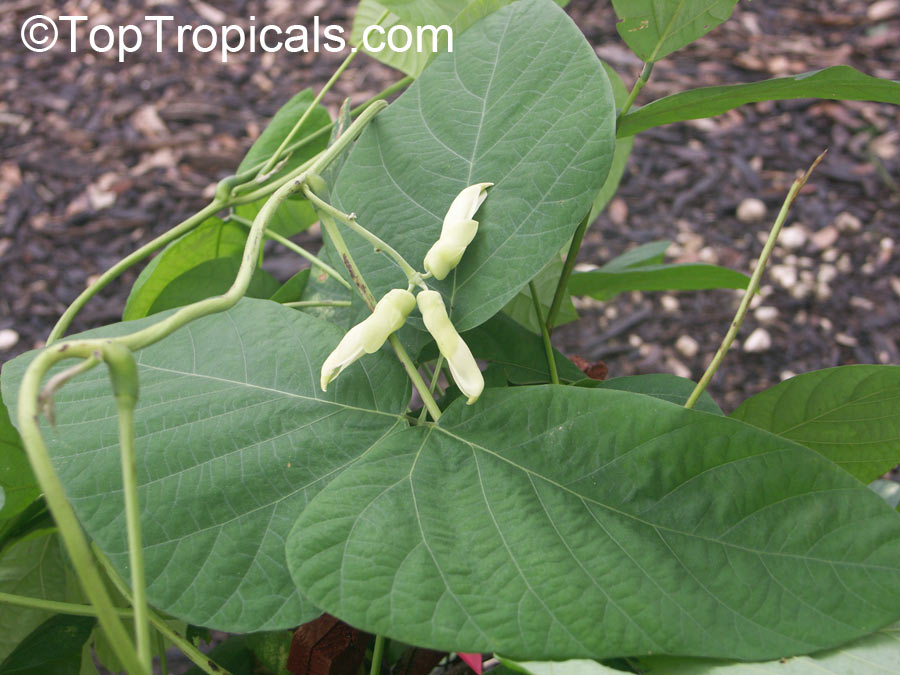 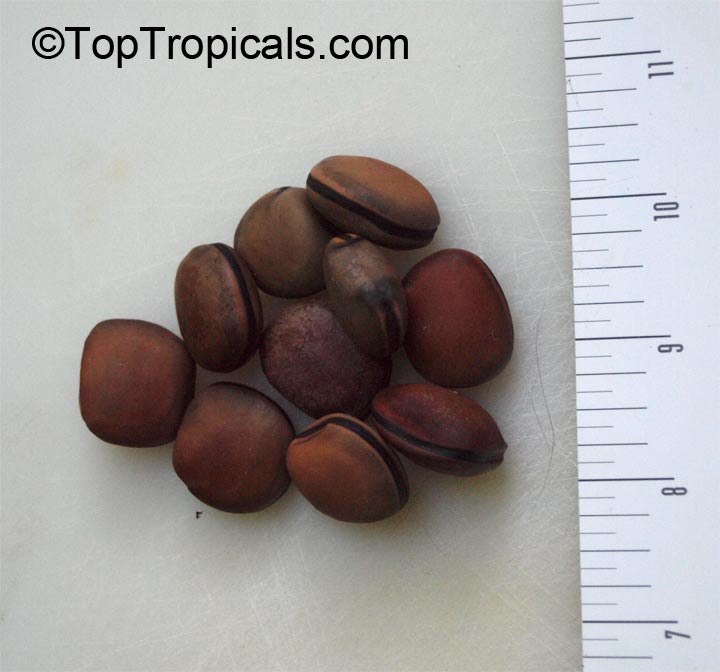 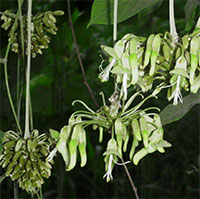 6188 Mucuna holtonii - seeds
Chandelier vine. Mucuna holtonii is a very interesting rare species of Jade vine, pollinated by bats when a triangular flower petal reflects precise sound wave signals to guide the bats to the nectar. Bats are able to detect if the flowers have nectar using echolocation. After an initial bat visit during which nectar is removed, the petals are arranged in a different manner!
It is a beautiful and robust woody vine native to Central America, and the northern part of South America. The 'chandelier' cluster of two-inch-long, whitish-green flowers hang on very long peduncles.
The seeds are very large, round, and flat and have a high concentration of L-dopa (a toxic amino acid). They are extremely buoyant and well adapted for ocean dispersal, traveling from continent to continent. The thick hard coating gives them many years of viability.
Ordering seeds info