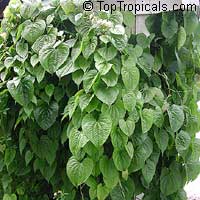 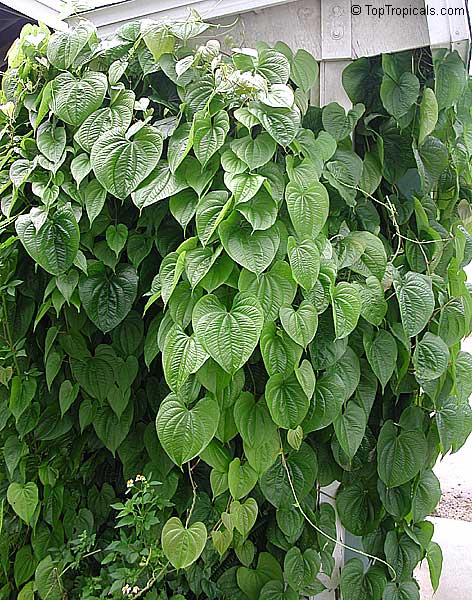 A perennial twining vine with edible roots. It has slender stems up to 6-15ft long that die out every autumn. Underground tubers, large, elongated, called, in its country of origin, sweet potatoes. Leaves dark green, lustrous, cordate, 7 to 9-veined are green or reddish-purple colored along the leaf margins, petioles, and stems. Flowers are small, white and have a cinnamon fragrance. In autumn small brown tasty, with a nut flavor edible bulbils appear in the axils of leaves. The lower part of the plant is very often devoid of leaves. Best grown in a warm sunny position. It's not fully hardy, hence before winter it's advisable to cover an area of about 40" in diameter around the plant with e.g. bark mulch thus creating an isolation layer that will help protect the roots. Thrives best in well-drained organic soil, rich in humus, and kept moist but not wet. An amateur plant, easy in propagation. Excellent for small fences, trellises and other garden supports. Widely cultivated in Asia for food, grown primarily as an ornamental in the US. Has proven to be root hardy to USDA Zone 5, persisting for years. Uses: The Chinese yam is a sweet soothing herb that stimulates the stomach and spleen and has a tonic effect on the lungs and kidneys. The tuber contains allantoin, a cell-proliferant that speeds the healing process. The tuber is also anthelmintic and digestive. It is used internally in the treatment of poor appetite, chronic diarrhoea, asthma, dry coughs, frequent or uncontrollable urination, diabetes and emotional instability. It is applied externally to ulcers, boils and abcesses. The tubers are harvested in the autumn and can be used raw or baked. The leaf juice is used to treat snakebites and scorpion stings. The roots of most, if not all, members of this genus, contains diosgenin. This is widely used in modern medicine in order to manufacture progesterone and other steroid drugs. These are used as contraceptives and in the treatment of various disorders of the genitary organs as well as in a host of other diseases such as asthma and arthritis. An easily grown plant, succeeding in a fertile well-drained soil in a sunny position or light shade, though it is best in full sun. Plants are hardy to at least -18c. Plants produce tubercles (small tubers that are formed in the leaf axils of the stems), and can be propagated by this means.

Uncultivated forms, such as those found growing wild in Florida, can be poisonous. 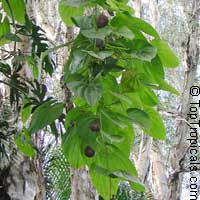 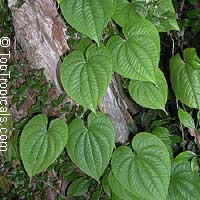 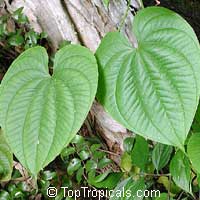 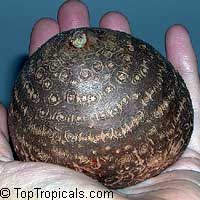 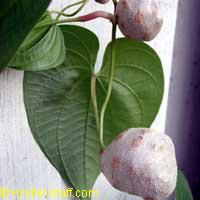 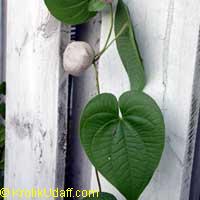 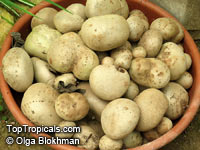