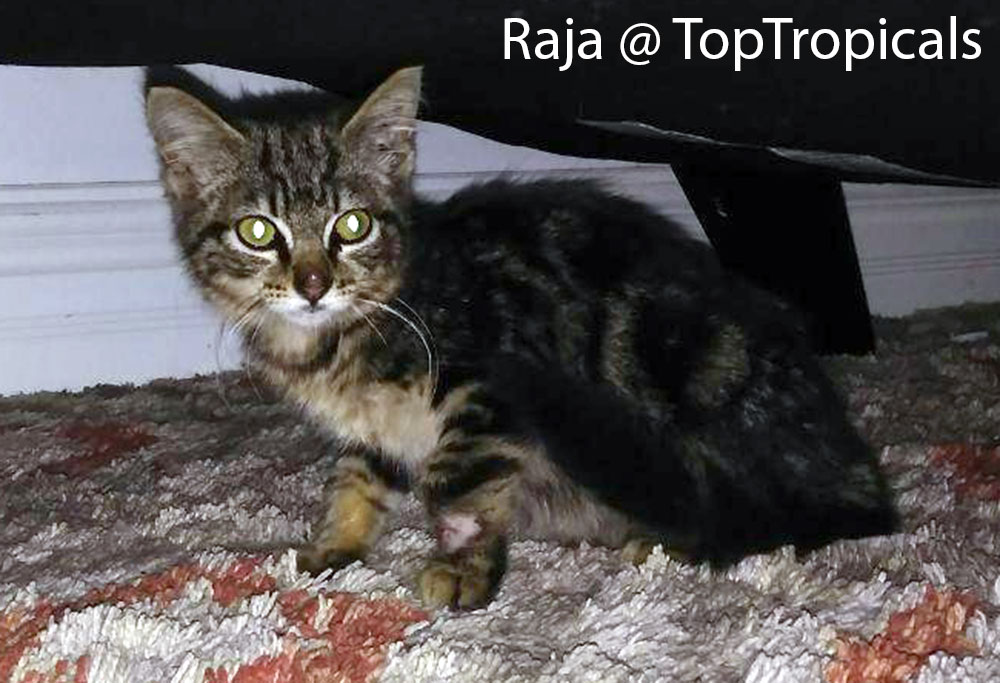 In our last newsletter we told you about little Abu, a Baby-Purrrson that Kristi rescued from the woods where he had been surviving along with other feral cats: his little sister and his Mom who was badly injured in a car accident. We received messages from our customers asking if we were able to rescue the other two cats...
For the past few days Kristi, Jamie and Onika have been trying to capture them... The feral cats didn't want to come to humans, they were hiding away. The ladies were able to trap Abu with a tuna can... then tried and tried again with the other two with no luck... Even tried to call Animal control asking for help catching the animals so we could give them medical help. We were told that they don't trap cats! ("unless it's a cat-hating neighbor going against a crazy cat lady" - Crazy Cat Lady's comment). The girls continued their efforts again and again, with treats, traps and different capture plans... day after day.
Unfortunately, the sick mother-cat did not survive and we found her yesterday with her little baby crying over her cold body.
Kristi was able to grab the tiny kitten who was even smaller than her brother Abu. She named her Raja - a friend of Abu. Raja said that her poor mother's words were: "Go to that lady, my baby, she looks kind. It's my time to go now, and you will be in good hands..."
The little Raja was in very poor shape herself, with eyes full of tears. She was covered by fleas, and looked like passing out from anemia. Her paw was injured and infected, and her little nose... first we just thought she was pig-nosed! But her nose is also swollen. Kristi rushed her to the vet where Raja got treatments and meds. She got much better the same day and finally stopped crying. Raja finally recognized her brother Abu and cuddled with him.
Now Raja is on her way to recovery and will be sending her updates soon!

Thank you everybody for supporting us in helping PeopleCats. Every dollar you spend on TopTropicals plants is split between plant growers and PeopleCats who help us become better people.

Check out the Video: Meet PeopleCats of TopTropicals and more Cat of the Day stories.