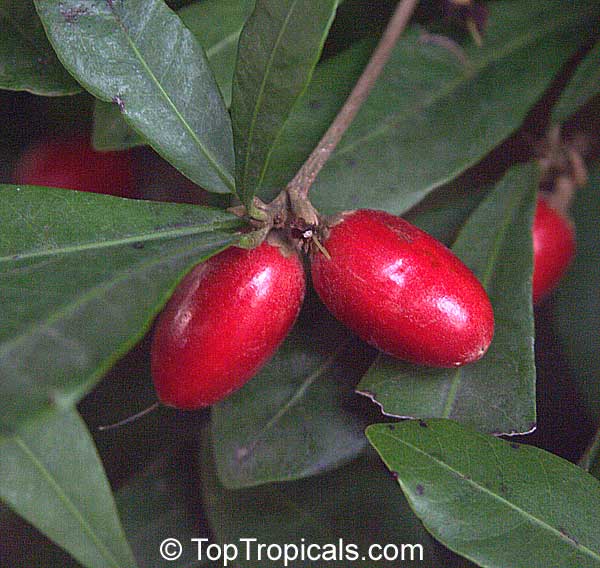 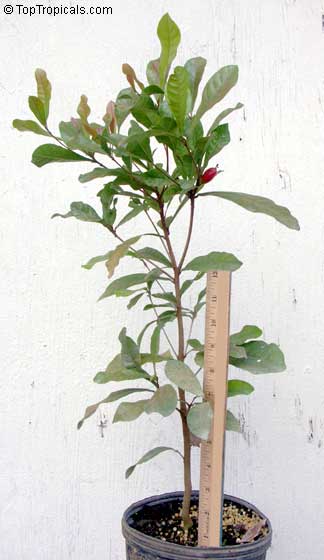 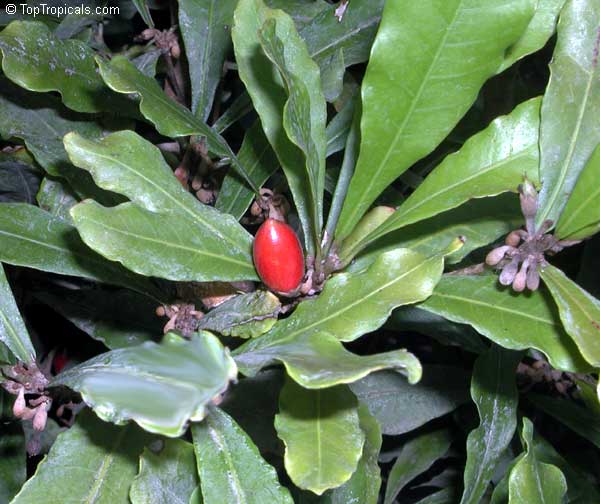 ...It is one of the strangest tropical fruits. The most unusual thing about it is the effect it has on one's taste after this miraculous berry has been consumed. The “miracle” is that if lemon or other sour food is eaten after the miracle fruit, the sour tastes sweet, as if sugar has been added. That kind of magical experience is unforgettable! The interest in this plant is so high that anyone who has a plant always finds eager volunteers to test its sweetening properties. A natural chemical in the fruit masks the tongue’s sour taste buds so that lemons taste like lemonade or lemon pie, or lemon candy. What causes the miracle? The fruit has a unique taste changing glycoprotein that inhibits tastebuds' perception of sour taste. The sweet sensation lasts for half an hour to a few hours...

A BIT OF HISTORY

The plant was discovered in West Africa, where the native diet revolved around a few basic foods, mostly of sour taste. Just imagine the delight of the people when someone ate a few red berries and later ate a meal of sour foods, to find everything suddenly sweet! The West African natives use the fruit to sweeten sour palm wine (beer) - Pito, and fermented maize bread - Kenkey.

This West African wonder was not botanically identified and named until the middle of the 19th century as Synsepalum dulcificum, a member of the Sapotaceae family, relative of the sapodilla (Manilkara zapota).

Bill Whitman was the first to grow the plant successfully in the US. He had a seedling all of 7" tall and a cutting of 4" bearing fruit upon the young twigs.

This small, evergreen shrub grows very slowly to a height of 4-6 ft in container, and 10-15 ft in natural habitat. Eventual size depends on where the plant is grown; a 10 years old plant might be easily only 4-5 feet tall. It forms an oval to pyramidal shaped bush or small tree.

Inconspicuous brown-and-white 1/2 inch flowers are followed by bright scarlet, 1 inch footbal-shaped fruit, sweet and pleasant tasting. Most of the fruit is taken up by a single large seed, but the pulp around it can be nibbled off and then for the next hour or so, anything one eats that is sour has a sweet flavor. The plant starts fruiting when only 1 ft tall. It produces fruit practically year around. In native habitat, two large crops are available yearly, each after a rainy season. The mature bushes usually have a few fruits hanging around all year. Seed to fruit in 2 to 3 years. Flower to fruit in 30 to 45 days.

One of the many virtues of miracle fruit is its ease of cultivation, although, like with any plant, it would be nice if you learn its likes and dislikes before inviting it into your home or garden.

If planted in alkaline limestone based soils, the plant may die. These plants seem to live for acid, thriving in it, and then converting it! They must have rich, well-drained soils that are acid in pH, with lots of peat moss, and require constant supply of micronutrients. On alkaline soils they often are grown in large containers with generous amounts of peat moss for sustained success in fruiting. It makes an excellent container tree, which gives it the added benefit of mobility. Since it is so easily containerized, almost anyone can grow this plant whether they have an outside planting area or not. Miracle fruit can be a rewarding indoor plant. It is not a fast growing plant, which is another benefit for those who would like to grow it in their house or greenhouse. It thrives under warm temperatures, and high humidity. A 10 inch plant is happy in a one gallon pot. One that size will flower and fruit at least twice a year, probably more frequently. 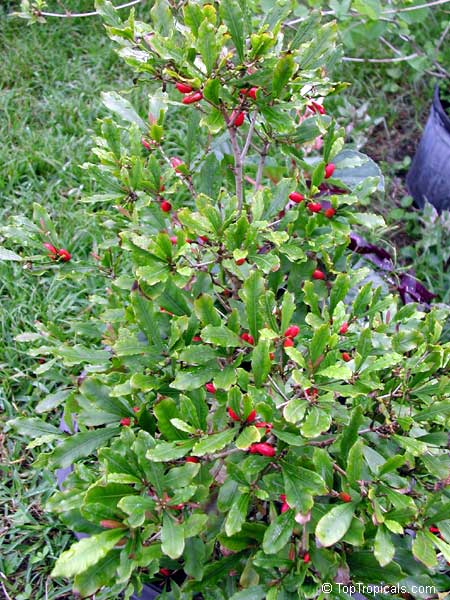 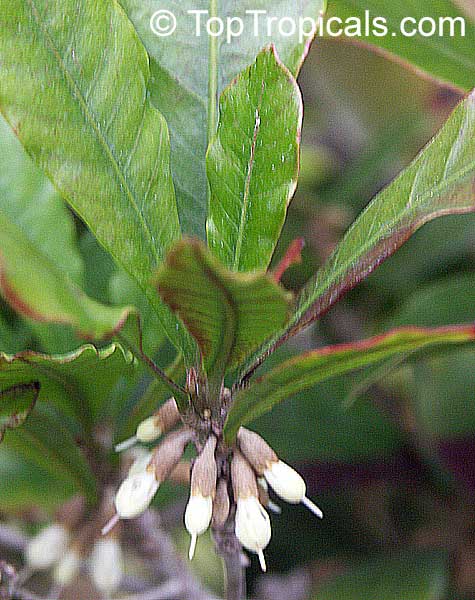 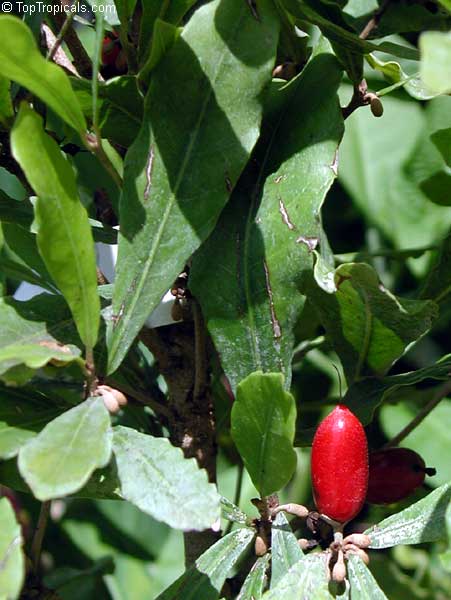 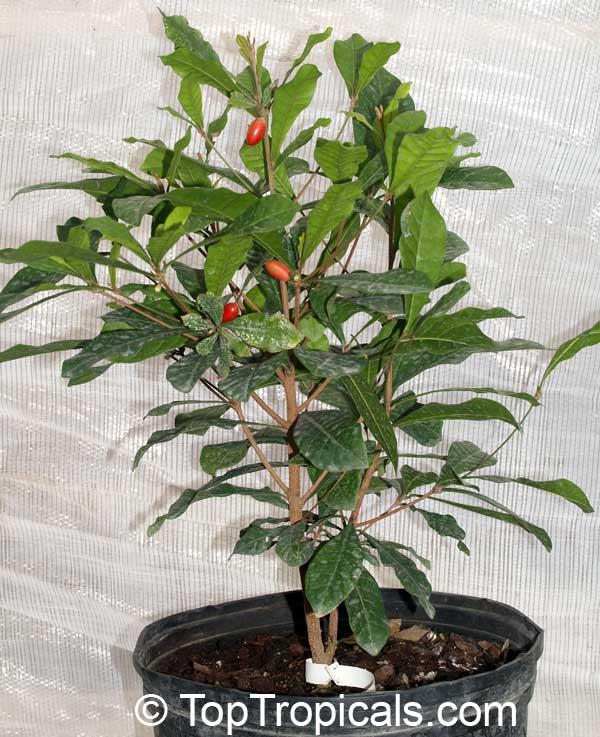 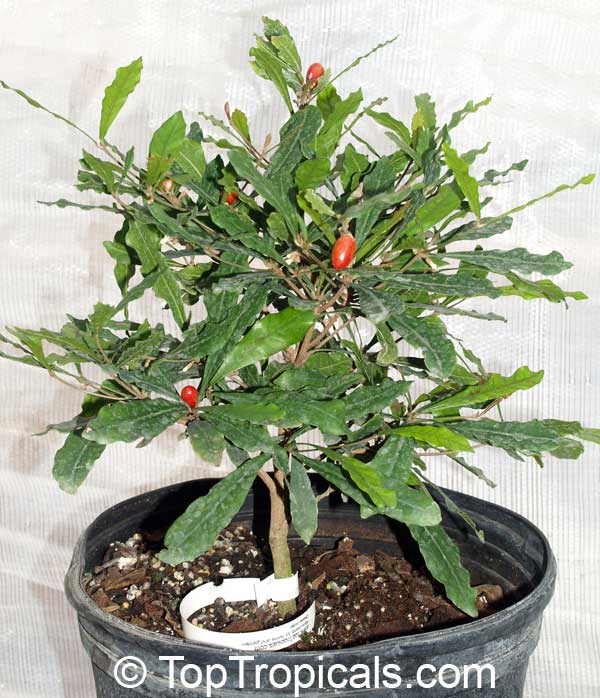 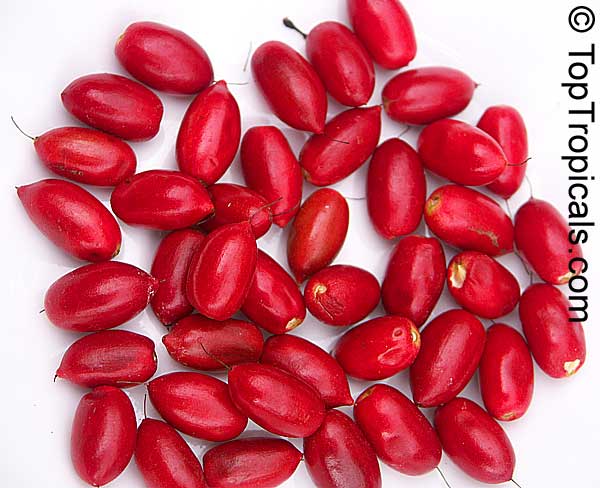 Miracle Fruit thrives best in partial shade. When plants are small they are subject to frost damage, so they should be container-grown and kept indoors or moved to protected locations when frost or freeze threatens. Older plants may sustain some leaf and minor twig damage, but may sustain cooler temperatures without being killed. Although not thought to be frost tolerant, the synsepalum plants have been observed growing in Florida in protected from wind locations as far north as Tampa.

When propagating miracle fruit, sow the seeds in a rich, well-drained medium, just barely covered, and water lightly every other day. Seeds generally come up in about eight to ten weeks, but grow slowly the first year, often being only two to three inches tall at the end of almost one year of growth. It really takes three to four years before the plants reach a height of more than fifteen to twenty inches, and then they start to grow more rapidly. However, when growing this plant from seed, be prepared to wait for a few years until you can enjoy the first fruit. If possible, it is always recommended to get a mature full specimen, at least 1 ft tall, that is ready to bloom.

There are 2 known species of synsepalum that carry miracle fruits. Synsepalum dulcificum is a smaller-leaf version (leaves are narrow), and is somewhat slower growing plant. Synsepalum subcordatum (Giant Miracle Fruit) is a larger leaf variety, and grows into a small tree. The fruit are slightly bigger than those of s. dulcificum, and are produced more profusely, especially in first years. With age, the fruit crop amounts of these two species become about the same.

THE FUN, THE TRICKS AND RECEPIES

Many people are still unaware of this rare fruit and the effect it could have on enhancing the quality of their lifestyle.

There are no artificial sweeteners proven absolutely safe. Sugar and other "natural" sweeteners are hardly to be considered as food with no ill effects. Miracle fruit is a natural, healthy and harmless sweetener! Due to its safety, it may have a great potential and practical use in everyday life and become a gift to humanity, a way to improve our diets and our health.

It is unfortunate that heat destroys the active principle, so that canning, jams, preserves, baking, drying, etc. are impossible. The fruits can be held for a short period of time by refrigeration or freezing.

The fruits themselves are of interest as a commercial source of artificial sweetener; however, large quantities of berries are needed to collect a substantial amount of the sweetener. The problem is how to increase the shelf life of the product. The berries are perishable, and once picked, last only a few days. Methods of shipment are not conducive to marketing the fruits and commercial cultivation of the plants was unsuccessful so far.

Miracle fruit is difficult plant to locate and is usually found only in a collector’s garden.

Every household could be graced with at least one miracle fruit plant! 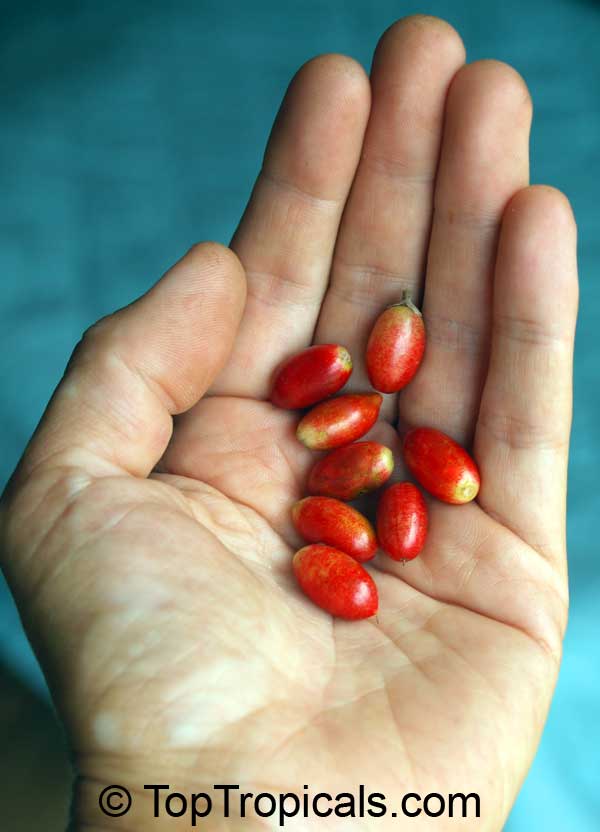 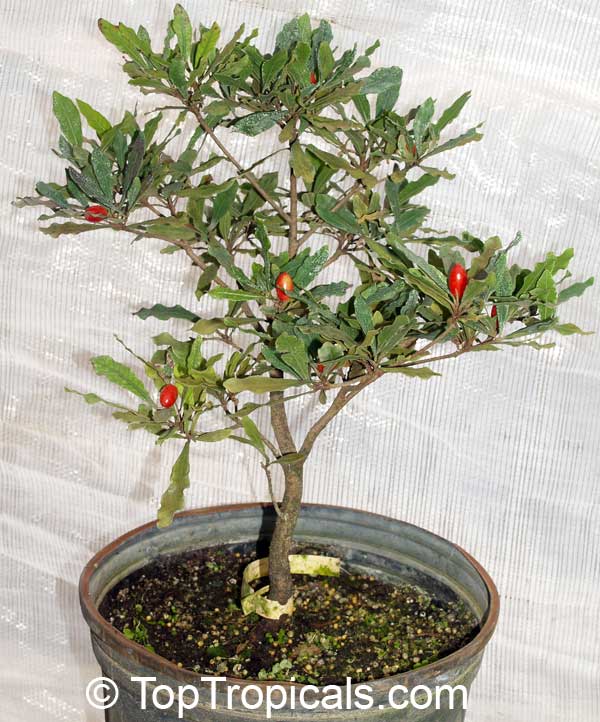 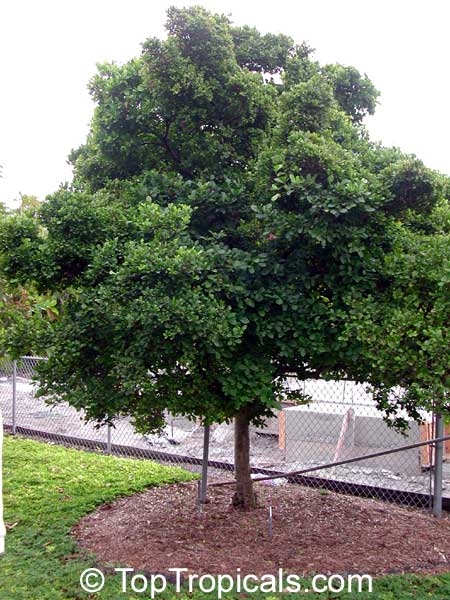 Bill Whitman's 20 ft Synsepalum subcordatum in his Bell Harbor garden in Miami is about 25 years old. He has harvested 850 fruits at one time. 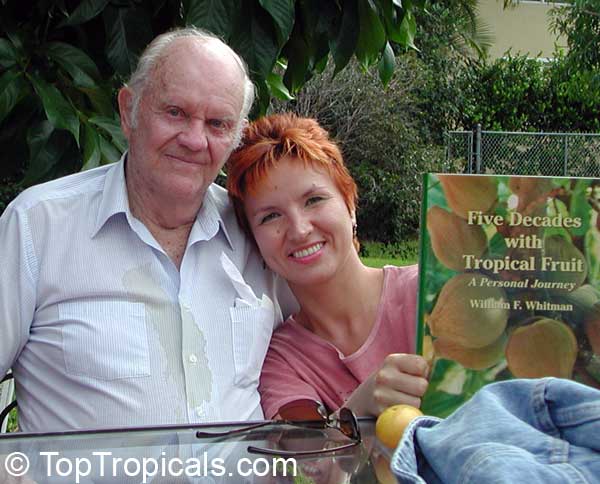