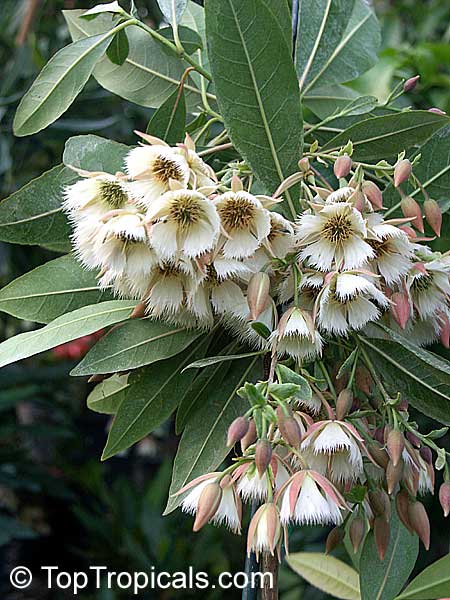 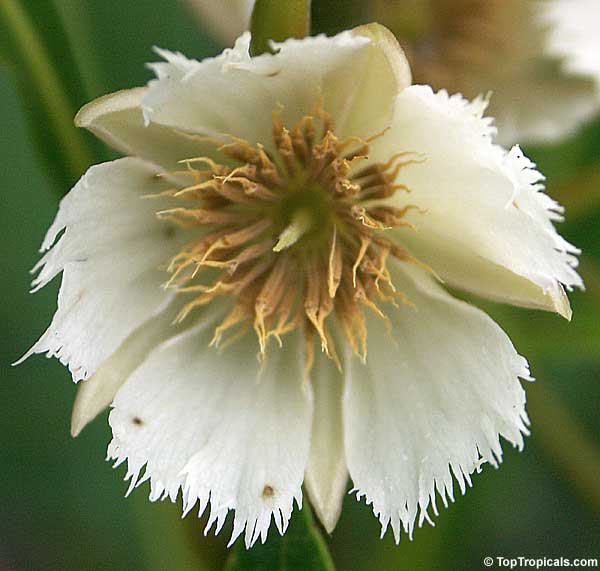 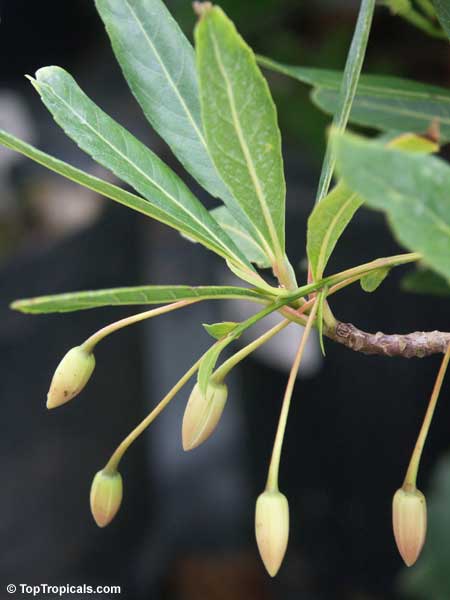 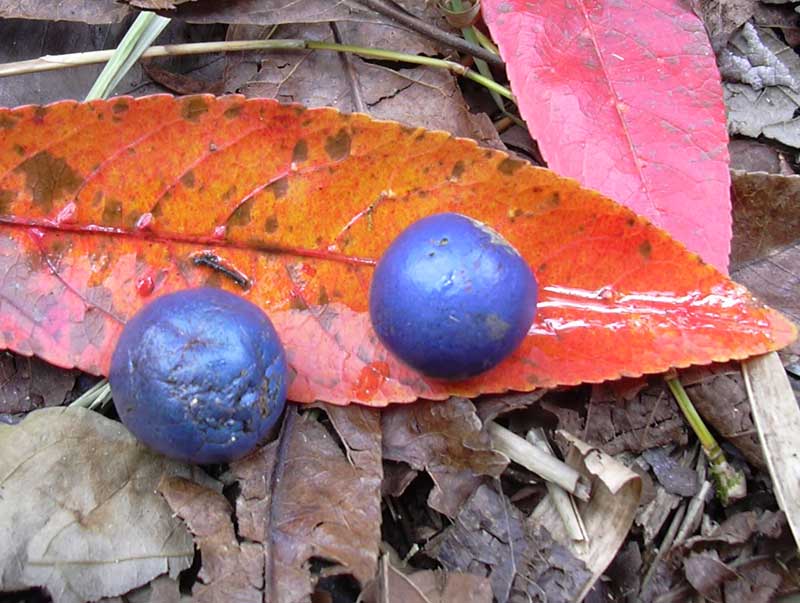 This handsome tree of the evergreen rain-forest has nicely shaped dense crown with approximately conical form. In Malaya it has been rated there as a good shade-tree. Growing into remarkably large tree in tropical rainforests, Elaeocarpus usually stays medium-sized tree (20-25 ft tall) in subtropical gardens.

Clusters of finely toothed, glossy, dark green leaves are hairy and paler beneath. Upper twigs are metallic-brown, young leaves are bronze-red, becoming dull dark green. Old leaves turn bright red to scarlet in color before falling, resulting at times in the tree bearing single limbs of bringt red foliage. The tree is normally evergreen, may shed leaves for a short period of time during cold or drought periods.

The masses of white or sometimes pinkish flowers (cultivar Prima Donna) are arranged in rows along the branchlets. They are arising from twigs at the scars of fallen leaves as curious inflorescences spirally arranged in narrow, unbranched recemes. The flowers hang downwards, reminiscent of lily-of-the-valley. Each little, bell-shaped bloom is clasped in narrow, finely pointed sepals, with its petals deeply incised to give the appearance of a shaggy fringe. Feathery petals are cup-shaped with a fringed edge, giving them the dainty appearance of small hanging skirts, hence the attractive common name of 'Fairy Petticoats'. Flowers have an unusual liquorice scent. Flowering period - Winter to Spring, sometimes to early summer.

The flowers are followed by masses of shiny, round, cobalt blue fruit. Fruit is a marble-size drupe (1" across), ovoid, with a thin layer of flesh. The flesh greenish yellow, sour and edible. The fruit ripens by summer and contains a hard rough 4-seeded stone which is elegantly tuberculed, marked with five vertical grooves. When cleaned of the flesh and polished, the stones are used in India as necklaces, bracelets and other ornaments, stained or set in gold (see Photo of beads). Hard, pitted seed coats may be used for Chinese checkers and have a religious significance in Asian countries. They are particularly important in rosaries worn by Hindu mendicants, followers of Shiva, as they afford assistance to the attainment of Heaven and Shiva’s company. Such rosaries contain 32 or 64 stones or 101 representing the number of eyes of Shiva. A close relative is Elaeocarpus ganitrus, or Rudraksha tree. The seed of Rudraksha tree has been given a very special place and it is credited with mystical and divine properties. It is said that the plant of Rudraksh is originated from the tear drops of Lord Shiva. The word Rudraksh is a Sanskrit compound consisting of the name Rudra (the name of Lord Shiva) and Aksha which means eye, tear. As per the vedic scriptures Rudraksh can nullify the effects of malefic planets to a great extent. Before the seeds are dried, they are a deep rich blue, dried they become brown and are used as prayer beads. It is said that the seed of Rudraksh contains the secrets of entire evolution of the cosmos within it. No other necklace or bead is so auspicious and powerful as Rudraksh. Rudraksh beads are generally used with Shiva mantra. However, they are effective with any mantra said with devotion, for they open the Heart Chakra. Rudraksh is believed to help Lower Blood Pressure and Create Stability within the entire system.

A century ago there was a brisk trade in the stones from Singapore and Java to India, and Chinese in Indonesia devised a system of ring-barking their cultivated trees to obtain fruit of reduced size containing seed the size the market favored.

In it is widely used in Indian medicine. Australian Aboriginals mix fresh fruit with water to make an edible paste.

Elaeocarpus is an ideal tree for the tropical garden as it needs little maintenance to thrive, surviving well in low nutrient and dry soils, except sands and waterlogged areas; it performs best when well watered. The tree grows in a range of light intensities, from heavy shade through to full sun. It is adaptable to zones 9-10 and is hardy to at least light freeze when established (as low as mid-20's). Small plants require regular watering, then as the plant matures in the ground, it becomes drought tolerant.

Elaeocarpus is a good choice for container culture. Within a few years, it will require 10-15 gal pot and can be grown as a patio or a small garden specimen.

The flowers attract many months and butterflies, while the pretty fruits attract birds like the Regent Bowerbird that collect them for their blue color. Other birds that eat these fruits are Wonga Pigeons, Crimson Rosellas, Figbirds, Currawongs, White Headed Pigeons and Olive-backed Orioles.

Picture of the actual plant for sale in February 2008,
plants are in 2-3 gal containers,
2-3 ft tall, bushy, some with buds or flowers. 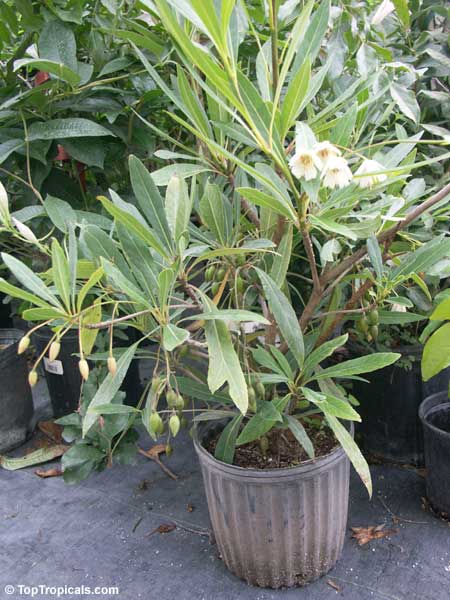 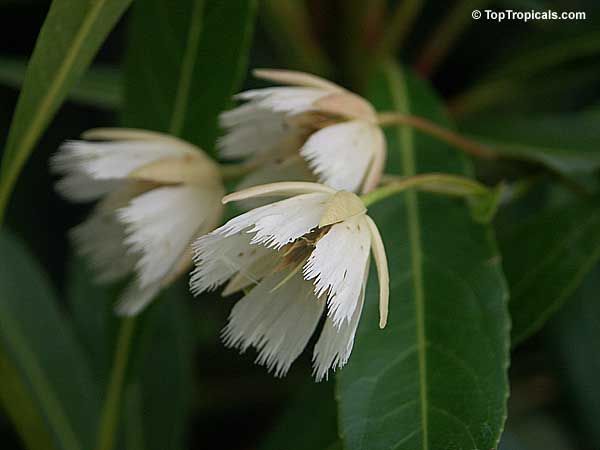 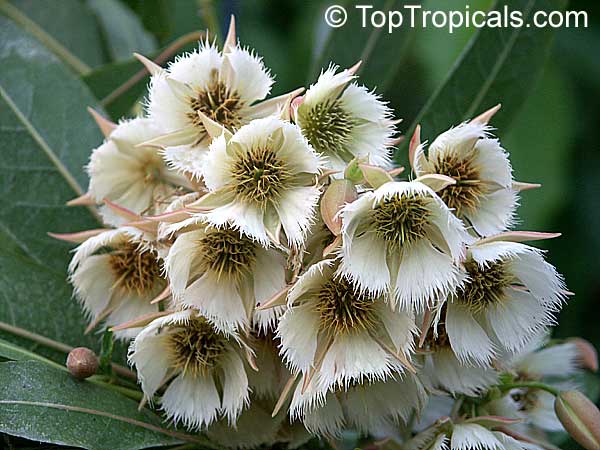 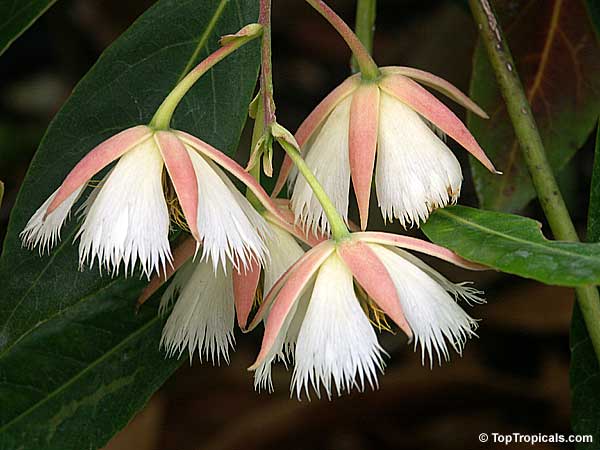 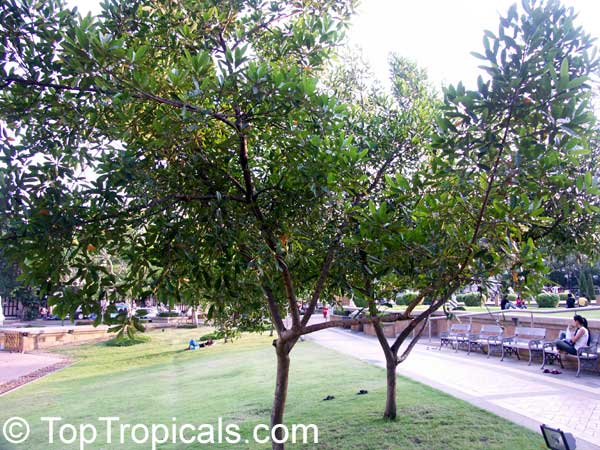 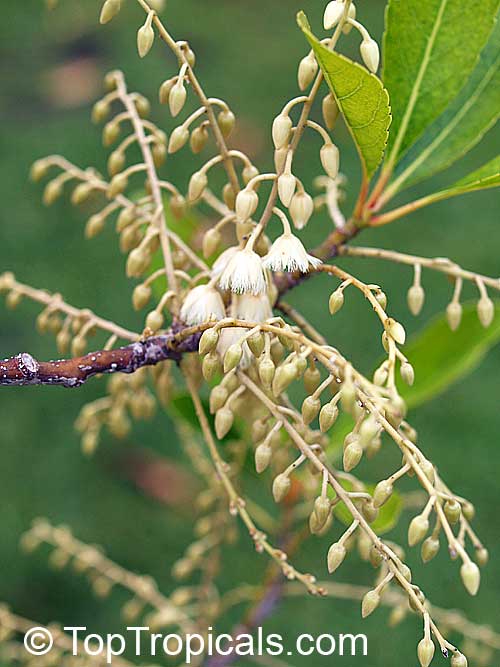