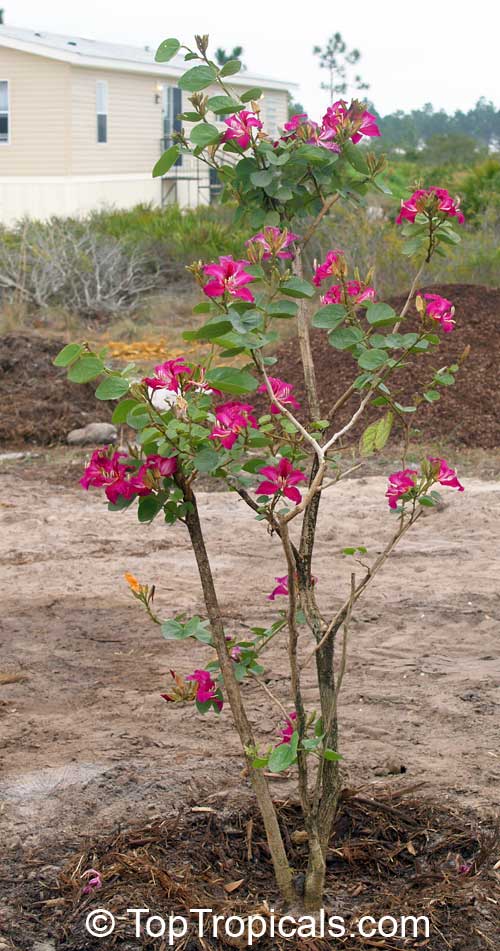 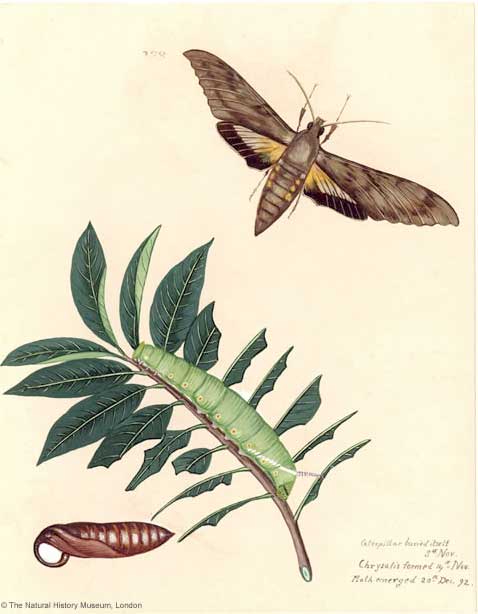 
"...Edging the golf course of the club was a glorious sweep of glowing purple. Even before I was near enough to identify the trees, the rich, heady perfume which filled the air told me they were Bauhinias. The sight left me breathless and it was then I realised how difficult was the attempt I was making to describe in mere words the trees I know better how to paint..." (D. Cowen, "Flowering trees and shrubs of India")

Certainly seeing flowering Bauhinia blakeana is one of the best things a plant collector will love about winter. It truly is the most beautiful orchid tree! No, it is not a true orchid. Bauhina blakeana is really in the pea family, not in the orchid family, but the flowers are gorgeous just the same.  With these large green heart shaped leaves and 4-6" purple flowers it brings a very tropical look to a landscape...

This plant is thought to be an accidental hybrid between B. purpurea and B. variegata. It was discovered on the seashore of Hong Kong Island in Pok Fu Lam, near the ruins of a house in 1880 by Sir Henry Blake, a British Governor of Hong Kong from 1898 to 1903 and an enthusiastic botanist.

The first scientific description of the Hong Kong orchid tree as a new species was published by S. T. Dunn, superintendent of the Botanical and Forestry Department, in 1908. He assigned it to the genus Bauhinia and named the species, blakeana, after its discoverer, Sir Henry Blake. According to another story, the plant was actually named after his wife, Lady Edith Blake. She was a talented artist, painting watercolors of plants, flowers and butteflies. She was able to combine her artistic abilities and her interest in butterflies to produce a collection of nearly 200 watercolors. At least one more plant was named after her - Quercus blakei (syn.Q. Edithae) - the new species oak with the longest acorn that she had painted. Edith Blake's life story is a fascinating tale of romance, the British Empire and above all her love of butterflies and plants. Her life was filled with travel and excitement, and little did she realise that her artwork would provide an important and lasting scientific legacy.

The genus name Bauhinia was given after the 16th century Herbalists Jan and Caspar Bauhin.

After the handing back of the colony to China, a special award was created to replace the British Imperial honors. The award is called the Grand Bauhinia Medal, or GBM for short.

A statue of the plant has been erected in Golden Bauhinia Square in Hong Kong.

This unique endemic flower is special of Hong Kong's ecosystem. Trees are widely cultivated and distributed in different areas in Hong Kong, from roadsides to local and country parks. It was introduced to Taiwan in 1967. In 1984 it was chosen to be the city flower of Chiayi City, in southwestern Taiwan.

Local people call the leaf chungmingyip ("clever leaf"), and regard it as a symbol of cleverness. They use the leaves to make bookmarks to assist them to study well. 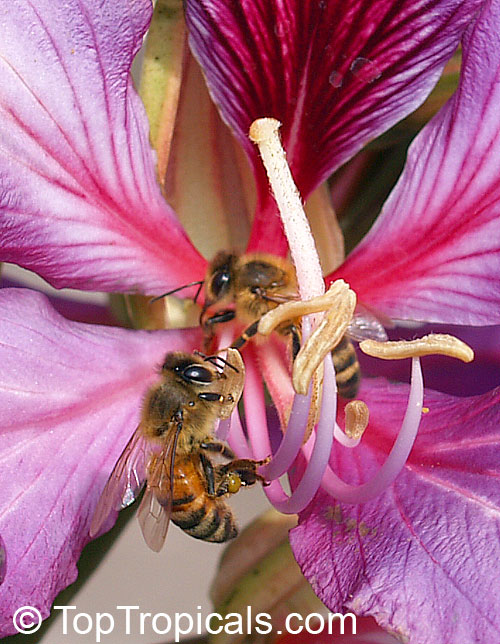 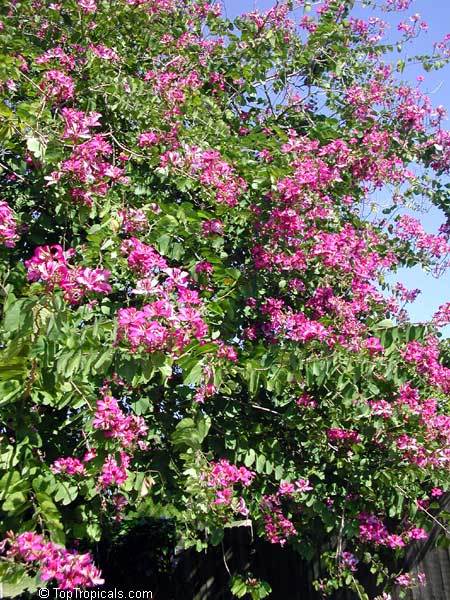 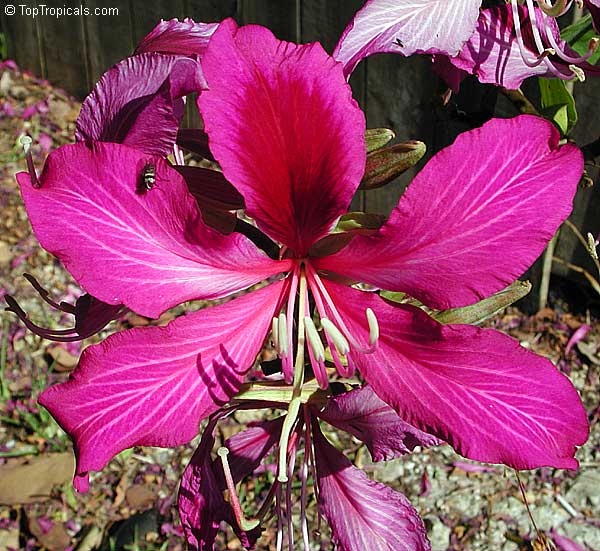 The flag of Hong Kong 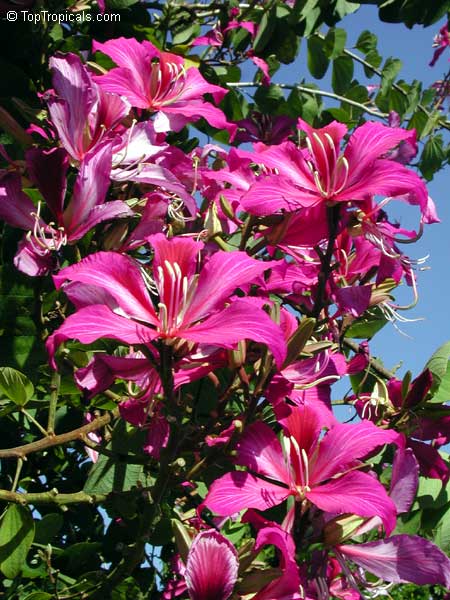 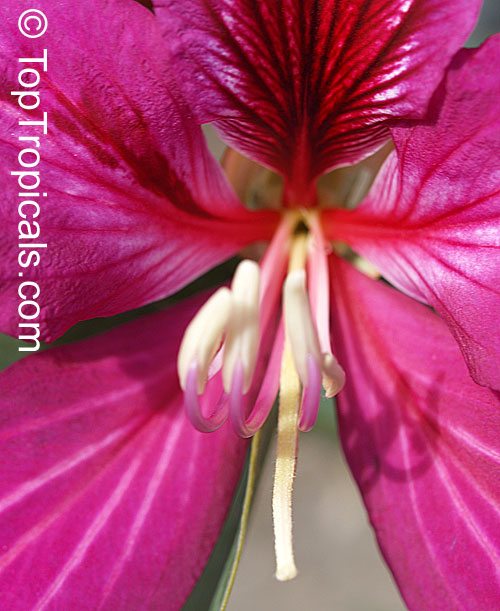 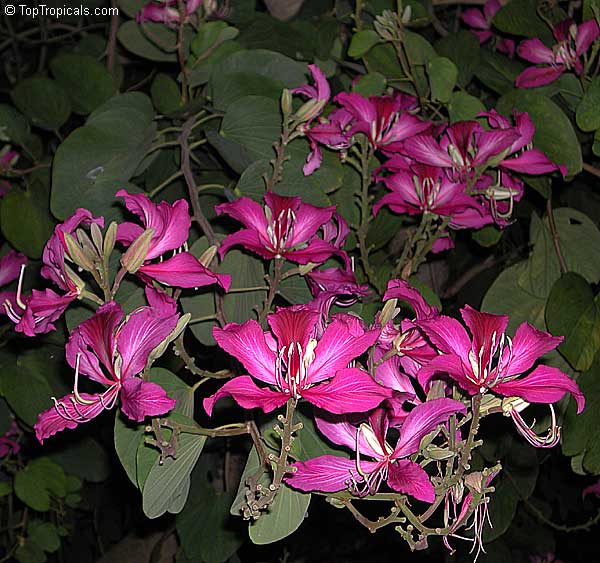 This medium size quick growing tree up to 20 feet tall, 25 feet wide, with thick, large (5-8" and wider) heart shaped, alternate leaves with 2 lobes and veins radiating from the base of the leaf. It may lose leaves for a short period after a blooming cycle.

The beautiful display of orchid-like blooms makes the tree so desirable for the landscape. Wonderful deep wine-red or magenta bloom has a touch of white. The flower has five-petaled corolla and tubular calyx and is about 4-6" wide. The flowers emit a fine fragrance when it's warm and humid and attract many butterflies and bees. This species has the longest flowering season of all bauhinias from November to April-May.

The flowers are believed to be sterile and will not set seed so the plant will not drop long pods as other orchid trees do. This is one of the reasons why it is so valued for lanscapes: the tree is not messy and won't create any maintanance work.

Flowers can be cut and brought inside the house and put in a vase or a bowl with some water, they stay open for a few days.

Bauhinias do best in full sun, with protection from frost and cold winds. Pruning is not usually required, but can be done after flowering if necessary. The Orchid Tree requres space for spreading (20 to 25 feet spread).

Given the right conditions, the Hong Kong Orchid Tree is very easy to grow and requires no special treatment.

Propagation is by cuttings and air-layering and is not easy.

USDA hardiness zone: 9b-10. Trees will get damaged when nights dip into the mid 20's. 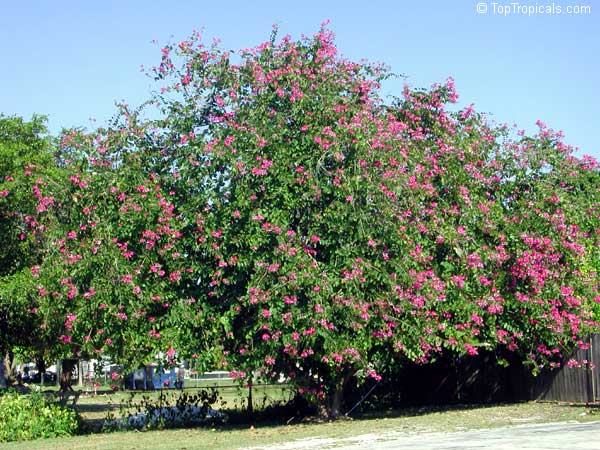 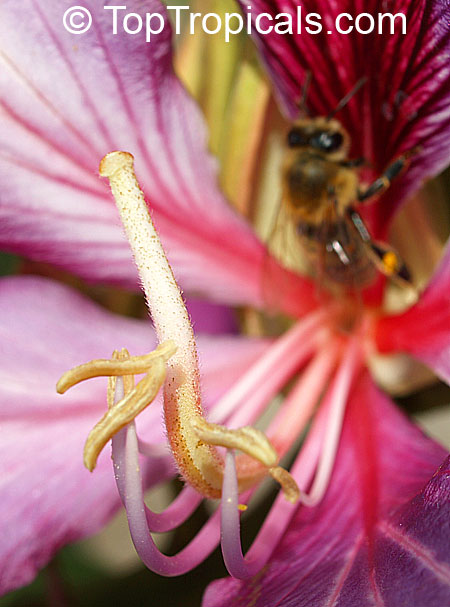 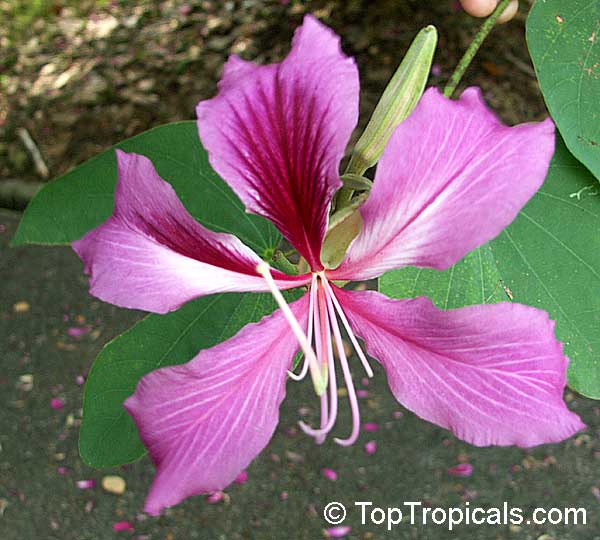 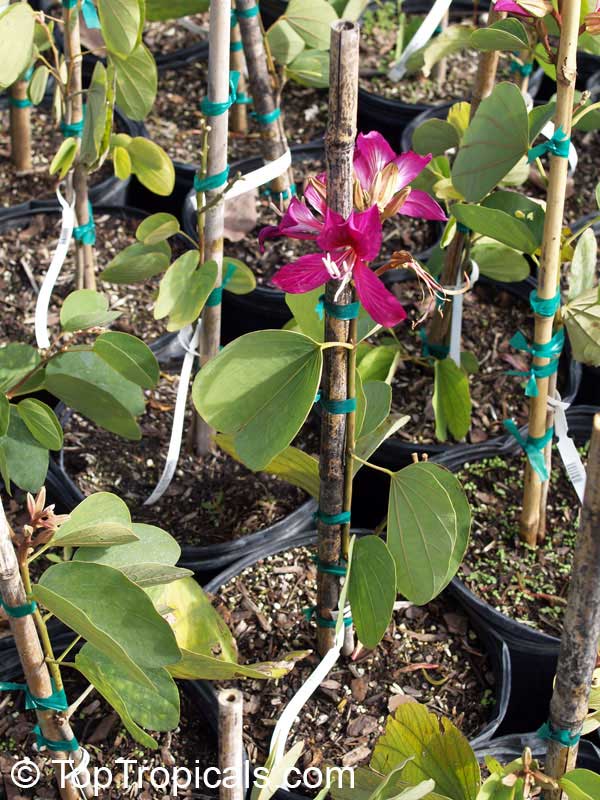 Description of plants available in stock in February 2007: 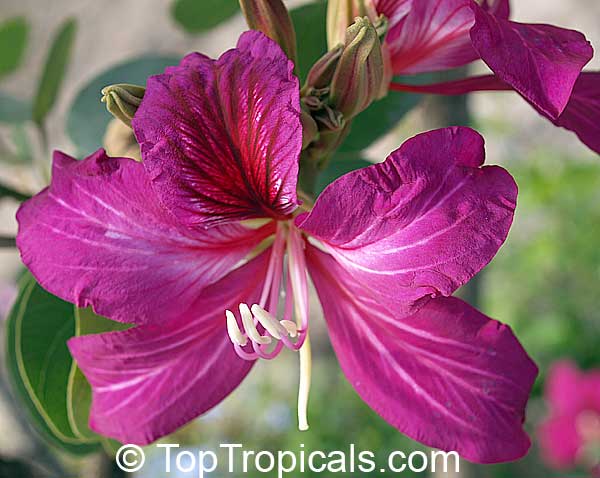 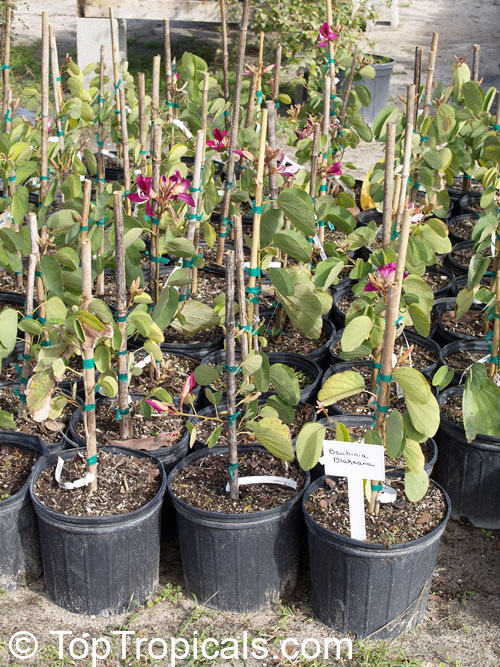 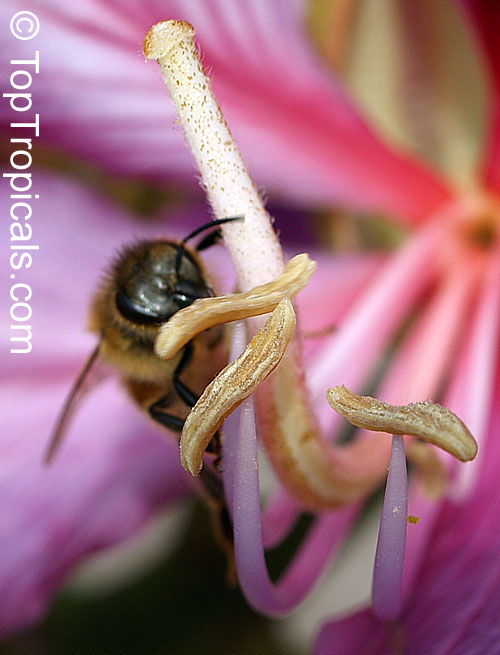