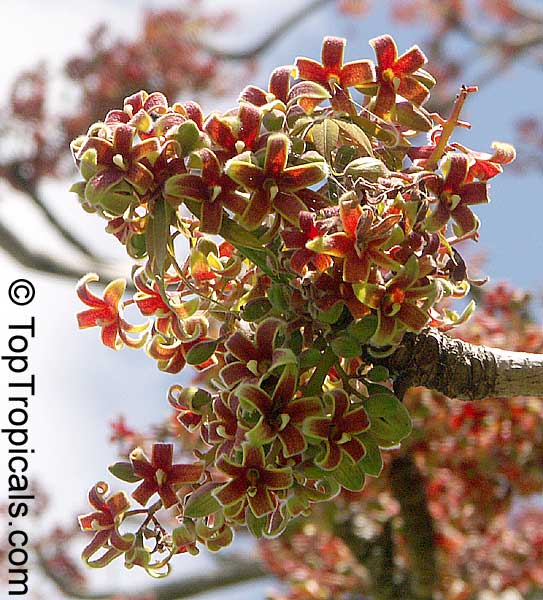 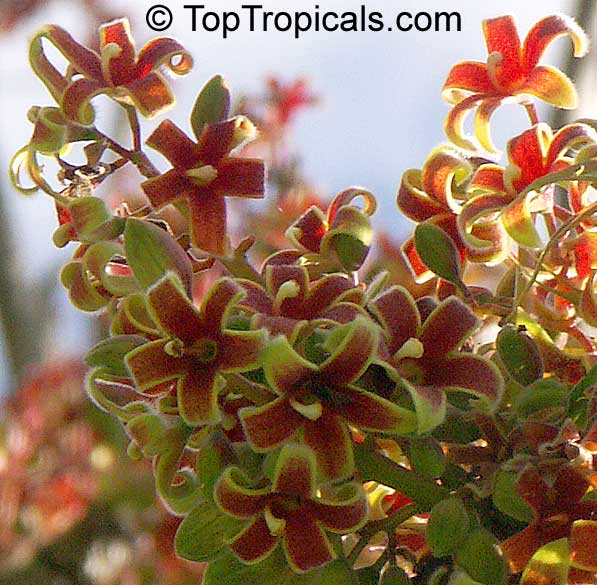 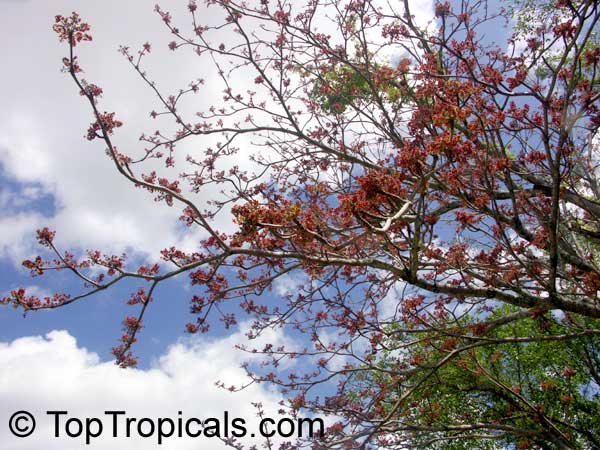 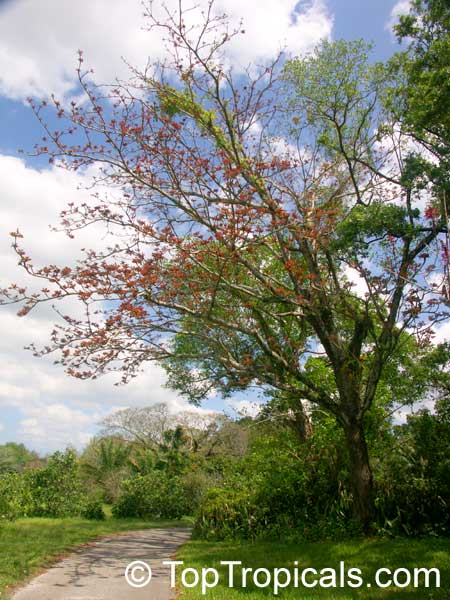 There are many species of Sterculia, most of them erect, handsome trees, but having a variety of leaf-shape. The flowers, too, vary; some are large and attractive, others small, even insignificant; some sweet-scented, others strong-smelling to the extent of being offensive. They are related to the Silk Cottons and, with them, bloom in the early part of the year, sometimes before the new leaves appear.

The Wild Almond (Sterculia foetida) is a tall, straight, noble tree, transcendent in the fresh, full leafage of March and April. Originally from East Africa and North Australia, it grows freely down the West of the Peninsular, in Burma and Ceylon.

The grey bark is smooth, spotted with brown and faintly ridged. At certain times of the year patches of bark loosen and fall away, which impairs the appearance of the tree. The branches are whorled and usually horizontal, the numerous branchlets gracefully up-curved and crowded at the ends with large, digitate leaves, remind one somewhat of the English Horse-chestnut. The flowers, however, bear no resemblance at all to this tree. Appearing early in February, they form at the knotty ends of the wrinkled old branchlets immediately beneath the new leaves and spread in drooping rays as much as one foot in length. The reddish-green stems bear numerous short branched stalks, each terminating in a crimson-brown flower. The calices, in appearance like petals, of which there are none apparent, are about 1-inch across, five-sepalled, back-curling and varying in color from yellow to pale terracotta and to deep crimson and brown. But the main characteristic of these flowers is their incredible stench. Coming across a Wild Almond in bloom ones first thoughts would be that one was near an open sewer and any part of the tree when bruised or cut emits this unpleasant odour. It is unfortunate as the tree is extremely handsome; tall and straight, its well shaped crown swathed in coral, often without a single touch of green, it stands out amongst the surrounding verdure in great beauty and dignity.

The leaves which spring in groups of about seven from the ends of the branchlets are born on long stalks and consist of from five to seven 6-inch leaflets issuing from a central point - a hand-like formation. Young leaves are a rich, pale green, slightly downy and from them a green dye may be obtained.

By March no more flowers are to be seen and the tree is crowned with an abundance of fresh green, drooping leaves. In April the fruit clusters become very conspicuous, looking like odd, black objects casually thrown into the tree. Each nut as large as a man's fist, they are dark, smooth and boat-shaped, woody in texture and eventually burst open into four sections. The many filbert-sized, black seeds are roasted and eaten like chestnuts, but if taken raw and in excess they bring on nausea and vertigo.

Leaves and bark have considerable medicinal value. The wood is pale, lasting and does not split; it furnishes some of the masts known as "poon spars." The inodorous nature of the tree is emphasised in its name - Sterculia being from a word meaning "dung" enid foetida meaning " stinking "!

S. urens is a fairly common variety bearing, in February and March, small, greenish-yellow flowers, hirsute and sticky. The leaves are hand-shaped and similar to those of the previous tree. In Hindi it is known as Gulu, in Marathi as Karai and in Tamil as Kavali.

S. villosa flowers at the same time and has long tresses of small, yellow and scarlet blossoms. Its fruit is large, red and downy. The bark is easily stripped and employed in the making of bags and ropes. It makes the common rope used by elephant hunters in the Himalayas and elsewhere. Its Hindi name is Udar, Ami in Tamil.

S. alata, Tula in Bengal, is another variety, popular for roadside planting and conspicuous when in fruit as the huge, wooden nuts are often more than 6 inches in diameter. The dull green, fragrant flowers appear about March.

A fourth variety is S. colorata, Bodala in Hindi, Bhai-koi in Bombay and Kowsey in Marathi, which loses its leaves in the cold season and in March produces on the bare branches numerous, erect spikes of small, orange-red blossoms and buds. The leaves, which appear shortly after, are broadly lobed, each lobe narrowing to a point. The seeds are displayed before ripening as the pink fruit opens out flat - appearing rather like dry leaves. 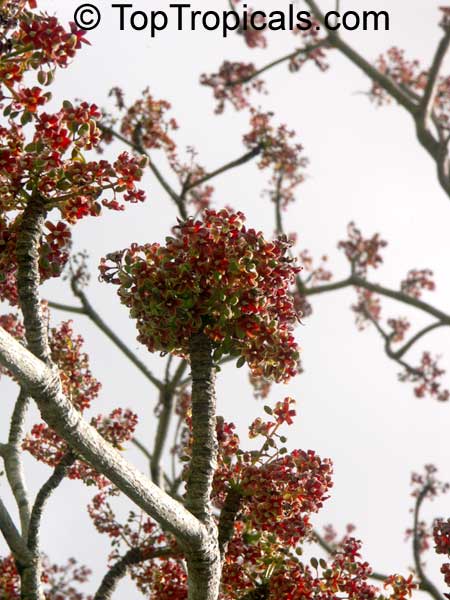