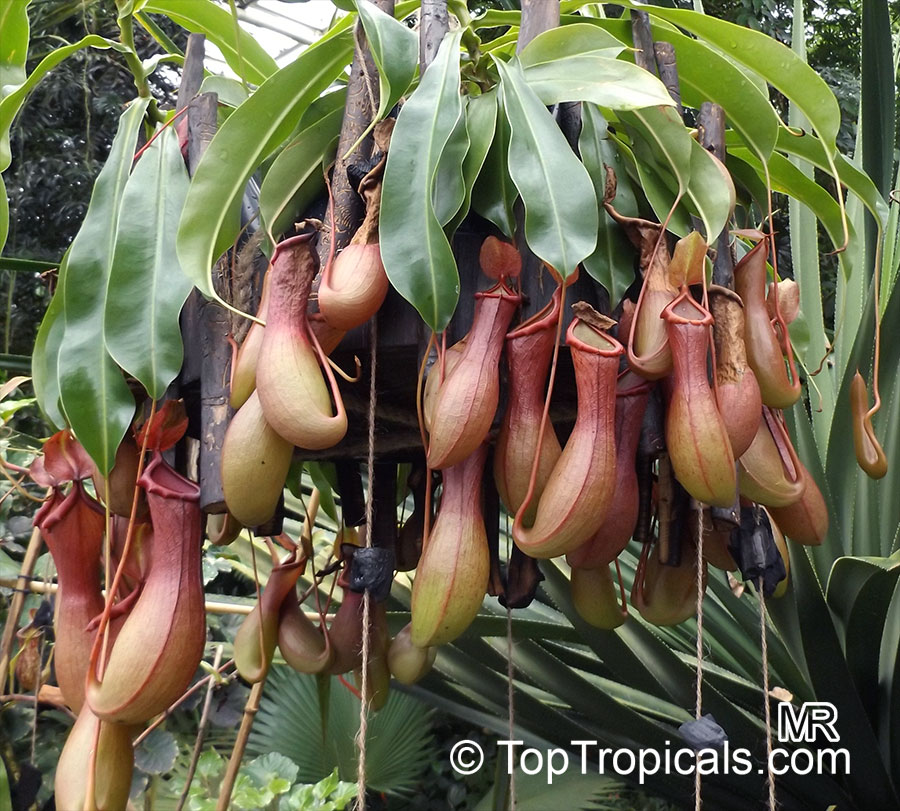 ...Prey usually consists of insects, but the largest Nepenthes species may occasionally catch small vertebrates, such as rats and lizards. Records of cultivated plants trapping small birds have been made!..

Did you know that among plants, as well as among the animal world, you can find plants that feed on... meat! Or have you heard, but have never seen or imagine what they look like? Then this story is for you. Take a look and... and perhaps you will invite this unusual predator beauty into your home?.. 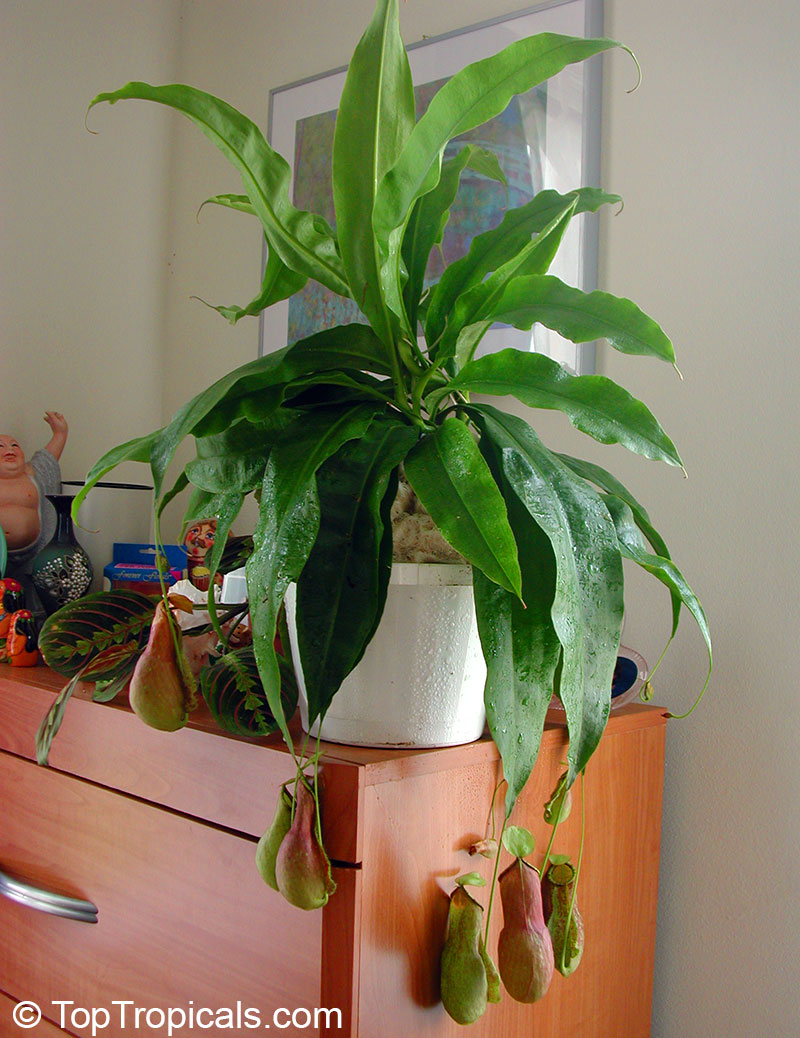 Carnivorous  are plants that derive some or most of their nutrients from trapping and consuming animals or insects and other arthropods. However, they still generate energy from photosynthesis. Carnivorous plants have adapted to grow in places where the soil is thin or poor in nutrients, especially nitrogen, such as acidic bogs. 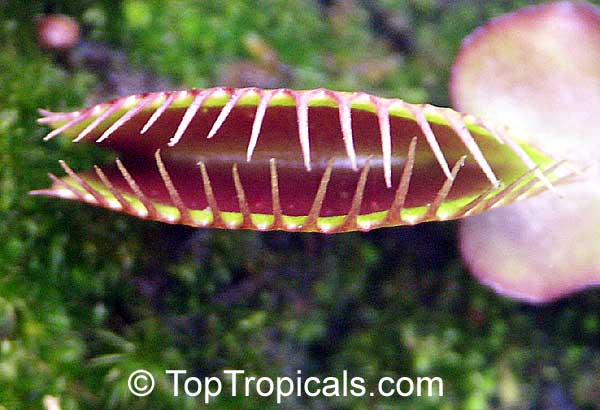 True carnivory is thought to have evolved independently nine times in five different orders of flowering plants, and is represented by more than a dozen genera. Carnivorous plants can be found on all continents except Antarctica, as well as many Pacific islands.
Five basic trapping mechanisms are found in carnivorous plants:
- Pitfall traps (pitcher plants) trap prey in a rolled leaf that contains a pool of digestive enzymes or bacteria.
- Flypaper traps use a sticky mucilage.
- Snap traps utilise rapid leaf movements.
- Bladder traps suck in prey with a bladder that generates an internal vacuum.
- Lobster-pot traps, also known as eel traps, use inward-pointing hairs to force prey to move towards a digestive organ.

These traps may be active or passive, depending on whether movement aids the capture of prey. 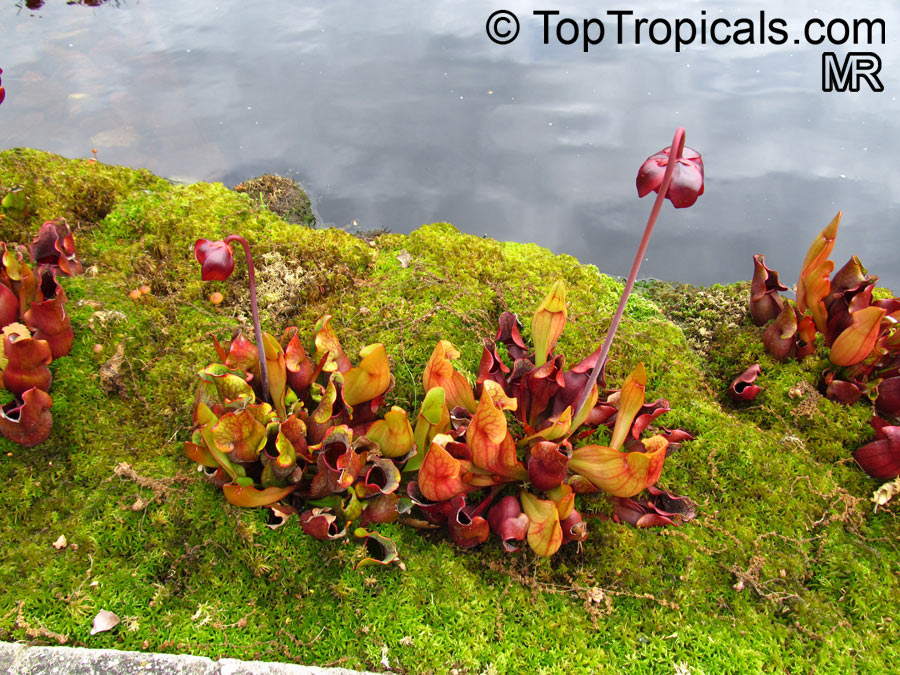 The term "pitcher plant" generally refers to members of the Nepenthaceae and Sarraceniaceae families - the most species-rich families of pitcher plants.
Nepenthes is a genus of carnivorous plants, also known as tropical pitcher plants, or monkey cups, in the monotypic family Nepenthaceae. The genus comprises about 170 species, and numerous natural and many cultivated hybrids. They are mostly liana-forming plants of the Old World tropics, ranging from South China, Indonesia, Malaysia, and the Philippines; westward to Madagascar and the Seychelles; southward to Australia and New Caledonia, and northward to India and Sri Lanka. The greatest diversity occurs on Borneo, Sumatra, and the Philippines, with many endemic species. 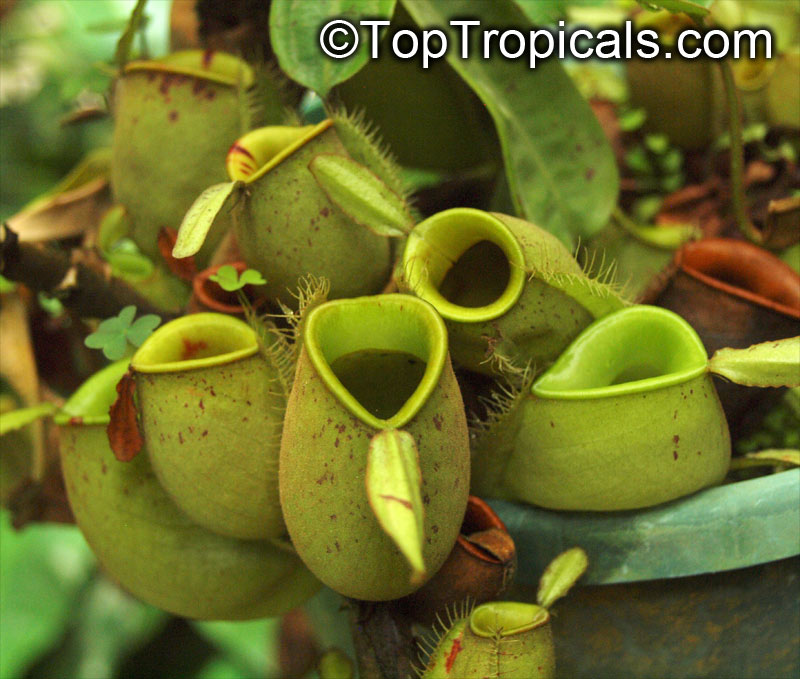 The name "monkey cups" refers to the fact that monkeys were once thought to drink rainwater from the pitchers. This is false; monkeys do not drink from them, and the pitchers are filled with digestive juices, rather than rainwater.
The pitchers are borne at the end of tendrils that extend from the midrib of an otherwise unexceptional leaf: Nepenthes are typically characterized as having reduced and symmetrical pitchers with a comprehensive waxy coating on the surface of the inner pitcher wall. The plants themselves are often climbers, accessing the canopy of their habitats using the aforementioned tendrils, although others are found on the ground in forest clearings, or as epiphytes on trees. 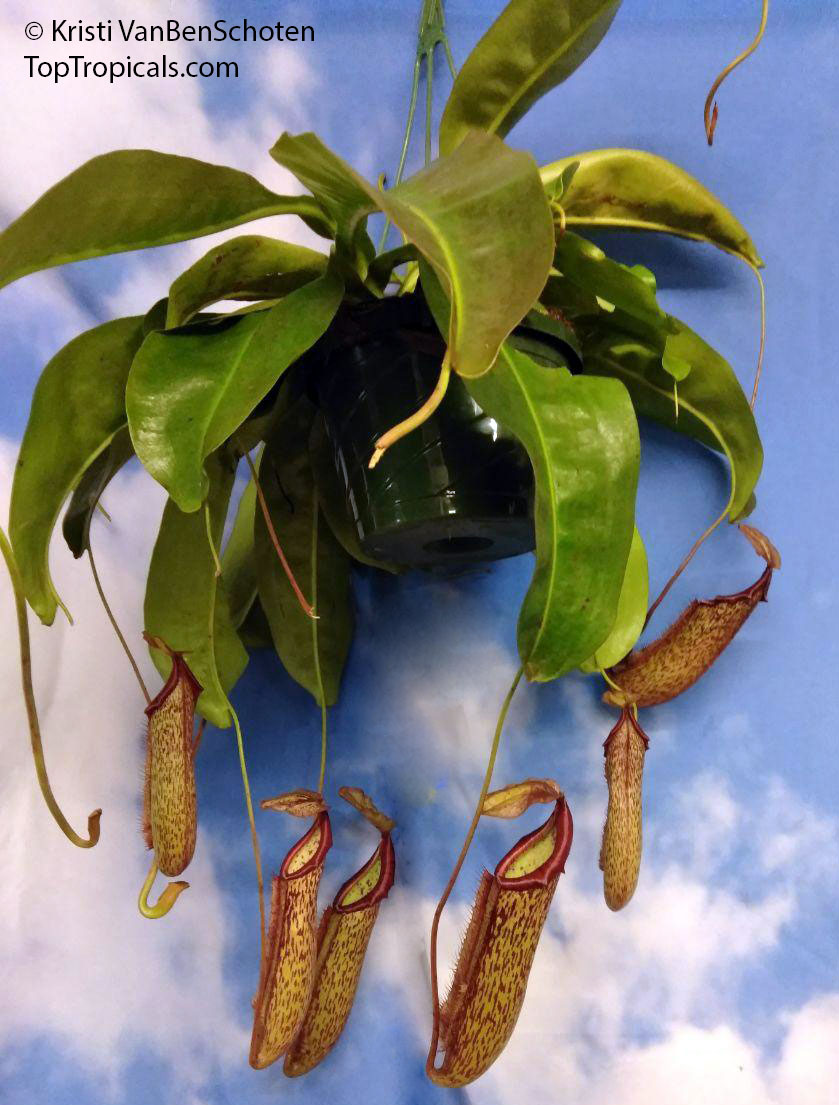 Nepenthes species usually consist of a shallow root system and climbing stem, often up to 50ft long and more. From the stems arise alternate, sword-shaped leaves with entire leaf margins. An extension of the midrib (the tendril), which in some species aids in climbing, protrudes from the tip of the leaf; at the end of the tendril the pitcher forms. The pitcher starts as a small bud and gradually expands to form a globe- or tube-shaped trap. The shapes can evoke a champagne flute. 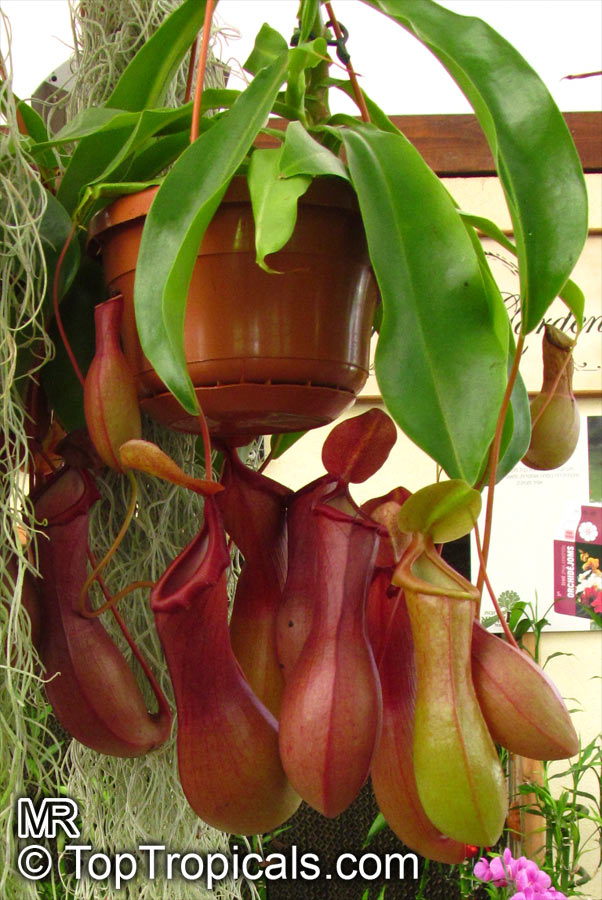 The trap contains a fluid of the plant's own production, which may be watery or more viscous, and is used to drown the prey. This fluid contains viscoelastic biopolymers that may be crucial to the retention of insects within the traps of many species. The trapping efficiency of this fluid remains high, even when significantly diluted by water, as inevitably happens in wet conditions.
The lower part of the trap contains glands which absorb nutrients from captured prey. Along the upper inside part of the trap is a slick, waxy coating which makes the escape of its prey nearly impossible. Surrounding the entrance to the trap is a structure called the peristome (the "lip"), which is slippery and often quite colorful, attracting prey, but offering an unsure footing. 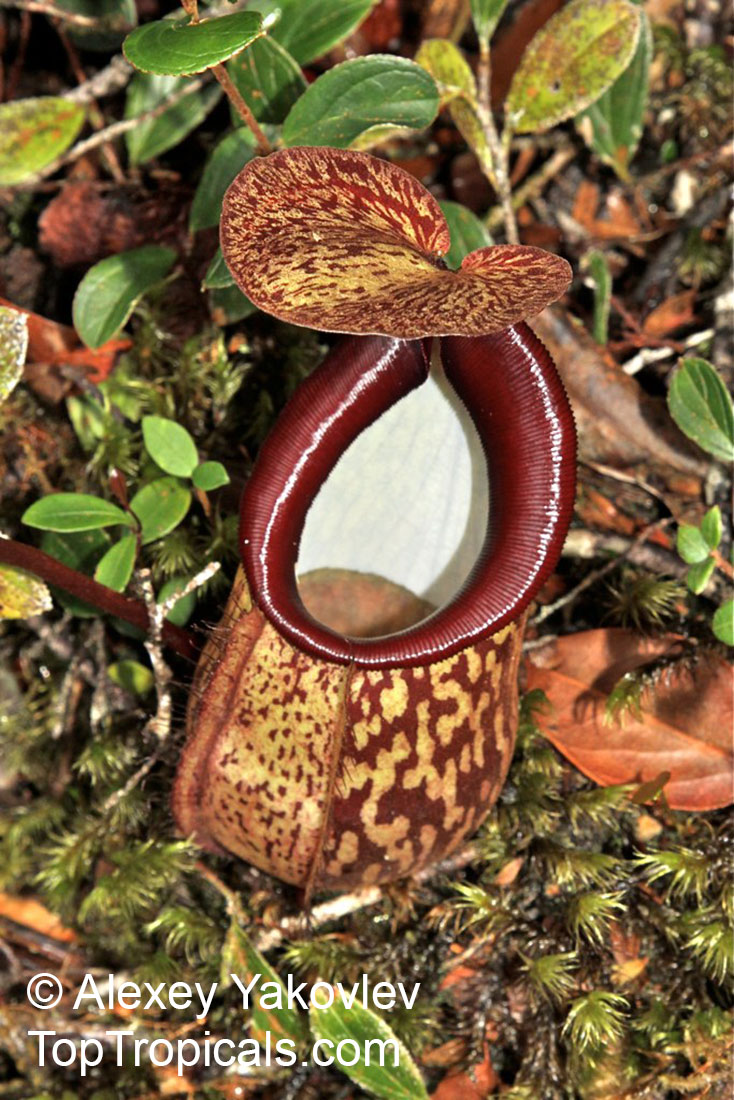 Above the peristome is a lid (the operculum); in many species, this keeps rain from diluting the fluid within the pitcher, the underside of which may contain nectar glands which attract prey. Prey usually consists of insects, but the largest Nepenthes species may occasionally catch small vertebrates, such as rats and lizards. Records of cultivated plants trapping small birds have been made! 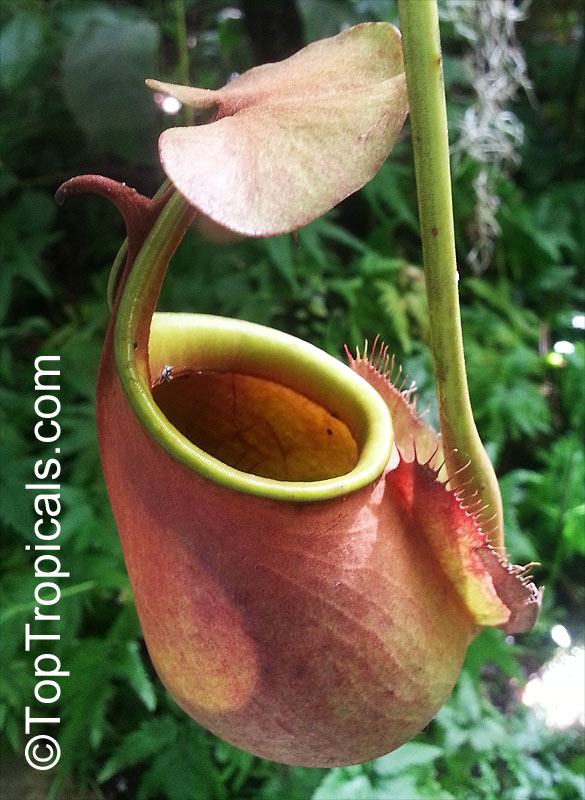 Flowers occur in racemes or more rarely in panicles with male and female flowers on separate plants. They are insect-pollinated, the primary agents being flies (including blow flies, midges, and mosquitoes), moths, wasps, and butterflies. Their smells can range from sweet to musty or fungus-like. Seed is typically produced in a four-sided capsule which may contain 50–500 wind-distributed seeds. 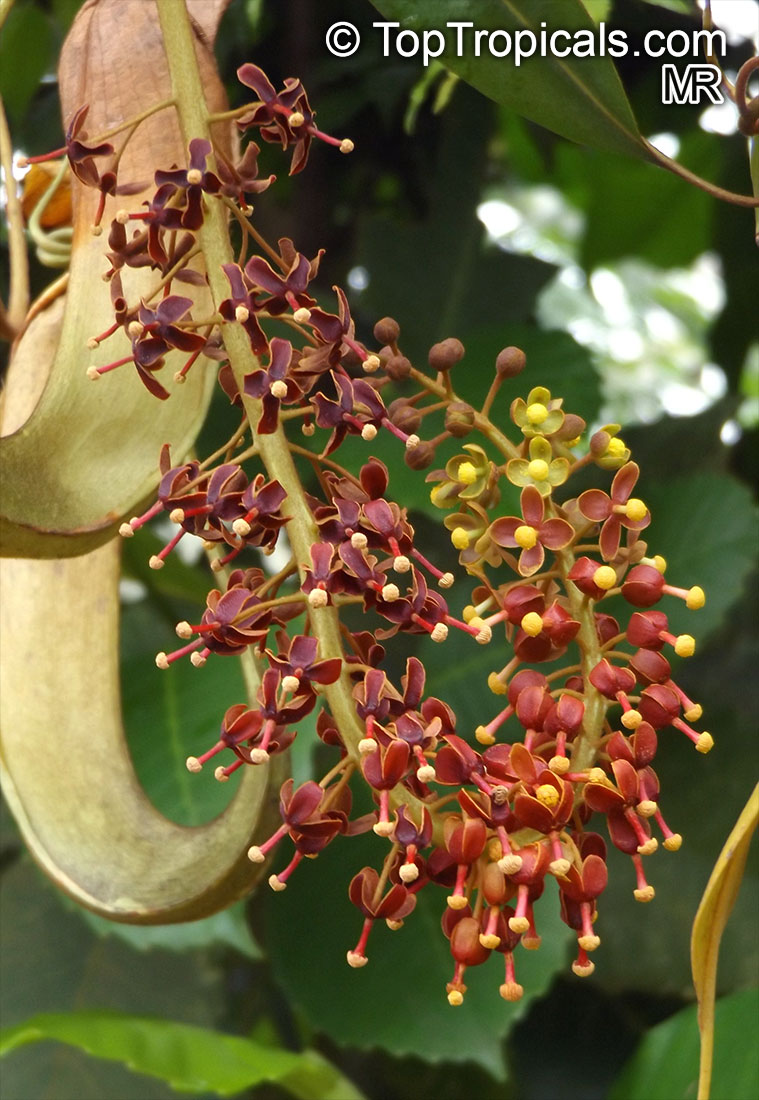 The most obvious interaction between Nepenthes species and their environments, including other organisms, is that of predator and prey. Nepenthes species certainly attract and kill their prey, albeit passively, through active production of attractive colors, sugary nectar, and even sweet scents. From this relationship, the plants primarily gain nitrogen and phosphorus to supplement their nutrient requirements for growth, given these soil nutrients are typically lacking. The most frequent prey is an abundant and diverse group of arthropods, with ants and other insects topping the menu.
Nepenthes have also formed a dependent relationship with vertebrates and insects. So, for example, Nepenthes bicalcarata provides space in the hollow tendrils of its upper pitchers for the carpenter ant to build nests. The ants take larger prey from the pitchers, which may benefit plant by reducing the amount of putrefaction of collected organic matter that aid the plant's digestion.
The pitchers of Nepenthes lowii provide a sugary exudate reward on the reflexed pitcher lid (operculum) and a perch for Treeshrew (Tupaia montana), which have been found eating the exudate and defecating into the pitcher. A 2009 study, which coined the term "Treeshrew lavatories", determined between 57 and 100% of the plant's foliar nitrogen uptake comes from the faeces of Treeshrews.
Similarly, Nepenthes hemsleyana, which is native to Borneo, has a symbiotic partnership with Hardwicke's woolly bat. During the day, a bat may roost above the digestive fluid inside the pitcher. While a bat is inside, it may defaecate and the plant can get nitrogen from the droppings. 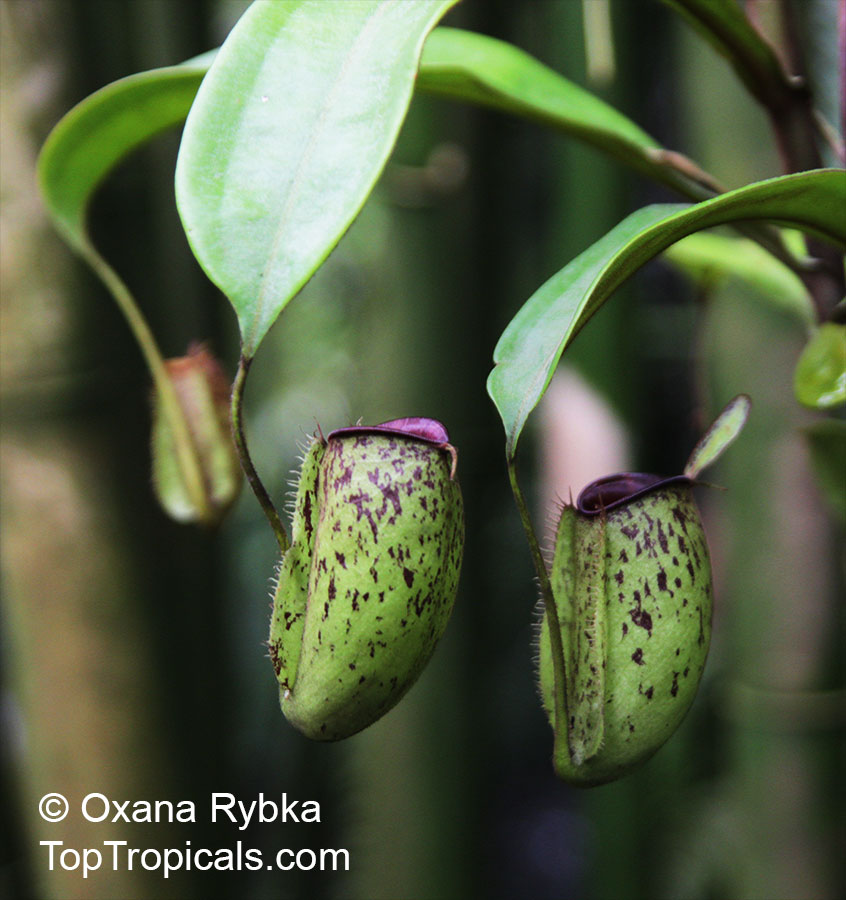 Nepenthes may be cultivated in greenhouses. Easier species include Nepenthes alata, Nepenthes ventricosa, Nepenthes khasiana, Nepenthes sanguinea, and Nepenthes alata is the most popular in home cultivation.
Nepenthes alata is extremely versatile and adaptable to many different growing conditions. Depending on where you live many of the needs of Nepenthes can be met by adapting them to your growing environment. This plant does well in both cooler or warmer conditions. Grow this fascinating pitcher plant in your home and it’s bound to draw some interest. This intriguing carnivorous plant not only makes an attractive and interesting feature in your home but it doubles up as a fly catcher too! 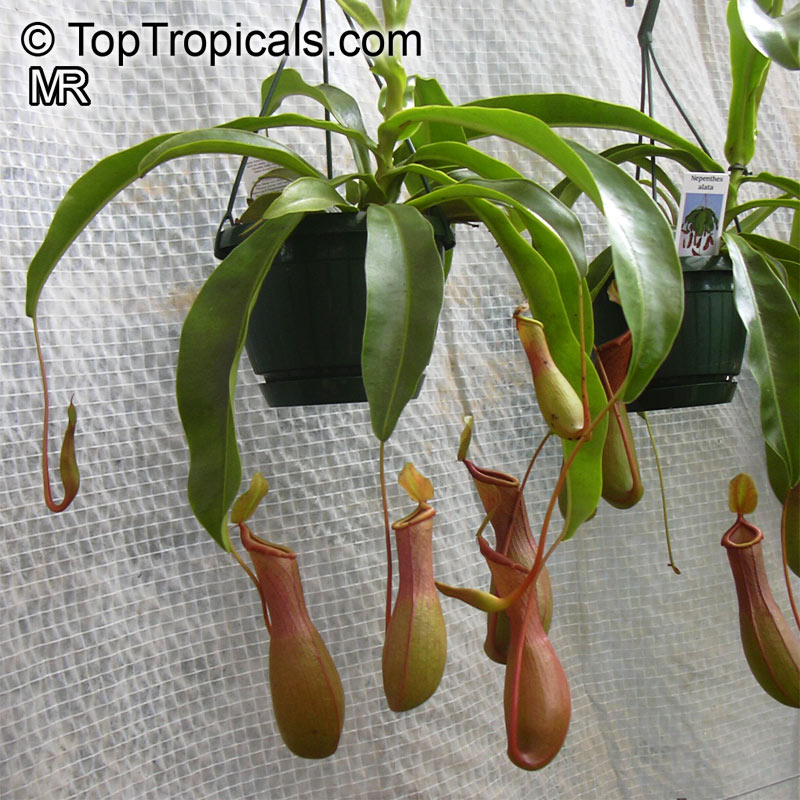 The plants are upright but have large pitcher flowers which hang down on thread-like stems. A great choice for an indoor hanging basket or pot, the pinkish coloring of the flowers provides a splash of color beneath the green leaves. It is one of the easier Nepenthes types to grow, not requiring particularly difficult conditions, you can enjoy this plant in your kitchen, bathroom or any sunny windowsill. 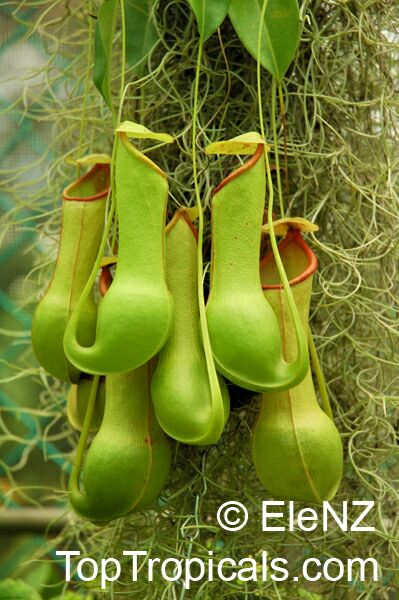 The cultivar Nepenthes khsiana x ventricosa x maxima is a compact, easy-to-grow hybrid. It is a vigorous growing carnivorous tropical pitcher plant with large upright pitchers with cherry red speckles on yellow-green backgrounds. The trap mouths are wide and oval. Its parent species are quite adaptable, growing in the open or shade, among grasses and shrubs. It is very cold tolerant, but prefers warm, humid, bright conditions. It is quite good at catching large insects, such as: stink bugs, wasps and yellow jackets. It is a great house plant, that can be grown outdoors in the warm weather with a minimal transition period.
Nepenthes alata and Nepenthes x khsiana are good Nepenthes for beginners – invite them in your home! 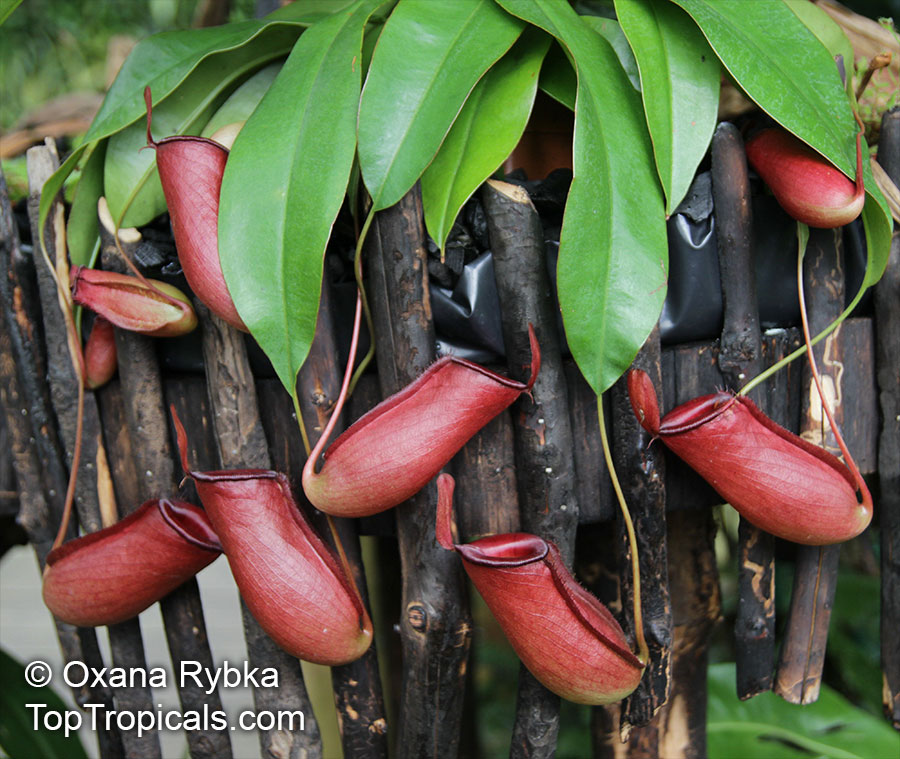 And some advice at last. After situating the plant where it is to grow, add a little water to the pitchers, about 1/2- 3/4 inch. In shipping or transporting, the fluid normally present gets dumped out and sometimes these pitchers will dry out and die. Refilling helps combat this. Pitchers and leaves die naturally as the plant grows and these should be trimmed off for best culture. Since many Nepenthes are vines, we suggest pruning the green stems back to encourage side shoots and a fuller plant.
The vines can also be trained up a stake or left to hang low in an elevated container such as a hanging basket. Allowing the vines to descend often encourages the plant to put up new basal shoots, resulting in a prettier plant. It is best not to prune more than 30% of the foliage off the plant at any one time. If the plant fails to make pitchers, increase humidity. Be careful: avoid dripping cold water on the leaves and don't mist them as it can encourage leaf spotting or diseases.
Do not fertilize these plants with dry fertilizer! They get all their food from "eating" insects! If you are growing the plant where it cannot catch insects for long periods, you can add an occasional small insect such as a fly, a cockroach or a few very small insects to mature pitchers. This is not normally needed. Many types benefit from very mild, diluted liquid orchid fertilizer such as SUNSHINE Orchidasm, and solution should be added only to the pitchers when they are 3/4 filled with water. 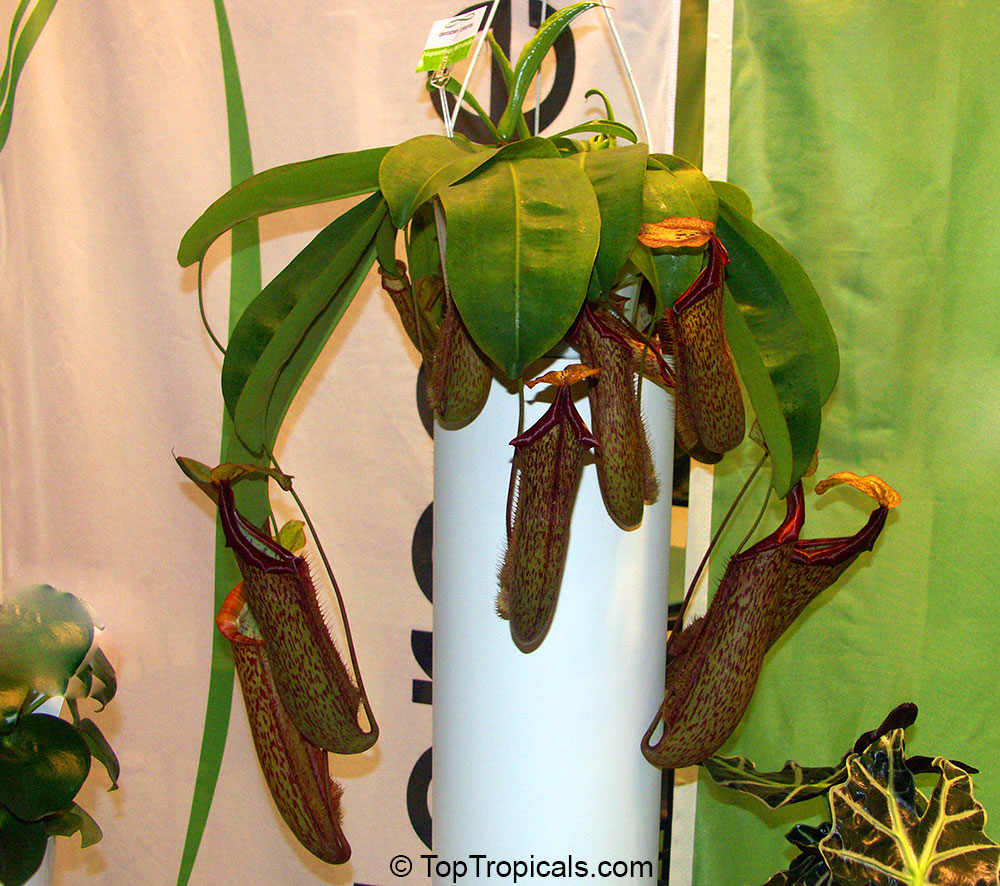