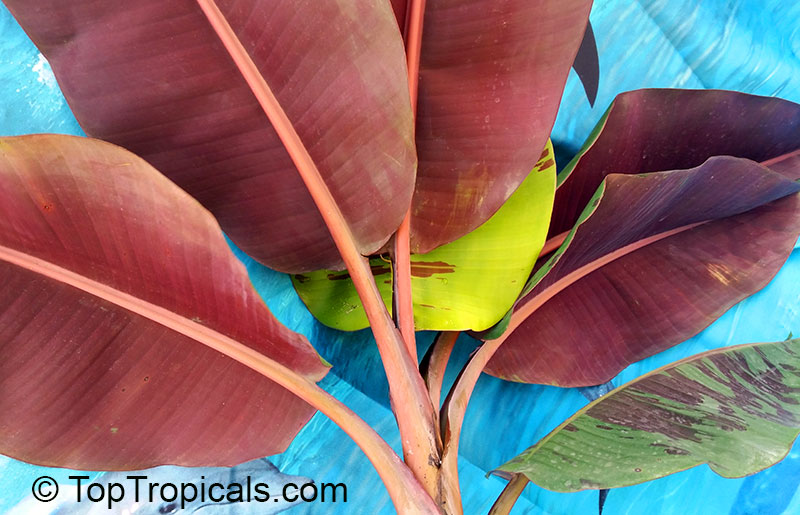 ...Blood Banana plants grow 6-8 ft tall in the wild, but are well-adapted to container growing and can be maintained at only 3-5 ft. They produce huge paddle-shaped leaves that grow to 6 ft long! The undersides of these large leaves are purple to red... 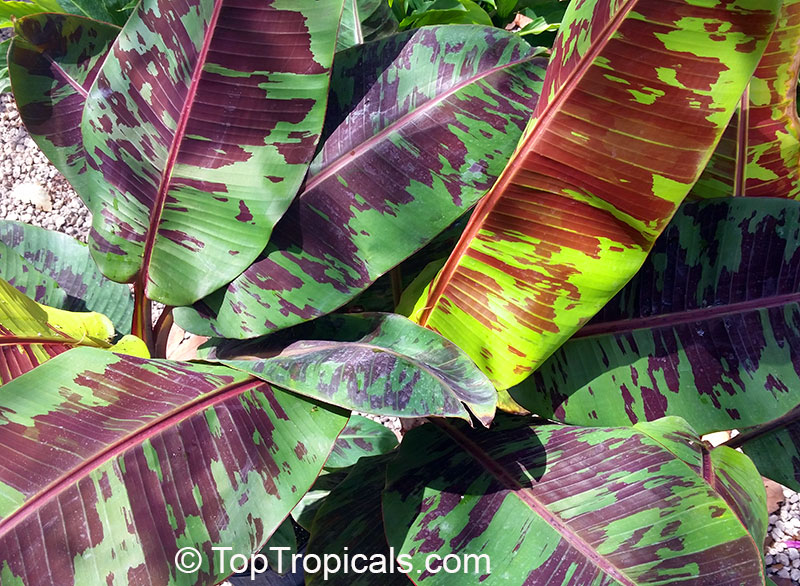 Would you like something special, fabulous, as a gift? Who doesn't? And we have a real miracle for you. Of course, this is a plant, moreover, it is a banana. Banana? Banana as a miracle? See for yourself...

The Blood Leaf Banana (Musa acuminata x sumatrana var. Zebrina Rojo) is a hybrid of the wild banana species Musa acuminata, one of the two ancestors of modern edible bananas. It was once classified as separate species under the now invalid names (synonyms) Musa zebrina and Musa sumatrana. It was also sometimes incorrectly classified as a cultivar. 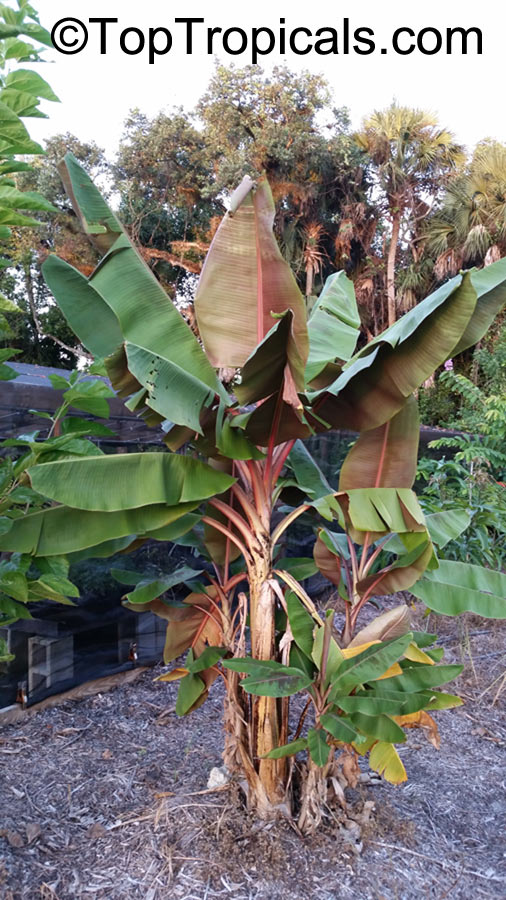 The Blood Banana is also known as the Red Banana Tree, though it should not be confused with the red banana cultivar. Other common names include seeded Red Banana, Sumatra Ornamental Banana, and Maroon-variegated Banana Plant. They are also known as Zebrina Rojo in Spanish.

Blood Bananas are native to Java and Sumatra (Indonesia). They are notable for being one of the earliest banana subspecies to be spread by humans out of Southeast Asia. Introduced eastward to Africa, they became the ancestors for the genetically distinct and commercially important East African Highland bananas. 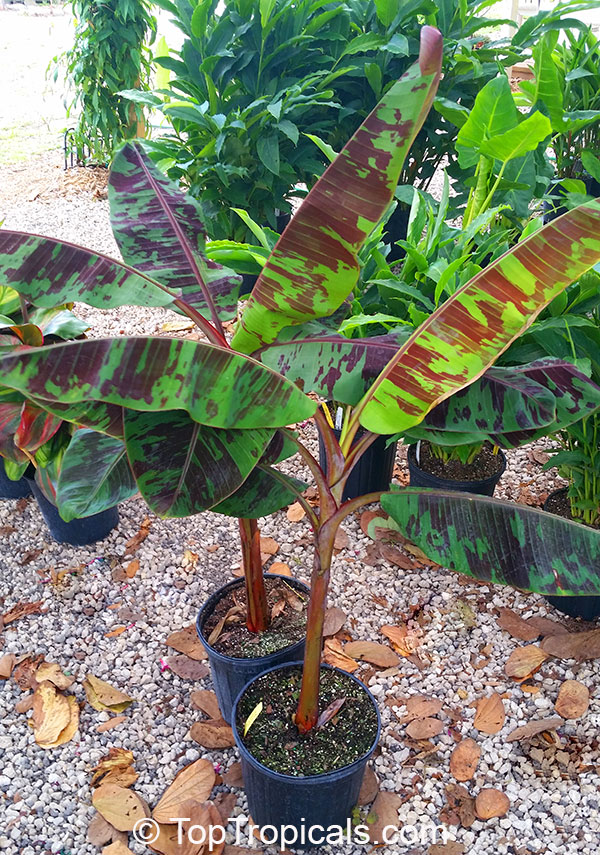 Blood Banana plants grow 6-8 ft tall in the wild, but are well-adapted to container growing and can be maintained at only 3-5 ft. They produce huge paddle-shaped leaves that grow to 6 ft long! The undersides of these large leaves are purple to red, contrasting with solid-green companion plants, and perform well in containers.

Younger plants may not flower until the 2nd or 3rd year (in cooler climates, plants cut close to the ground in fall each year may never flower, so container would be a better option). After flowering and fruiting, the pseudostem dies, but the roots push out new shoots (suckers) which form new pseudostems.

The beautidul, red to orange fruit are the end result of the flowers produced by Zebrina Rojo, although the quality of these bananas is debated. Whatever the case, Zebrina Rojo belongs to the species Musa acuminata making it a close cousin to the popular edible Cavendish bananas. 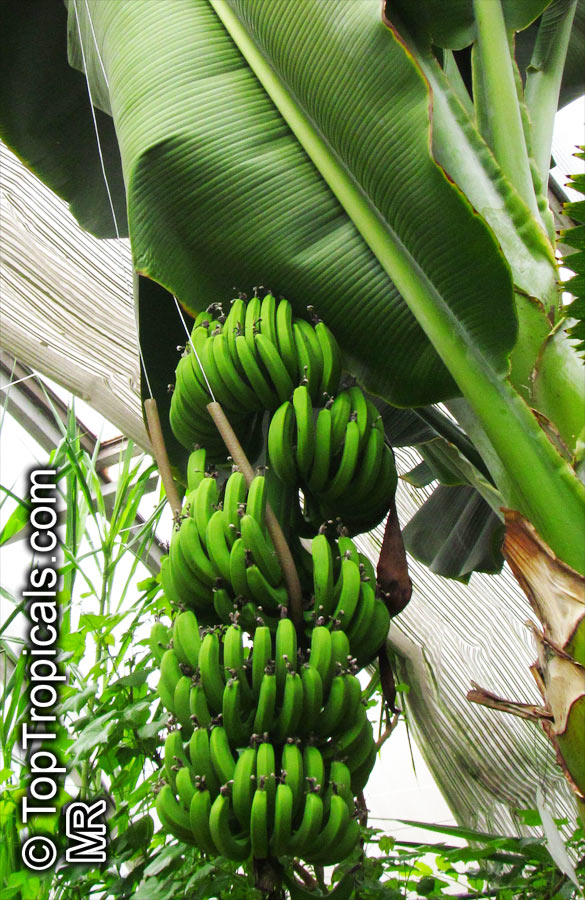 Nevertheless, Musa acuminata var. zebrina is primarily grown for its ornamental value. It is a classic tropical foliage plant, which, if it fruits, produces bunches of very showy bananas. It is spectacular when grown as a garden centerpiece or for tropical flair near water bodies. This plant is a much more manageable container plant or houseplant than other representatives of the species.

These plants are winter hardy to USDA Zones 9-11, and even in cooler zones may be grown directly in the ground (if dug in fall), in containers, or as houseplants. Best grown in organically rich, medium moisture, well-drained soil in full sun. Plants tolerate and often appreciate some part shade or light filtered sun in the heat of the day.

Site plants in areas protected from strong winds which can severely damage the large leaves. For containers, use a well-drained potting mix. Keep container soil slighy moist but not wet. Fertilize regularly during growing season like you would with other banana plants. Use Sunshine Robusta during active vegetative stage, and switch to Sunshine C-Cibus when the plant is ready to flower and fruit. 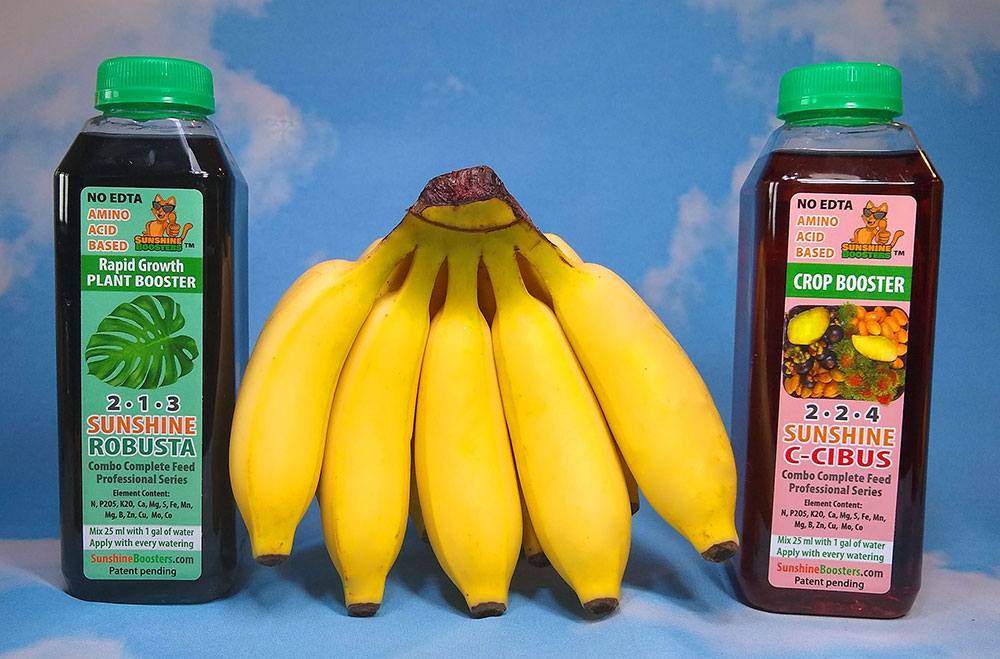 Outside of tropical and subtropical zones, bananas must be overwintered indoors, either as houseplants or by forcing them into dormancy.

Bring container indoors in fall before the first frost and place in a large sunny room for overwintering as a houseplant, with reduced water and fertilization.

If you have a large specimen growing directly in the ground, every Fall you need to dig it out before the first frost, wrap roots, trim back the leaves and store in a cool, dark, frost-free area until spring. When using this option, foliage may be trimmed back or left on the plant and allowed to brown up in the normal course.

Thus, to get a beautiful exotic plant that will brighten up your life for many years, minimal effort is required. Your Special Gift will last many years… 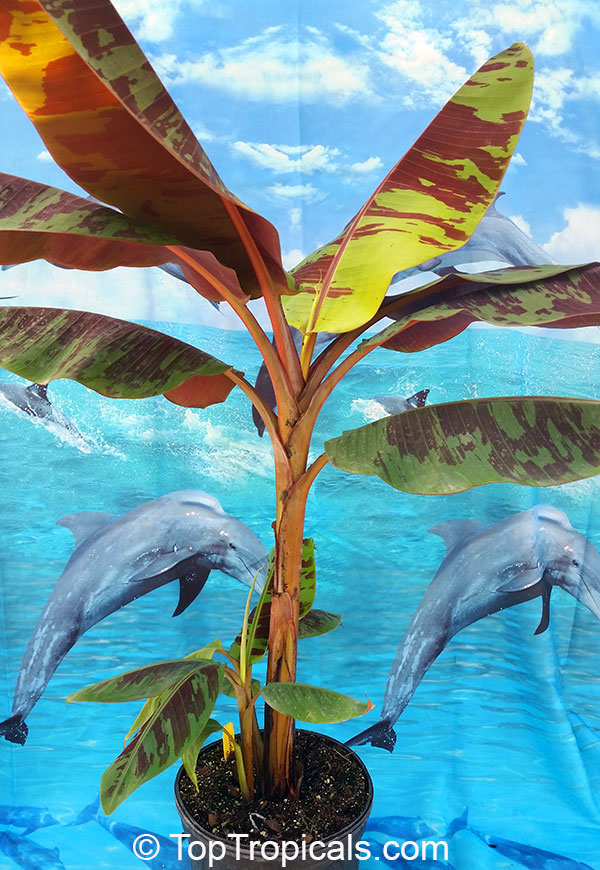