Cacti Alps: the art of growing cacti and succulents outdoors in humid climate

Besides common species as Mango and Avocado trees, and many really exotic plants such as Elephant foot or Bat plant, our garden contains cacti which look rather unusual under heavy tropical rains… Passers-by point in amazement at the cacti bed located in the very center of the front yard.

any people like to grow cacti, and it's easy for those who live in states of Texas and Arizona, but have you tried to grow cacti in Florida under heavy rainfall? The average annual rainfall amount in Miami area is about 60" (1500 mm).

At the beginning, the cacti were kept in clay pots (see more pics of cacti on next pages), and arranged into nice compositions. 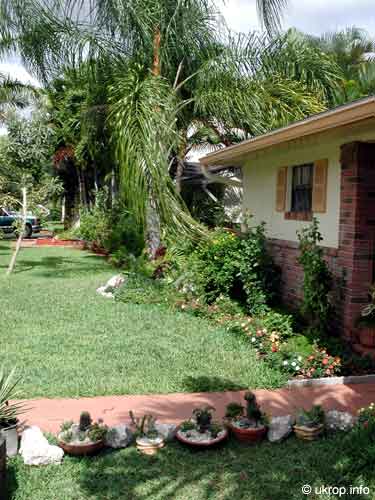 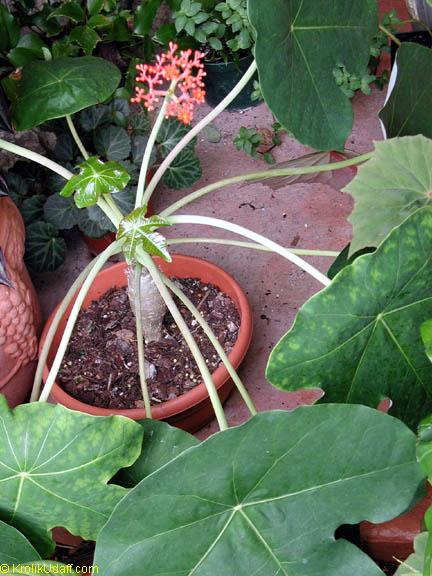 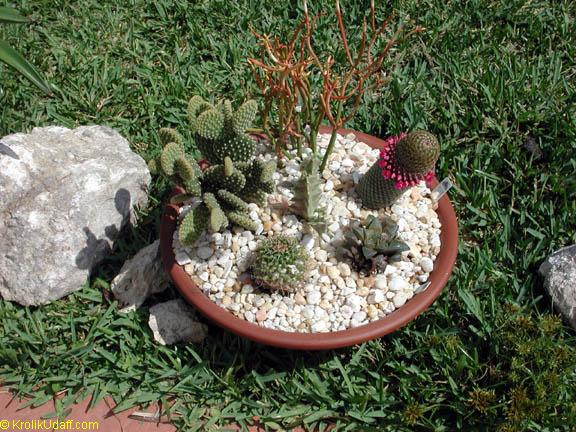 Pots were put outdoors in full sun, that we kept cursing at because the rest of the garden had to be watered manually with the hose every day. Every time we made a promise to build an automated sprinkler system that would water all of the other plants, while the cacti have been enjoying trouble-free life.... 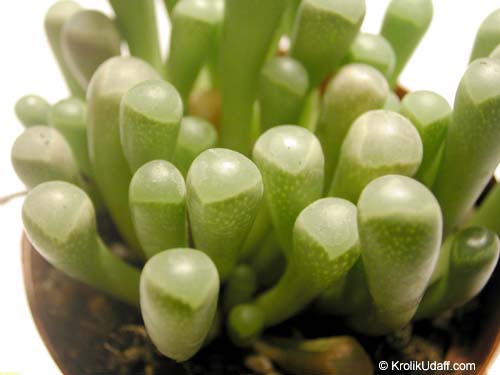 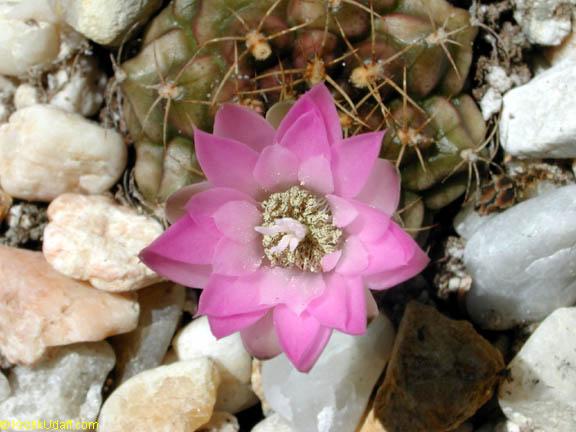 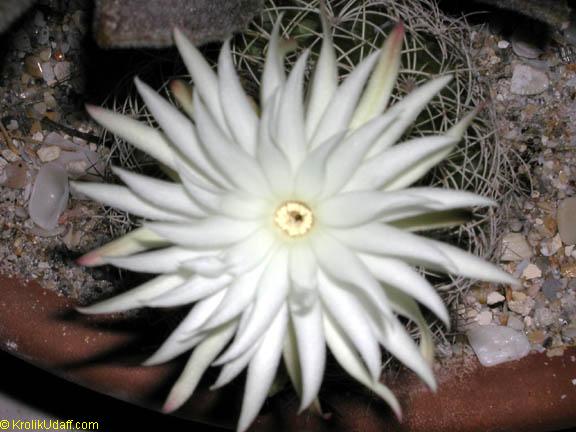 Yet then, somewhere "up there", our complains were finally heard, and rainy season started. The precipitation fell like a ton of bricks upon our garden, so the question of building a sprinkler system has been put off for a long while. In the meantime, cacti were starting to gloom down and die, something had to be done, so they were carried under the roof.

The option of growing them indoors or on patio was rejected because of lack of sunlight: we live at 26 latitude, so the sun is way over your head and it's too dark indoors, besides, the extended roof shed protects you from hot Florida sun. The option of constantly putting the cacti outside for the sun, and rushing to carry them back under the roof as the rain starts was rejected also for an obvious reason. On the other hand, we couldn't plant cacti directly in ground, like you might do in Texas or Arizona. The original soil in our area is clay-like, and would rather provide to be a swamp, than a well-drained medium.

So the idea of a special cacti bed was purposed. This design is called "Alpine Rock garden" (Have anybody seen cacti in Alps?) It's is pretty simple; the bed is above ground level, consisting of sand, compost, gravel, and rock barrier to keep all of that inside. Total area is around 4 square meters with 0.5 m wide border on ground level where we planted water-tolerant succulents such as agave. 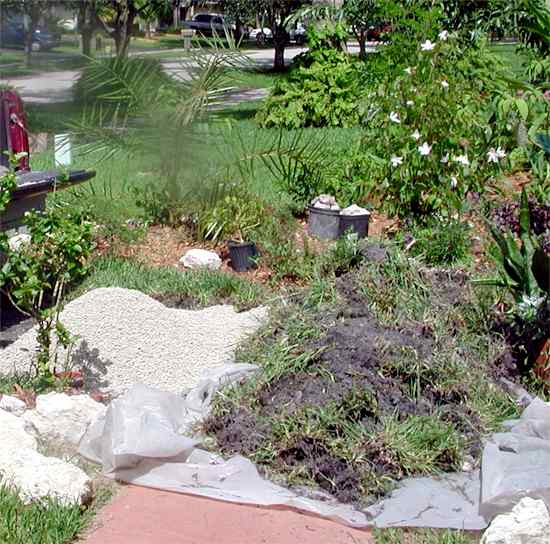 We have taken off the top layer of soil about 8" deep (20 cm), (exposing construction junk left by builders years ago) and put a layer of gravel for better drainage. There were tons of soil taken out (you can see the pile on the right of pic. 6) that was carried to and dumped under the cover of darkness at the neighboring construction field, where we also collect rocks for our landscaping design (the former soviet citizens can't let themselves buy rocks in a store).

After the hole was made, we needed sand, compost, and gravel. The gravel is 5-10 cm in diameter. Lucky we had a truck to bring it. Unfortunately, while being so excited about our project, we had not realized that the camera lens was smothered in dirt, so the picture came out not exactly as we wanted it to… But to remake the whole thing just for another picture didn't seem to be economical, so we let it go… 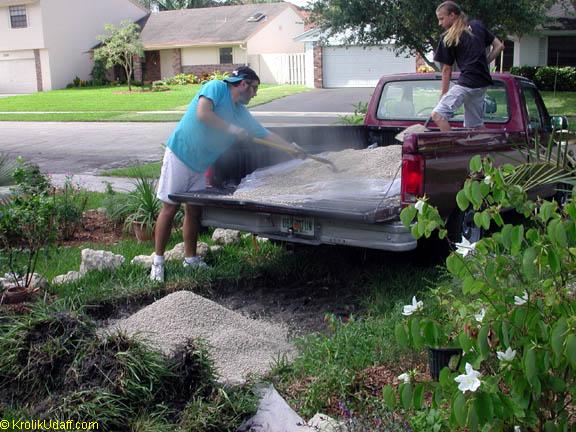 The gravel, compost, and the sand were bought at the place where the price is "per scoop": a giant excavator-like machine takes the scoop, and then dumps it in your truck…

The hole was filled in with gravel up to ground level. 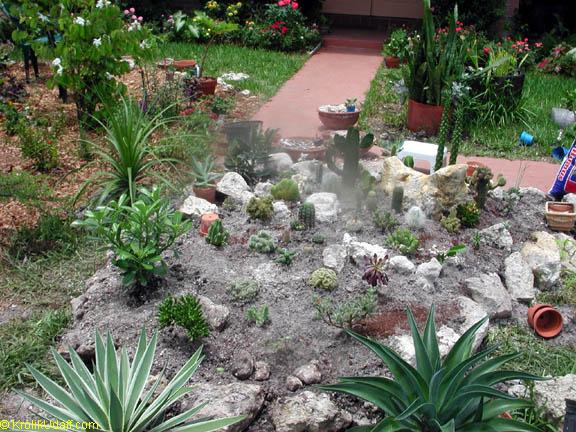 Then, on top of the gravel, we added a mixture of sand and compost, to create a hill-like appearance. The border was made out of giant rocks (lime stone) that we have taken from the construction site we've mentioned.

On the surface of the hill, we made little holes for planting cacti. The cacti were planted in the mixture of sand, compost, peat moss, and few granules of slow-release fertilizer. 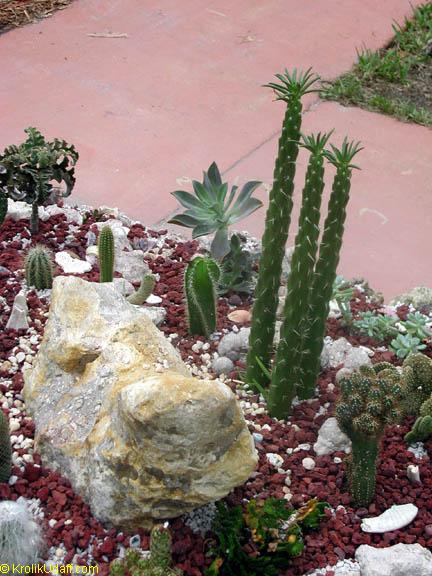 After all the cacti were planted, another thin layer of gravel was added just to make it look nice, and afterwards, we spread small lava rocks in some places to brighten it up.

In front of the bed, we planted agaves (not the kind that they derive tequila from, that must be blue agave). Agaves can grow just in regular soil with regular irrigation.

On the left of the pic. you can see Beaucarnea Recurvata - Ponytail Palm. Its top looks like pony tail, indeed - although it's not a palm tree, rather a succulent. This slow-grower saves water in its bottle-like stem. 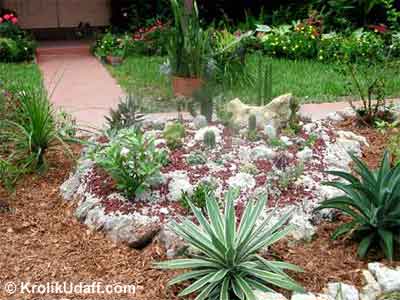 It was raining cats and dogs for whole month. Once you made a small hole in the soil, it momentarily was filled with water. However, the cacti hill seemed to be OK - the soil was damp, but not soggy. Cacti survived without dying or rotting. Many creatures such as geckos, butterflies, bees have inhabited the cacti hill… One of our cats (outdoor one) named Musya gracefully walks through the cacti bed without harming either cacti, or herself. 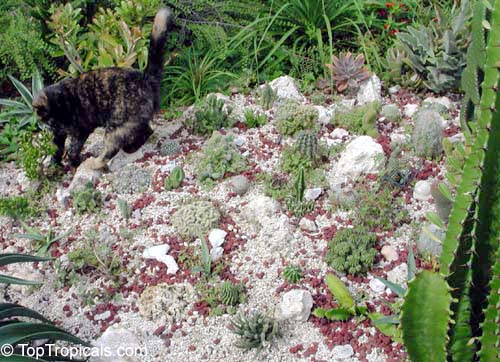 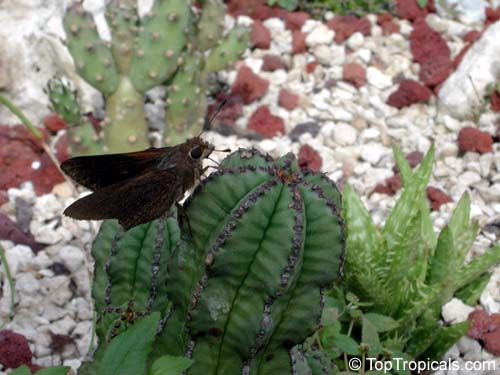 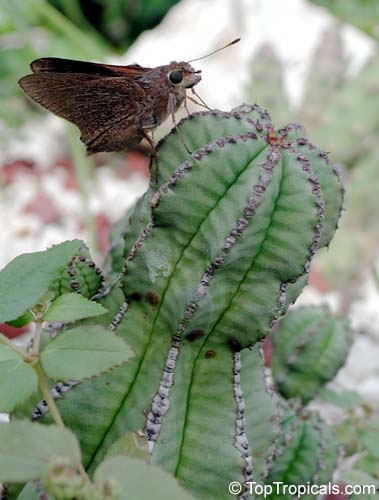 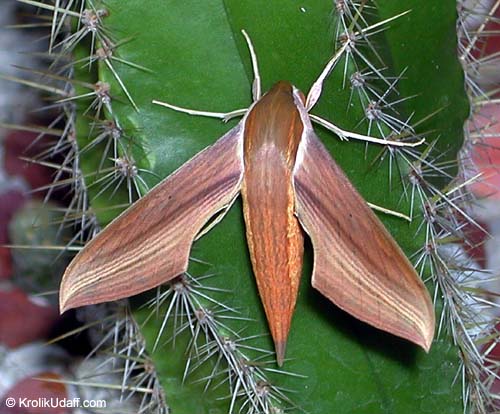 Here is how the Cacti Hill looks today (after a few months). Everything grows like crazy. 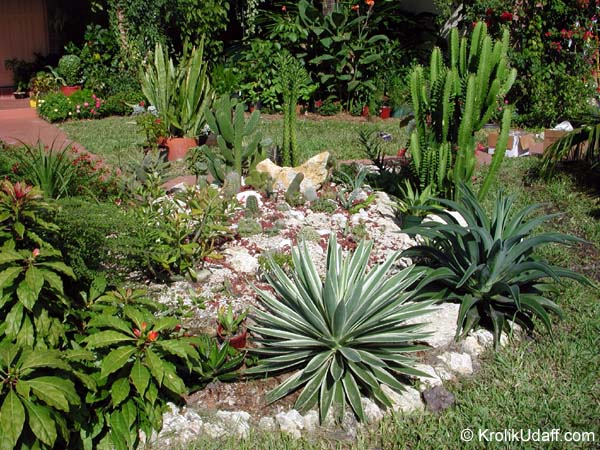 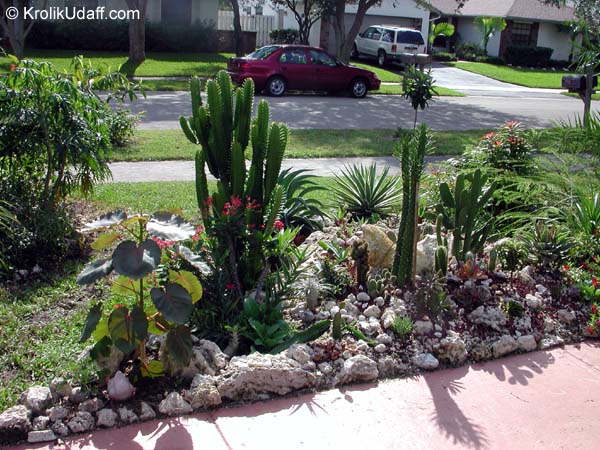 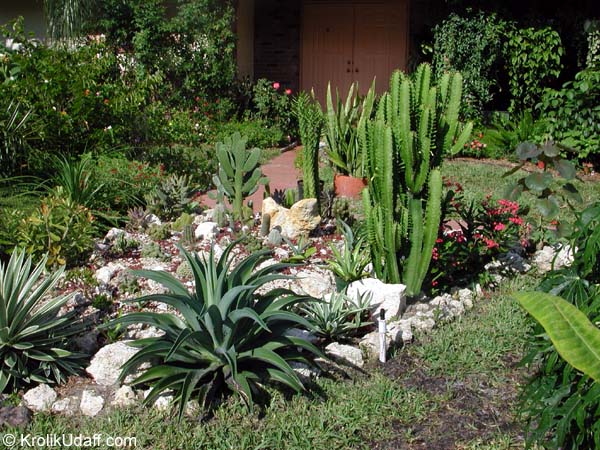 Kalanchoe is spreading its babies around 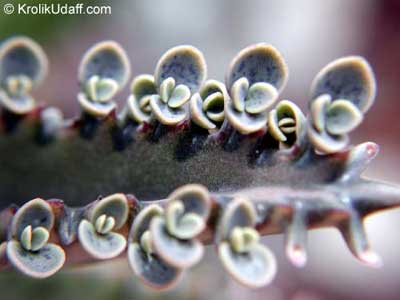 The "Cacti Alps" experiment has turned out to be a successful method of growing cacti in South Florida, surely it must work for other places too. While those who live in Arizona or Texas don't need any cacti hill (they can plant cacti directly in their backyard), others might find our experience useful. Remember that cacti can survive in relatively cool climates, as long as they are not over-watered… which can be prevented by the method described above.

Special thanks to Pauk, for he has showed immense courage during the construction process. He was promised that a plaque with his name on it will be set up on the cacti mound.