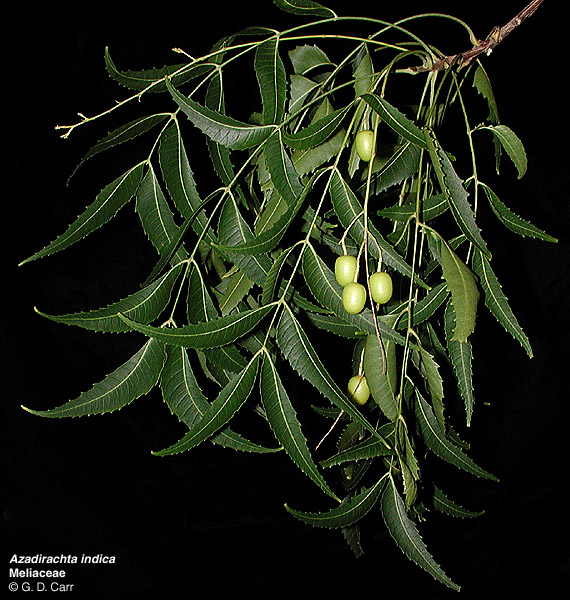 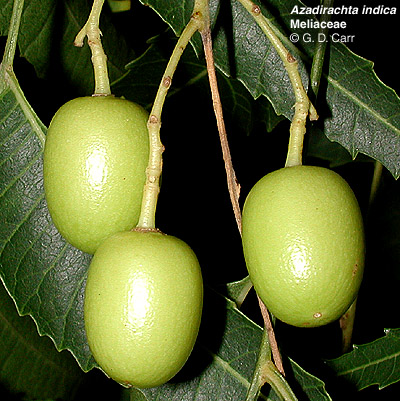 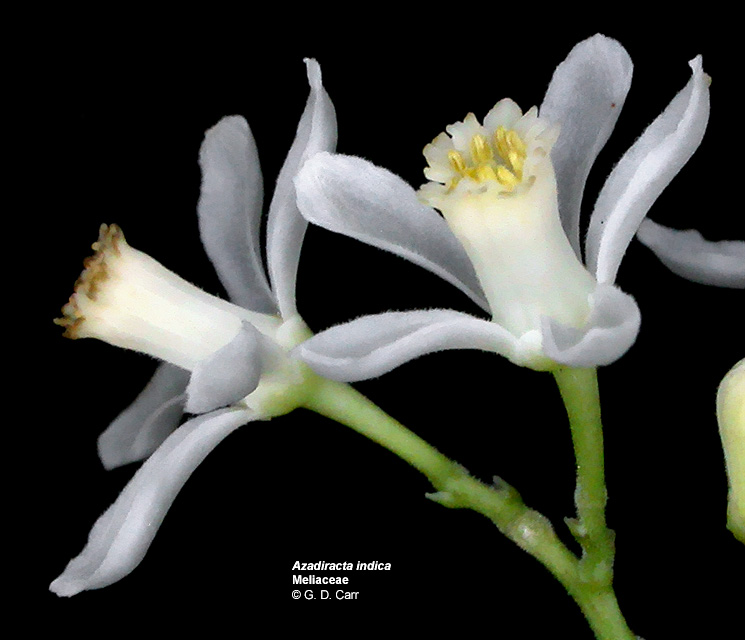 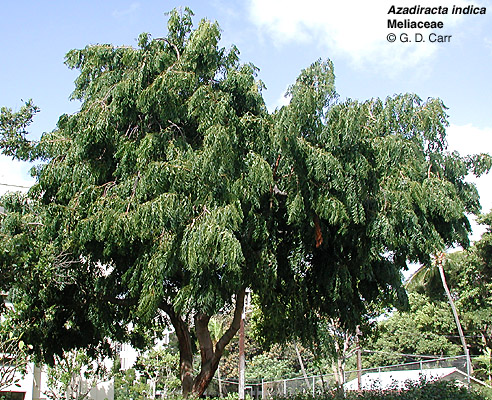 Azadirachta is from the Persian name of Melia azedarach, to which the Nim is allied. Indica means Indian.

Familiar to most people for its medicinal properties the Nim is recognised by few, in spite of its distinctive leaves and annual profusion of sweet-scented flowers. It is a medium-sized or large tree with a straight trunk, elegant in form and evergreen.

The flowers, which appear from March to May, are tiny stars borne in great number on long, drooping stems which spring from the axils of the leaves. The five whitish petals surround a yellow funnel which contains the stamens and the style.

Bees and other insects are attracted by the pollen and buzzing swarms can usually be seen hovering round the tree all through the flowering season.

The long, pendent leaves, crowded near the end of the branches, bear up to twenty-nine or thirty-one curiously shaped leaflets. Each about 3 inches long, they are deeply serrated, sharply pointed and curved like a scythe. Their fresh, green color and shining surface give the tree a delicate and charming appearance and during the monsoon when the flowers have fallen and the tree is in full foliage, the curved, toothed leaves, massed round the branches, have a distinctive appearance easy to recognise.

Young leaves are a pale, tender green, tinted with rust. These are eaten on the Hindu's New Year's Day to ward off sickness during the coming year. Hindus, to whom the tree is sacred, also festoon fresh leaves across their houses when there is an epidemic of small-pox. Some trees bear sweet leaves and some bitter and it is the latter which are used in curries. Dried leaves (in a bag or envelope for convenience) put in drawers and cupboards keep out moths, cockroaches, etc. Another use for these "magic" leaves is in poultice form when they are employed to heal festered wounds. 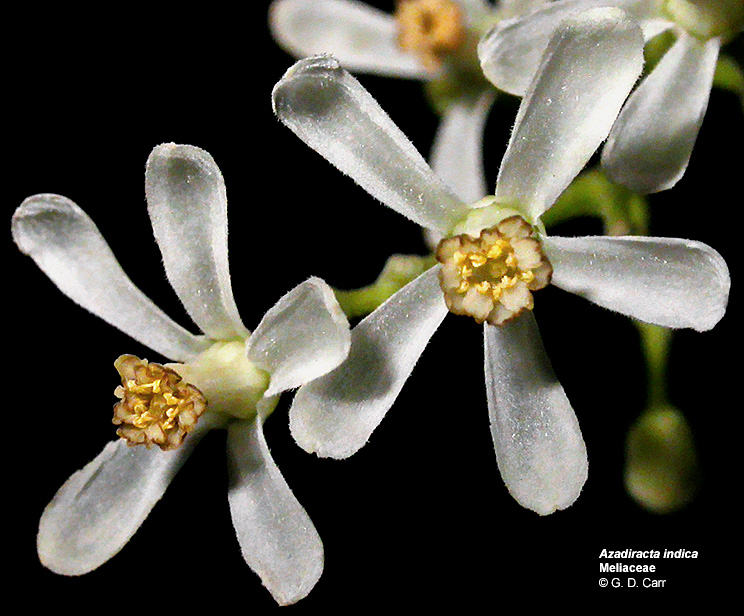 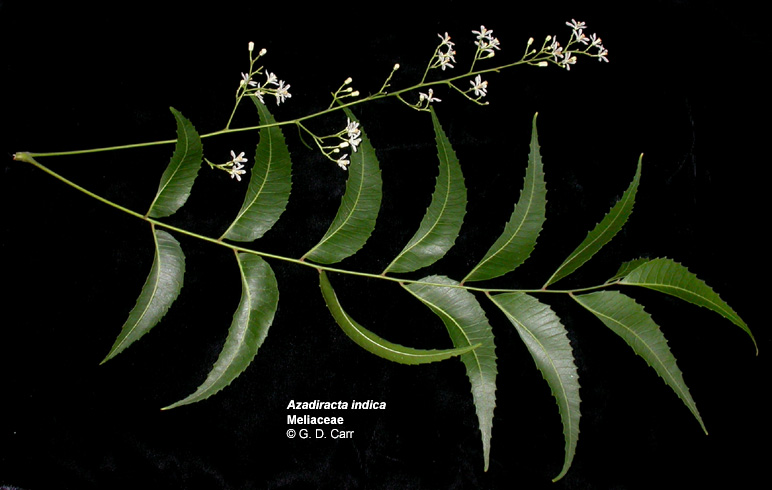 From the yellow or purple fruit, the size of a small olive, is obtained the famous Margosa oil which is so effective in the treatment of leprosy and skin diseases. Leaves and fruit are both vermifugal and the latter is used as a purgative. External application of oil from the seeds is believed to cure rheumatism and it also has antiseptic properties. Bark and gum yield valuable medicines, in fact practically every part of this fine tree is of value. There is a legend concerning the powerful medicinal attributes of the Nim. A woman, whose husband was about to set out on a voyage, wished to ensure his early return. She consulted a medical man who told her she must advise her husband to sleep under a Tamarind tree every night of the outward journey and under a Nim tree every night of the homeward journey. This he agreed to do. The Tamarind is reputed to exude unhealthy, acid vapours so, before many days, the unfortunate man found himself too sick to continue his travels. He turned back and the healing power of the Nim trees under which he then slept each night, worked to such effect that by the time he reached home his sickness was cured.

Nim timber somewhat resembles mahogany. It is beautifully mottled, hard and heavy. Wood from old trees is so bitter that no insects will attack it.

Neem has been widely valued for over 4000 years as a medicine in South Asia. Every part of it is used particularly to treat infections, skin conditions and reduce swellings. It is also used as a pesticide to protect food and other products from being eaten by insects and in cosmetics. Neem is often the subject of scientific experiments.

Leaves, bark, twigs and the oil from the seeds have antimicrobial activity and can be applied to swellings and boils. One of the Sanskrit names for neem is 'pichumarda'. The word 'pichu' means leprosy, so its name reflects the use of its seed oil as a treatment for leprosy and other skin diseases. The oil was also used to massage people with swelling of the joints caused by arthritis. In India the twigs are sold in markets as tooth picks and chew sticks where they are believed to help clean teeth and kill bacteria.

Neem bark has been used to treat a variety of conditions. Extracts of the bark and twigs have been used to treat fevers, thirst, sickness and vomiting. Fever is a symptom of many diseases including malaria. When neem was used to treat malaria it was often mixed with coriander and ginger. This mixture was believed to be more efficient than quinine, a compound from a South American tree that is a well-known treatment for malaria. The bark has also been used to prepare various medicines to treat jaundice, anorexia, dysentery and worms.

The leaves have been prescribed to aid the digestive system and to stimulate the liver. Infusions of the leaves were also used to treat lung conditions and to decrease levels of glucose in the blood of patients suffering from diabetes. 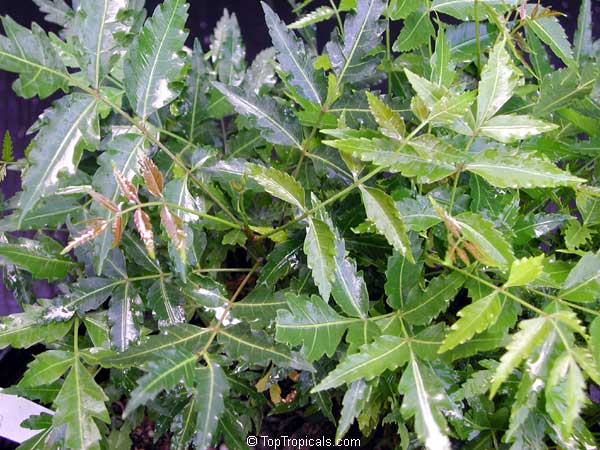