In the spring of 2005, a friend and I spent a weekend in Everglades National Park. We went all the way  down to the very southern tip of the Florida peninsula to the area called Flamingo. Not wishing to endure a couple of nights of very large, brave, almost bird-sized salt-water mosquitos by staying in the campground, we opted to rent a cute little cabin right at the edge of Florida Bay. The abundant wildlife was amazing, and included a giant flock of white pelicans (the most I have ever seen at one time), a pair of bald eagles in a gigantic nest built in a huge mangrove tree overhanging the bay, and even a couple of very rare Florida crocodiles! Also, there were lots of beautifully flowering native orchids growing on the buttonwood trees all along the coastal prairie trail...

However, the most impressive plant-life for me was a single native tree growing near a parking area along the Bay. It was the largest, oldest, "Shortleaf fig" I have ever seen.  It was growing on a mass of bare exposed karst limestone and bore a small plaque describing it as being the largest Ficus citrifolia in the National Park. As it was dropping some of its little fruits at the time, I ended up taking a couple home for cultivation. 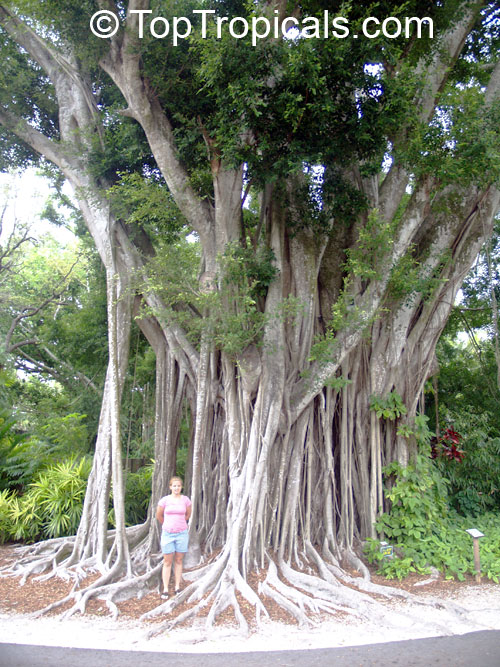 There are only two species of Ficus which are actually native to the United States. One is commonly seen all across the central and southern parts of Florida and is know as the "strangler fig". It is a familiar sight, often found engulfing cabbage palms, telephone poles, and even old abandoned buildings with its network of aerial roots which eventually support it.  However, the shortleaf fig, or wild banyan as it is also known, is a relatively rare Florida native, generally being found in habitat only in the southern-most part of the state. In-fact, personally I have never found it growing north the the route 41 Tamiami Trail as it crosses the Everglades. It seems to mostly grow naturally on exposed limestone outcrops which occur only that far south. It is also found across the Caribbean islands whereever exposed limestone is found. I recently found out that the island of Barbados is actually named for the vernacular name for the tree there, which is "os barbados" or "the bearded" in Portuguese (perhaps because of the abundant young, hanging aerial roots?). 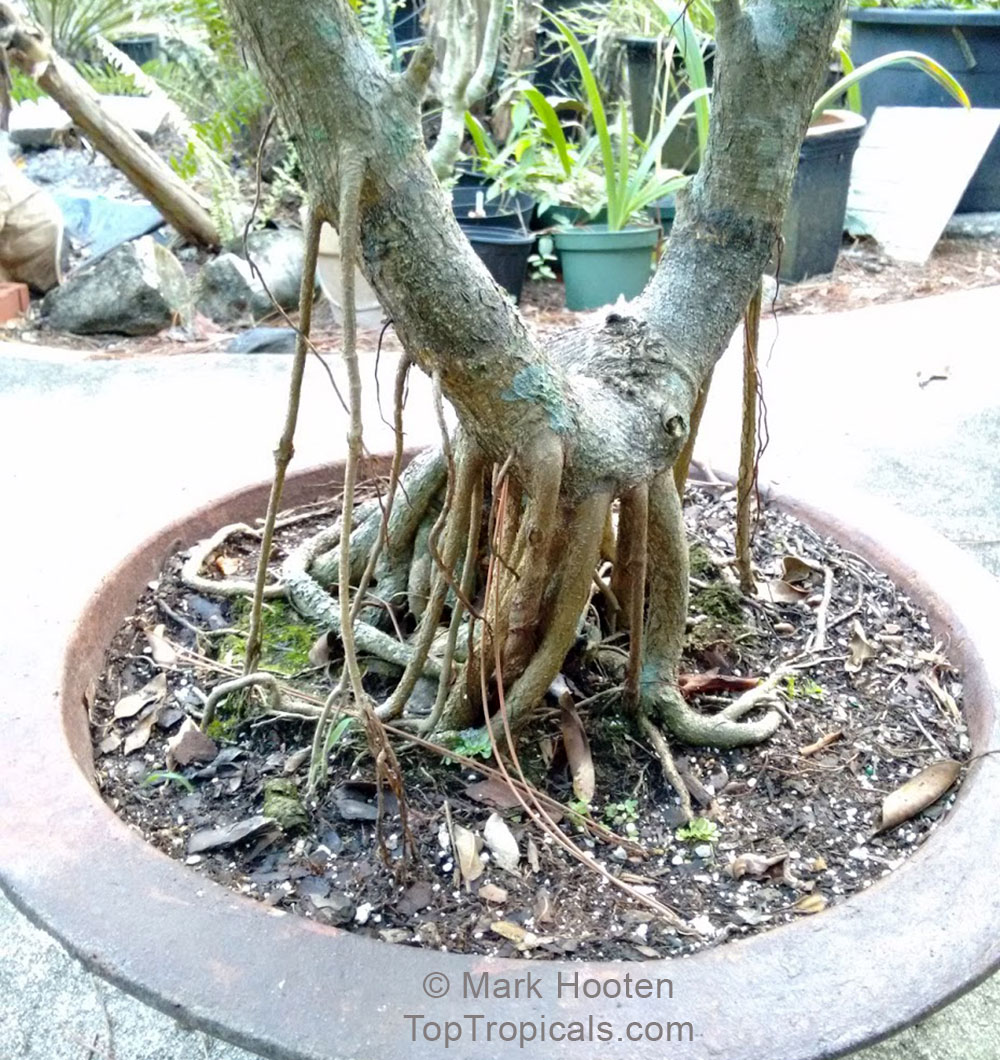 Unlike its ubiquitous strangling relative, from a horticultural perspective, the Wild Banyan is a much smaller, tamer, and significantly more attractive tree. Mature trees are often less than twenty feet tall, with a naturally rounded crown. They hold dense, compact, canopies of small, shiny, deep green leaves creating a very pleasing appearance. Also, I personally find the network of adventitious aerial roots toward the base to be decidedly sculpturally attractive. Also, apparently the state of Florida recognizes this as a "keystone" species, because so very many kinds of birds (even hummingbirds) feed from their tiny black figs.  And while this species makes a beautiful landscape specimen, it also creates a great potted specimen. Because they are such tough little trees, I would bet dollars to doughnuts that they would also make great houseplants in bright places. Perhaps because of their normally rocky habitats, they also seem to endure occasional under-watering much better than the more commonly cultivated potted Ficus species which will drop many of their leaves under such stress. 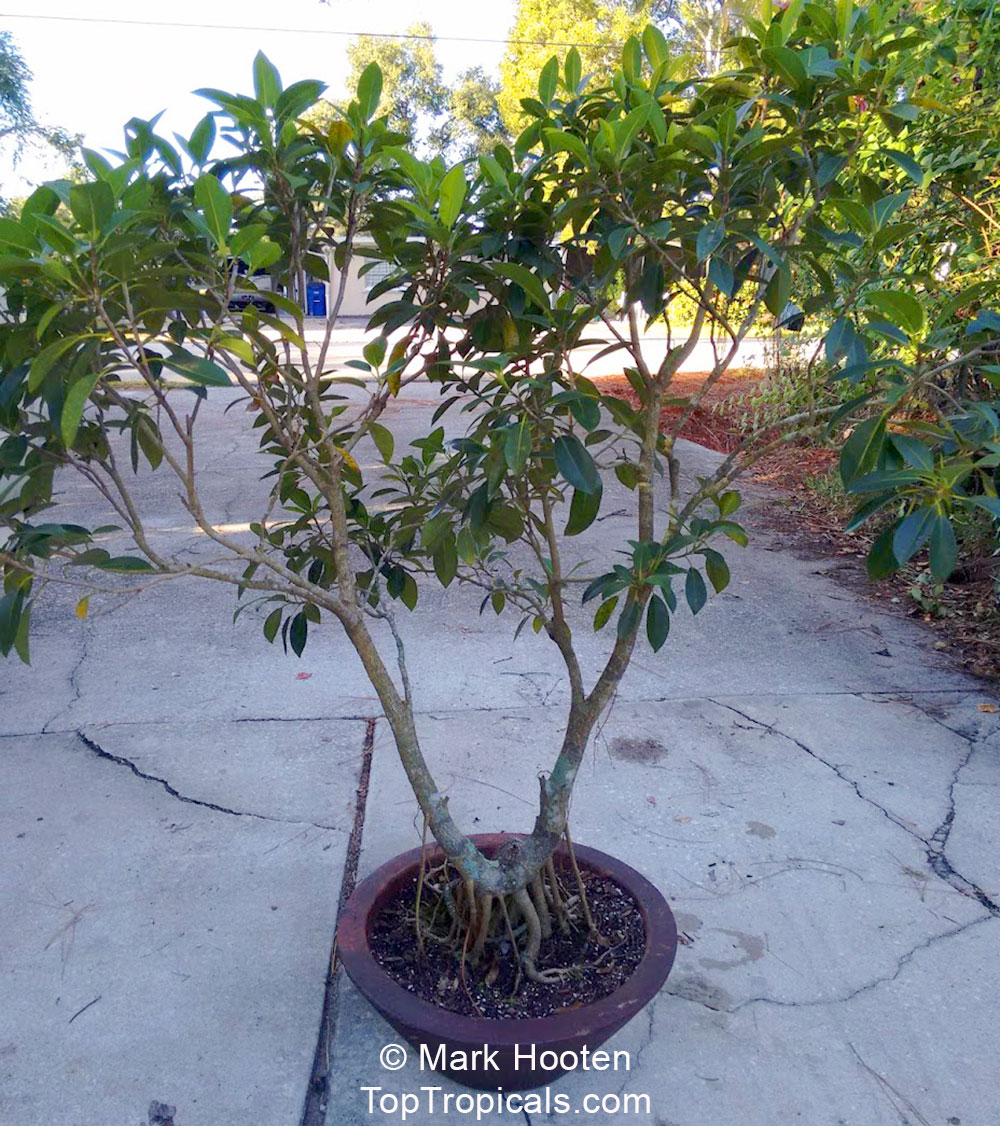 Unfortunately, just a few months after I visited Flamingo, the most powerful hurricane ever recorded in the Atlantic Basin, Hurricane Wilma, happened to cross the very bottom of the state. (This is the hurricane that leveled Top Tropicals nursey in Ft Lauderdale, and we rebuilt our facility in 1 month!!! - editor's comments).
The powerful winds of the storm drove the waters of Florida Bay to a height of many feet, completely inundating the area, destroying the campground, hotel, cabins, and bait shop, along with removing whole sections of coastline and the ancient mangrove trees. When I re-visited the area a couple of years later, it was hard to tell what had been where. Sadly, that magnificent Ficus citrifolia tree was gone, and somehow the limestone boulders upon which it had been growing appeared to have been re-arranged. Actual remnants of dried seaweed were still hanging from a few remaining mangrove branches over 8 feet above my head!

However, I have been cultivating one of its seedlings now for 14 years, having kept it as a large potted bonsai specimen as depicted in a couple of accompanying images.  The last time I gave it a bit of a pruning, I propagated it, and now we have a few of them to offer to plant-lovers! They are already attractive, vigorous little trees. It would be very nice to see them more widely cultivated, they deserve to be more appreciated!