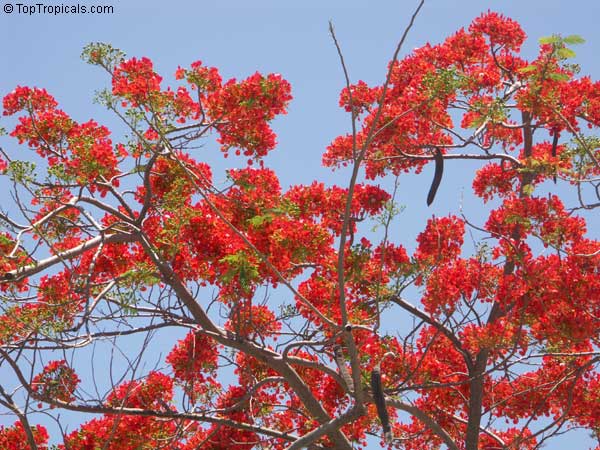 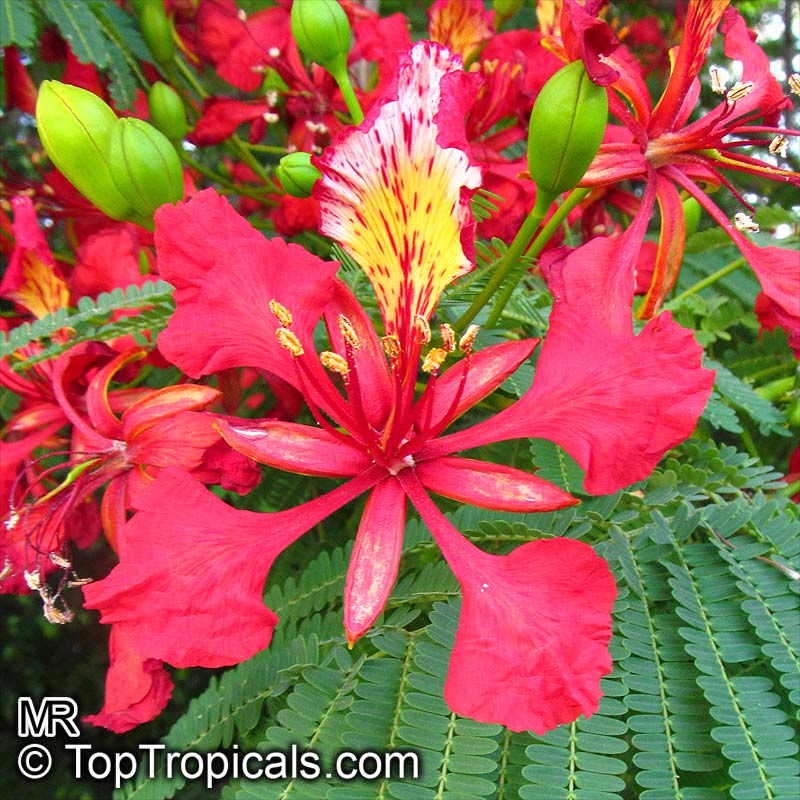 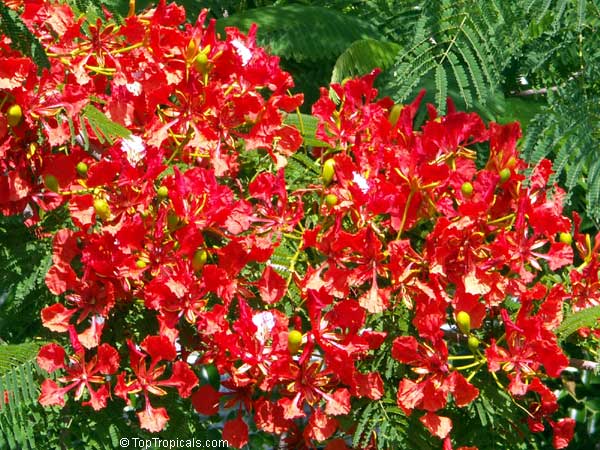 The Flamboyant is one of the most striking ornamental trees and each April one cannot help but wonder how a bare, gaunt tree, standing in dry, hard earth can produce such a wealth of glorious bloom. Within a week of the first blossom appearing, the whole tree is sparkling with vivid splashes of crimson and orange. 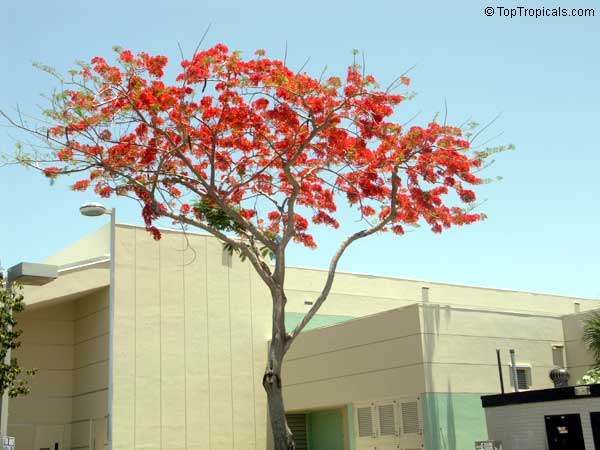 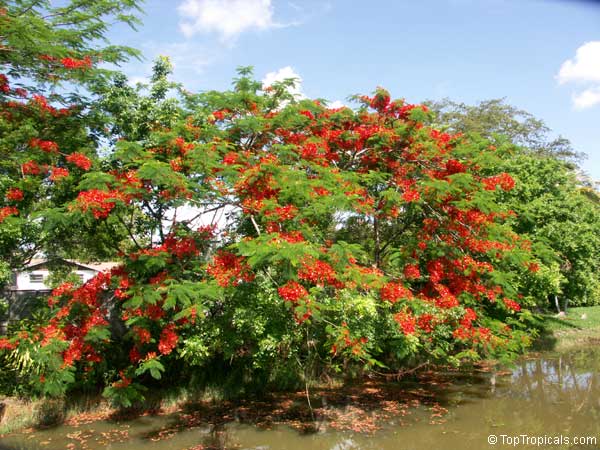 In May the pale, rich green of the new foliage unfolds and the tree develops a feathery grace. Bare, grey branches and long, ugly, black pods are all hidden and the spreading canopy of green lace and scarlet blossoms is at its loveliest. There is a wealth of variety in the shades of crimson and scarlet, some being almost orange and others a deep, deep red. Each have their admirers. 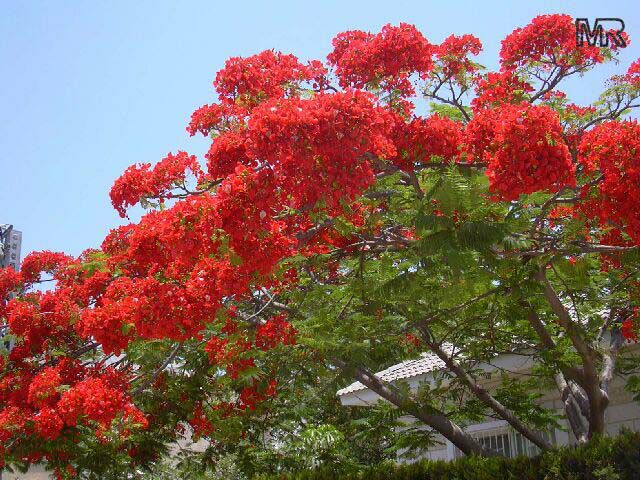 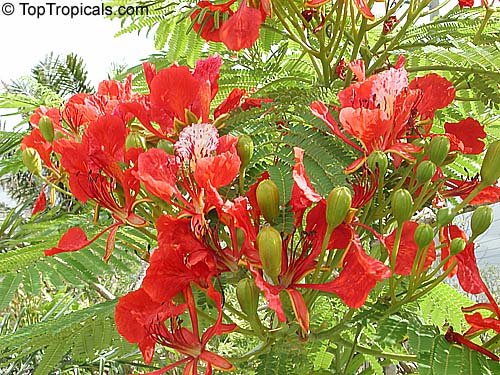 The large flower-sprays bear numerous, intermingling blooms and roundish, nodding buds. Individually each flower will be seen to be about 5 inches across. Five thick, crimson sepals curve back to display their lime-green lining and bright yellow rims. From the spaces between them, radiate the five spoon-shaped, wavy and crinkle-edged petals; one of them is larger, its white or yellow centre streaked and splashed with scarlet. Ten long stamens spread and curve from the centre. After the fall of the flowers the soft, green pods make their appearance; soon they become hard and black - long ugly tubes hanging amongst the leaves. They remain there throughout the season - even until the flowers of the following year appear. 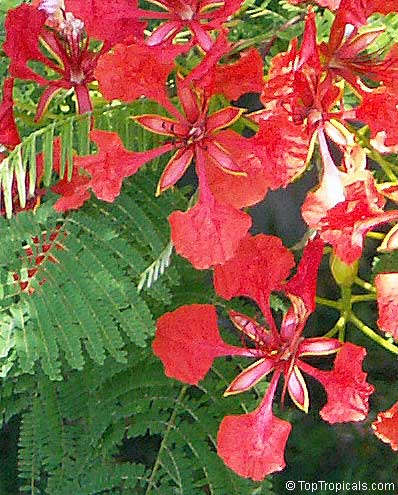 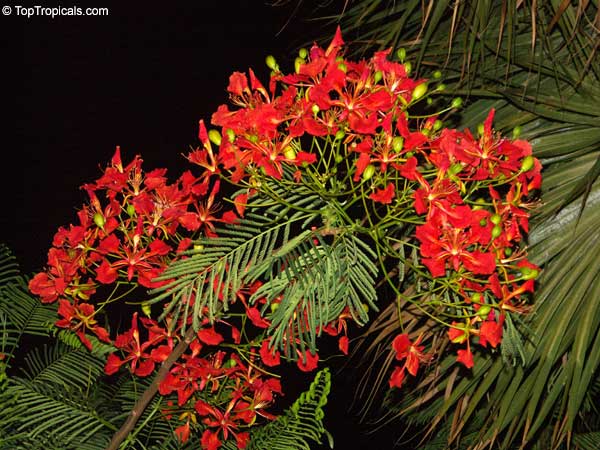 The long bipinnate leaves are not unlike those of several other trees—each pinna bearing from twenty to thirty tiny oblong leaves, giving a graceful, feathery aspect to the tree. Even when the tree is flowerless it can easily be recognised by the smooth, grey limbs and the characteristic formation of outward spreading branches and leaves. There is no depth to the foliage; from below there seems to be but one layer of leaves - an umbrella of lace. 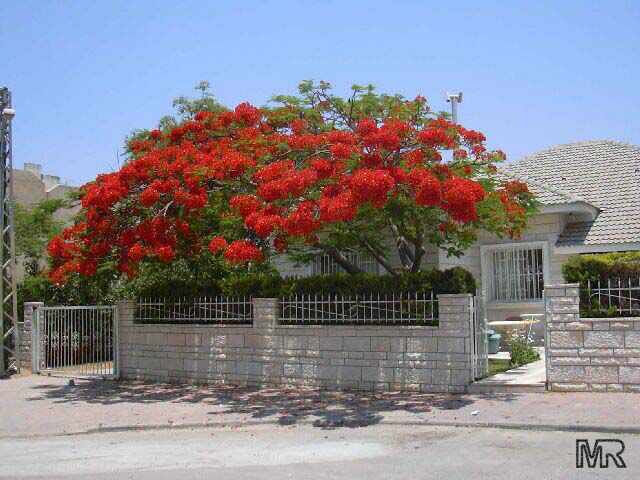 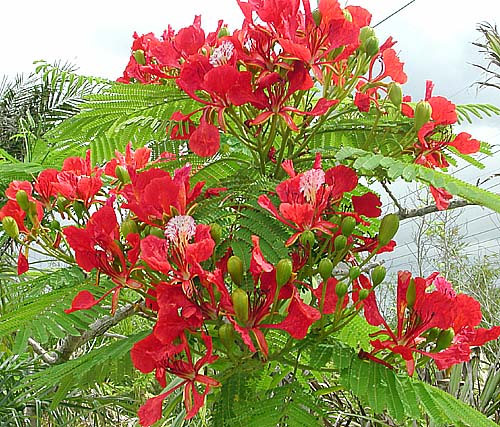 Delonix makes an excellent light-shade tree and is frequently planted in avenues, where, if every tree is about the same height, they form a splendid vista. During the first weeks of flowering such an avenue is a joy to behold, but after some weeks we turn our eyes in relief to the softer pastel shades of the Queens Tree and the Jacaranda. The strident scarlet has begun to pall!

There is some controversy over the meaning of the name of this popular tree. There are those who say the word is Mohr, meaning " peacock," while Gul is a flower. Others claim that the word is Mohur, a coin. But it is generally agreed that the name Gold Mohur is incorrect. Perhaps the most attractive of its names are those given by the French—Fleur de Paradis and Flamboyant. The botanical apellation is in honour of M. de Poinci, 17th Century Governor of the Antilles, from where the plant was first brought. Now it is to be found in most tropical countries. 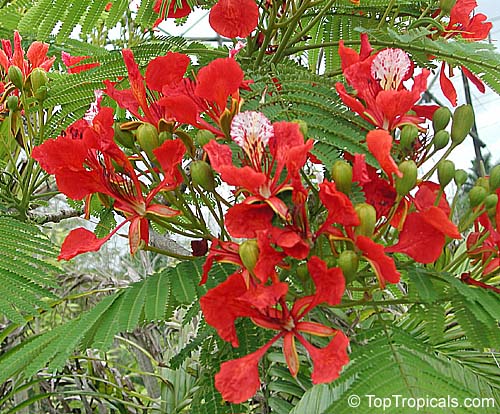