History and uses in different countries 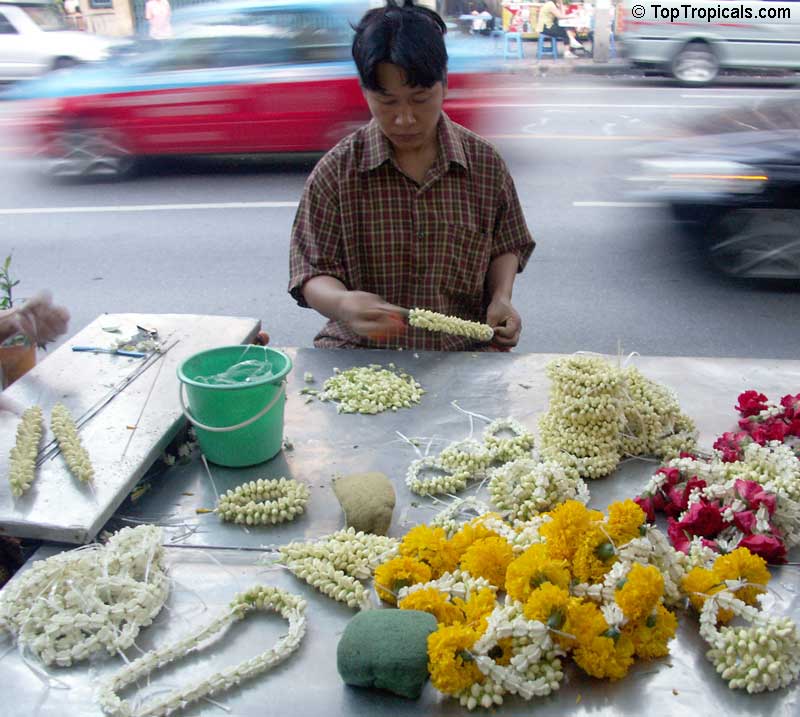 Some botanists now agree that the plant originated from India -- from the northern parts of the Himalayan valleys, although it is grown throughout India today. Others place the origins of the sampaguita even farther off to Egypt and Persia or present-day Iran.

Since ancient times Jasmine has been thought of as the 'queen of flowers'. The name Jasmine is derived from the Persia 'yasmin', meaning a fragrant flower. It's also a Persian girl name.

Plant must have been introduced into Egypt prior to the time of the XXI dynasty (around 1000 BC).

It was said that a Chinese emperor of the Sung dynasty (960-1279 AD) had Jasmine in his palace grounds so he could enjoy its fragrance. In the 1400s, Jasmine was planted for kings of Afghanistan, Nepal and Persia.

Varieties of Jasmine used in perfume, found their way to places across the seas -- beginning from areas along the Arabian Sea, such as Persia and India then crossing the Red Sea into Egypt. They reached into the territory around the Aegean Sea into Turkey and Greece. And, they spread to areas along the Mediterranean Sea from Africa through Egypt, Algeria and Morocco -- reaching Western Europe through Spain by Moors in 1600, and France and Italy.

The plant was introduced into Britain in the latter part of the 17th century.

Jasmine sambac ("Maid of Orleand" single variety), sampaguita, is the national flower of Phillipines. It is a symbol of purity, simplicity, humility and strangth.

Referring to famous Swedish botanist Linnaeus, he wrote that the natives of India used the young leaves and flowers to make a putty, which was mixed and eaten with rice to dry scabies and other skin eruptions. 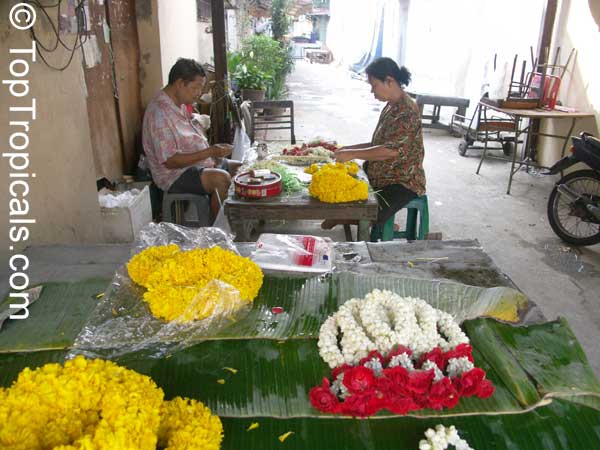 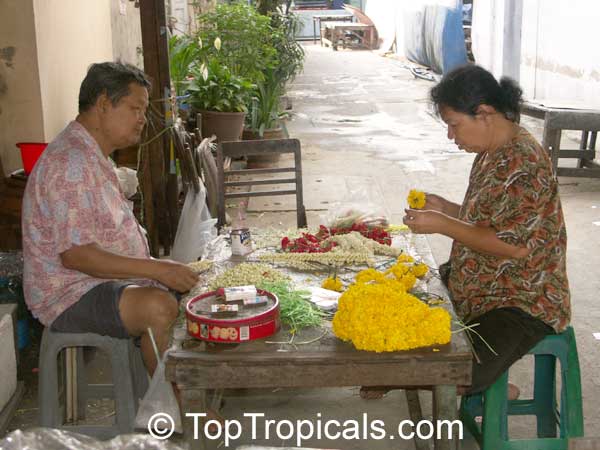 In India some varieties are used as religious offerings symbolizing divine hope. The Hindus string the flowers together as neck garlands for honoured guests. The flowers of one of the double varieties ("Belle of India") are held sacred to Vishnu and are used as votive offerings in Hindu religious ceremonies.

Pictures: Left - many Indian women wear garlands of Jasmine flowers in their hair. This woman was stringing some garlands in a market. 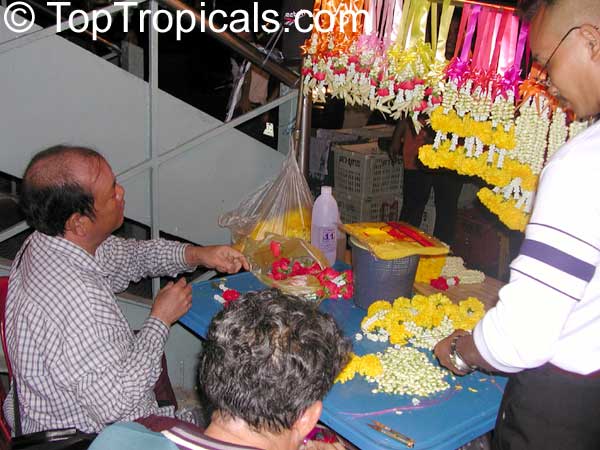 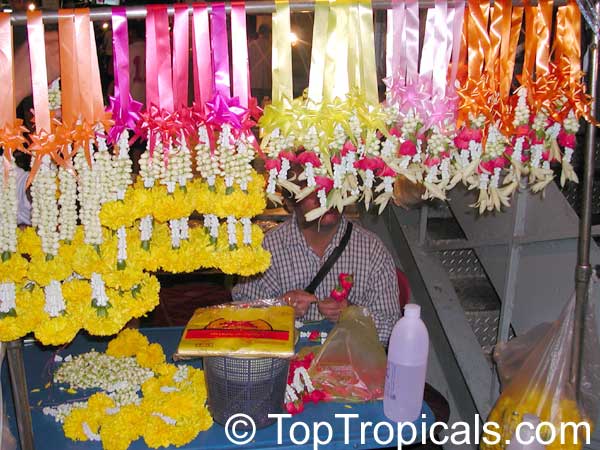 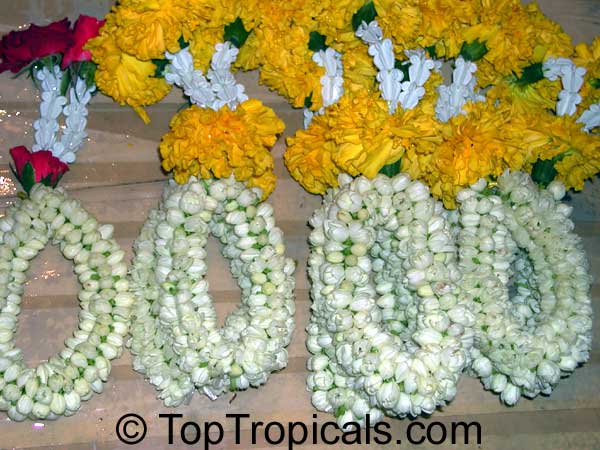 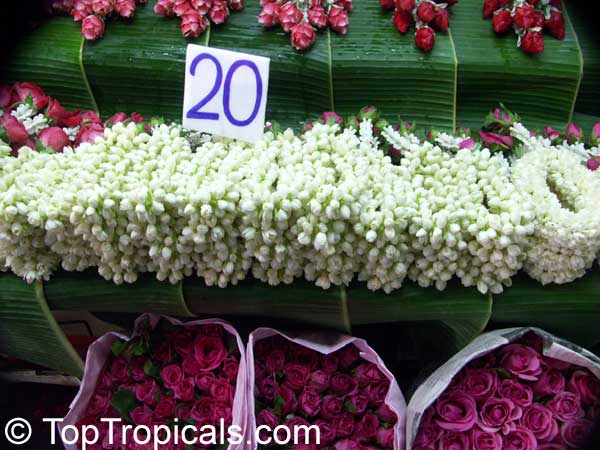 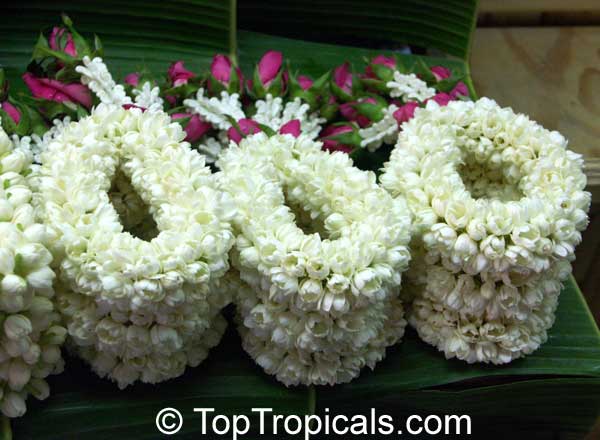 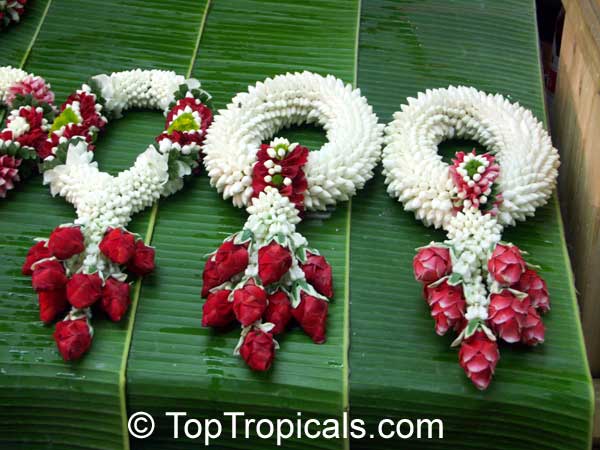 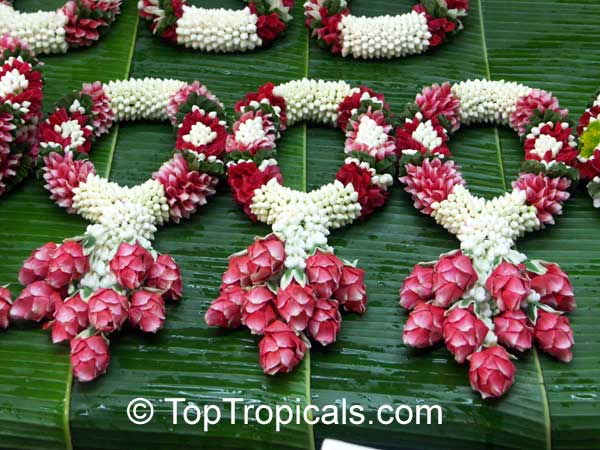 The variety Jasminium sambac, is a clustered flower of equally strong scent known in Hawai'i as the "Pikake". It was a favorite of Princess Kaiulani who was also very fond of Peacocks, thus the name of the flower pronounced as pea-cock-kay".

Jasmine sambac is one of Indonesia national flowers. It is used in Indonesia as a popular garnish. The existence of the Jasmine flower is described comprehensively in the script called Siwaratrikalpa (old Javanese literature) composed around XV AD when Adi Suprabawa governed the Majapahit kingdom, East Java. This flower was called "menur" in this script. It also stated that Jasmine has already existed in Indonesia since XV AD and this is a good flower to worship Ciwa in the new moon of the seventh month or the month of Magha. This is the holy night to worship Ciwa to wipe out one's sin. Magha comes once a year or every 420 days according to the Balinese calendar. The Ciwa worshippers use Jasmine flowers in their offerings. It is believed that this flower brings forgiveness and blessing and eventually they will be able to be united with Ciwa in heaven.

The Jasmine flower is called by different names in Indonesia or Bali - menur, melur, menuh, melati and melate. In Javanese weddings, this flower is commonly used for hair and dagger decorations for the bride and the groom. On the contrary it is not used in Balinese weddings. In Bali other flowers are used for the wedding such as the yellow and white Champak flower including Kenanga. The Jasmine flower can also be used to cure fevers as well as to flavor tea or to make perfume. In Bali people plant this in themain temples or the family temples. Jasmine is a good flower to use as a medium of praying to worship the god Iswara. The color of this god is white and located in the east. This flower is also used for the big ceremonies such as Tawur Agung - the ceremony to bless the whole world.

In Borneo it is the custom among the women to roll up Jasmine blossoms in their well-oiled hair at night. 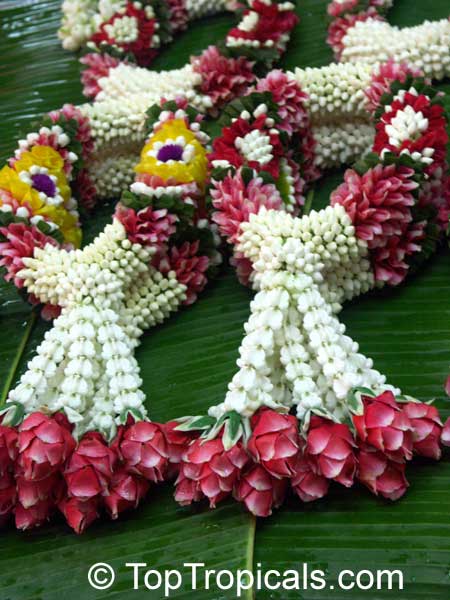 Jasmine tea and other culinary uses 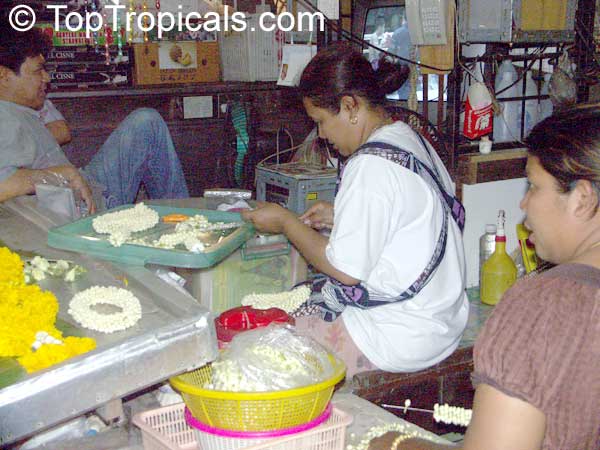 Jasmine tea has been made since ancient times and is said to have spiritual powers. This tea is cleverly made by resting the tea leaves strategically beside the powerfully scented Jasmine flowers. The scent is then used in the leaves capturing its essence to create an aromatic affair. In Asia the flowers are used to scent not only teas but desserts as well.

The scenting technique of the green tea belongs to Chinese Sung dynasty of the 13th century and consists in blending a few leaves of non-fermented tea with Jasmine flowers for some hours at night, when they release their essential oils.

Jasmine chocolate of the Grand Duke of Tuscany

Layer the Jasmine and the cocoa. Leave for 24 hours, then mix and add more layers. Repeat 10 times. Add the remaining ingredients and grind together.

The Chinese, Arabians and Indians used Jasmine medicinally, as an aphrodisiac and for ceremonial purposes. The root is used in China to treat headaches, insomnia, and pain due to dislocated joints and broken bones; it is reported to have anaesthetic properties..Several Jasminium species have been used in cancers

Jasmine essential oil has a sweet, exotic and rich floral smell and the oil is deep orange-brown in color. Jasmine small white star-shaped flowers picked at night when the aroma is most intense.

The yield of flowers per hectare in 6000 lb in sambac (about 200 g/bush). Since the Jasmine flowers are highly perishable and have to be disposed off in the market within few hours after picking. An experienced picker can pick 10,000-15,000 blossoms per day. France, Italy, Morocco, Egypt, China, Japan and Turkey produce the best oil. The oil from the sweet smelling Jasmine has been known to be one of the most expensive scents in the world costing upwards of $1,500-3,000 a pound. Today it is a billion dollar plus industry in France growing Jasmine and distilling its perfume.

In manufacturing, Jasmine oil is produced as a 'concrete' by solvent extraction, and an absolute is obtained from the concrete by separation with alcohol, and an essential oil is produced off the absolute by steam distillation. 1,000 lb of flowers (about 4 mln flowers) yield approximately one pound of liquid concrete, which yields 0.2% aromatic molecules. The main chemical components of Jasmine oil are: Benzyl, Nerol, Terpineol, Linalyl acetate, Methyl anthranilate, Jasmone and Farnesol.

Little bit of math. From one hectare 6 lb of luqid concrete can be produced, or 0.5 g of oil. Which is about 12 drop of Jasmine oil. Can you image that? 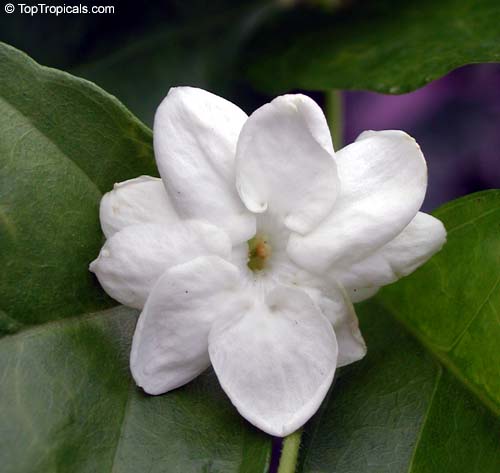 Jasmine sambac ("Maid of Orlean" variety) is the national flower of Phillipines - sampaguita. It is a symbol of purity, simplicity, humility and strength. Its blossom is celebrated in Philippine legends, stories and songs. In the Philippines, the sampaguita also has a number of names: sambac, sampagung, campopot, lumabi, kulatai, pongso, malur and manul.

In 1934 Governor-General Frank Murphy, moved by sentiment, named it a national symbol. "Sentiment has dictated the selection of national flowers either symbolical of certain national or sentiments, or reminiscent of some important historical or traditional events," Murphy explained in Proclamation Number 652. "France has her fleur-de-lis and Japan her cherry blossom," he said. "In the same way the Philippines should have her national flower."

On advice from the secretary of agriculture, Murphy concluded: "Considering its popularity, ornamental value, fragrance and the role it plays in the legends and traditions of the Filipino people, I hereby declare the sampaguita to be the national flower of the Philippine Islands. Done at the City of Manila, this first day of February, in the year of our Lord, nineteen hundred and thirty four."

Sampaguita, a Spanish term, comes from the Pilipino words "sumpa kita," which means "I promise you." It is a pledge of mutual love. In early days, a young couple exchanged sampaguita necklaces much like a bride and groom exchange wedding rings nowadays. To this day, garlands of sampaguita are offered to dignitaries and special guests.

Jasmine arrived in the Philippines in pre-recorded times, most likely as an item of barter or gift on board trade boats plying the South China Sea. In the Philippines a type of Jasmine called sampaga was described as early as 1698 when Ignacio Mercado, an Augustinian monk, first wrote about its medicinal use in the Declaracion de las virtudes de los arboles y plantas que estan en este libro. In translation, Mercado said that the leaves of the sampaga (which has bigger flowers than sampaguita) made a wonderful syrup to comfort the heart. The vapor was a good cure for asthma.

Our own use of Jasmin 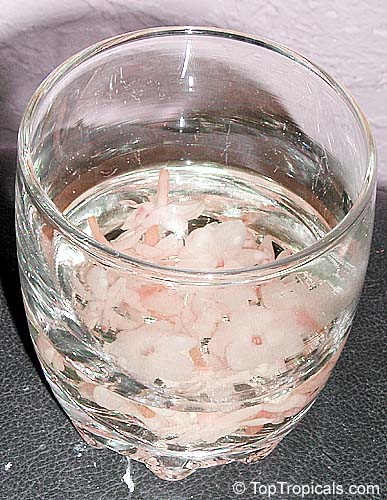 We make our own Jasmine tea. The best tea is made with Maid of Orleans (single flower) variety. We pick up fully open flowers and leave them in a cup with hot water for 15-30 min. The extract is added to tea or taken pure. Try it yourself. 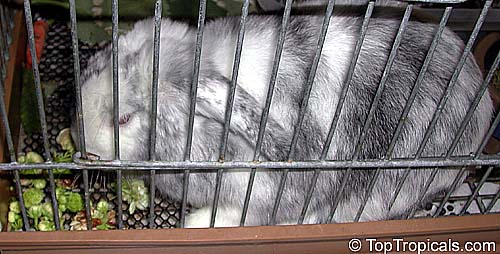 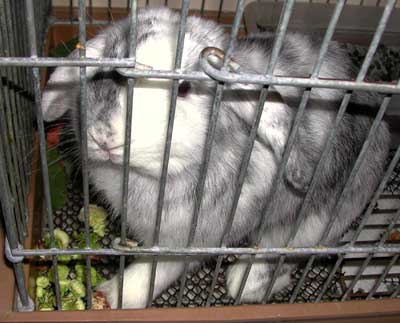 We found some unusual ways to use Jasmine flowers. When we prune our "Grand Duke", we use fully developed flowers to make a tea and feed buds to our rabbit. He loves it. Probably, he knows about numerous medical uses of Jasmine :) 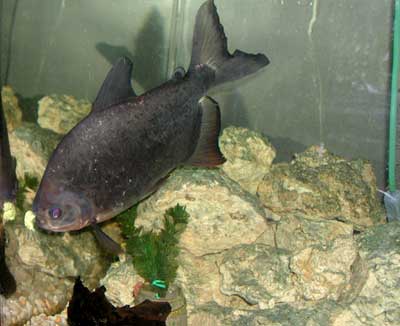