The story below about Little Raja is heart breaking and yet teaches us many lessons of life. Since the first columns about Raja and her brother Abu were published in our Blog, we have been getting many letters from gardeners-slash-cat-lovers asking questions about those heroic kitties... what have they been through and what happened after?.. So we asked Kristi to tell us the whole story in full. This is the second part of Raja's story and her lessons of Life (see part 1).

...I brought them home and explained to the family what was said by the doctor. The first dose of antibiotic was given that night. I sat watching them as they ate the pills waiting for the bipitty-bopitty-boo moment where they would suddenly stand up and start playing like normal kittens. While this did not happen, there was improvement. Every day there was improvement. In about a week we saw a change, as they began playing. 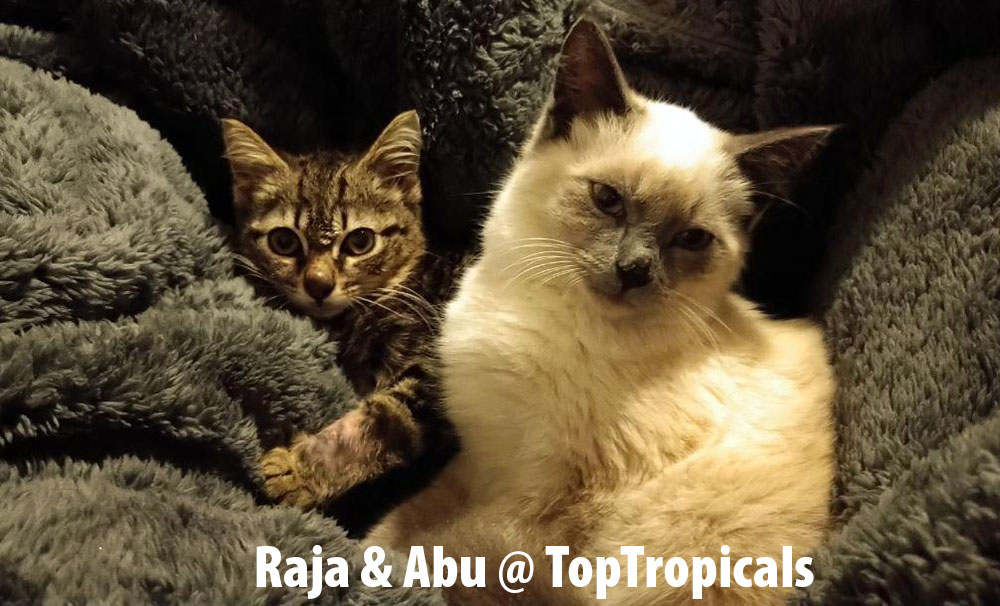 Raja developed a personality like no other. Nothing was too big for her to play with, and she had no idea what "disabled cat" meant. Over the weeks Raja got better and better. She became so sweet, following me around everywhere, earning herself the name Little Lamb. Two weeks later she was jumping on furniture and navigating her way on-to the bed. Worried she may hurt herself jumping down, Jamie and I went about making her access ramps so she could walk down them instead of jumping. Her reaction was a swift run up the ramp to the other side of the couch. Then with a large leap- and I'm pretty sure I heard her yell Y.O.L.O (you only live once) - she jumped off the couch anyway! 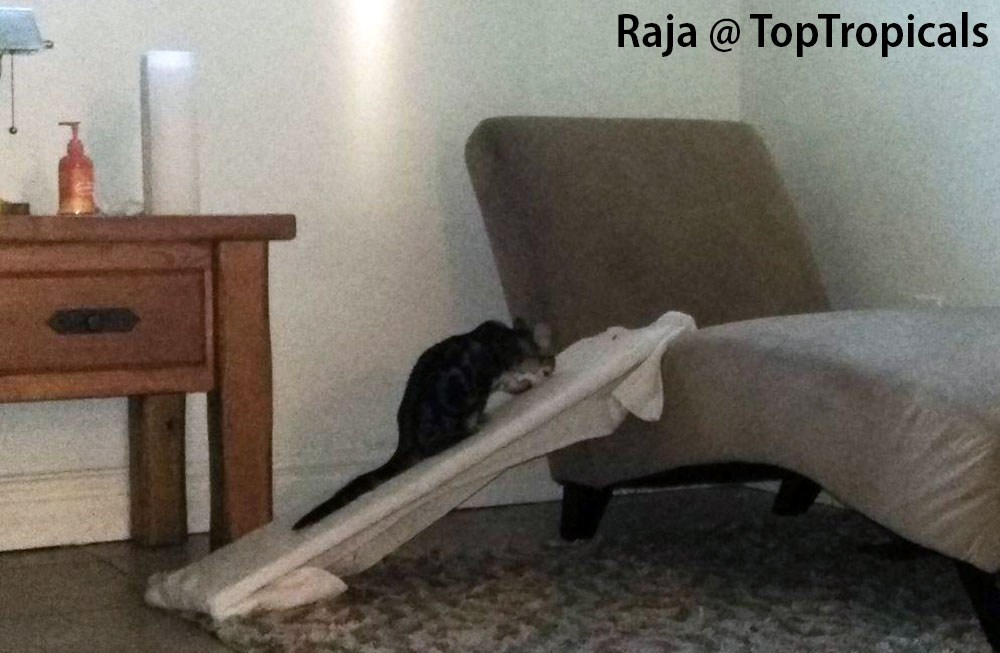 As the days passed we starting thinking everything was becoming more normal. The vet was so impressed with the results he finally took her off the antibiotics. The more time we spent with her, the more we could read her personality. She had a meow that sounded like a baby tiger and I thought to myself, funny how we named something the perfect name with out even knowing a-priori. The heart, fight, and meow of a little tiger! 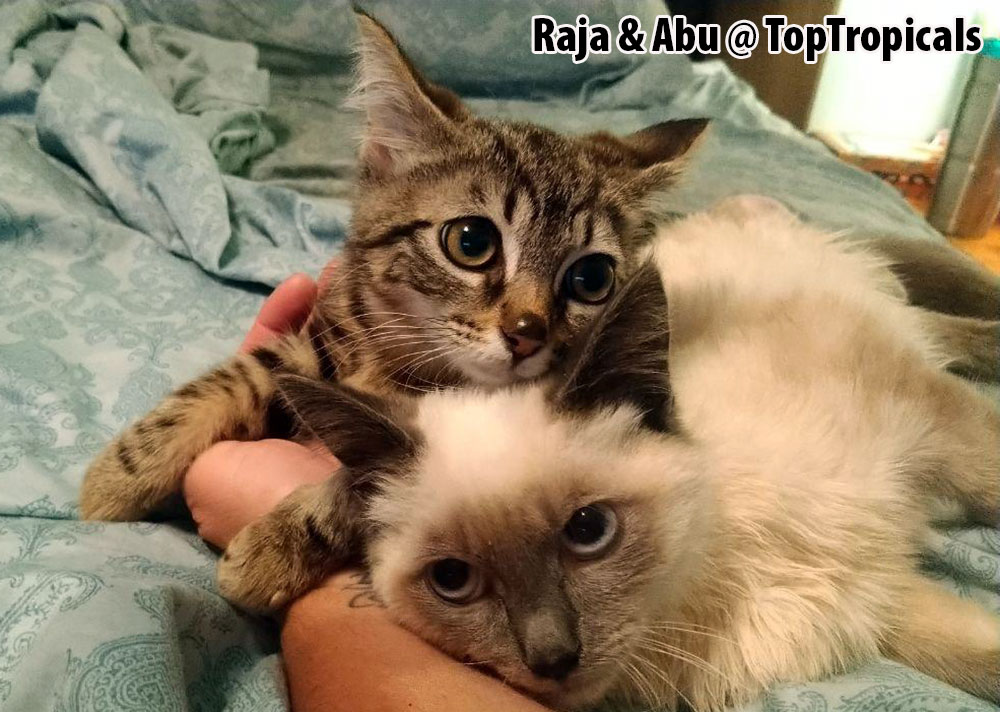 At the three week mark of being off the antibiotics, I woke up one morning looking for Raja. She was not in her usual spot next to me. As I made my way to the living room, Raja crept out from behind the couch. As I got closer I could instantly see she was not acting right. At breakfast she refused to eat and then I knew something was wrong. This little cat would usually devour her food and then move on to her brother Abu's as well. We asked our daughter to keep an eye on her while we were at work and to let us know if she got worse. Around 10:00 am my daughter came frantically running to tell me that Raja was having a seizure. Now this is enough to frighten any pet owner. Now knowing that Raja had a tendency to have focal seizures when she was not feeling well left me wondering whether she was just being dramatic, or that something more was brewing. 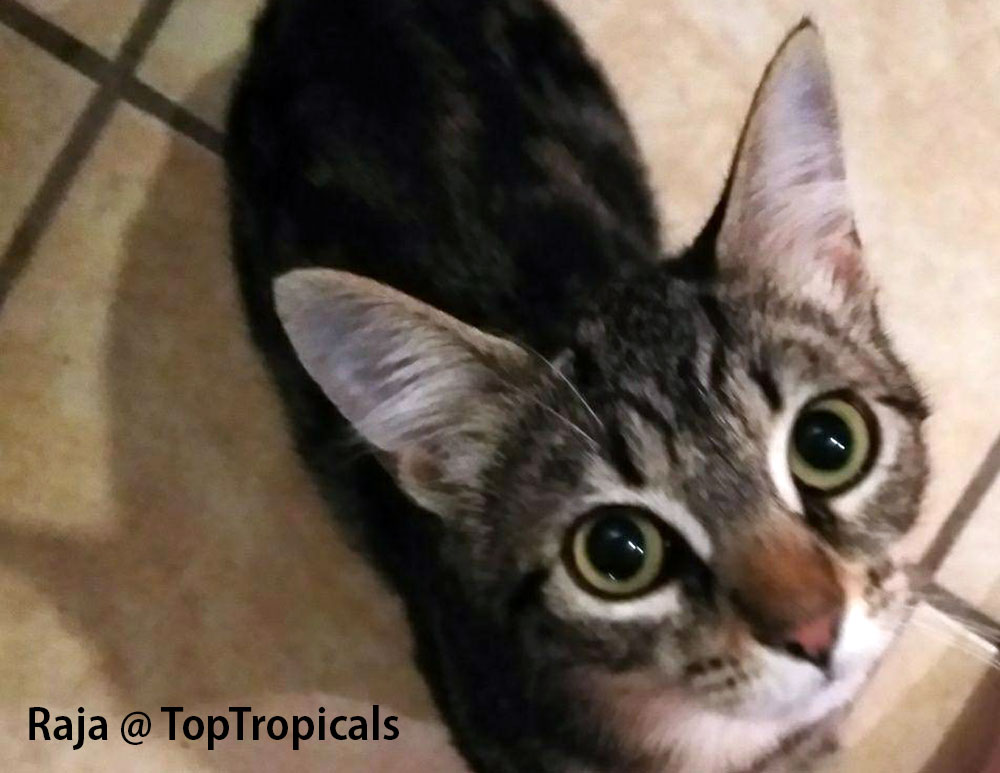 I picked up Raja from the floor and she was instantly went limp. In my heart I knew something was not right. I called the vet and rushed her in right away. The Dr. asked how long we had had her off the antibiotic and I explained three weeks. I was teriffied the infections were back. Dr. Andrew whisked her inside and came back out about thirty minutes later. He said, “You could not have picked any harder cats”. Dr. Andrew explained Raja had eaten something, and it was now stuck in her intestines. We decided to keep her there for the day and fill her full of fluids to see if she would pass the obstruction.

At 3:00 pm, the Dr. called, informing me that whatever she decided was better eating than her morning breakfast was still stuck and not budging. It was time for another surgery. Dr. Andrew suited up and began the surgery at 5:00pm. Not until 8:00pm did the good doctor finally call, saying we could come get her. He had no idea what it was that she had eaten but it was something hard wrapped in a bunch of hair. Driving to the doctors I couldn't imagine what she found so appealing in a hard "something" wrapped hairball, but I was glad it was now gone and that everything went well.

Once we got Raja home she started waking up from the anesthesia and she oddly started panting as if she had just run the fastest 5K marathon while while sporting an N95 mask. I sent a video of this to the doctor who said to bring her back in so we could check her lungs, just to make sure she hadn't aspirated any vomit. Jamie loaded Raja back into the car and made the midnight run back to the doctor. Her lungs were clear, and by the time Jamie has gotten to the vets office, the painting had all but stopped.

That morning she was still having her focal seizures, however I figured she was still coming out of the sleeping gas. Jamie and I left her in the capable caring hands of our daughter and went to work. Much to our surprise, my daughter Lindsey came in around 2:00 pm telling us Raja was having another seizure! Unlike the earlier incident, her whole body was shaking and flopping. All I could think was, oh god this is it. I ran as fast as I could to the house. I found Raja lying on the floor seemingly unconscious, her claws as tight as they could be into the rug. I carefully picked her up as I called for her to come back to consciousness. "Raja, it's me you have to fight now, you have to come back!” A few minutes passed, and finally she came-to and looked to be okay.

I called the vet and explained. He gave us three choices: take her to a neurologist; bring her to him the next day to run some tests and possibly put her on anticonvulsants; or to wait and see if they simply went away. We choose the latter since we would have to wait regardless to see him till the next day.

Raja's seizures continued until around 10:00 pm that night, and then as quickly as they came they went away. Twelve hours later still no seizures. Twenty four hours, then 2 days later, still no seizures. Two weeks later we brought her back to have her stitches taken out. Raja got the all clear.

Raja was her normal self for the next two weeks. Playing, jumping, running, sitting on your shoulder like a little bird as you walked around the house. Unfortunately, one morning we woke up and again she was not acting properly. I instantly thought, "what did she eat now?". The next day she started seizing again. This time was different... her fur puffed up as if she was electrocuted, and when trying to talk her into coming back, it took longer. Once she arrived back to consciousness, she was suffering from raspy, labored breathing.

It was time to have her see the doctor once again. As I loaded her into her cat carrier, I told her I loved her and that I would see her soon. Jamie drove her back to the vet's, and the doctor explained that according to the blood work, it was likely she had eaten something. This something was not stuck in her but was digested. Rajas lungs were filling with blood. This was not a fight we were going to win...

...As Raja took her last breaths Jamie held her letting her know how much she was loved. How much love she brought in the short time she was here. That night we laid her to rest under my favorite tree. A beautiful Rainbow Cassia in the front yard that was exploding with vibrant pink, yellow and white flowers... 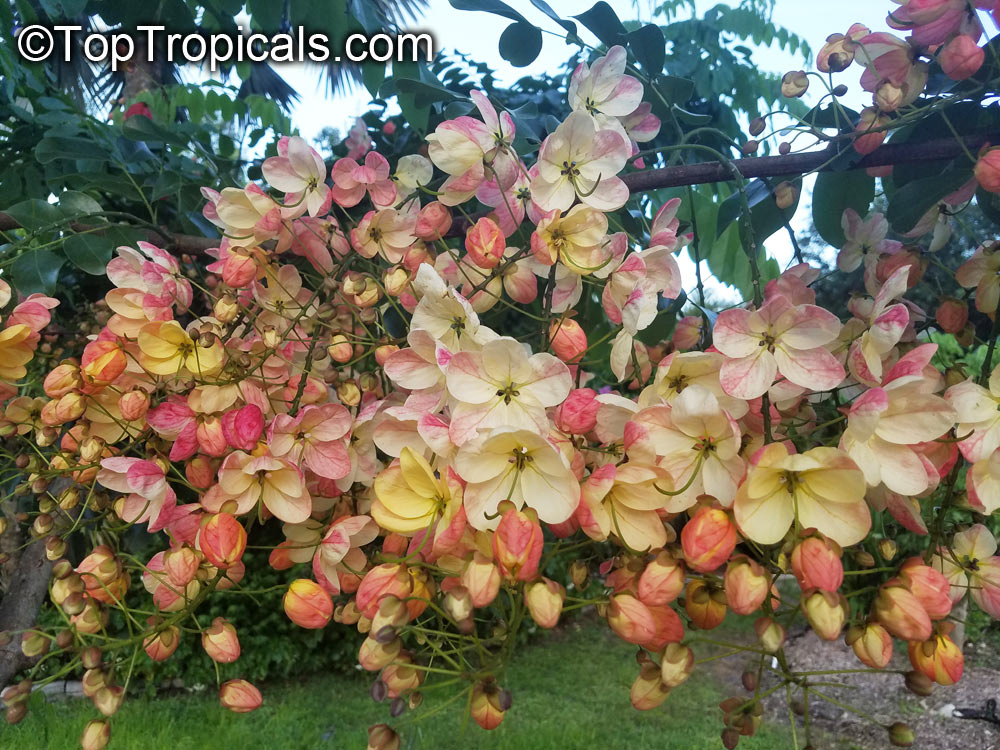 Raja taught us to never let our disabilities define what we can and can't do. She taught us that every animal deserves to know what love, a warm home, and a family means. She taught us resilience, determination and perseverance. Her last lesson for us was that it is okay to let go, that goodbye is not always an end, but a possible new beginning with new lessons learned.

I laid down for bed that night thinking there will never be any more Raja cuddles. With my arms out-stretched above my head, I felt a soft jump onto the bed. It was Abu... he walked softly over and curled his little body up in my arms, placing his head in my hands, and began to purrrr. Maybe his sister had spoken to him before she left, or maybe he was just quietly waiting for his turn to teach a few lessons himself.

His story comes next, and it is a much happier one! 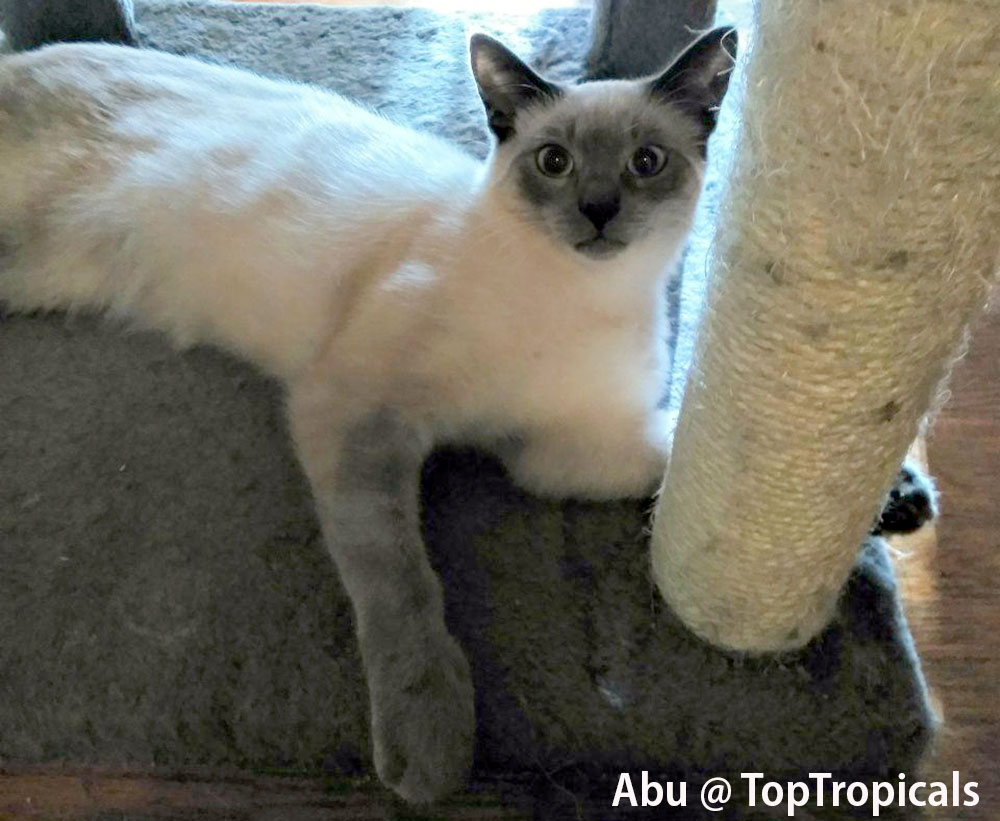