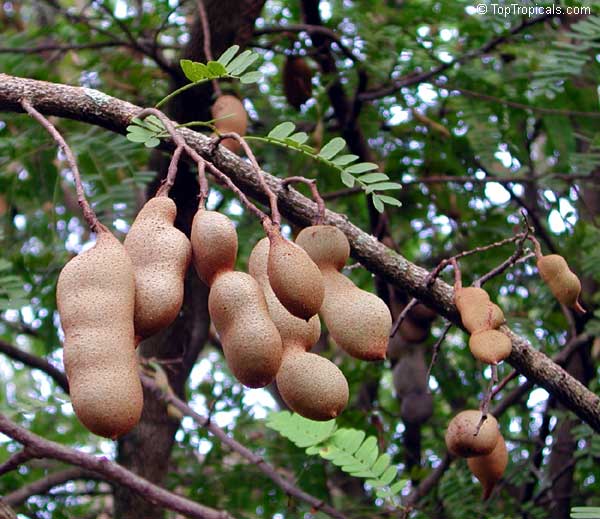 The name Tamarind is from the Persian "tama-i-Hindi" which means Indian Date.

In spite of the fact that the flowers of the Tamarind are inconspicuous, it is quite one of most handsome trees. It grows to a large size and great age and at all times of the year is a beautiful sight with its fine, spreading limbs and canopy of billowing foliage. Native to tropical Africa, it is now cultivated all over India, Burma and Ceylon, where it is much esteemed as an avenue, park or garden tree, for its useful fruit and for its highly prized timber. 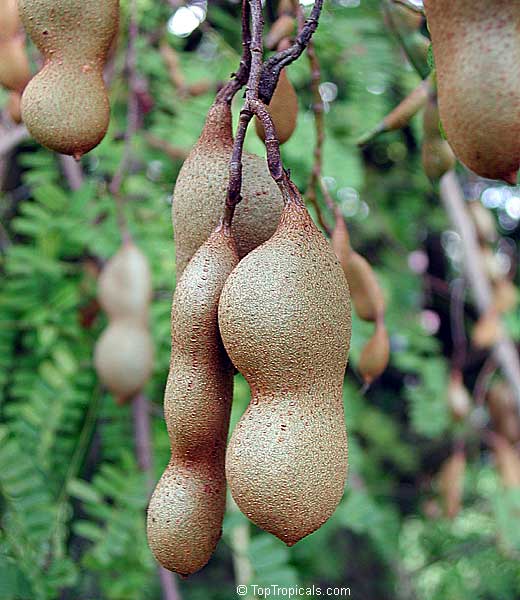 The Tamarind has a short, strong trunk, sometimes slightly buttressed to bear the weight of the wide, spreading crown. The thick bark is almost black and covered with longitudinal fissures and horizontal cracks.

In May and June the small, scented flowers appear in loose, terminal and lateral sprays. Inconspicuous amongst the mass of foliage, they are found, on close examination to have an unexpected beauty. Each flower is rather more than one inch across and the four creamy or yellow sepals spread to the full width, appearing more like petals. The actual petals are three in number, one being smaller. They, also, are creamy or yellow but are covered with a fine net-work of deep red veining; the edges are closely pleated. Three green stamens and one long pistil curve from the centre. Before starting to open the buds are enclosed in two sheaths, often crimson in color and these make a pretty variation on the flower sprays. The pods, which are usually fairly numerous, vary considerably in size and shape. Many are sickle-shaped, some like long, thick beans and others nearly as short as their breadth. They are at first green, but a dun, felt-like film over the green makes them, appear brownish. When ripe they are buff and brittle. The seeds, from one to ten, are contained in a fibrous pulp and the pod is more or less constricted between these seeds. In some varieties of Tamarind the pulp is brown and acid, in others it is sweet but the best is considered to be the one with reddish pulp. 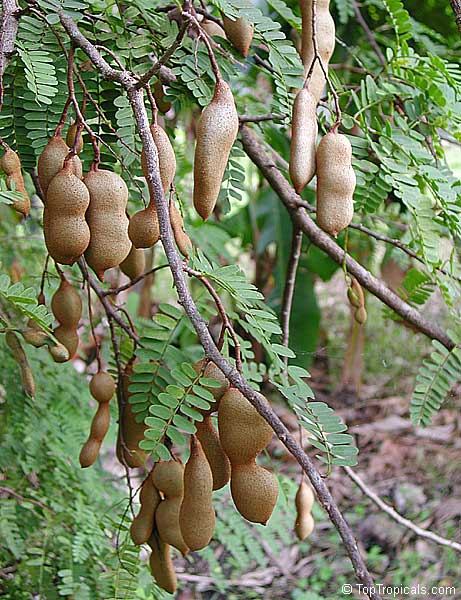 The tree is never quite leafless but at times it is bare enough for many of the branches and twigs to be seen. Then the leaves are dark green and dull, but at the beginning of the year and sometimes in September, too, new, fresh leaves appear. The transformation is striking. One week there is a tired, dusty tree; the next, a billowing cloak of brilliant green covers it from top to bottom and there is barely a glimpse of branch or twig. The leaves are compound, dividing into ten to twelve pairs of leaflets. These are quite small, becoming even smaller at the end; they are oblong, smooth and grow obliquely. There are many uses to which the fruit is put. The pulp is a popular ingredient for curries and preserves. Sometimes it is pressed, preserved and sold by weight in the bazaars. It also makes a good sherbert. Medicinally it is used as a laxative. The seeds, ground to powder and boiled to a paste with gum, make a strong cement; from them, too, is obtained a substitute for wheat or other flour, used by jungle people to make chapattis. The husks of the seeds have even been employed for road surfacing. It was also discovered that from the seeds could be made a cheap, efficient substitute for cereal starch which is used for sizing cotton yarn, jute fabrics and woollens. 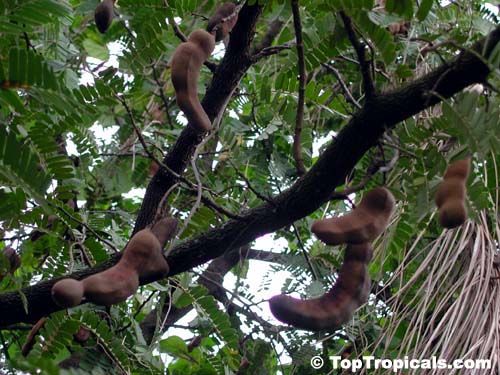 Leaves and flowers, too, are useful as they are both edible and the leaves make a good poultice for boils; also an infusion from them makes a fine yellow dye which is used to give a green color to silks previously dyed with indigo.

The wood is highly prized, though hard and difficult to work and it is unfortunate that the heart wood is so small. However it is widely used for making wheels, mallets, furniture, oil and sugar mills, etc.

Country people have a prejudice against sleeping under Tamarinds because they say the trees exude unhealthy vapours. This is no doubt correct to a degree as the cloth of tents pitched under Tamarinds in wet weather become discolored and rotten after a time; many plants will not grow beneath them but it is a mistake to suppose that this applies to all herbs and shrubs.