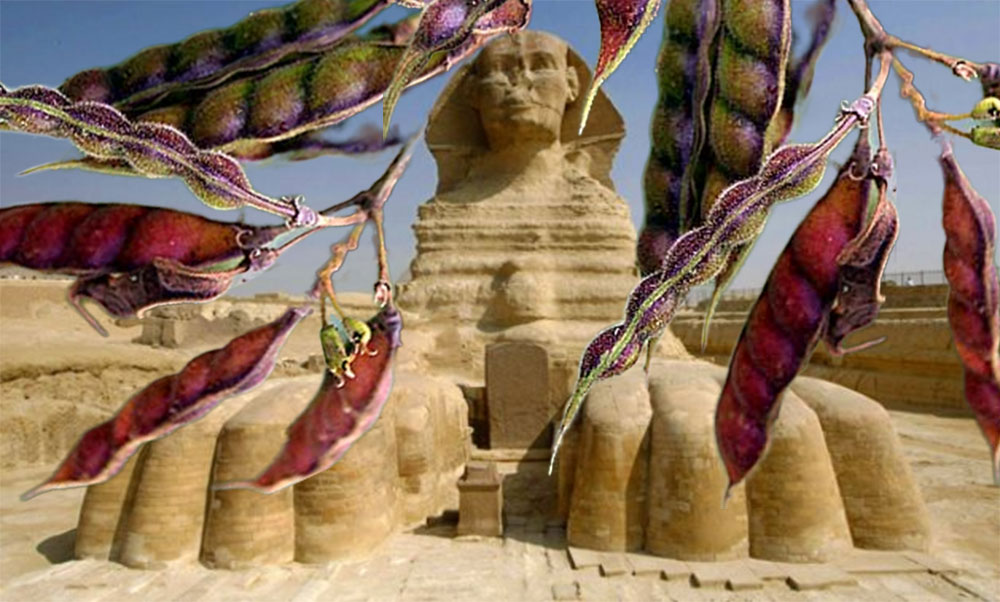 The plant I am going to tell you about is very ancient. It has been existed among people for more than 4800 years. Although there are much older plants that trace their history back to the age of dinosaurs, and exist today, perfectly adapted to modern conditions, this one is edible, tasty, and healthy. It still successfully feeds half of the world's population. Surprisingly, some people from the Western world haven't even heard about it.

This plant's scientific name is Cajanus cajan. It is a perennial legume from the family Fabaceae native to the Old World and is widely cultivated in tropical and semitropical regions around the world, being commonly consumed in South Asia, South East Asia, Africa, and Latin America.
In English it is commonly referred to as Pigeon Pea which originates from the historical utilization as pigeon fodder in Barbados. The names Congo pea and Angola pea developed due to the presence of its cultivation in Africa and the association of its utilization with those of African descent.

Its cultivation has been documented by at least 2,800 BC in peninsular India, where it's presumptive closest wild Cajanus cajan occurs in tropical deciduous woodlands. Archaeological finds of Pigeon pea cultivation dating to about 14th century BC have also been found at the Neolithic site in South Indian states.
From India it may have made its way to North-East Africa via Trans-Oceanic Bronze Age trade that allotted to cross-cultural exchange of agricultural products. The earliest notion of Pigeon peas in Africa was found in Ancient Egypt with the presence of seeds in Egyptian tombs dating back to around 2,200 BC exist. Pigeon peas could be the food of the people who built the pyramids in Giza; it could be seen between paws of the newborn Great Sphinx...

From East Africa, cultivation spread further West and South through the continent, where by means of the Trans-Atlantic slave trade, this nice and nutrient plant reached the Central Americas countries and Caribbean islands around the 17th century.
In 1824 Pigeon peas were introduced to Hawaii with a few specimens becoming naturalized on the islands, but they wouldn't gain much popularity. However, by the early 20 century Puerto Ricans began to emigrate from Puerto Rico to Hawaii to work in sugarcane plantations in 1901-1906. Pigeon peas are said to have been popularized on the islands exactly by the Puerto Rican community. By the First World War their cultivation began to expand on all Hawaii islands, and they are started active cultivated and consumed by locals.
And then, step by step, Pigeon peas spread to many other Pacific islands and that ended its travel circle around the world. 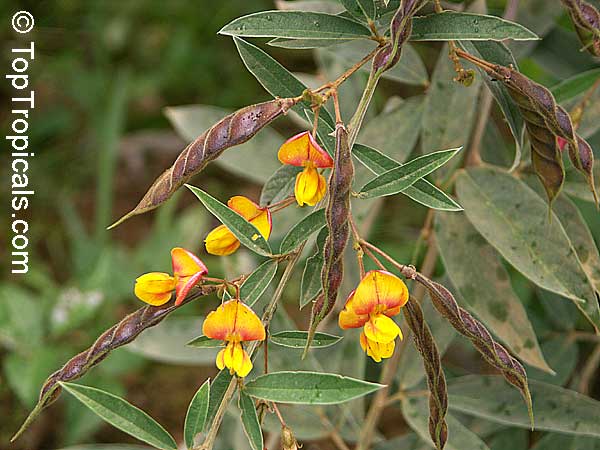 An erect woody, annual or short-lived perennial shrub or small tree, 3-8 ft tall with a deep taproot (to 7ft). Young stems are angled and pubescent. Leaves pinnately trifoliolate, alternate, green, velvety pubescent above, greyish-green pilose beneath set in a spiral around the stem. 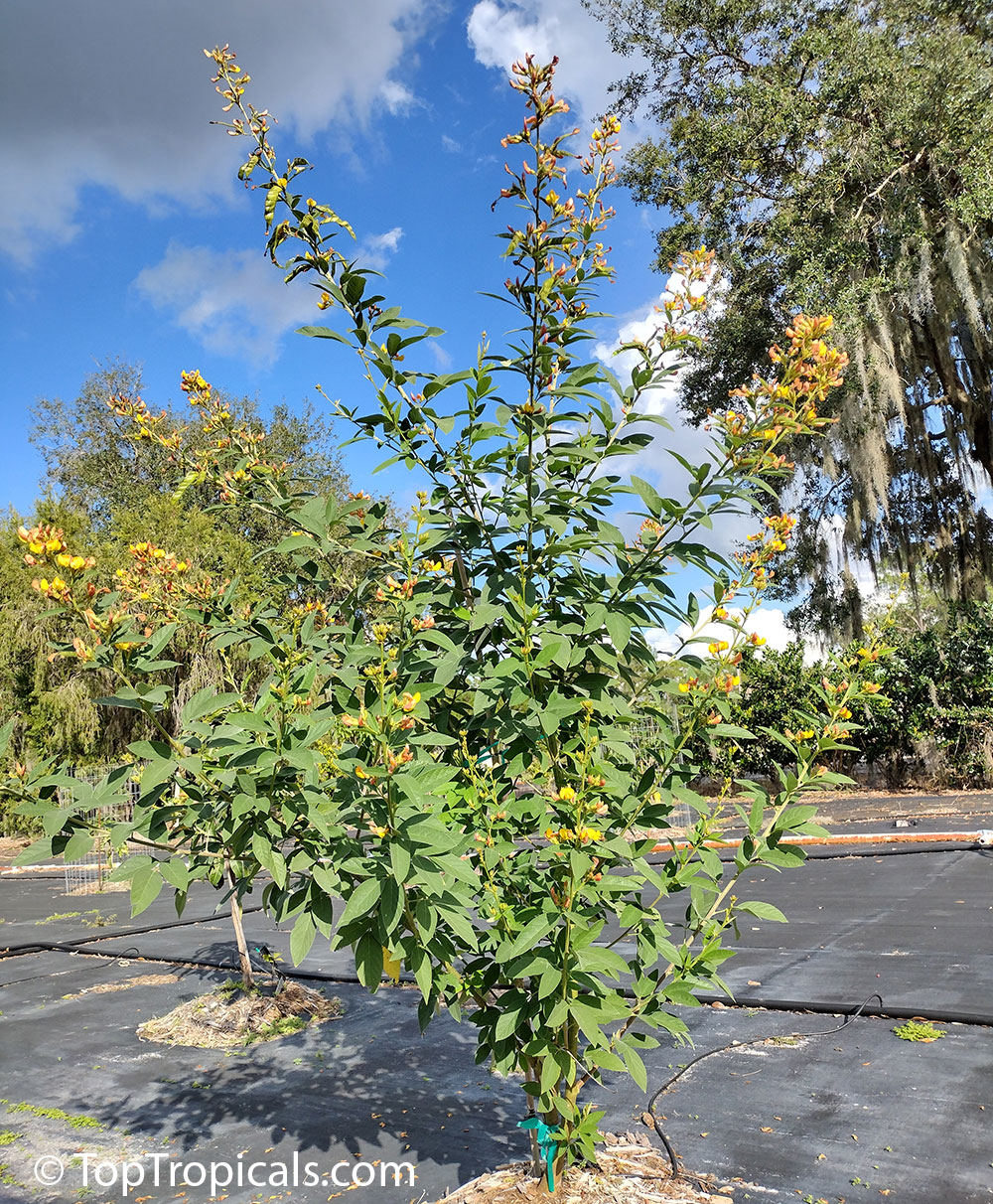 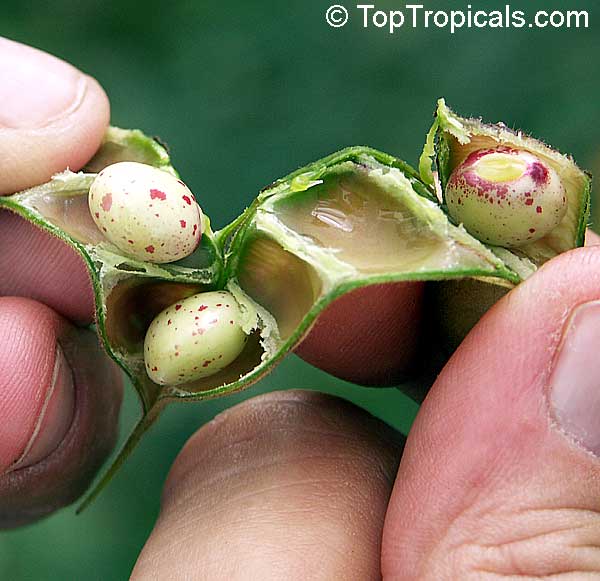 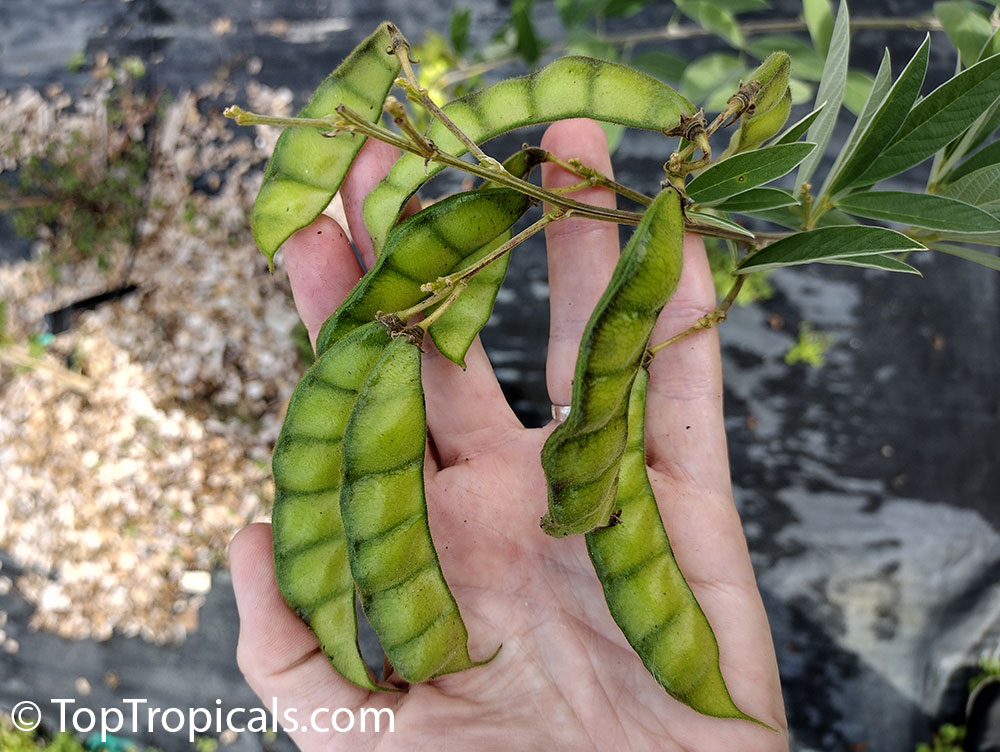 What are the uses of the Pigeon Peas?

The plant is often grown in the tropics and subtropics for its wide range of uses, including food and medicine. It is also often used as a green manure and for soil stabilization.
Cajanus cajan has a symbiotic relationship with certain soil bacteria, these bacteria form nodules on the roots and fix atmospheric nitrogen. Some of this nitrogen is utilized by the growing plant but some can also be used by other plants growing nearby.

Seed are small but flavorful. Very young seeds can be cooked and eaten like peas, going well in rice dishes. Mature seeds are dried and added to soups and stews. The seed may be used instead of soya bean to make tempeh or tofu, and can also be sprouted and eaten when about 25mm long. The unripe pods are eaten in curries. Leaves and young shoots - cooked and used as a vegetable - they contain up to 9% protein. All parts of Cajanus cajan (root excepted) are very popular in Asian and African cuisine. 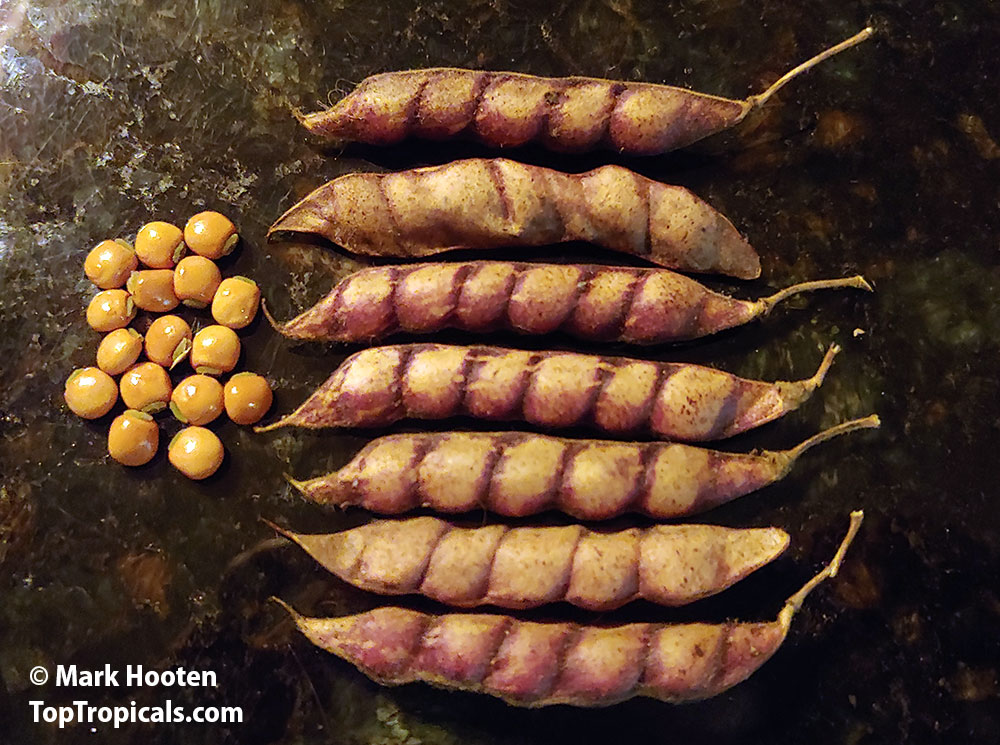 Energy 569 kJ (136 kcal), Carbohydrates 23.88 g, Sugars 3 g, Dietary fiber 5.1 g, Fat 1.64 g, Protein 7.2 g
Per 3.5oz (100 g) of peas contains:
Vitamins All Vitamins B, including very rare B9 and B4 - Choline (an essential nutrient for humans and many other animals. Choline occurs as a cation that forms various salts. To maintain health, it must be obtained from the diet as choline or as choline phospholipids, like phosphatidylcholine), Vitamin C, Vitamin E Vitamin K.
Minerals: Calcium, Iron, Magnesium, Manganese, Phosphorus, Potassium, Sodium, Zinc 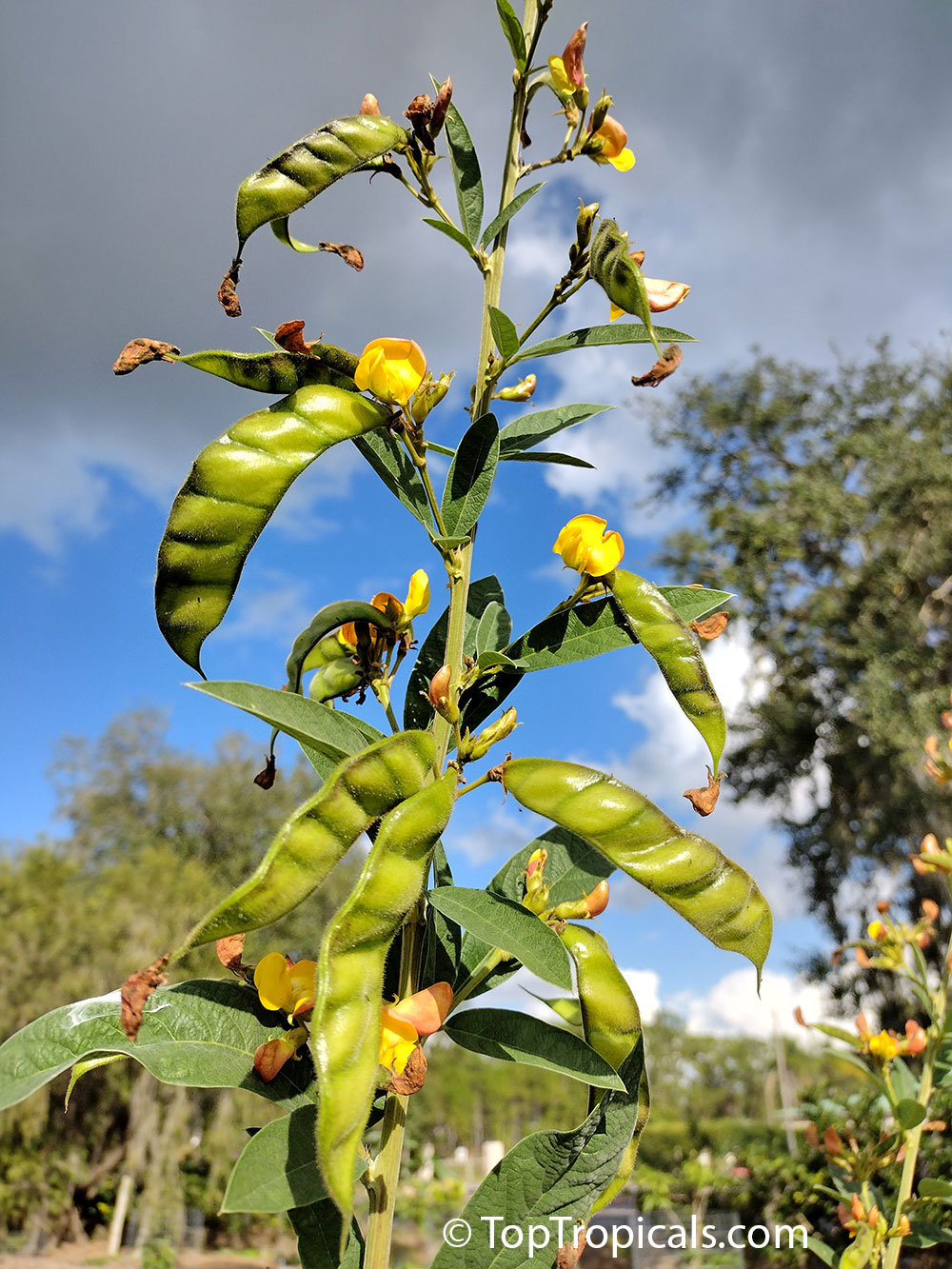 There are many folk medicinal uses for Cajanus cajan. In India and Java, the young leaves are applied to sores. Indochinese claim that powdered leaves help expel bladderstones. Salted leaf juice is taken for jaundice. In Argentina the leaf decoction is prized for skin irritations. Floral decoctions are used for bronchitis, coughs, and pneumonia.

Chinese shops sell dried roots as an alexeritic, anthelminthic, expectorant, sedative, and vulnerary. Leaves are also used for toothache, mouthwash, sore gums, child-delivery, dysentery. Scorched seed, added to coffee, are said to alleviate headache and vertigo. Fresh seeds are said to help incontinence of urine in males, while immature fruits are believed of use in liver and kidney ailments. 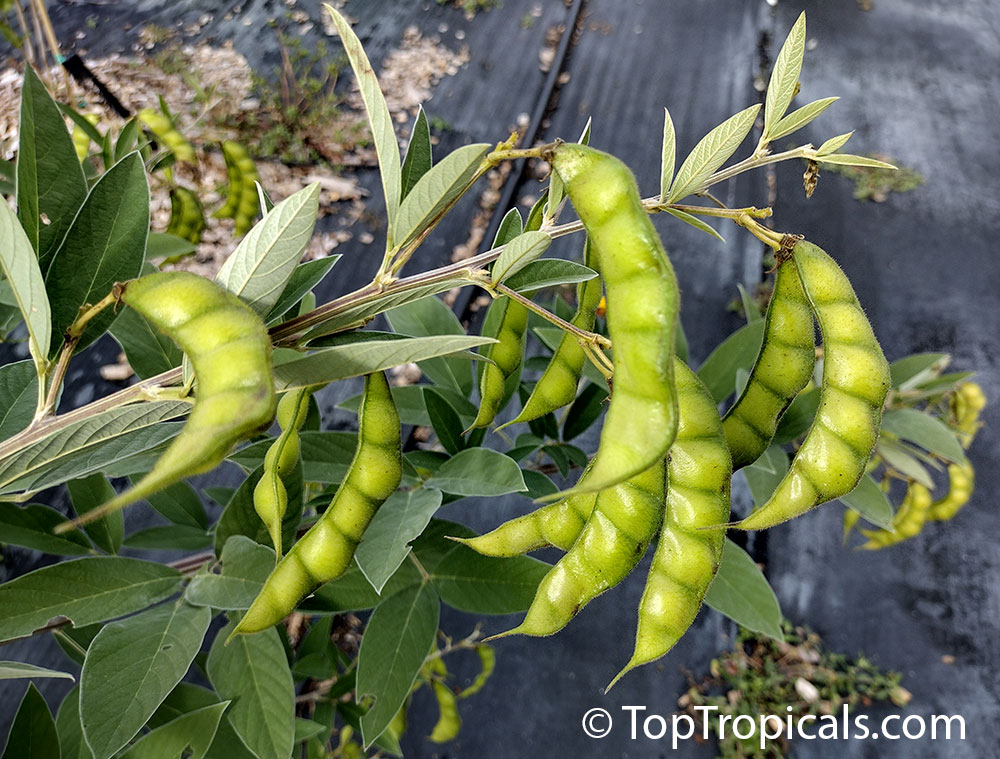 Pigeon Pea has reached us from the depths of centuries, it is a beautiful, useful and unpretentious plant. It tolerates low fertility soils, very drought tolerant, dual purpose crop for food and fodder, excellent green manure for improving soil structure and quality. It can decorate the garden and improve the soil in it.
And, at last, it gives us flavorful, very nutritious and healthy food. By the way, it is possible that useful dishes of Pigeon peas will eventually become as familiar and beloved as Japanese sushi and sashimi have become for Western people. After all, some 70-80 years ago it would not have occurred to anyone to eat raw fish wrapped in rice and seaweed :)