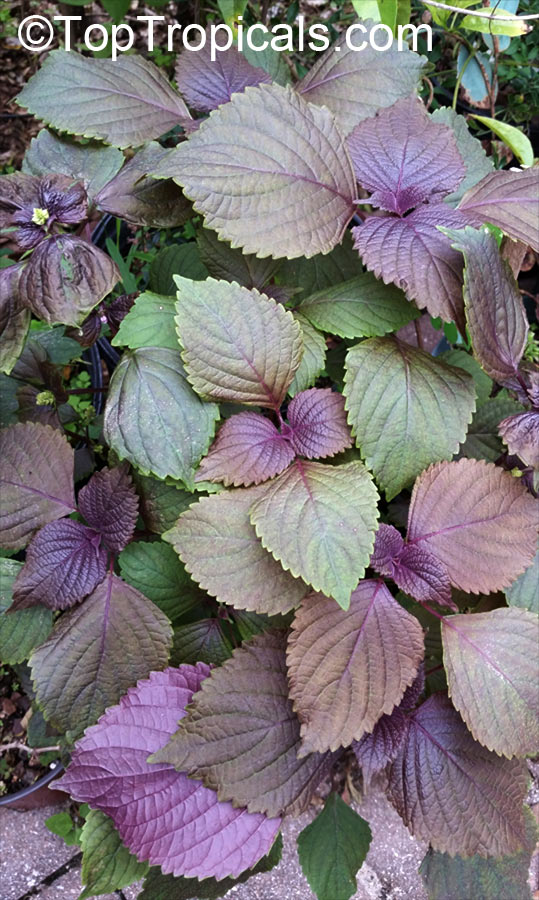 Shiso is a perennial plant that may be cultivated as an annual in temperate climates, and occurs in both red- (or purple-) leaved and green forms. There are also frilly, ruffled-leaved forms called chirimen-jiso and forms that are red only on top, called katamen-jiso.

The Japanese name shiso is a loan word from Chinese zisu that means purple.

So it stands to reason that traditionally in Japan shiso denoted primarily the purple-red form. In recent years there has been a paradigm shift, with the green becoming the first to come to mind, and the red considered atypical. The purple-red type may be known as akajiso. The quintessential use is for coloring the pickled plum, or umeboshi. The shiso leaf turns bright red when it reacts with the umezu, the vinegary brine that wells up from the plums after being pickled in their vats. The red pigment is identified as the Perilla anthocyanin, aka shisonin. The mature red leaves are not very amenable to use as a raw salad leaf. But germinated sprouts me-jiso have been used for years as garnish to accent a Japanese dish such as a plate of sashimi. The tiny pellets of buds and seed pods can be scraped off using the chopstick or fingers and mixed into the soy sauce dip to add the distinct spicy flavor. The sprouts and flowerheads of the green variety are also used the same way.

Bunches of green shiso leaves packaged in styrofoam trays are now familiar sights on the supermarket shelves in Japan, as well as in Japanese food markets in the West. But production in earnest as leafy herb did not begin until the 1960s.

P. frutescens var. frutescens, the oilseed crop, is the source of perilla oil. This variety is used as an ingredient in Korean cuisine, both "wild sesame'" (deulggae), and "sesame leaves", which are green. It is known in Japan as egoma.

It is also called rattlesnake weed, because the sound the dried stalks make when disturbed along the footpath is reminiscent of the rattlesnake rattling sound.

The red perilla has red leaves and used mostly in fish stews in China. Koreans make pickled "wild sesame" perilla leaves with red chili powder and soy sauce. Oil extracted from P. frutescens var. frutescens is still used to cover cookies in rural areas of Korea. Sometimes, the seeds are ground and added to soup for seasoning in Korea. Parts of the plants eaten are the leaves, flower and buds from the flower stalks, fruits and seeds, and sprouts. Japanese use green shiso leaves raw with sashimi. Dried leaves are also infused to make tea. The red shiso leaf is not normally consumed fresh, but needs to be e.g. cured in salt. The pigment in the leaves turns from purple to bright red color when steeped in umezu, and is used to color and flavor umeboshi.

We have this item for sale
Image gallery: 18 images 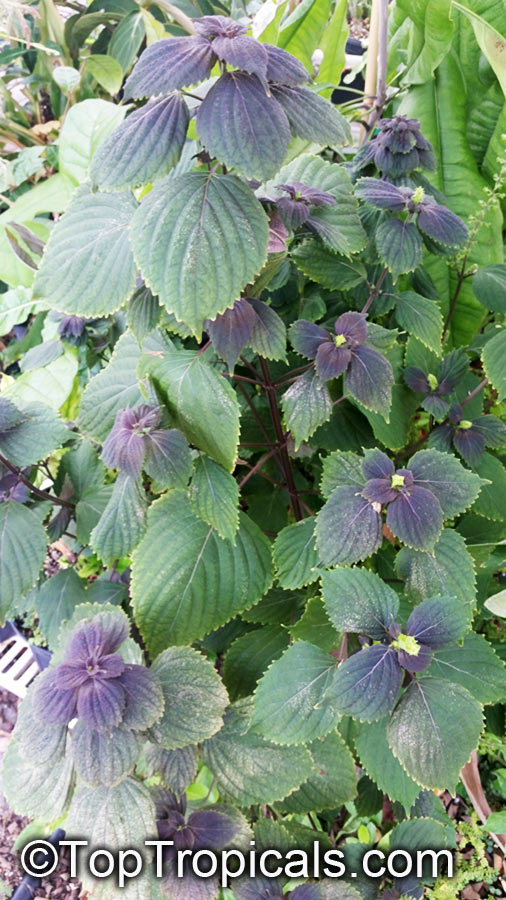 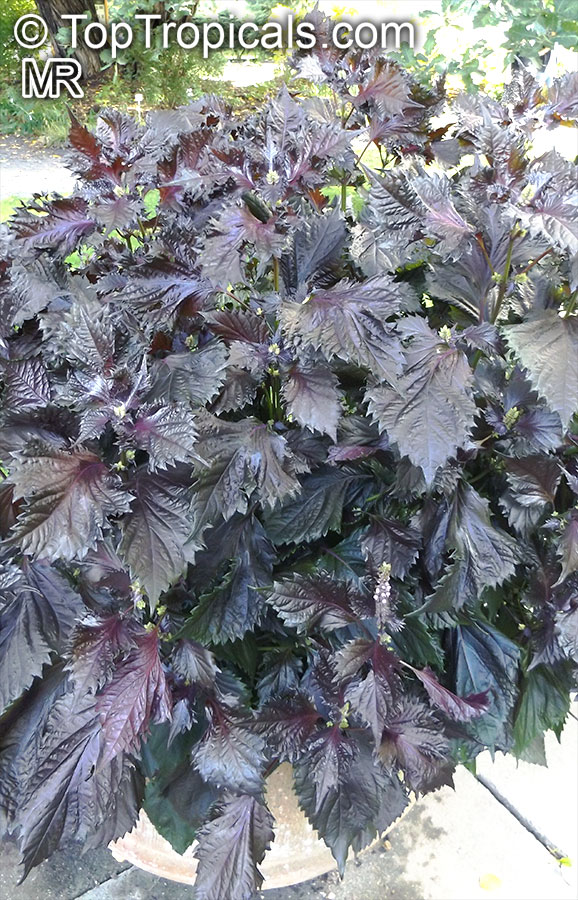 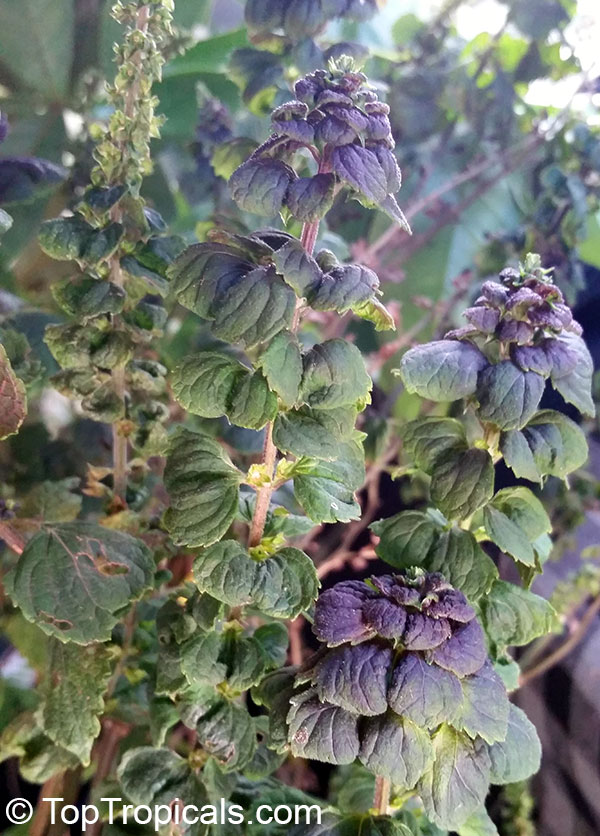 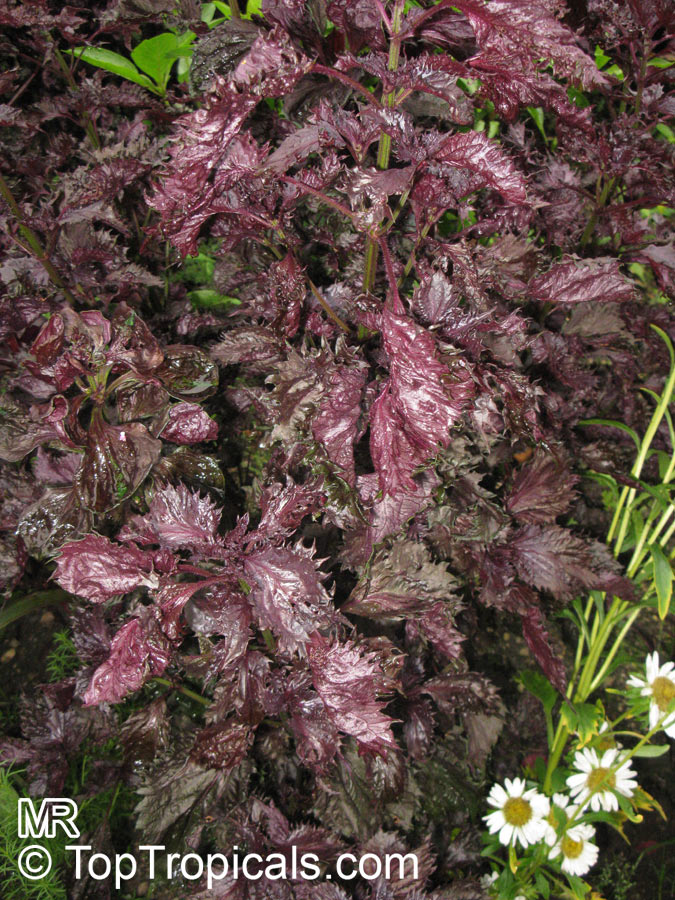 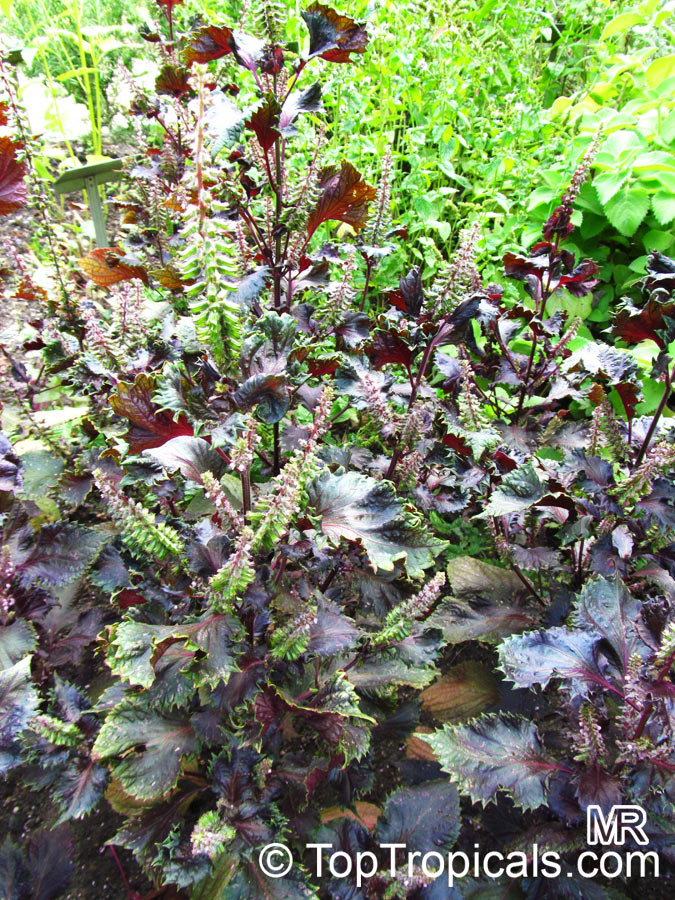 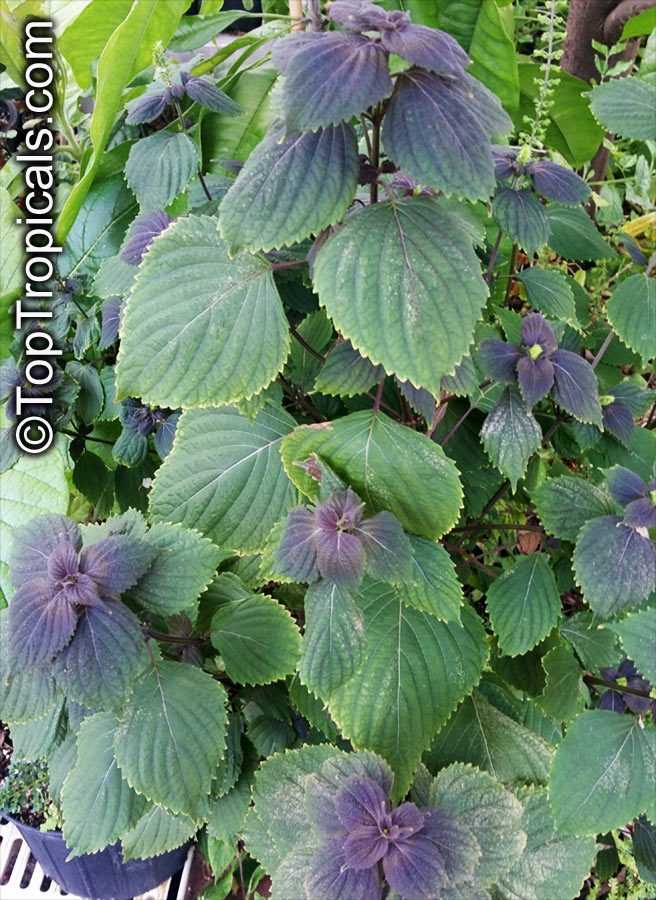 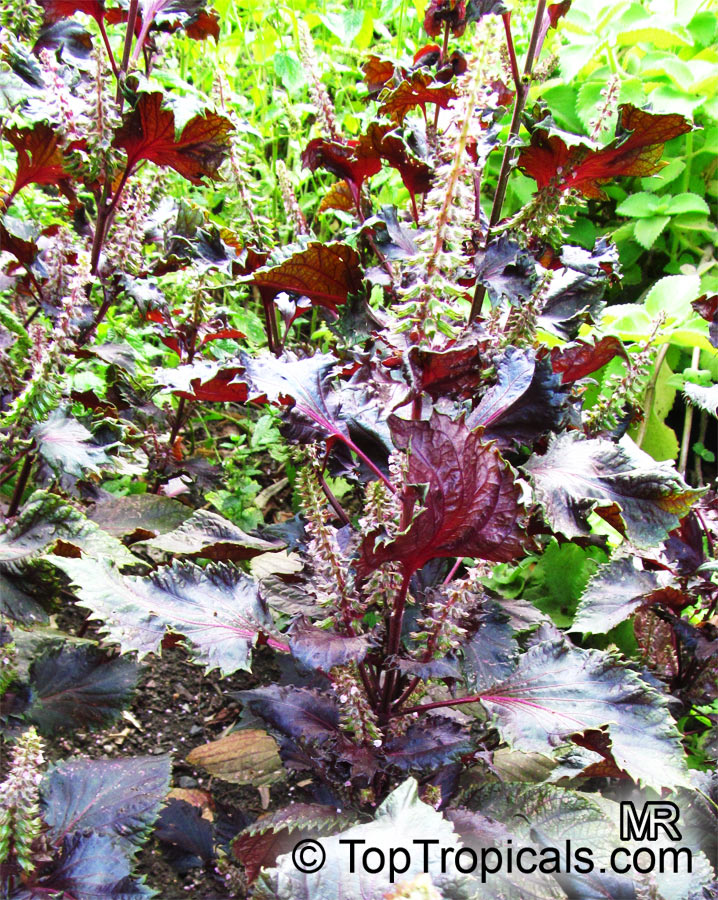 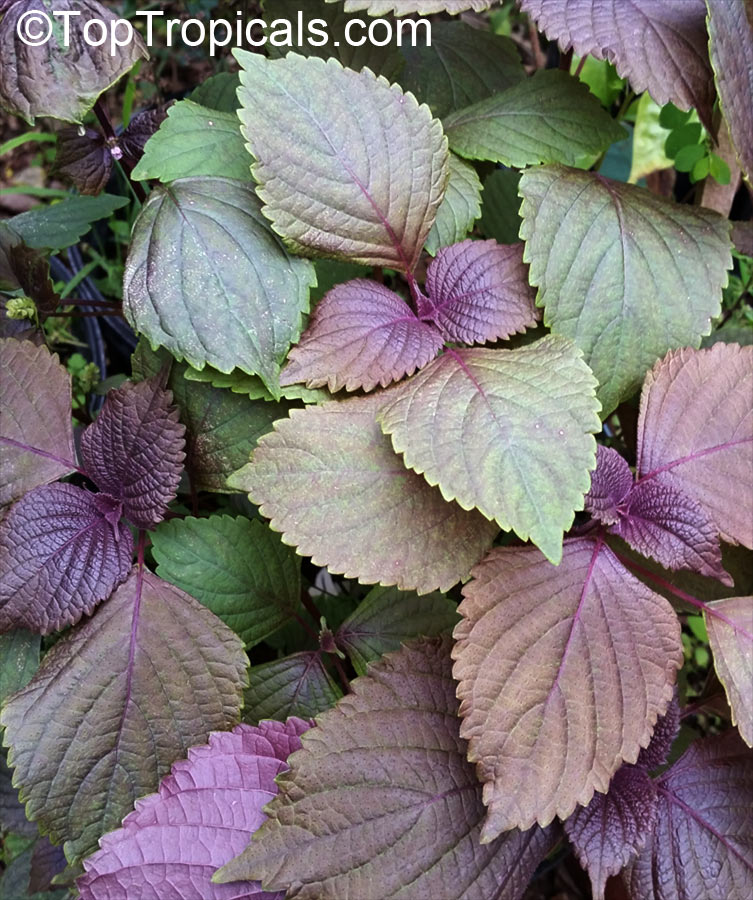 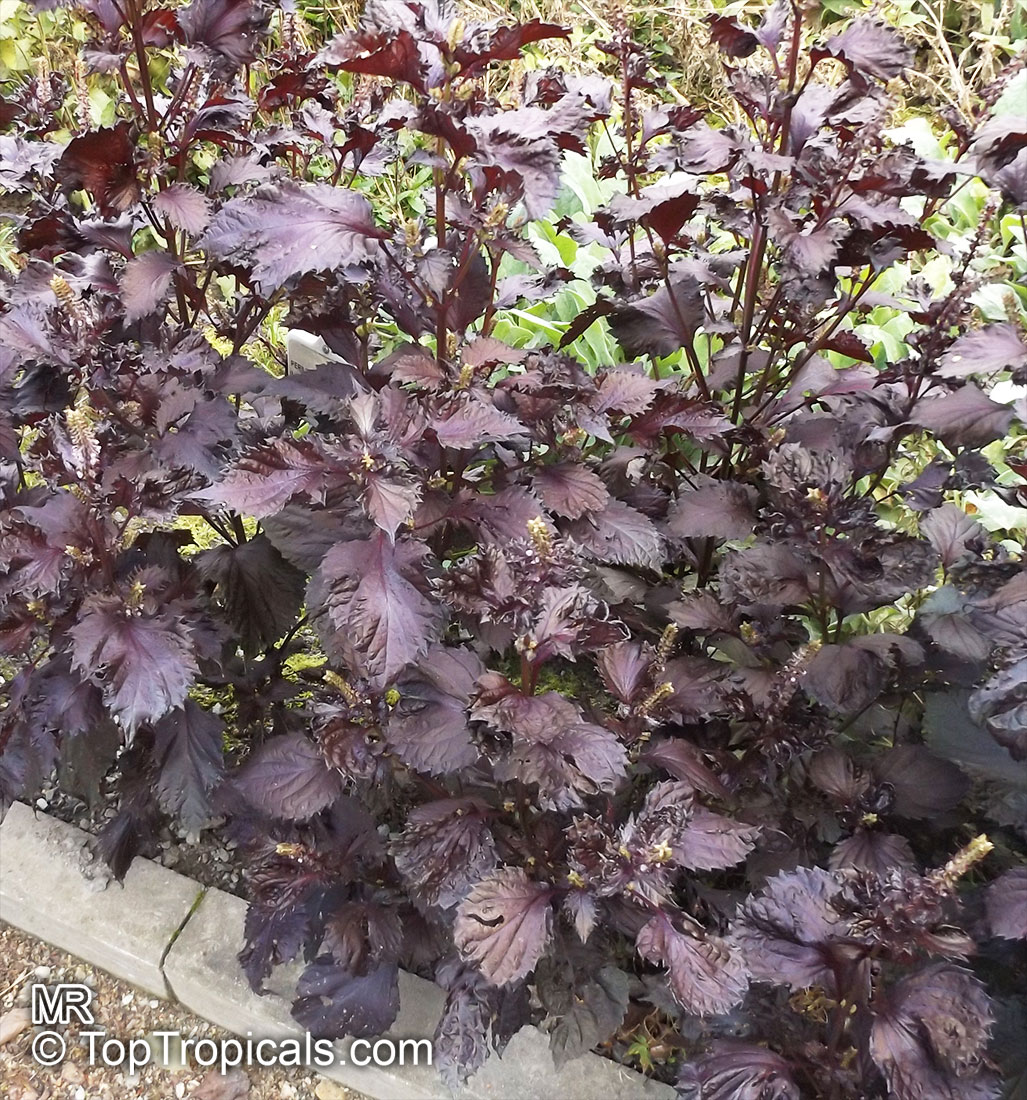 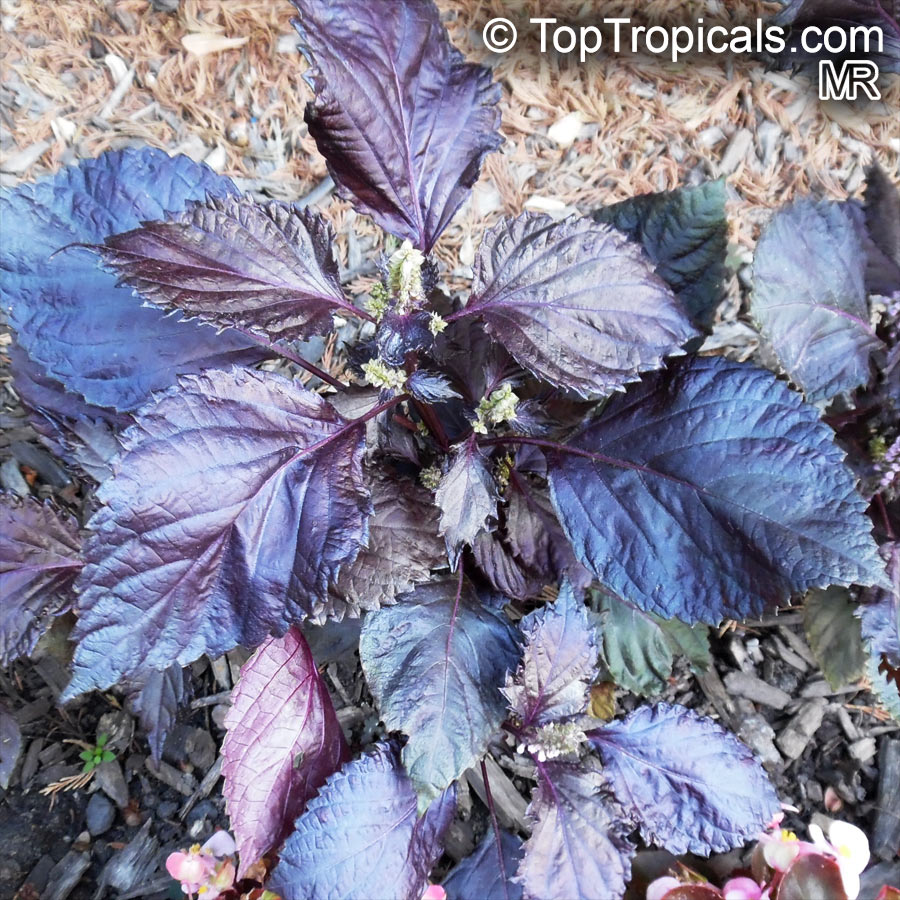 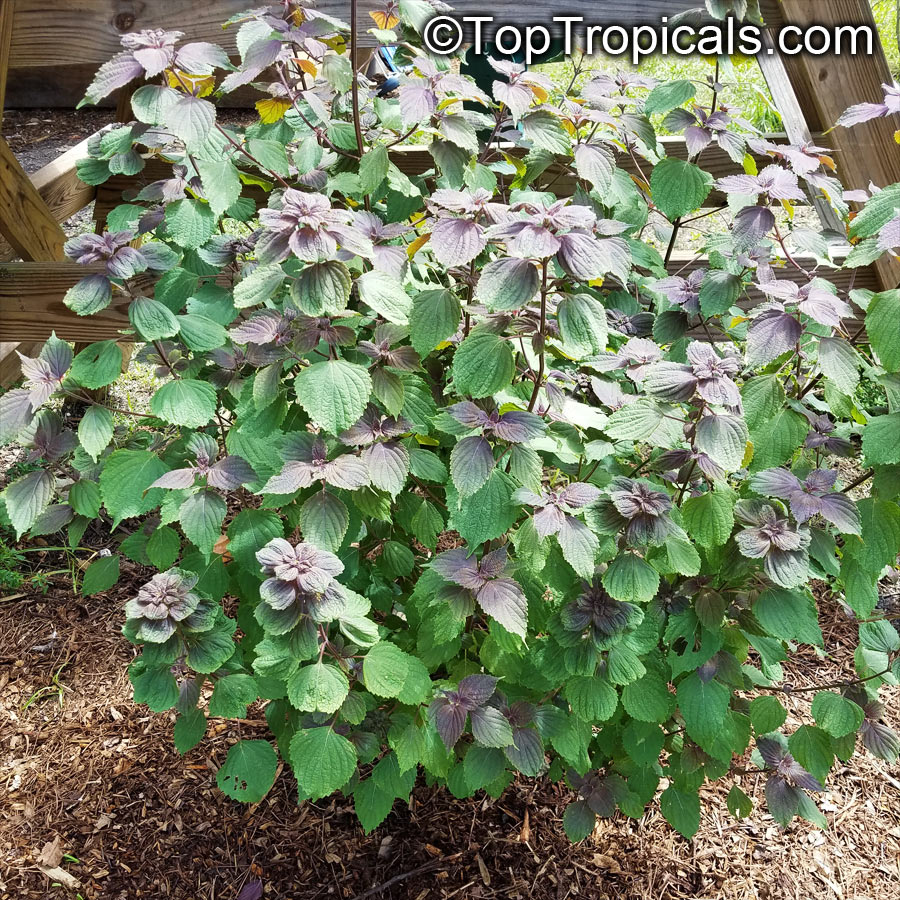 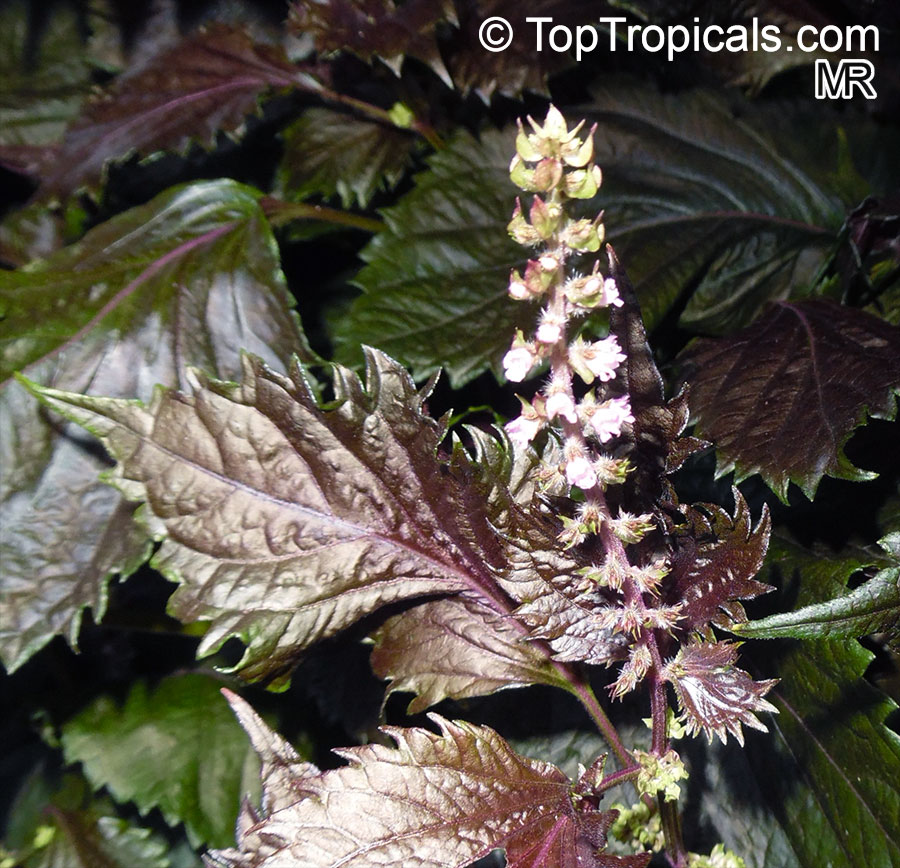 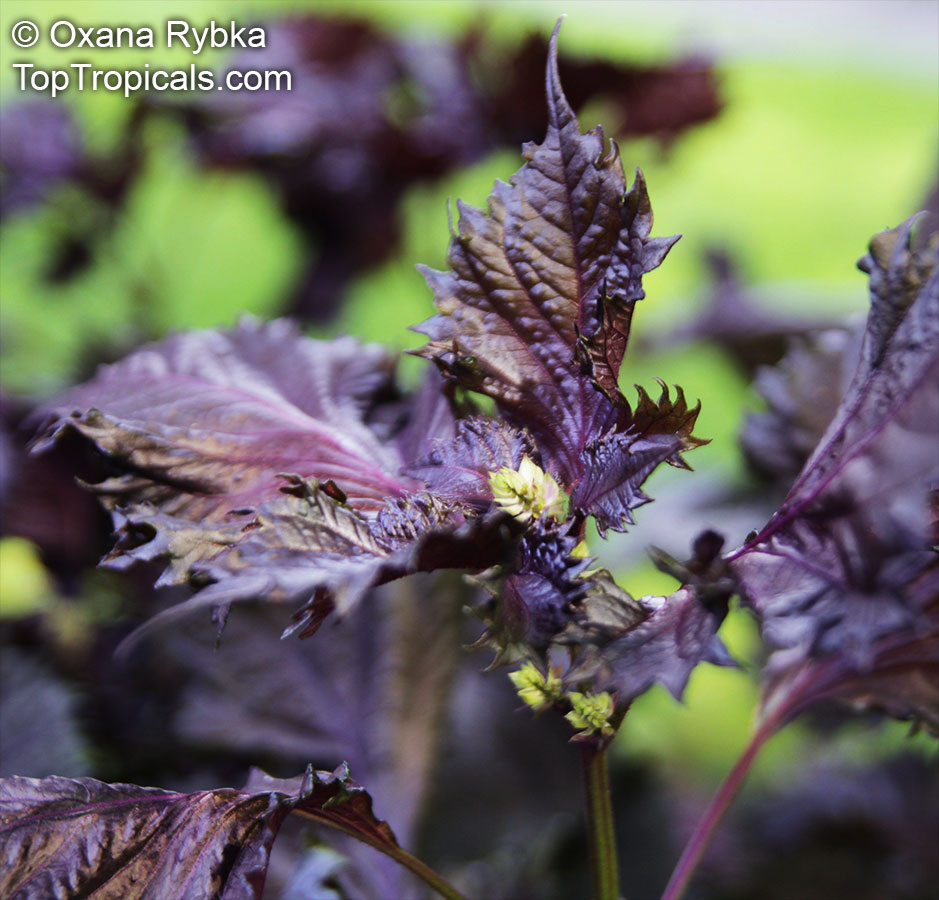 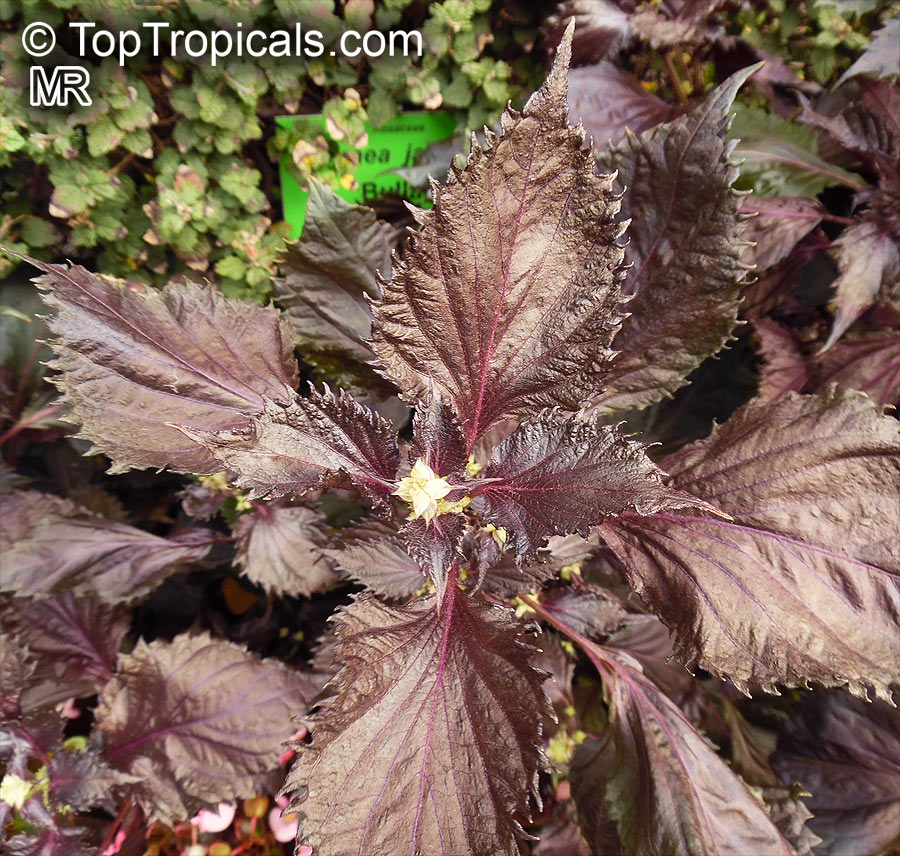 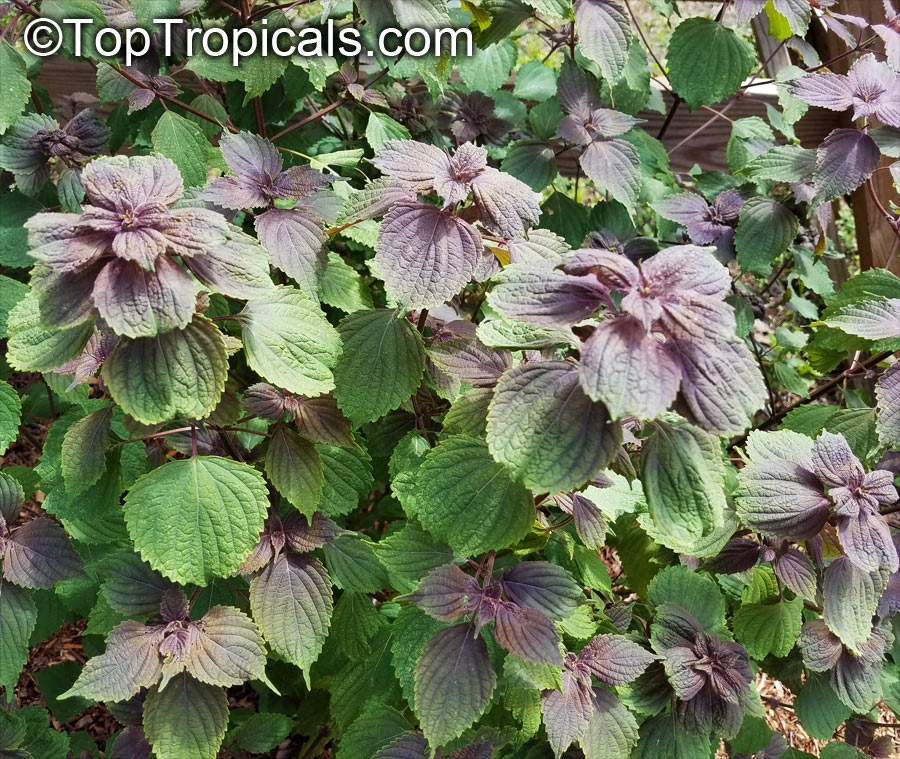 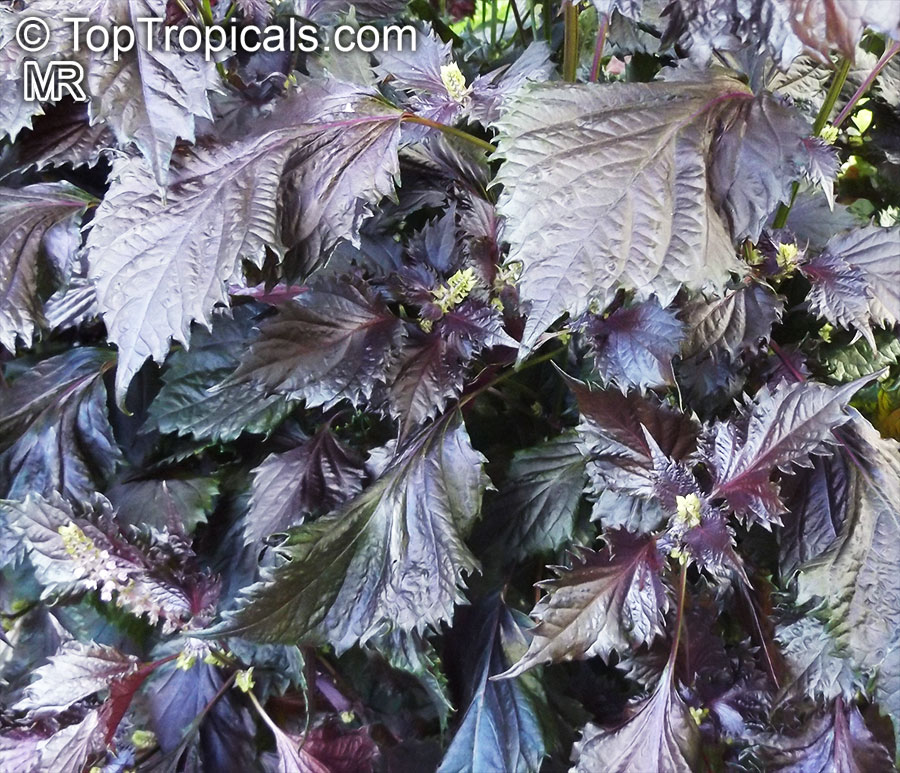 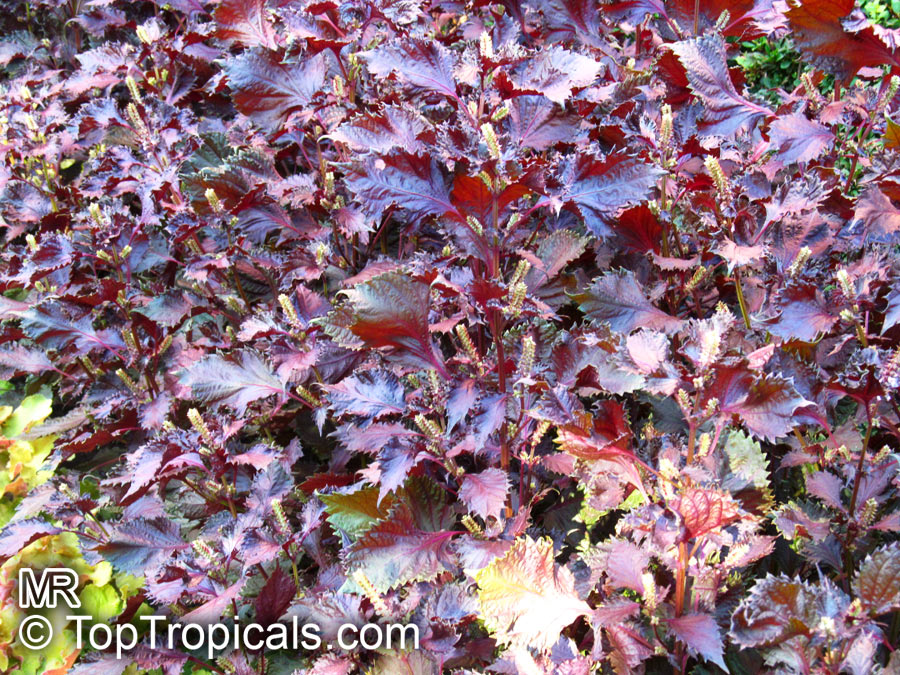 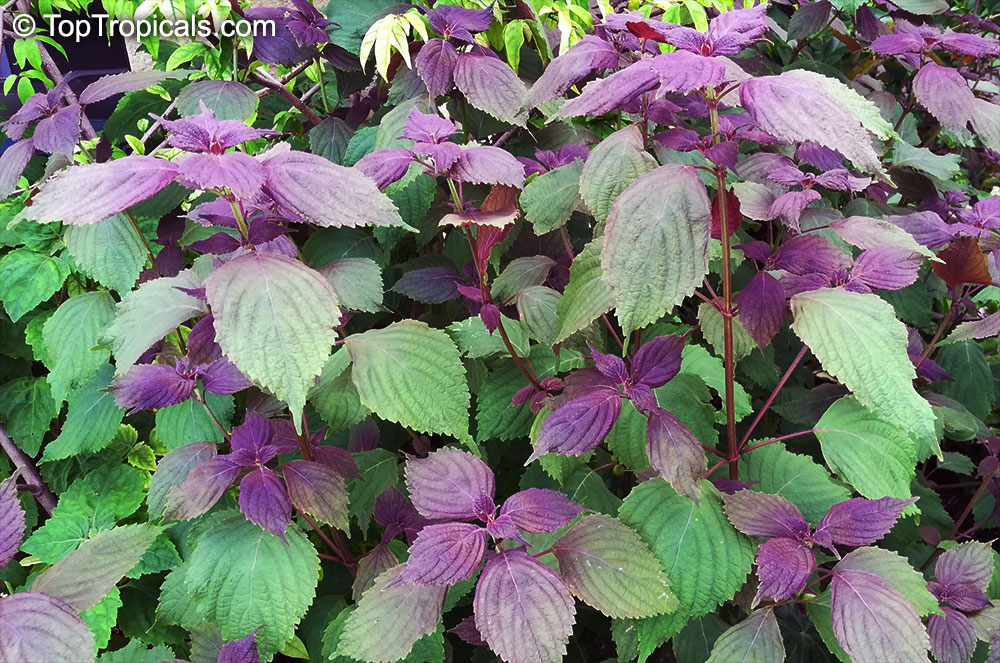