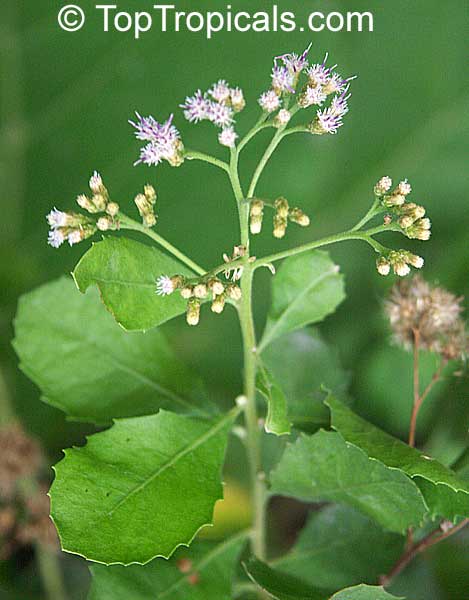 The Ageratum is an annual herb that grows to a height of around two feet and produces clusters of small, pretty flowers along its hairy stems. In some countries, it is classed as a weed which is hard to control. In traditional medicine systems in areas where Ageratum grows continuously, it is widely used. In Brazil, an infusion of its leaves or the entire plant is employed to treat colic, colds, fevers, diarrhea, rheumatism and spasms, as well as serving as a tonic. It is also recommended for the treatment of burns and wounds. In countries of Latin and South America, it is utilized for its antibacterial properties to treat infectious conditions and bacterial infections. In Africa, it is employed for fever, rheumatism, headache, pneumonia, wounds, burns and colic.

Ageratum is native to Central America and the Caribbean and can be grown in USDA Zone 9-11, either outdoors or indoors in cooler climates. It grows best in rich, moist soil, with regular watering. Its colorful blooms, which come in shades of pink, white and off-white, will attract butterflies and hummingbirds. The flowering season of Ageratum is usually all summer and the shrub often self-seeds depending on the climate.

To keep Ageratum healthy, the soil should be kept moist but not soggy. Deadhead the spent flowers and avoid overwatering to prevent root rot. If planting in a pot, it is best to first use a potting soil specifically formulated for containers, and then cover with 1-2 inches of a moisture-retaining material such as straw or bark. To encourage blooming, cut the plant back after flowering.

While Ageratum has a place in traditional medicine systems, it is believed to be invasive in parts of the United States. Therefore, caution should be used when planting and spreading to wild, natural areas should be avoided to prevent ecological damage.