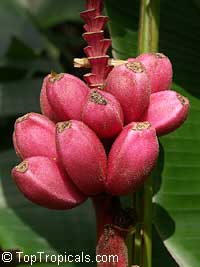 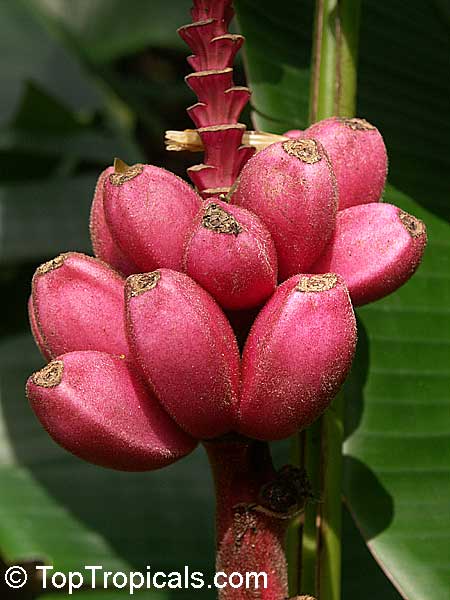 Pink Velvet Banana. An ornamental banana with bright...  more
Musa velutina markkuana - seeds
Pink Velvet Banana. An ornamental banana with bright pink colored fruits. The plant is very attractive as a garden ornamental and its popularity is enhanced by its relative hardiness for a banana. Reported to be hardy to 20F, though temperatures below 32F generally kill back foliage which will regrow when temperatures warm. While not dwarf in form, this species generally remains quite small and can flower and fruit in just over a year from seed. A small slender plant with narrow leaves to about 4ft, which flowers at a very young age (usually in the second year) producing a very attractive red and cream flower spike that stays reasonably upright. The pink fruits are covered with thin hairs, hence its alternative common name, the Hairy Banana. The novelty is the hand of small pink velvety bananas which form quite a talking point.
Grown as an ornamental for its beautiful pink-fruits and large pink flowers. The fruits could be edible (from some sources), though they are quite seedy with minimal flesh.
This banana suckers readily from the base to produce a nice clump for next year, or you can cut them off for additional plants to grow on. Musa velutina grows readily from fresh seed.