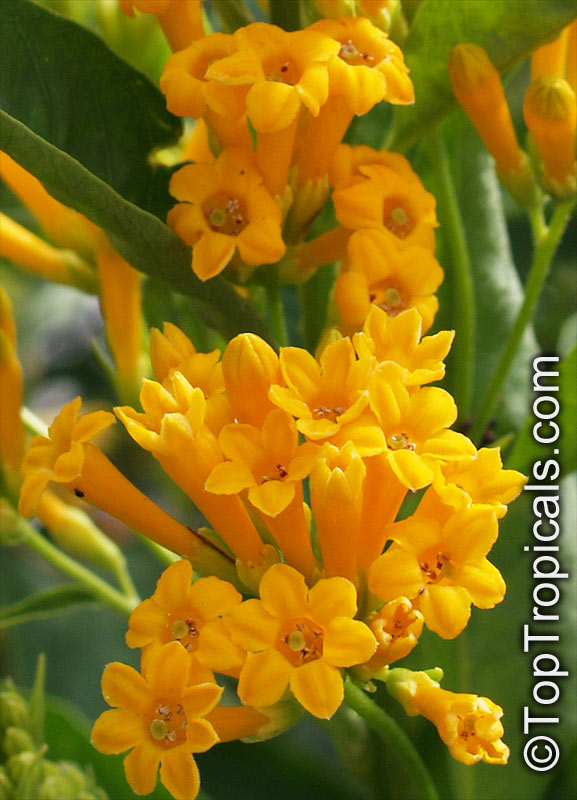 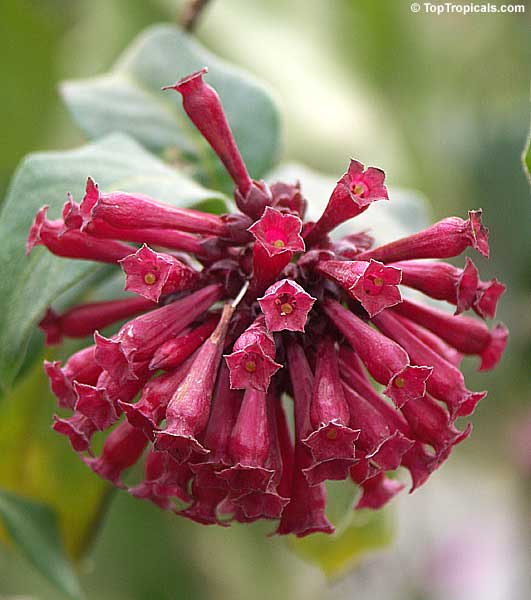 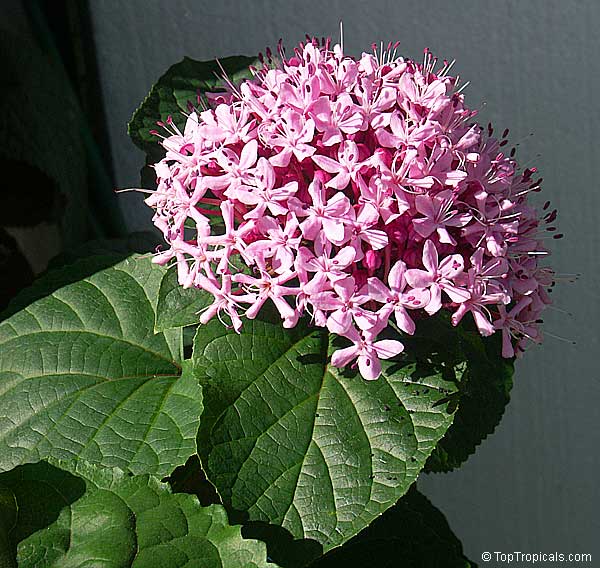 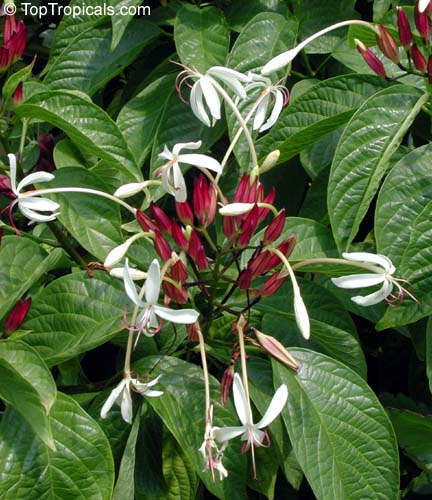 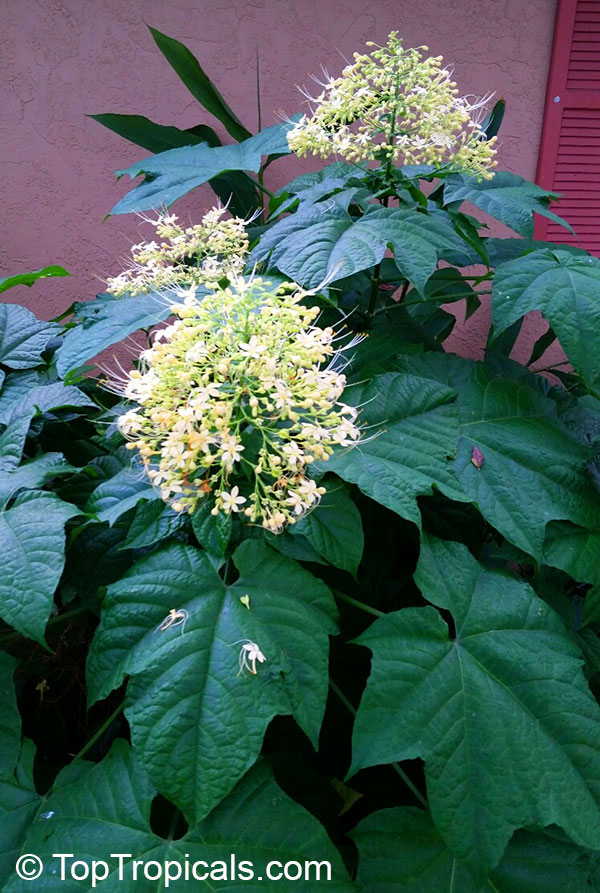 Pagoda Flower. Rare variety with off-white to yellow...  more
Clerodendrum paniculatum Alba - Yellow Pagoda Flower
Pagoda Flower. Rare variety with off-white to yellow flowers. This rare variety with off-white to yellow flowers is one of the most impressive flowers of Florida winter season. We have this plant growing in our frond yard under the oak, in shade, and it keeps blooming all winter long! This variety seem to be hardier and more vigorous than regular red variety. It is also very drought tolerant, we never water it! The plant produces lots of root suckers so it spreads with time, but this is the great feature for the location: it covered an ugly wall, and its lush large leaves are such a tropical addition to the landscape. Highly recommended for shaded locations that can use both color and green. 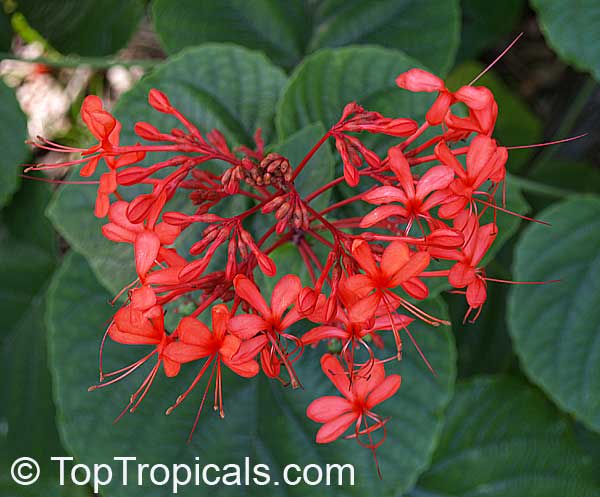 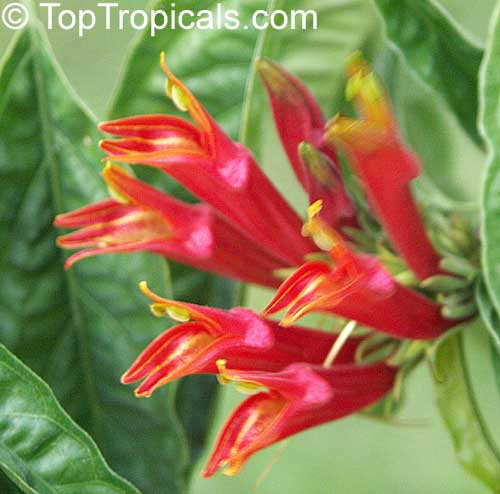 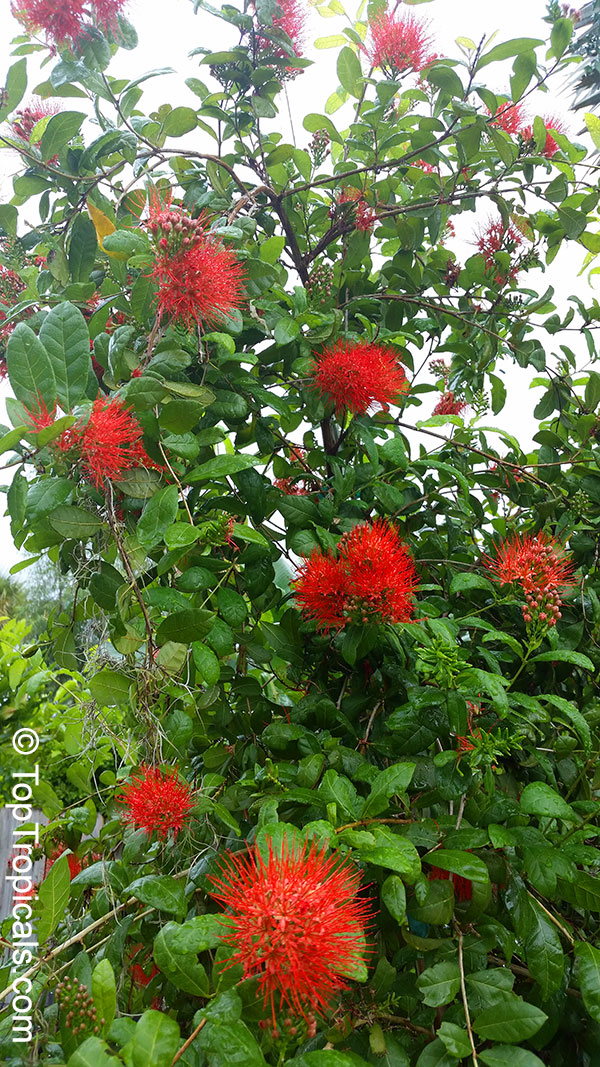 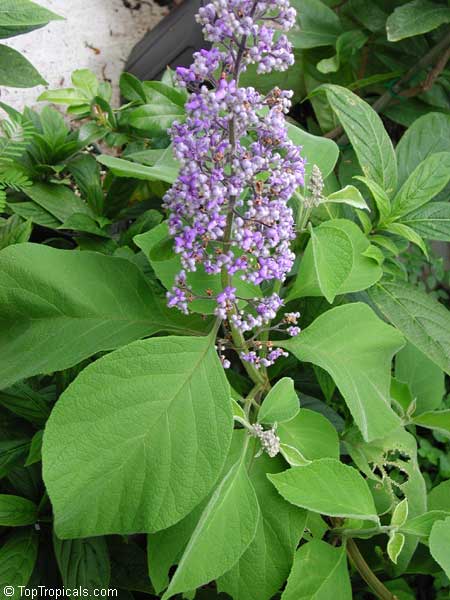 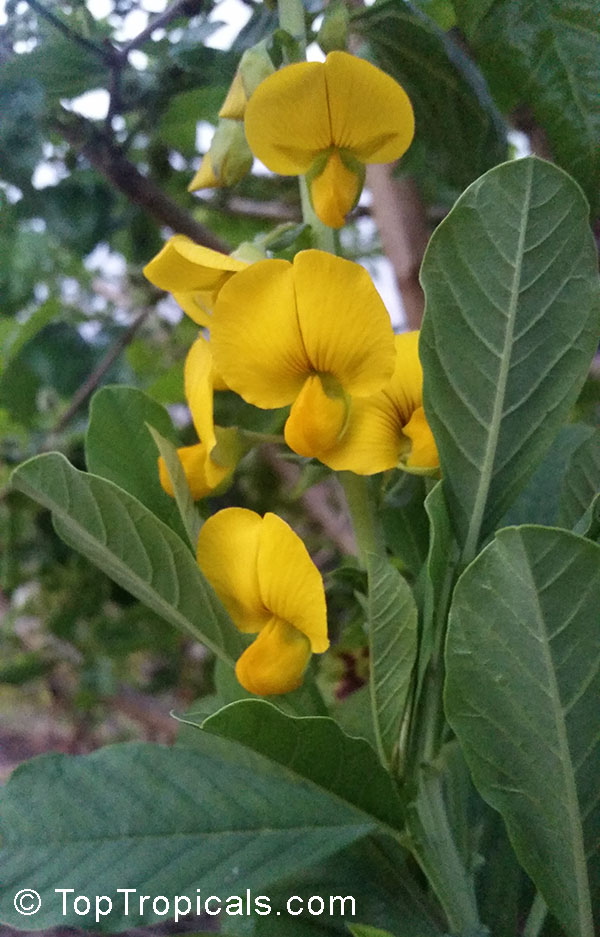 Devil Bean, Rattleweed, Shack Shack. This low growing...  more
Crotalaria retusa - Shack Shack
Devil Bean, Rattleweed, Shack Shack. This low growing relative of Cassias/sennas has spectacular yellow flowers followed by curios, balloon-like, rattling seedpods. It has beautiful lush foliage. Very easy to grow, not demanding and fast growing. Attracts butterflies and bees. The plant can flower year round.
This species has a symbiotic relationship with certain soil bacteria, these bacteria form nodules on the roots and fix atmospheric nitrogen. Some of this nitrogen is utilized by the growing plant but some can also be used by other plants growing nearby. The plant contains alkaloids and used medicinally in some tropical countries. The flowers and leaves have a sweet flavor and are edible as a vegetable. Their alkaloid content is very low. The roasted dehulled seeds are eaten in Vietnam. The roots are used against coughing. A decoction of the flowers and leaves is used to soothe a cold. 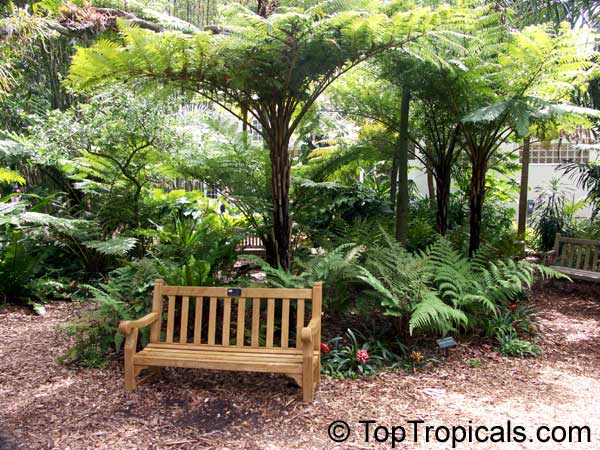 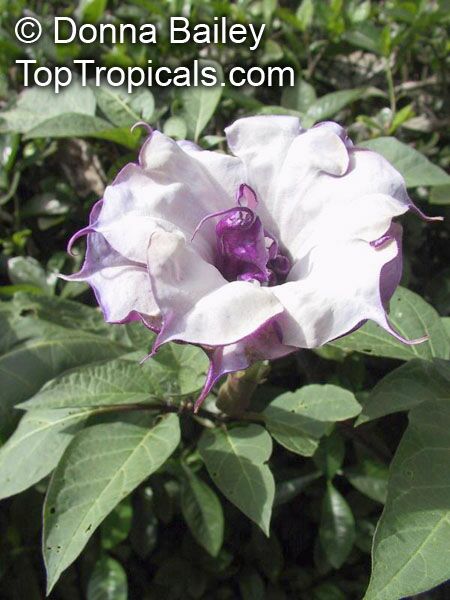 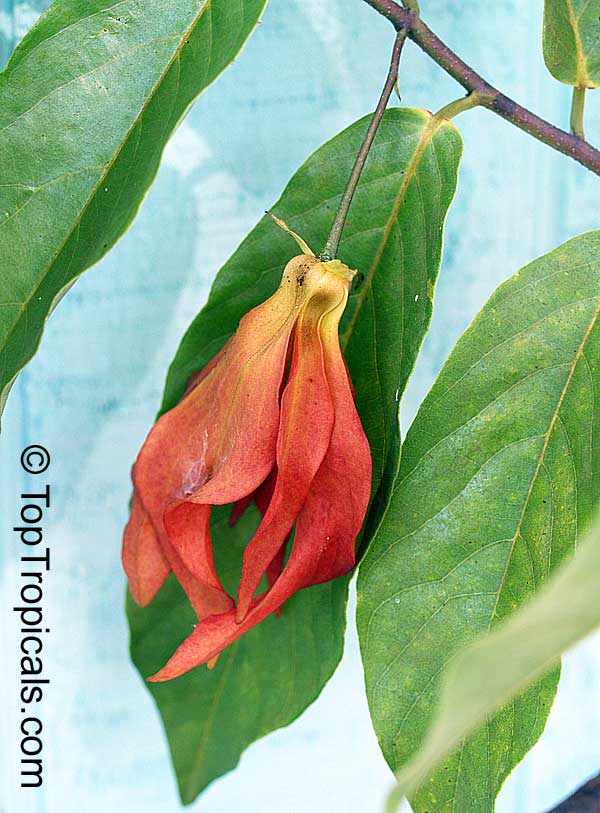 Shipped at customers risk, no replacements or refunds. Leaf drop possible. We guarantee healthy plant to be shipped and the best packaging. Express shipping optional. 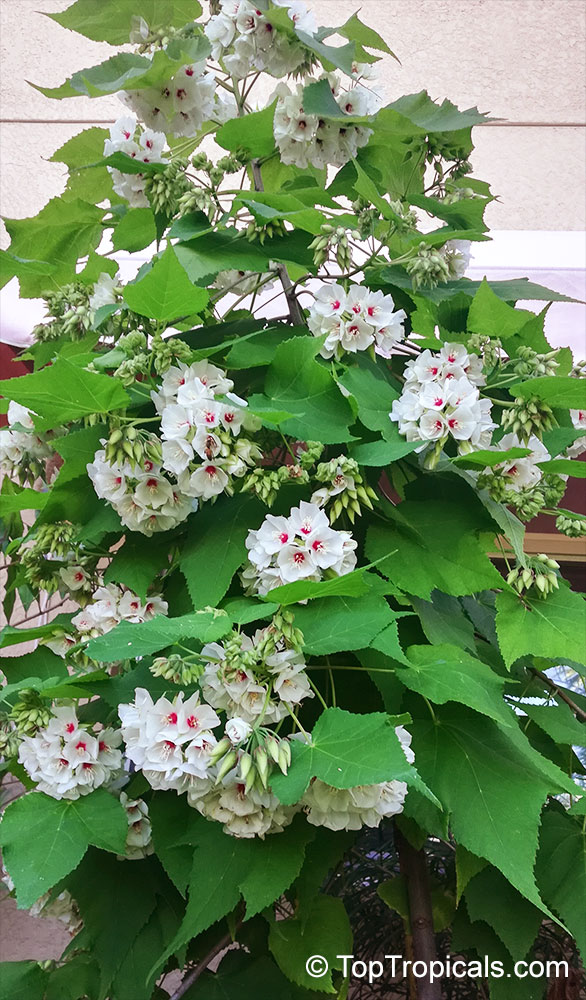 This new variety has flowers with fresh pleasant fragrance.
Tropical Hydrangea. Off-white to pinkish showy flowers in bunches during winter and spring. The large leaves are hairy, with shallow, maple-like lobes. Tolerant to both light frost and periods of drought. 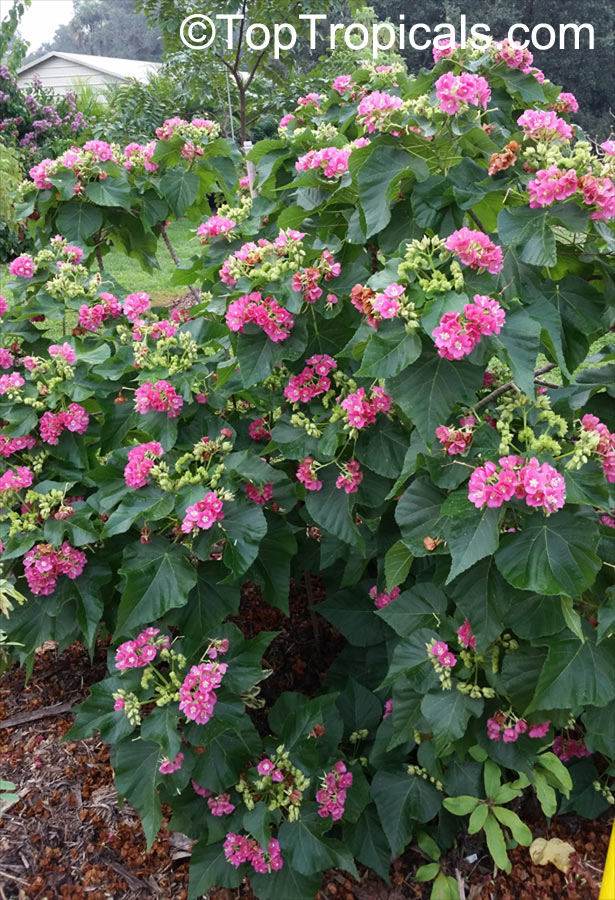 One of the showiest landscape plants! It is a real...  more
Dombeya seminole - Tropical Rose Hydrangea
One of the showiest landscape plants! It is a real showstopper, and a bonus of this already great shrub is that it will also do well in a container. And a happy surprise - it also serves as nectar plant to a large number of butterflies.
This winter bloomer puts on one of the best flower shows of any shrub here in Florida. It is sometimes called the tropical hydrangea because its flowers are similar to the hydrangeas we know from up North. The flowers are pink to rose color and bloom from fall to spring. That means it's blooming all winter in Naples during season, when the most color is desired and appreciated. Dombeya Seminole is a large shrub that grows 7 feet tall and about the same in width. It can be kept to about 5 feet tall with pruning.
This shrub will grow in full sun to partial shade and will tolerate poor soil. The more sun, the fuller the shrub, and that also encourages the maximum number of flowers. It is also fairly drought-tolerant once established. 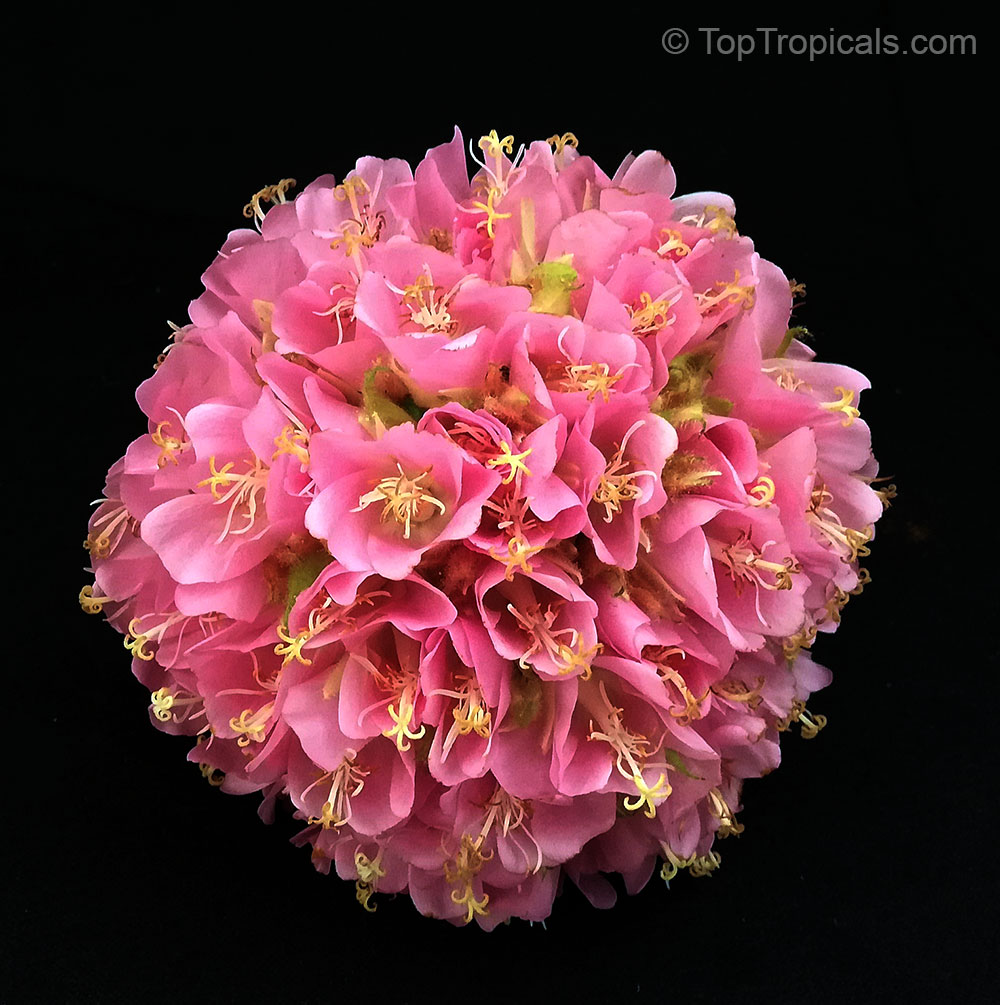 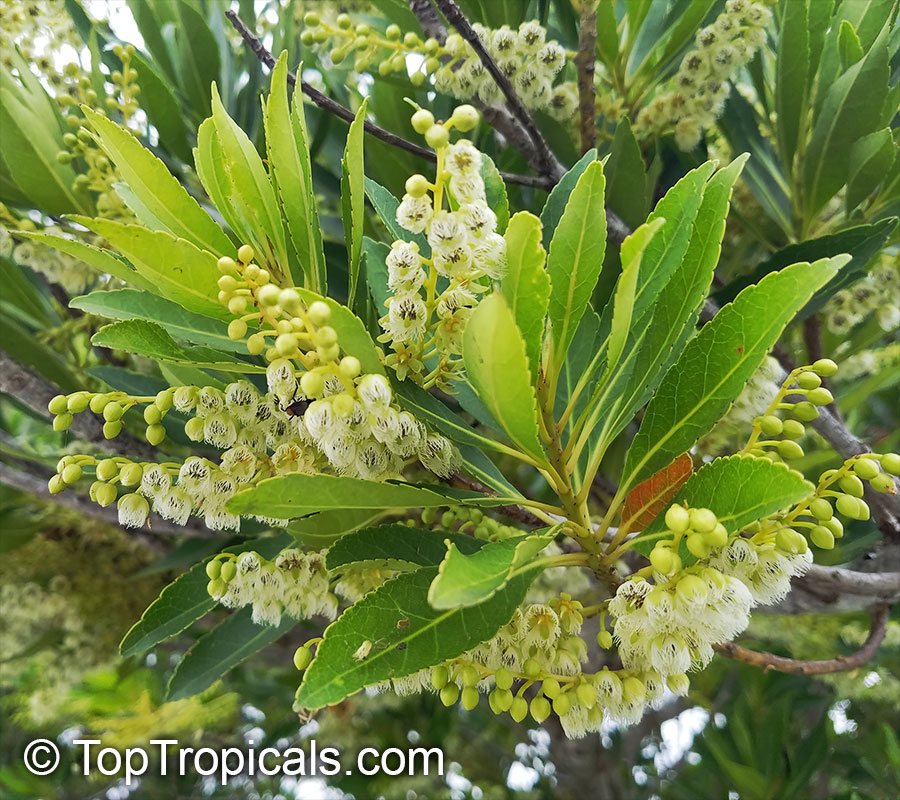 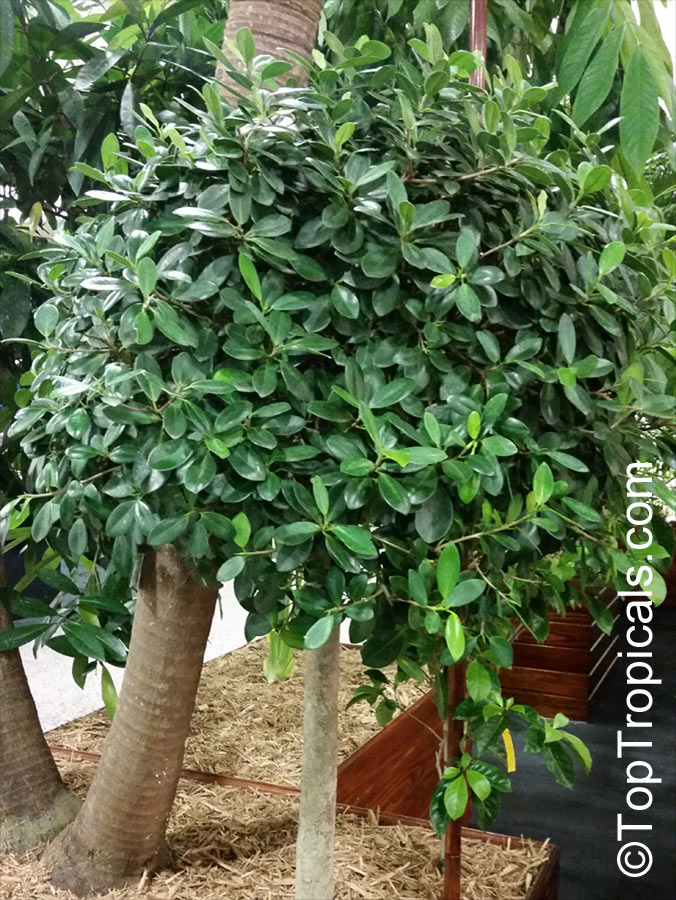 Ficus microcarpa var. Green Island has small round leaves. In can be grown as a mounding shrub up to 6-8 ft tall or ground cover: it spreads out sideways and is easy to train as a ground cover clinging to rocks or even trailing down a wall. This is a great plant for the "Black Thumb" person because once established it requires very little maintenance. It is an extremely slow growing plant, so it doesn't require constant trimming like many other ficus plants. It is great plant for indoor. It can take low light levels. It doesn't have a high water requirement so not to worry if you forget to water it once in a while. It grows very slow, so it doesn't need constant trimming. All of these makes it an extremely desirable plant for use as a tropical Bonsai. 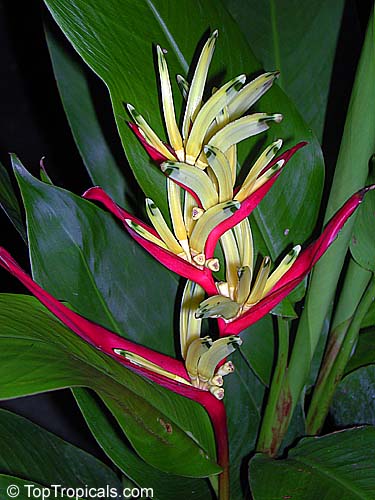 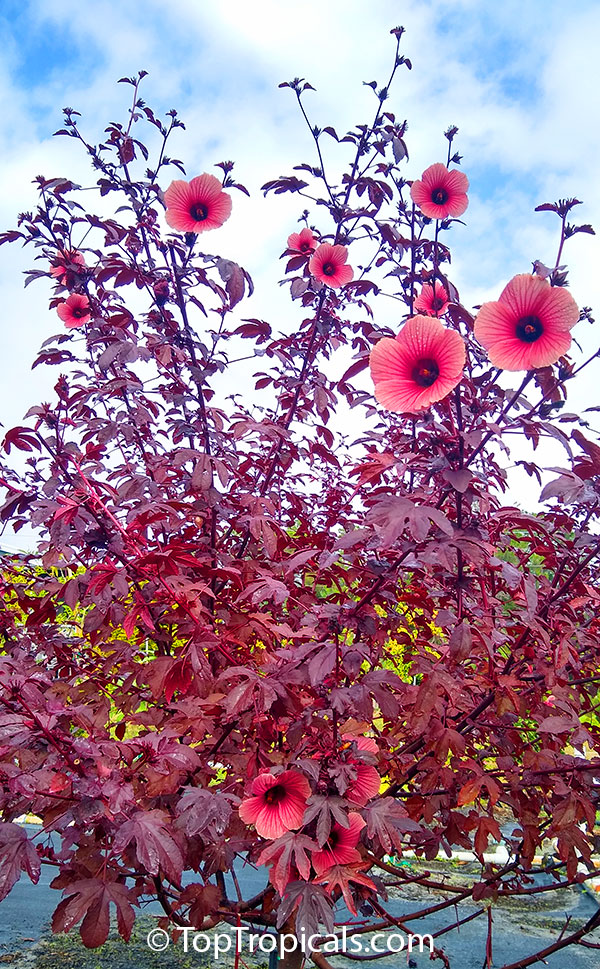 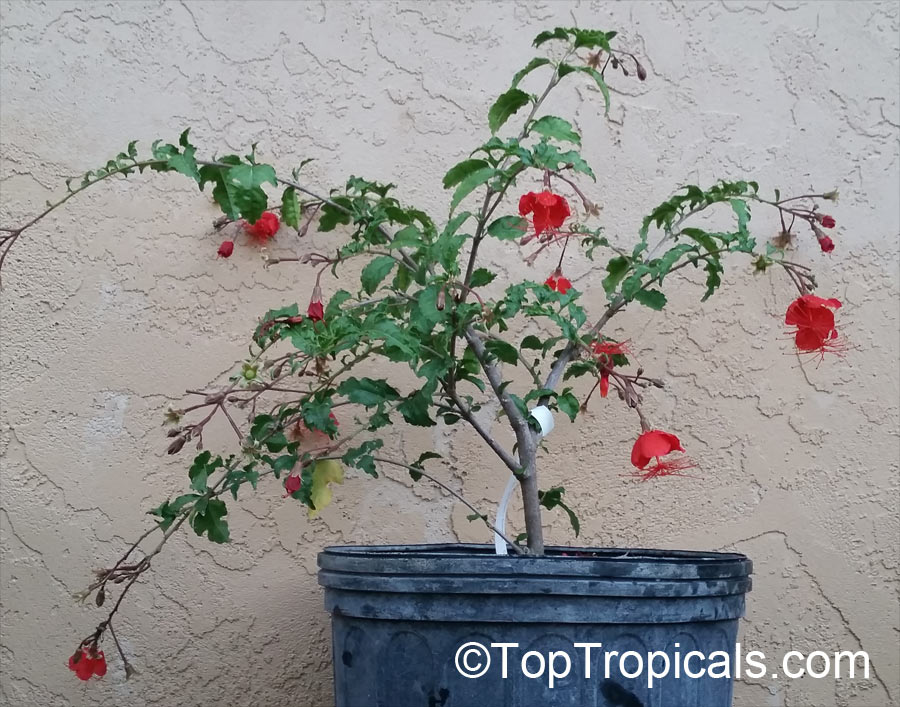 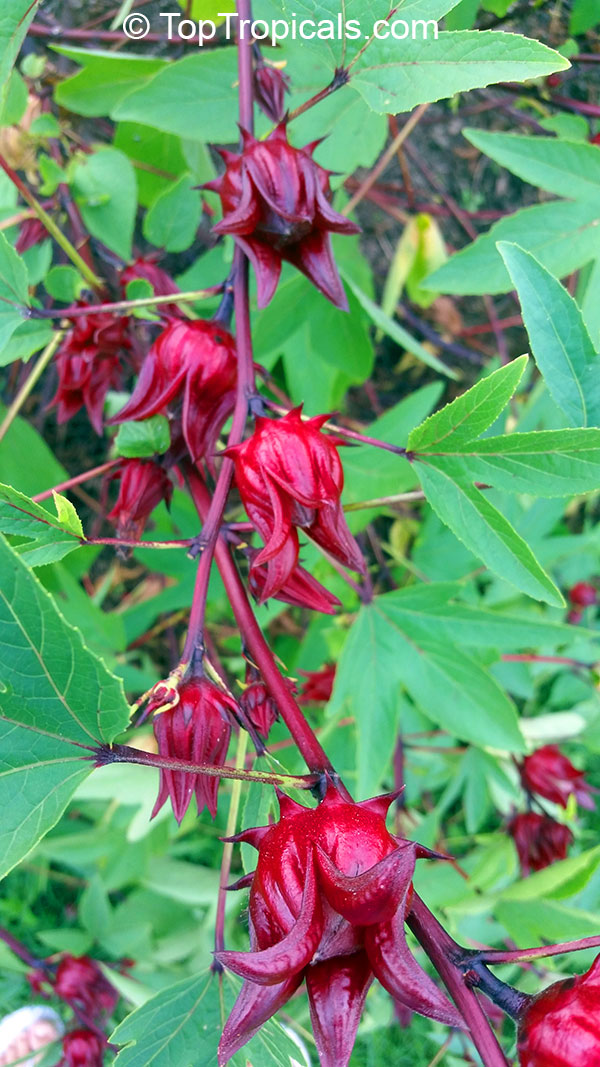 Jamaica Tea flower (Karkade, Roselle) - "Agua de Flor...  more
Hibiscus sabdariffa - Flor de Jamaica, Karkade
Jamaica Tea flower (Karkade, Roselle) - "Agua de Flor de Jamaica", also called agua de Jamaica and rosa de Jamaica, is popular in Jamaica, Mexico, Central America, and parts of South America and the Caribbean. It is one of beverages made from fresh juices or extracts. It is served chilled, and in Jamaica this drink is a tradition on Christmas, served with fruit cake or potato pudding.
In Panama both the flowers and the drink are called saril (a derivative of the Jamaican word sorrel).
In the United States, hibiscus tea was popularized as "Red Zinger". Flowers are used to make a cold or hot tea sweetened with sugar. There has been some Medical studies which indicate that it lowers high blood pressure and also has diuretic effects. The flavor is on the tart side similar to a cranberry juice. In Mexico, it is also used for granites, ice pops and sangria. 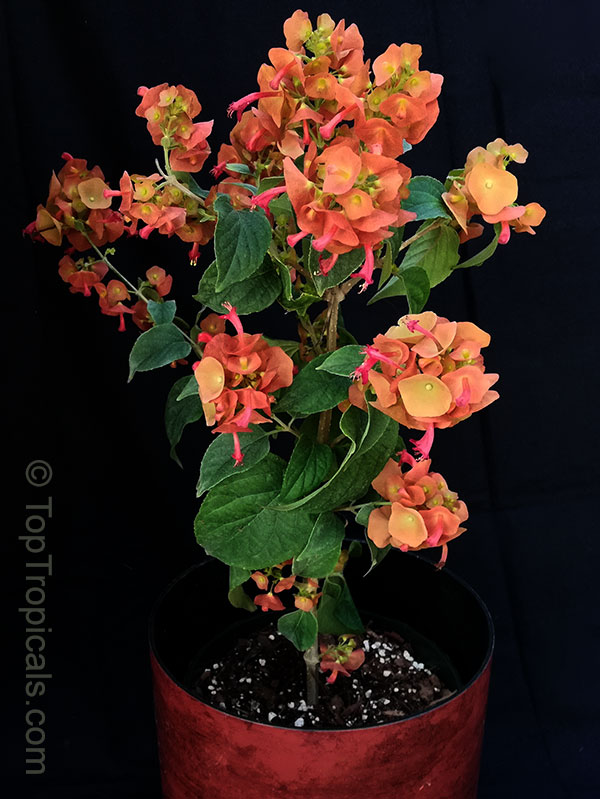 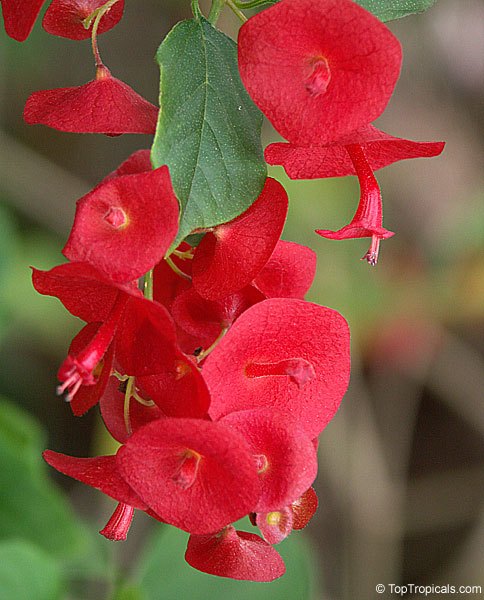