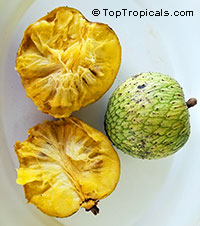 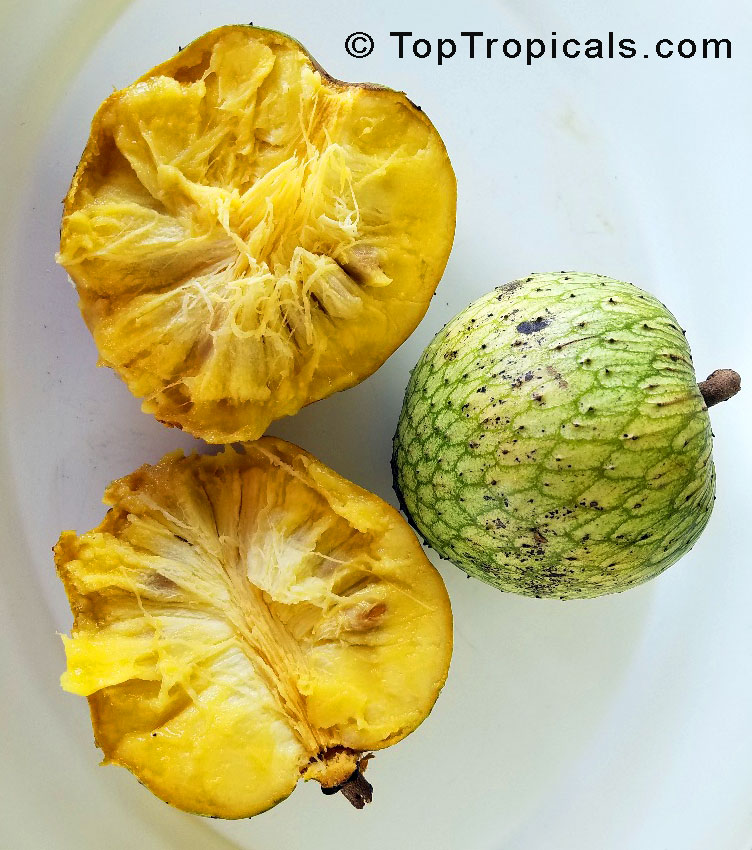 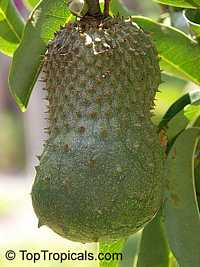 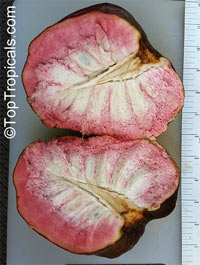 Large fruit with an opaque, light-red surface. The...  more
Annona reticulata - Custard Apple
Large fruit with an opaque, light-red surface. The flesh is dark-pink with a good aroma and taste. It is a vigorous, productive cultivar. This variety is above average quality and not gritty.
Red Custard-Apple. Very rare fruit similar to Sugar Apple. Bigger fruit with dark red skin and pulp, superior flavor. Erect growing tree, rounded to spreading. The fruit is 4" to 6" in diameter, roundish to heart-shaped to irregular. Flesh is thick creamy-white and custard-like. Red fruits sometimes have pink flesh or red lines running through the flesh. Season: Late Winter to Spring.

This rare Annona is a species originally brought to...  more
Annona sp. - Golden Sugar Apple, Pineapple Annona
This rare Annona is a species originally brought to us from Costa Rica. We believe it to be a natural hybrid between A. muricata and A. glabra.
It is a very ornamental, evergreen, small to medium size tree with waxy, large 4-6" leaves, similar in growth habit to A. muricata, A. montana or Rollinia. Fast growing, forms nice bushy specimen. It has a large, up to 1 lb fruit, green when unripe, turning dark yellow to orange on ripening. The pulp is golden to orange when ripe, with strong Pineapple scent, and resembling Jackfruit in texture. Flavor is like the custard apple but with pineapple, papaya, apricot and melon overtones. Note that some people dislike the taste, others find it good.
The treetolerates flooding. It is also cold hardy at least to upper 20's for a few hours. 3 year old trees survived several nights with frost with hardly any leaf damage. The plant would be very interesting for rare fruit collectors as it offers a large, exotic fruit of unusual color and taste, and appears to be much more hardy and water tolerant than similar looking but sensitive A. muricata, A. montana and Rollinia.
Propagation is by seed, which are grayish to light brown. If stored for several months, seeds may take up to six months to sprout. Trees produce after three to four years from seed. 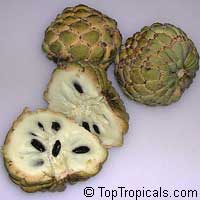 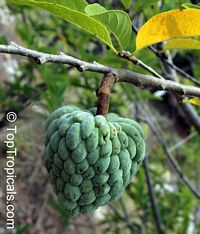 7 gal pot. This plant is grown in 7 gal pot, more mature than our standard size plants in 3 gal, has a more developed root system, and most of the time thicker trunk and more branches. However actual plant size may vary depending on the growing season and on variety. Dwarf varieties are slow growers and may be shorter trees than upright varieties. See a picture showing the relative size of plants grown in 3 gal and 7 gal.
You may contact us if tree height matters to you and we will provide you with more exact plant size we have in stock at the time. 7 gal plants may be shipped separately from other items by Ground service due to its large size. See here time in transit (business days, excluding Sat-Sun!)

1 plant in stock
Last one 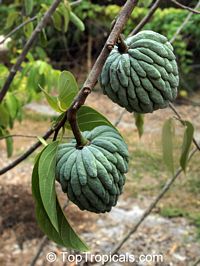