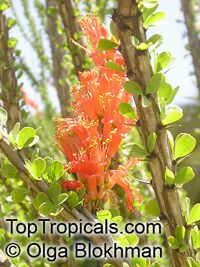 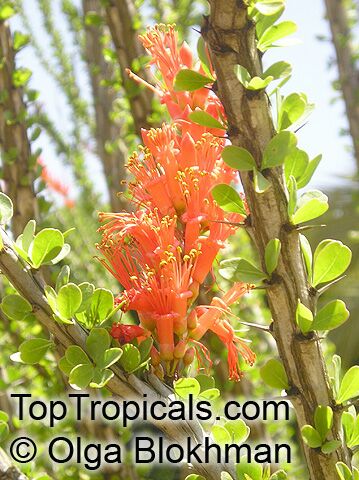 This slow growing deciduous shrub is indigenous to the Sonoran Desert and Chihuahuan Desert in the Southwestern United States (southern California, southern Nevada, Arizona, New Mexico, western Texas), and northern Mexico. The waxy tubular nectar-bearing flowers, produced in dense clusters at the end of the stems in the Spring, are attractive to humming birds, finches, bees and other insects. Later in the year, the flowers are replaced by clusters of decorative orange seed pods. Sporadic flowering can continue through the Summer and Autumn depending on rainfall. Ocotillo is not a true cactus. For much of the year, the plant appears to be an arrangement of large spiny dead sticks, although closer examination reveals that the stems are partly green. With rainfall, the plant quickly becomes lush with small, ovate leaves, which may remain for weeks or even months. The plant branches very heavily at its base, but above that, the branches are pole-like and rarely divide further, and specimens in cultivation may not exhibit any secondary branches. The leaf stalks harden into blunt spines, and new leaves sprout from the base of the spine. The bright crimson flowers appear especially after rainfall in spring, summer, and occasionally fall. Flowers are clustered indeterminately at the tips of each mature stem. Individual flowers are mildly zygomorphic and are pollinated by hummingbirds and native carpenter bees.

They should be planted to the original growing depth and, as with cacti, in their original directional orientation: the original south side of the plant, which has become more heat- and sunlight-resistant, should again face the brighter, hotter southern direction. If their direction is not marked, success is again limited.

Ocotillo plants prefer well-drained, sandy or gravely loam soil with low to moderate amounts of organic content. Ideal locations are sunny, open, unrestricted and those where surface water does not collect. Transplanted plants require irrigation to become established, but once established, they can survive on 8 inches of rainfall per year. Water infrequently to push it to bloom. The ocotillo has sharp spines, so it is better to keep it away from walking paths. 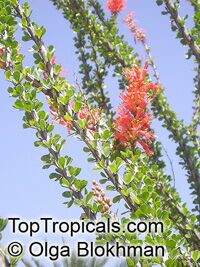 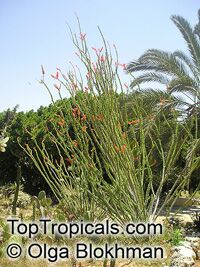 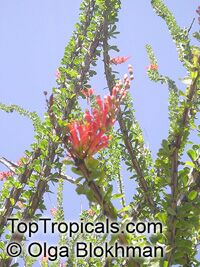 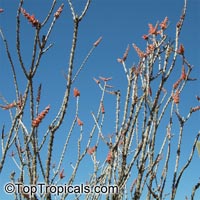 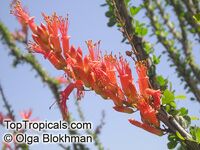 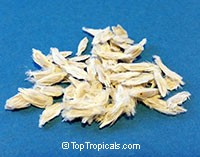 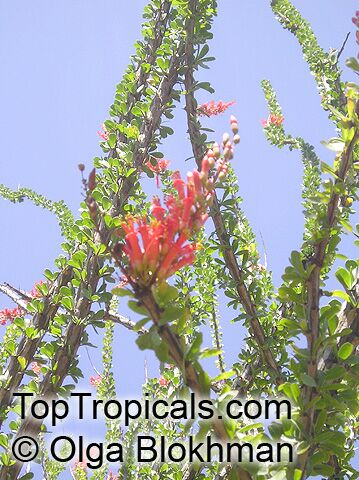 Per pack: 6 seeds
Notify me when available